Showtime’s Penny Dreadful was, for a while, one of my favorite shows on television. It was a unique, morbidly gorgeous series that reveled in all things gothic. The cinematography, art direction, and set design were all stunningly rendered and remain some of the most accomplished television work of the last decade. It was all accentuated, of course, by a brave and brilliant performance by Eva Green. Unfortunately, it never caught on in a significant way with the Television Academy. Perhaps it was too left field. Perhaps it was too gothic or dove too deeply into the aesthetic of the penny dreadful novels that inspired it. Whatever the reason, it was criminally underrated for its time.

Plus, it gave me one of my all-time favorite memes. 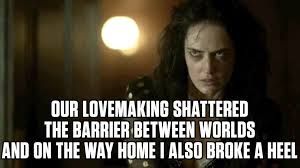 After cancelling the series at the end of its third season, Showtime returns to the Penny Dreadful franchise this year with Penny Dreadful: City of Angels. Set in late 1930s Los Angeles, the new series feels completely different than its predecessor. Where Penny Dreadful drew from the gothic horror novels of the late 1800s, City of Angels pulls from the hard boiled crime novels and noir films of the era. It does so by also taking a more modern inclusive slant on the story and cast. The pilot episode centers on a the conflict between Los Angeles growth and the Hispanic communities most directly impacted by it.

And, this being Penny Dreadful, it also features two sisters: one a supernatural demon (Natalie Dormer) and one the literal angel of death Santa Muerte (Lorenza Izzo).

As an upgrade from the original series, City of Angeles features more consistent, more nuanced acting. The style of the original Penny Dreadful mandated intentionally overdramatic performances, the kind of swooning and bodice ripping featured in the inspirational source novels. City of Angeles is more down to earth. Imagine a horror version of Pixar’s Coco mashed with Chinatown. As such, the performances are more subtle, more relatable. Nathan Lane, Daniel Zovatto, Kerry Bishé, and Natalie Dormer are all excellent with Lane the standout thus far – partially because it’s an uncharacteristically reserved turn for him.

But like its predecessor before it, the real stars of Penny Dreadful: City of Angels are the below the line crafts propelling the story. True, I do miss the gothic architecture and haunted theatres of the original series. But the costumes and set design of Angeles lovingly, brilliantly recreate the long-gone era of Los Angeles. In addition, it creates a unique look at the Hispanic neighborhoods and culture threatened by Los Angeles growth. The costumes, while not as wildly stylish as the original series, are great too. I suspect, given the closeness of this series to the Los Angeles-heavy membership of the Television Academy, Emmy voters will react kindly to the series. At least below the line. It took the original series until Season 2 before it made a stronger impact, but I think familiarity with the Penny Dreadful world will treat this new series more like a sequel than a new series, which the Television Academy can be notoriously difficult to embrace.

I’ll hold final judgment on the series until I’ve seen the whole thing, but I will say that I do miss the iconic presence of Eva Green. Dormer is a very talented and beautiful actress, but she doesn’t yet command the eye like Eva Green did despite playing four roles within the season. You literally could not take your eyes off Green, and the series suffered when she wasn’t on screen. Perhaps Angels will benefit from a more uniformly balanced cast.

Until then, smart money goes on below the line crafts for Emmy love.