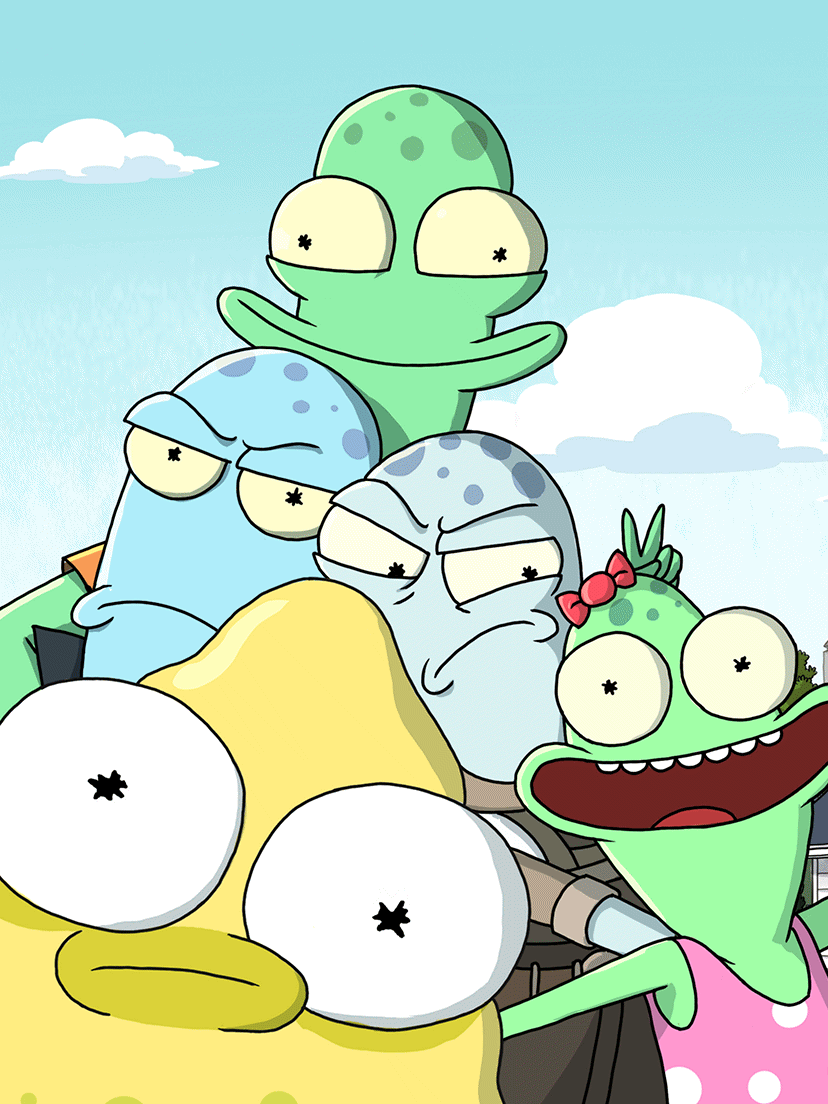 From Rick and Morty producers Justin Roiland and Mike McMahan comes a new sci-fi high concept animated show that doesn’t quite hit the heights of their previous work but has some genuine laughs. Adult aliens Korvo (Justin Roiland) and Terry (Thomas Middleditch) and their replicants, Yumyulack (Sean Giambrone) and Jesse (Mary Mack) respectively, had to flee their home planet along with a Pupa (a small blob that is kind of like a pet but has some hidden purpose best not shared) when a meteorite destroyed their home planet. While they were supposed to head to an uninhabited planet, they crashed on Earth (literally into a house for sale that they now own, with the ship sticking out of the roof) and have to deal with living on Earth.

The fact that they are aliens is not hidden from anyone on Earth. Some kids bully Yumyulack and Jesse for being different, but for the most part no one cares even when the alien technology affects the human world. The humor comes from how much they understand Earth and the dynamic between the aliens. Korvo is the smart one who claims to hate Earth while Terry is much more easy going but also not as bright, which taxes Korvo. Yumyulack and Jesse act like brother and sister and even refer to themselves that way. They deal with trying to be popular but have alien science and biology that aids or hinders them depending on the situation. There is also the Wall, a huge set of tunnels full of humans that Yumyulack has shrunk because they have annoyed him, who have created a whole new culture.

Going into this I had no idea that this was made by people connected with Rick and Morty. But within minutes of seeing the animation style and hearing Korvo’s voice, I knew the style of humor we were going to get and that had some pluses and minuses. Like in Rick and Morty, violence is used a lot, with alien technology going amok and several humans murdered. But while life is cheap in the Rick and Morty universe, there is still some sense of stakes and horror to what happens. Here it happens so often that it loses its impact, especially since it never seems to affect the aliens’ lives. No one is coming for them even though they are not hiding what they are doing, and they seem not to care that they are killing people either accidentally or on purpose. It is never clear why they are so indifferent.

The show fares better when it moves away from these extreme moments and lets the comedic timing of the cast and the animation do its thing. There is a running gag from the beginning of the show where Korvo tells us the plot during the opening credits but ends with him saying different things about why he hates Earth that are always so random. The inflection that Justin Roiland brings to Korvo’s lines always sells it.

The dynamic between the aliens is unclear at first. We are dropped in with them all living on Earth but what they all think of each other or of Earth is not made clear. We jump into the first adventure and it feels like we are missing a step somewhere. But as the cast is given time to develop it starts to become funnier. Commentary about Earth through the alien’s eyes becomes more developed through fast visual jokes and quirky dialogue that you may miss if you do not pay attention.

If you do not like Rick and Morty, then it is doubtful that this show will work for you. If you do like it, this will not be a completely one-to-one love, but it is a show that grows on you. I found myself wanting to see more of this lighthearted watch that was easy to get into and created a curiosity about what else was going to happen. With more time, this could definitely develop into something even more interesting.

Number-wise it will have difficulties. Long time nominees and winners The Simpsons, Bob’s Burgers and South Park are all in contention again this year. Bojack Horseman broke in last year and is now in contention with its final season that stuck the landing and is a heavy critic favorite. Big Mouth, which also got in for the first time last year, is still telling challenging and funny stories about kids dealing with puberty. Then there is the fact that Justin Roiland and Mike McMahan have their other show, Rick and Morty, airing the second half of the fourth season on May 3rd, which also won this award the last time it was eligible. This is a very crowded field and Solar Opposites may not make the impact needed to take out these already well-known contenders.

Emmy Spotlight: Will 'Dead To Me' Breakout in the 2020 Emmy Season?