The National Geographic series features a stunning, full-scale recreation of a period-authentic village in its pilot episode.

National Geographic’s new limited series Barkskins completely immerses its viewers into the late 1600s world of New France (or as we better know it, Canada). Based on the sprawling novel by Annie Proulx, the series stars David Thewlis and Marcia Gay Harden in a story that explores, in part, the impacts of colonization on the environment and indigenous population. The complexity of the very early period locale required an eye extremely focused on both a visually pleasing aesthetic and one that accurately recreated the era.

To achieve this daunting task, series creator and executive producer Elwood Reid chose production designer Isabelle Guay. Guay’s resume includes production design work on Tom Clancy’s Jack Ryan, Pawn Sacrifice, and Bad Santa 2. But it’s her supervising art director work on the Oscar-winning The Revenant that perhaps best highlighted the great extent to which Guay would go to recreate the late-1600s Canada. With Barkskins, Guay created an incredibly vivid and period-authentic environment in which the actors can tell this vast story.

But the main inspiration for the look of the series did not stem from prior experience. Instead, Guay focused on something as simple as light.

“Light was my inspiration, how it interacts with the subject. I researched a lot of different types of light in nature – in the deep forest or by the rivers,” Guay shared. “To me, it was essential that, in the design, we treated light well to support the drama of the series and of the period.”

The series whenever possible used natural lighting in its interiors, sourced both from windows and from candles or open fireplaces. Dutch-Canadian painter Cornelius Krieghoff’s early Canada work and additional artists provided a significant depth of inspiration of what life felt like for French settlers in that era. Guay leveraged a combination of art in addition to early photographs to create this world. Given the importance of lighting, she collaborated extensively with series cinematographers to ensure the interior and exterior lighting would accurately reflect period living conditions.

Much of the Barkskins pilot takes place in Wobik Village. As cast members arrive by boat, they’re welcomed by the gruesome site of a giant tree protruding from the water and littered with the bodies of indigenous Iroquois. It’s a jarring, terrifying image that instantly communicates the intrinsic danger of settling in an uncharted land. 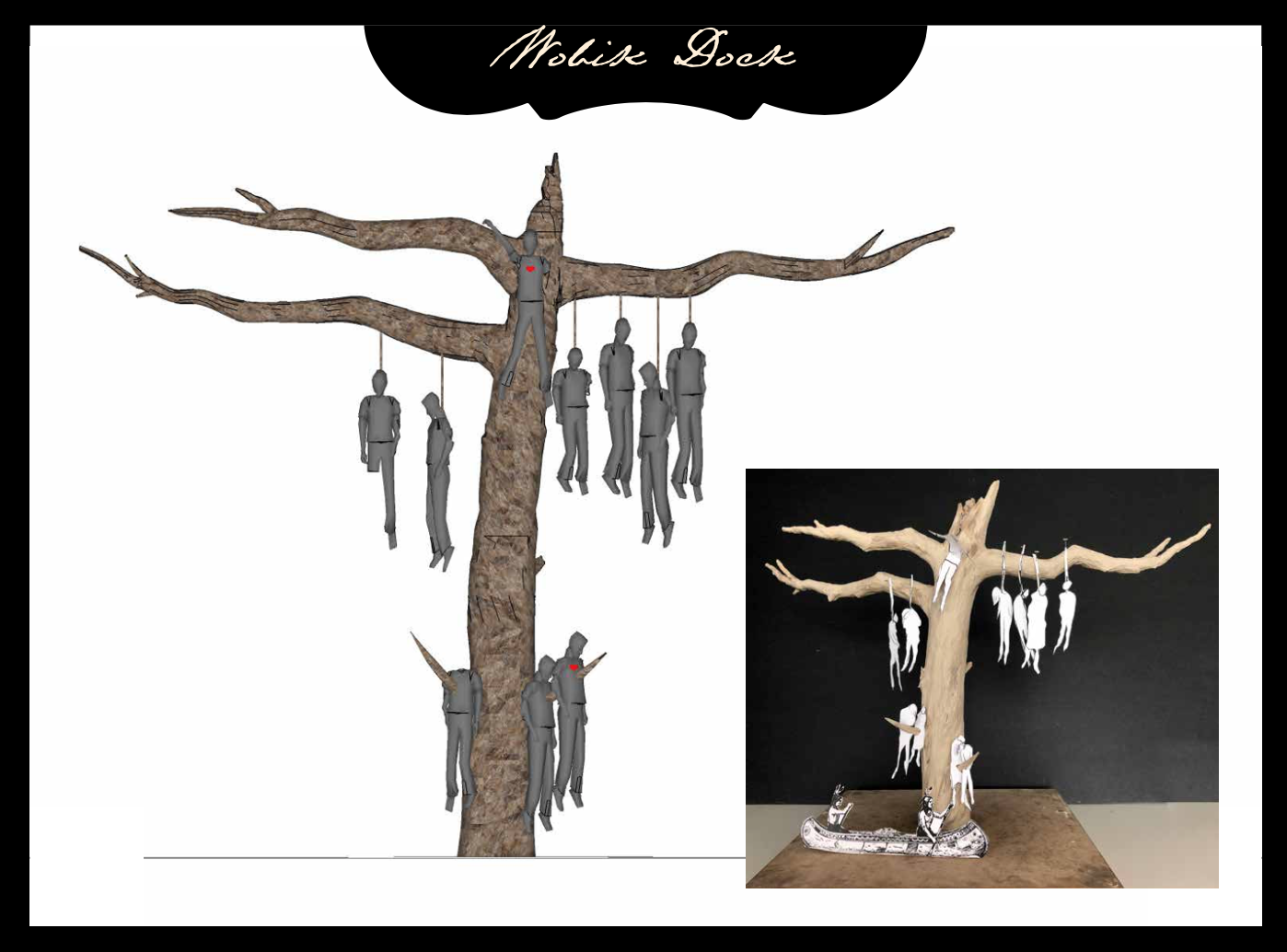 The tree serves as a warning to visitors of New France that, after a challenging and terrifying journey across the Atlantic, their fears are just beginning. The tree provides a message as to the danger of the local environment, animals, Iroquois as well as the very elements themselves.

Beyond the tree, Wobik Village itself is a full-scale vision of an early French-Canadian settlement. Built in the small Quebec town of Saint-Gabriel-de-Valcartier, this 17-century village is marvel of production design expertise. Looking at its designs, you can see the careful consideration that went into fashioning Wobik Village. You know where the butcher’s house is, where the cemetery is, and what a visitor would see as they walked through the village’s main gate. 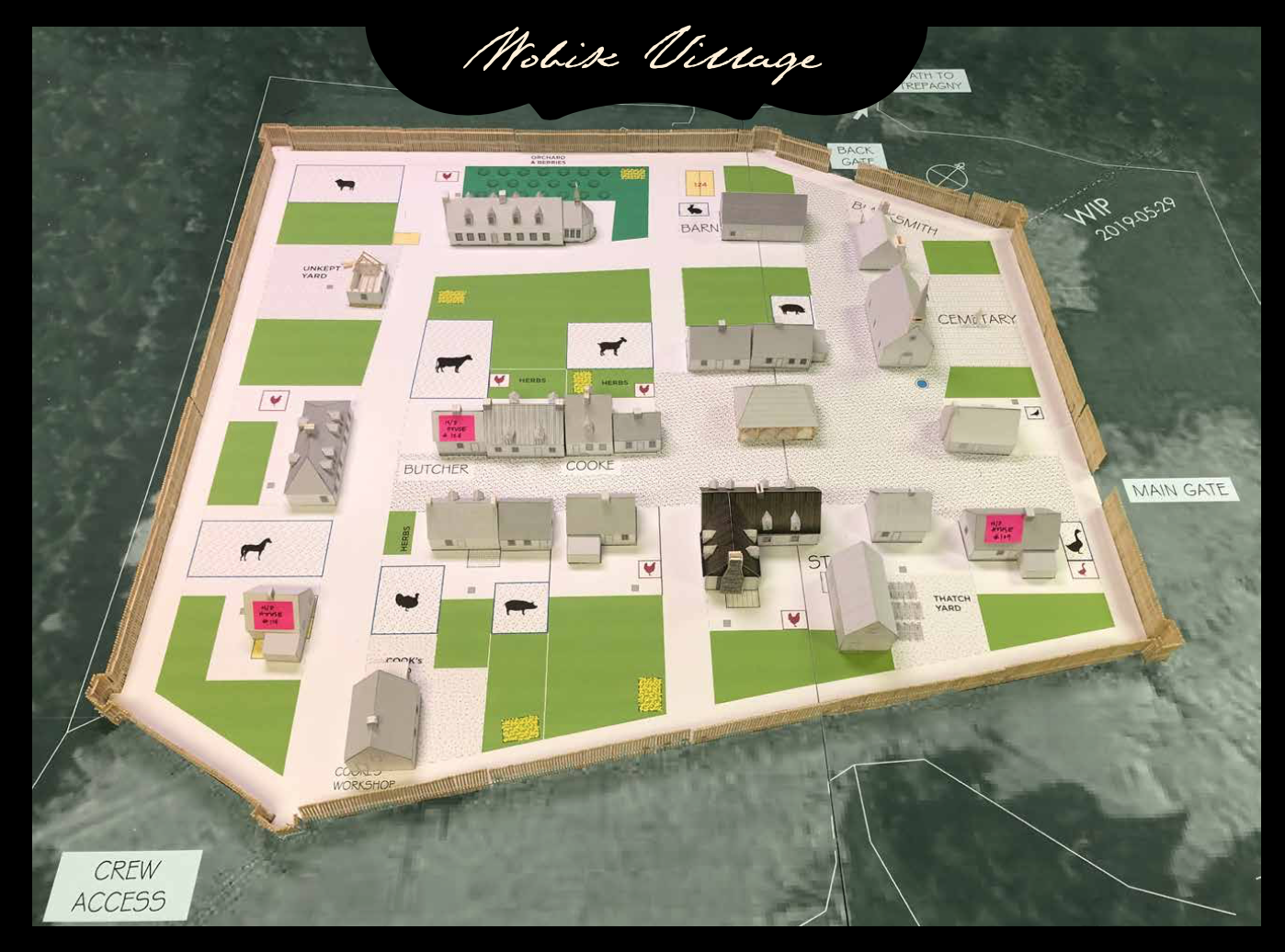 It wasn’t just a handful of buildings here and there. It was a full recreation of a village as you see in the 17th century. To achieve such realism, Guay conducted intensive research to guide her on such basic choices as the size and age of the village, the two main driver’s of her overall vision.

“Since the village was in every frame, that’s where it gets challenging,” Guay described. “We took the script and described all of the scenes we knew would take place. Where are the actors going? Where are they coming from? What route would they take between the buildings?”

The characters’ paths through Wobik Village necessitated an interesting visual story to accompany the onscreen drama. Each angle needed to look different as it would in reality. Each building required depth and texture, illustrating its appropriate age, and needed to accurately reflect the light as Guay’s original inspirations for the series required. Even casual glances through windows in interior scenes reward the viewer with additional context.

Talk to any production designer, and they’ll quickly remind you that their job is not just to design sets or locales critical for filming. They also have to consider the look and creation of every gun, knife, spoon, fork, blacksmith tool or pot and pan. It’s a painstakingly elaborate process that requires extensive research to assure the required period authenticity. All of it on a reasonable budget too.

“It’s a big challenge! We were very lucky that, here in Quebec, we have a lot of antique shops. We also have a lot of craftspersons with the knowledge in creating objects the traditional way. We had a great blacksmith that worked with us. There was also a basket weaver next to our location who created all of our baskets for real. The prop master contacted several people in the United States who recreate objects specific to the American Revolution period, which is so close to the period we needed. Plus, there was a sale of pelts used in The Revenant. Those furs and pelts were perfect for our period, and we loaded up trucks with them.”

Those objects came to the production team much easier than originally anticipated. That challenge paled in comparison to the original challenge the series presented – finding the appropriate locations in which to construct this Barkskins vision. Original location scouting happened during a Quebec winter. If you’re unfamiliar with Quebec winters, then everything is still blanketed under eight feet of snow.

“I felt like a French settler in the 1600s. They had to envision the needs of their village, and explore the possibilities of the land around them,” Guay recollected. “We needed to consider where the light would hit and where the rivers would give good access. Once we received an approval on the location, there was still three feet of snow on the ground, and we had no idea what was under it.”

Guay remains very appreciative that Reid and team trusted in her vision and thrilled that the sets turned out exactly how she envisioned them. She helped create an incredibly visual world we don’t often see in American television. Barkskins is a stronger limited series because of it.