by Joey Moser
in ADTV, Interviews
0

Netflix’s Cheer became a sensation because of the athleticism of the Navarro Cheer Team and because Arielle Kilker didn’t make the story only about winning and losing. There is a nail-biting performance at the end of this 6-part documentary series, but you wouldn’t care about the team if you didn’t like the students or coach Monica Aldama.

Kilker is all over Cheer. Not only did she produce the show with Greg Whiteley and Chelsea Yarnell, but she took on directorial duties for one of the season’s most pivotal episodes, and she was a supervising editor. Her husband, David Nordstrom, also served as a supervising editor, and they tag-teamed the series together. “I’ll give a piece of advice to anyone who is working together with their spouse: Commute separately,” she said with a laugh.

As this squad hurtles towards their performance in Daytona, Florida, we learn more about the members of the team. Everyone wants to meet the beam of light that is Jerry Harris. Morgan Simianer shared the struggles with her family. Lexi Brumback needs the squad to keep her on a straight path. Yes, the tumbling and the sheer athleticism of these young people will make your jaw drop, bur Kilker makes you terrified to see them fall and makes you root for them to nail every single step.

You have her to thank for your new obsession.

Awards Daily: Cheerleading has a lot of stereotypes surrounding it. Was combating those images one of the reasons why you created Cheer?

Arielle Kilker: We learned very early on in the research process that cheerleading was much more than people thought it was. While I was working on Last Chance U in post-production, we saw what we were able to do with that show. It’s a sports narrative but it opens the door for so much more exploration and gives the opportunity to tell stories that have nothing to do with football. I wanted to do that for a female sport. Greg Whiteley and my producing partner Chelsea Yarnell had started filming the cheerleaders at the school where we were shooting Last Chance U and we saw in the footage how incredible the cheerleaders were. The lightbulb just went off. There is so much to explore there.

AD: I didn’t know that the majority of the film crew were women. How did that help highlight the stories of the young women of Navarro?

AK: We were very intentional about that when we were hiring. One of the most important things, as filmmakers, is making sure that we can be intimate with the subjects and have access and all felt comfortable both physically and emotionally. We talked about how to film them and we found two incredible female DPs, Melissa Langer and Erynn Patrick, who were instrumental in making everyone feel that comfortable.

AD: I feel like a lot of media focuses on the outward appearance or objectification of cheerleaders, but Cheer really celebrates the strength and the athleticism of these young women.

AK: Something that was always a goal was to just not have a sports narrative but tell the story of these people. Whether it was the young women on the team or the young LGBTQ+ athletes on the team, we wanted to make it as complete [as we could] in telling their stories.

AK: Totally. You could strip away the elements of the story and you are left with something incredibly dense and complex. We found that so much of what Cheer is about is how young people cope with trauma. We were constantly looking for something bigger when we were in the field. What we found early on that we weren’t aware of was what trauma some of these young people are dealing with.

AD: It was unexpected to hear Morgan talk about her family or Lexi to open up about how much the program really helped guide her.

AK: And part of the reason why audiences are really attracted to Cheer and why it was so impactful…I’ve received a lot of messages from people thanking me for making this show to explain how they’ve thought a lot about it and they didn’t know there were people with similar experiences. What’s become so obvious now that the show has become so popular is that there are so many people like Lexi or Morgan or LaDarius who have had these experiences but their stories haven’t been told before. We’ve found this group of people who are underrepresented in the media, and it was such a privilege to share their stories with the world. I am grateful to the Cheer team and the staff for allowing us to share them with the world.

AD: And that goes along with how Cheer shows a lot of young, queer, people of color as well. We almost never get to see that.

AK: Absolutely. I think part of the reason why cheerleading is such a safe haven for the gay community is that it’s not just accepting, but it celebrates performance and confidence or, like they say in the cheering world, sassiness. These things are encouraged, and it’s part of the sport. It’s part of the competition to be your confident self. It’s a beautiful place for a lot of these young men to flourish and find themselves.

AD: The first time I saw LaDarius performing, I thought, ‘That is the most confident person I’ve ever seen in my life.’

AK: Yes, there’s so much about the cheerleaders that was intimidating. (Laughs) 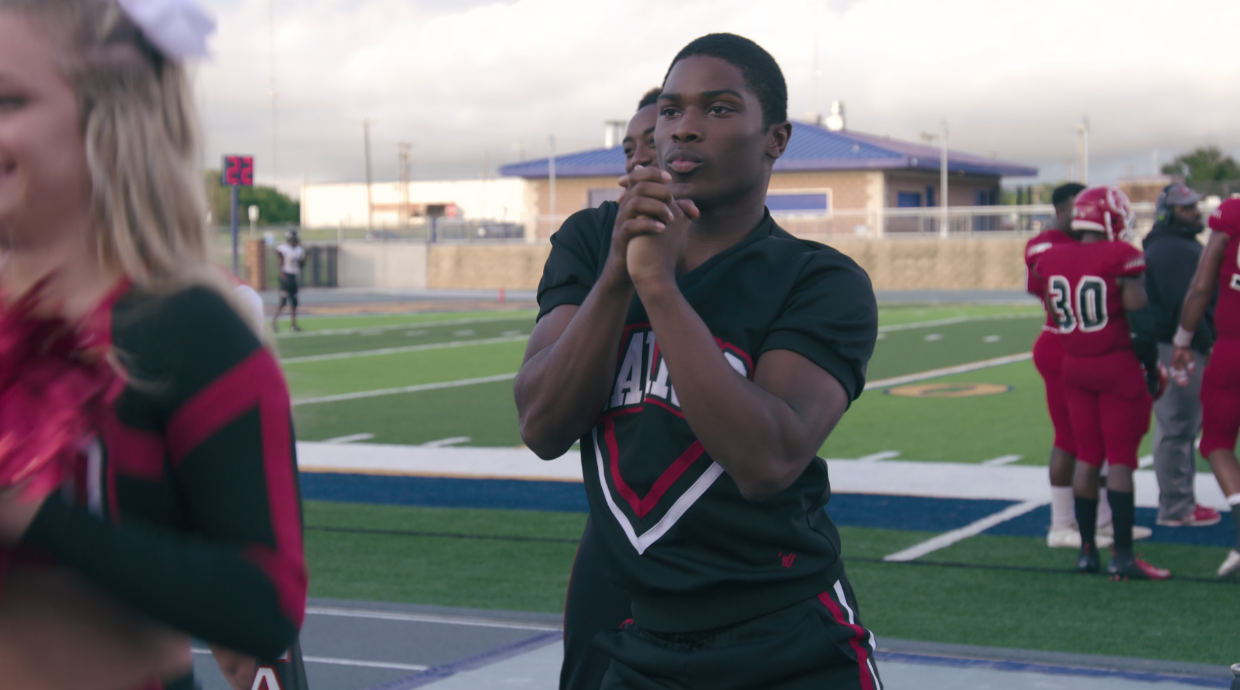 AD: You co-directed Episode 4 with Greg. That’s a very pivotal episode because the team has to maneuver cheerleaders around after injuries, and it’s very stressful for them.

AK: It was a really big episode, and it was also one of the most difficult to edit. I was the supervising editor on the whole series, so my fingerprints are sort of all over Cheer.

AD: Yeah! When I saw your credits for this, I thought, ‘Well, this is definitely her show.’

AK: It was Lexi’s story, and it was something we were definitely very careful about from the minute we heard about it in the field. We found out about the online harassment that she was experiencing the same way the audience finds out. While we were filming that, we realized that this was a really big thing for a really young person. We wanted to be careful and intentional with every move that we made. We followed Lexi’s lead. At some point, she became extremely brave and she decided to step up and shame the people who were trying to shame her and took it to the police. One of the most important things that we have as filmmakers is that we are taking good care of the subject. In the post-production process, it was no different. As I was editing that, I put in a little Easter egg for Lexi, to let her know that we were thinking about her while we were telling her story.

AK: I put her favorite song at the end of that episode to let her know that the same girl that she was hanging out with in Texas that she trusted with her story is the same girl who is putting her story together and sharing it with the world.

AD: I want to talk about the editing. Did you want to not show the entire, final routine until the very end? Kind of like not seeing the shark in Jaws until you need to?

AK: Definitely—especially editing a documentary series where you have a continuous story across six episodes. You have to dole out information in a way that’s interesting and engaging while keeping everything fresh for the audience for the duration of the series. That was something we talked about a lot—we didn’t want the audience to get ‘routine fatigue.’ There is a such a thing as seeing something too many times and a lot of their practices are very repetitive. It was a constant give and take of what stage are they at in the routine. We wanted to give them the final glory of performing it at Daytona.

AD: The film crew wasn’t allowed to film at the competition, so it was compiled of cell phone footage. That finale is insane.

AD: I need to know everything. Did you have an immediate thought of how you were going to do it? What was it like when you found out?

AK: Being there was definitely the most intense 2 minutes and 15 seconds of my life. I was right along with them. It was stressful not knowing if we were going to film the event. There was a lot of back and forth. When we got to Daytona, we understood what the apprehension was from the company that runs the event. They were concerned that having a big film crew with boom mics and equipment was going to be too distracting to these teams. These are teams that are competing with razor thin margin of error, and they wanted to protect the community of cheerleading. We could understand that. Everyone has cell phones though, so it worked out.

AD: I do think that Cheer’s presentation of the routine is the best version of it out there. The one on ESPN can’t hold a candle to what your show does.

AK: I think we really lucked out with the power of teamwork and crowdsourcing. I wouldn’t change anything if I could.

AD: If you go back to this world for a second season, would you approach it in the same format?

AK: That’s a good question. I think documentaries are going to be very strange moving forward. Almost all documentaries that were in production when COVID-19 hit will end with maybe a title card that explains that they couldn’t finish. All the documentaries that start when the world opens back up are going to have to kind of start with how people are adapting to this new situation. You can’t ignore it.

Cheer is now streaming on Netflix.

HBO's Noired Up 'Perry Mason' Gets a Trailer