by Kevin Dillon
in ADTV, Interviews
0 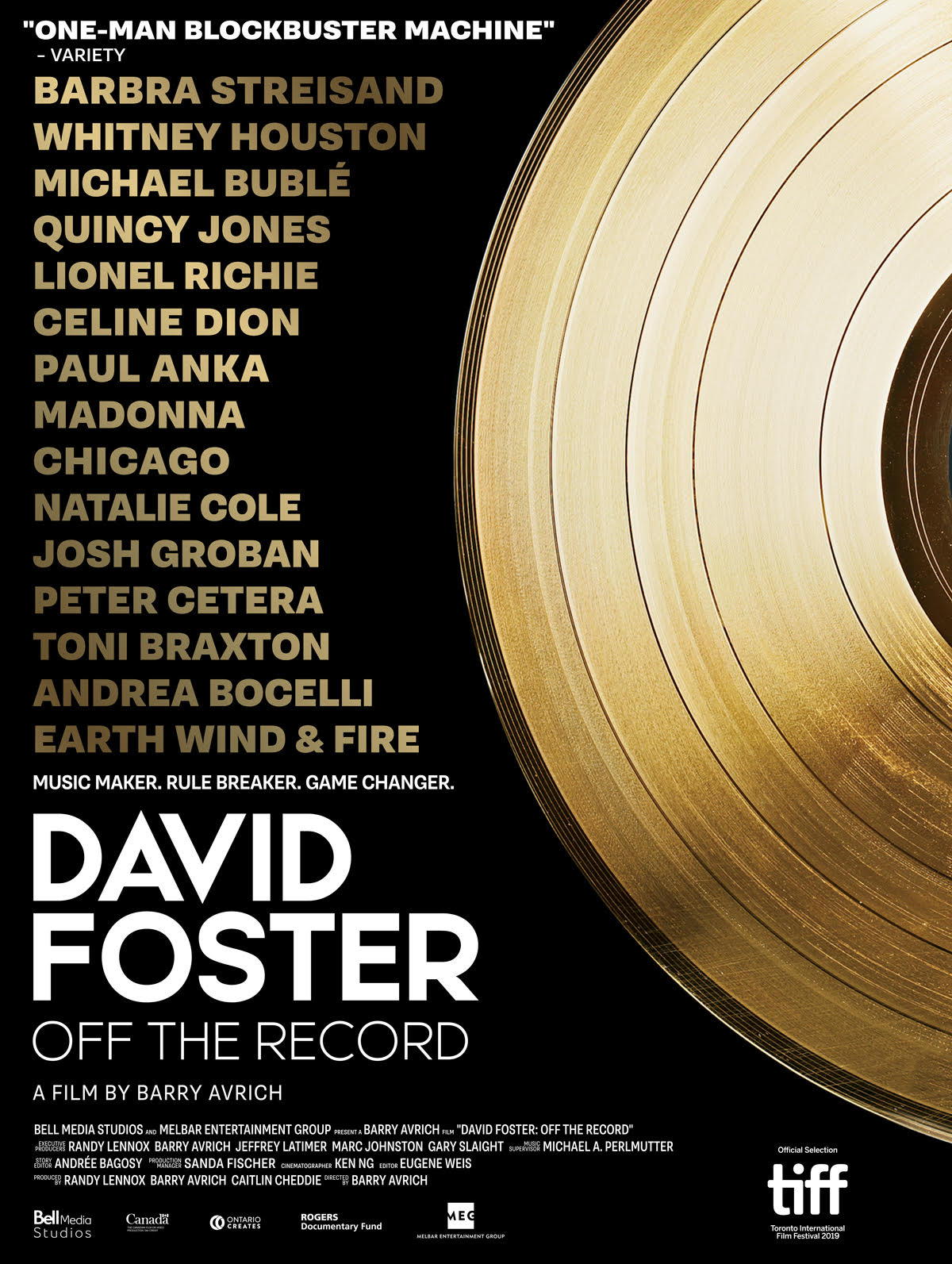 David Foster is an icon. He has worked with tremendous talent throughout this career from Barbra Streisand to Whitney Houston to Michael Bublé.  This man has the golden touch and stands behind so many of our favorite songs. I decided to watch St. Elmo’s Fire for the first time last evening to celebrate Joel Schumacher. As the film started, I said to myself this music sounds familiar. I know this. It was David Foster music.

David Foster has shown up in various other aspects of popular culture, including reality television, but you know his music. You know his sound, and the film David Foster: Off the Record tackles everything. In this film, which will drop on Netflix on July 1, you will get a glimpse into the life of who David Foster is, where he came from, and the legacy he built. He is one of the people who has created the music of our lives.

I had the privilege of speaking with Off the Record‘s director, Barry Avrich. He correctly pointed out David is not only a legend in the music industry, but he is also a legend in the entertainment industry.

Awards Daily: David Foster owns this in the documentary, and as you hear this from family, he has not opened up in this way before. What work did you do with him in order to build a relationship?

Barry Avrich: I think everybody wants some form of legacy. A lot of what people know him for is his reality television personas. He wanted to share his legacy within the music industry, and talk in more depth about where he came from, and his journey in the industry.

It was not an easy evolution to make the film. I was an unknown person to him. We had to develop a courtship. I I think in show business people are not used to being called out. In the interviews I did with David, we did five interviews for multiple hours each. If he would not go down in depth on things, then I would challenge him to answer and go as deep as possible. I am sure he has been asked these questions, but a lot of this was not something he had out out there before. I essentially said to him we have  to go much deeper and explore more of your relationship with your father’s death, the relationship with your family, his relationships to your artists.

One of the most challenging aspects for David was he did not have final cut, so this process was a new experience for him, and I wanted to honor the man while exploring his legacy. I agreed to show him the film but did not give him final cut. David flew to Toronto to screen the film with me. When the lights came up he was extremely emotional. There were parts that were tough for him to watch, but it worked for him, and I think we were both proud of the product although we did end adding more.

We showed the film at TIFF last year, and it received positive acclaim, but, I was still not happy that there were times where it did not go deep enough. He agreed to re-shoot those scenes. He also allowed access to Katharine (McPhee) who then talked about what worked with them and what did not work. Most celebrities are afraid to explain their flaws. David has the whole equation of the film and music industry in his head. He was a willing participant in the end, and he wanted to go deeper and make the film work. This will be a film that is around a lot longer than him, and he wanted to share this experience.

AD: Two key things in this film involved legacy and vulnerability for David. How did you shape these aspects in your narrative of the documentary?

BA: One of the other ingredients of this film explores involves this fact that Canadians have this doubt of what their success will be and what it would be, which resonates with the success David was always working to achieve. I think that David thinks the “artists of today” would not come to him, but I spoke to those “artists of today” and they would absolutely come to him. They know he can make a hit. I think David still thinks he has not done enough or reached that point with his career. If Lady Gaga would have brought you “Shallow,” you would have said yes, and it would have been incredible.

When it comes to legacy, David has such a cinematic approach to what the audience wants. Every song has a big moment, and he always imagines a standing ovation in his music. I wanted a couple moments where we played music in the studio for him. I saw this technique in 20 Feet from Stardom, and I wanted to see David’s reaction to some of his own music. I wanted to show the impact his music has on not only him but people in general. Sitting with him in his condo and the recording studio, when he would sit at his piano and play. I did not want to miss a moment with him, so I always had my camera rolling. I do not know many people like David who own the room and are entertainers like this.

My own father said to me, ‘Watch the audience when you watch a movie. You want to see if the movie is losing the audience.’ Every time I am editing and pacing the film. I do that in my own work. David does too, and it shows. His legacy is this incredibly cinematic music that often gives you that standing ovation.

AD: The man is a legend, he has worked with Streisand, Celine Dion, Stevie Wonder, Whitney Houston to name a few. What do you think he would say is the crown jewel of his work?

BA: There is no question the Whitney Houston songs in The Bodyguard changed his life. This song was written by Dolly Parton and covered by countless others, but he took this to a whole new level.

David also took Bublé to a whole new level. David created a whole new lane in the music industry. There was Sinatra, Harry Connick Jr. but David was able to make this brand new artist in a modern era who could sing standards incredibly popular. He took a kid he heard at a wedding and turned him into an industry giant.

AD: I think one of the most fascinating pieces of the documentary involves the push and pull David had with changing the sound for the band Chicago.

BA: I was a Chicago fan during the David Foster era. There are Chicago devotees who thought David did them wrong. I think if it had not been for David, Chicago would not be where they are today. David gave Chicago a new lane and gave people that big symphonic sound. Every artist evolves, and I think it would have a huge error for them to not to evolve. David made them a legacy. If you look at Prince or some other artists who evolved, all artists experimented, some work and some do not.

We went for dinner at Craigs in LA, and David owns the room. Every producer artist graviated to their table to get advice, to ask him questions. He is incredibly generous. He can also be reclusive, stubborn, and I think this part of the film shows everything about who David is. He wants to create a fantastic musical experience.

AD: I love the way you interspersed David’s personal life throughout the documentary. You got a sense of who David is/was throughout his life. Talk to me about this part of the process, and delving into his family life?

BA: He had five daughters, five sisters, five wives. If you think about all of this mixed with a career, it was very difficult for him to do that and talk through that. I had just finished shooting his daughter Amy one day, and I conveyed what she said. You are going to have scar tissue with all of my children. The family section of the film is tough for him every time. He admits that he should have apologized and learn to say ‘I love you’ versus ‘Love you.’

AD: I also love that you got to add aspects of Katharine and David’s relationship. I believe tabloids speak to relationships without authority, but you showed an authentic representation of their love. Talk about involving her in the film.

BA: I did not know her other than from American Idol. The fact that she walked in the Gramercy Hotel and she was so grounded and real proves exactly who she is as a person. She challenges him, and you see on camera that she evaluates how they are together. He does feel that she has made him a better person. She is accomplished, and the relationship is incredibly lovely. There is that one moment where they are singing together at the piano, and you see the beauty of that closeness. They have found language through their respect and admiration for music and each other.

AD: My favorite moment in the film is when David states he wants to win an EGOT. I think this speaks to his drive and captures a big piece of who he is and what he wants to accomplish. How does this help speak to David?

BA: You can’t walk into his place without seeing his 16 Grammy Awards and Golden Globe. That moment came out of nowhere, but I do respect his determination and candidness. I respect the fact that he can conquer new industries. David will be successful on Broadway. He just understands show business. For me to sit with him and show him a cut. To show him this film and knows the industry, and for him to like this. He wants new worlds to conquer, and wants to tackle new industries

AD: Ben thank you for your time today, is there any last nugget you would like to leave us about David or the film?

BA: In the end, I made a film for people who love music and the music industry. This is a sit back and look at a person’s great life and what they have accomplished film. I think people will get that from this film.

David Foster: Off the Record will drop on Netflix July 1.