< Building Community and Charity Over a 'Saturday Night Seder' - Awardsdaily - The Oscars, the Films and everything in between.
No Result
View All Result

Building Community and Charity Over a ‘Saturday Night Seder’

Before similar events materialized, Saturday Night Seder was something of a COVID-19 first. Independently produced as a streaming Passover Seder, Saturday Night Seder brought together dozens of actors, singers, religious representatives (all Jewish and non-Jewish alike) to share the experience in a communal way no longer possible due to the mandatory and extremely necessary COVID-19 quarantine. In addition to enhancing a sense of community, the event raised to date over $3 million for the CDC Foundation’s Coronavirus Emergency Response Fund.

It’s a remarkable, collaborative effort that brought joy into many viewers’ lives at a time when people were facing the absence of a very family-oriented holiday. 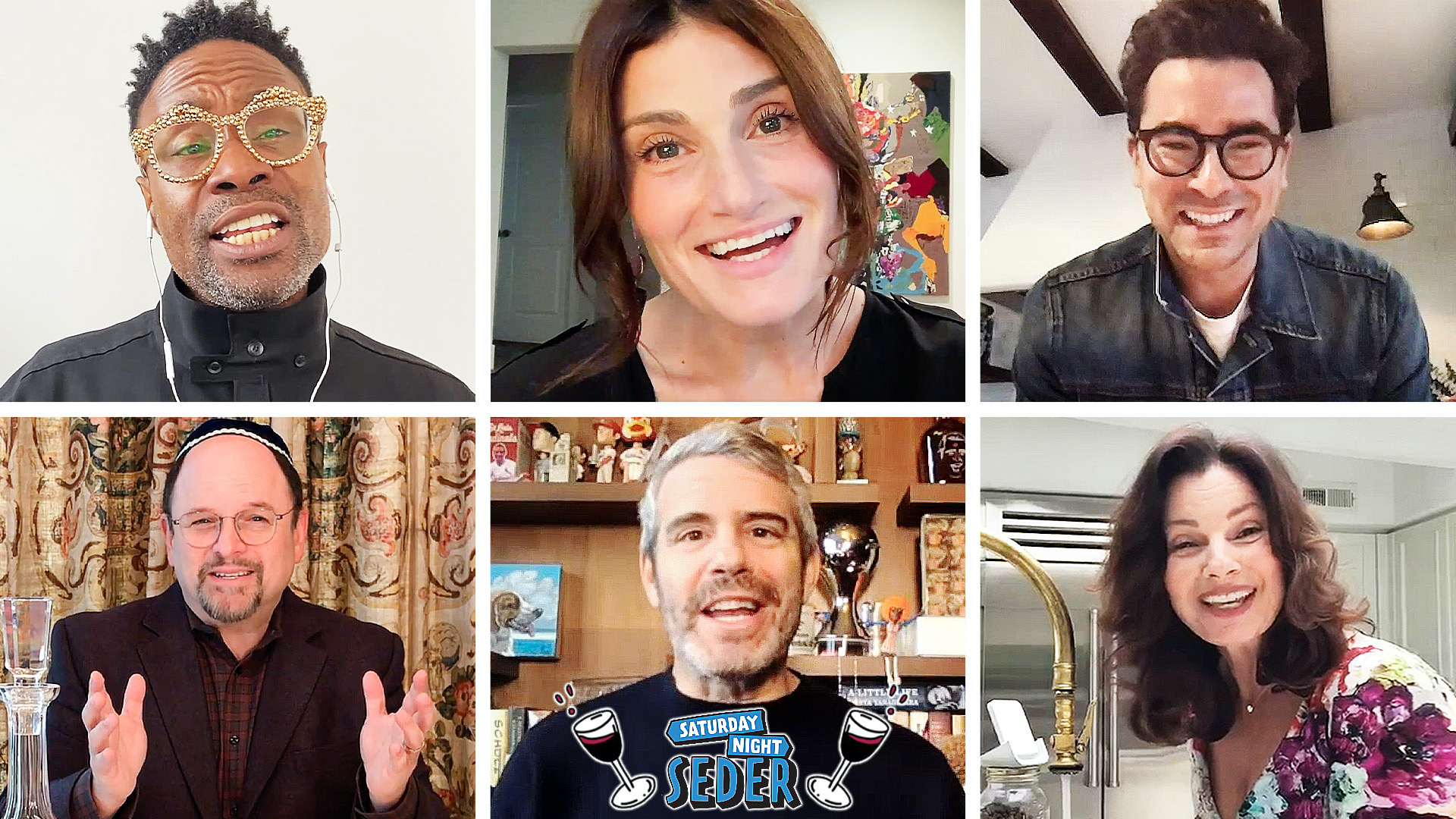 “Passover, in particular, is the holiday that Jewish people consider their number one holiday, and it was something that a lot of people were going to definitely miss,” co-Executive Producer Benj Pasek shared, “but it’s also a universal holiday across religions in the sense that it’s about the telling of this story that goes from being a slave to being free, being confined to finding liberation, going from winter to spring, all the while taking place during a plague. It felt to us that, of all the stories we could be telling, this was one we wanted to amplify.”

For those (like me) not in the know, the Passover Seder is a traditional Jewish feast that marks the beginning of the Jewish holiday of Passover. The Seder also involves the telling of the story of the liberation of the enslaved Israelites in Egypt, a story recalled in the Book of Exodus in the Hebrew Bible. Given the traditional togetherness and close quarters typical within a traditional Seder, Pasek, co-Executive Producer Adam Kantor, and Head Writer Alex Edelman among many others decided to collaborate and conduct a virtual Seder. One that would not require breaking quarantine at such an early, critical stage in the COVID-19 lock down.

The intent of Saturday Night Seder was not to evangelize Judaism, according to Pasek and Edelman. Rather, it was to use the base story as a launch point to share the wisdom, knowledge, and hope reflected within the Passover Seder experience. The overall intent was to focus the material to both Jewish and non-Jewish audiences (who Edelman refers to as “Passover Enthusiasts”), which posed a unique writing challenge. 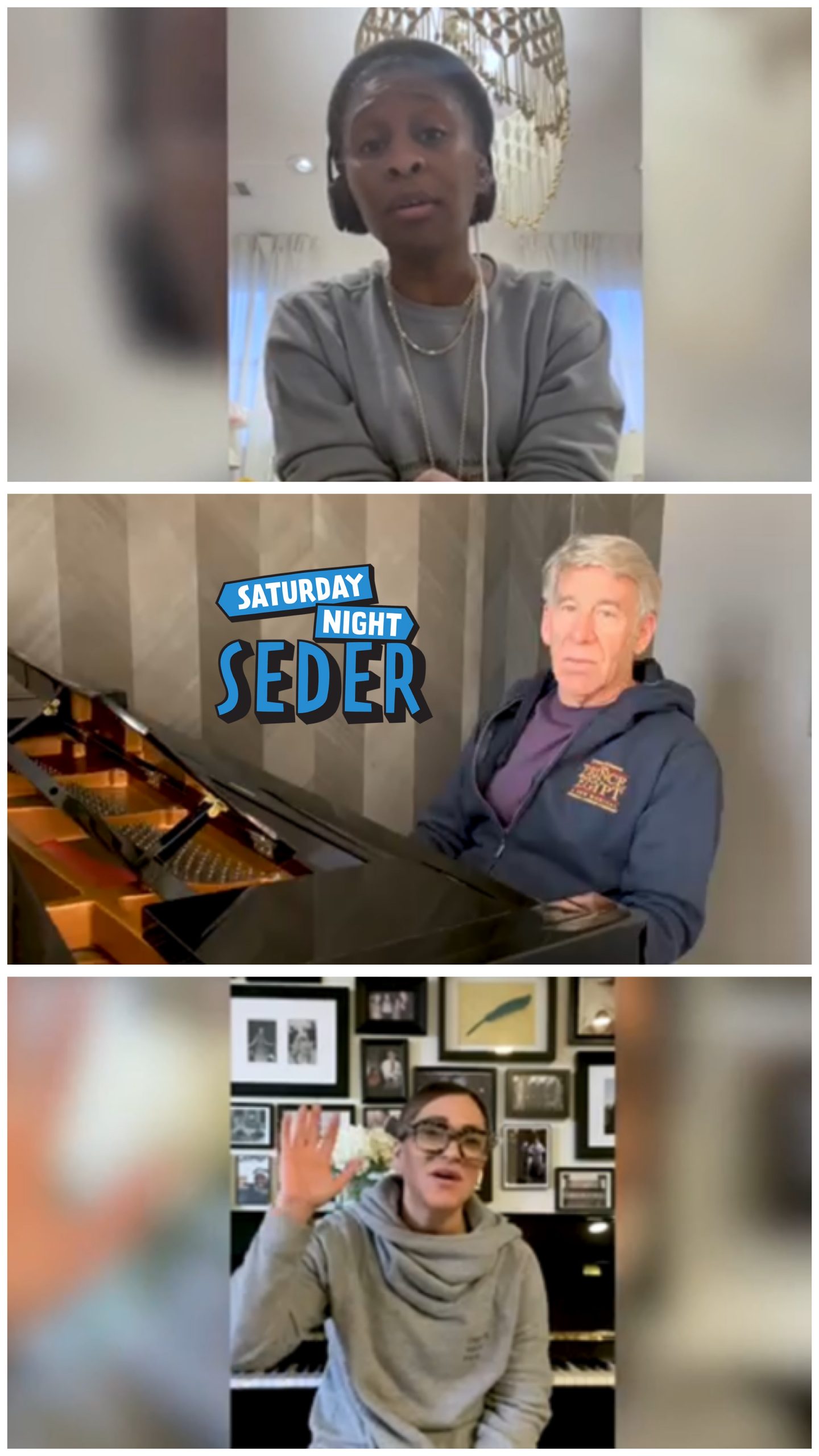 To help convey the message, Pasek, Edelman, and team assembled an enviable roster of performers to entertain and help carry the overall message of the Passover Seder. Their efforts started small, but quickly grew as word and enthusiasm for the project spread, all through a series of Zoom sessions. No single person involved in the creation of the special kept to their unique discipline. Everyone involved wore many hats, performing whatever tasks were required to complete preparation within the allotted 2 week period.

“I think that honestly it was really a team effort to be super collaborative, as corny as that sounds, from two days in,” Edelman recalled. “Benj and I started roping in people that we love, and then they would rope in people they loved. Deeper into the process, we started looking for folks who were talented and could help us whether or not we knew them, and they threw themselves in wholeheartedly.”

The special also featured two new songs written specifically for Saturday Night Seder, “Dayenu” and “Next Year,” written within the period of just over 2 weeks that it took to produce the entire special.

“Dayenu,” the opening song of the special, is based on a phrase that means “enough already.” Within the context of a traditional seder, it’s meant to be a positive way to communicate the participates are sufficiently blessed. Here, the opening number sets the tone for the entire seder. As written by the music and lyrics team of Hannah Friedman, Sam Friedman, Mark Sonnenblick, Pasek and Edelman, it’s an effective blend of comedy and religious overtones that also acknowledges the impact of the quarantine.

The final number, “Next Year,” tends toward a more emotional, wistful closing sentiment.

“Hannah (Friedman) traditionally does comedy writing, but she came to the group with this idea in a Passover Seder which is ‘next year in Jerusalem,’ with Jerusalem being a metaphor for your home,” Pasek said.

“Next Year,” ironically, was the product of a late-night songwriting… booty call. Sort of.

After Hannah Friedman posed the idea, Pasek and team texted musician Shaina Taub around 10:45pm one night and invited her to spend the next three hours writing the song, all through Zoom. The resulting product serves as the true culmination of the project’s intent: that Passover Seder story proves there would be a better tomorrow. The song effectively becomes a call-out to those front-line workers fighting the effects of the COVID-19 pandemic from hospital workers to grocery store clerks.

“We all collectively are in this place of tremendous uncertainty and fear, but we tell this story to remind ourselves that we’ve been in that place before and there’s a reason to hold out hope that, next year, we can hope for something better,” Pasek said.

by Sasha Stone
178
No Result
View All Result