The State of the Race: The Oscars the Way They Used to Be (Except Not)

No Festivals and a later date - almost seems like old times

Yesterday it was announced that the Telluride Film Fest has been canceled. Not CANCELED as in, an internet mob went after them for their choices or their employees or their poster or their screenings. Not yet anyway. No, it was because of the fast spreading COVID-19 virus. Most of us knew it was coming. There was a moment around Memorial Day where it felt like the virus had been mostly wrestled to the ground. On the right, Trump was mocking people who wear masks and turning a refusal to wear masks into some kind of bizarre sign of personal freedom. Trump sycophant governors opened their states too early and no one seemed to be taking it seriously at all. Probably most people didn’t believe it to be such a threat that it has become and that the lockdowns were paranoia. On the left, it was fashionable and necessary to pretend the protests in all 50 states weren’t going to contribute in some way to relaxed attitudes, as a visual symbol that the lockdown was over. But in typically new left fashion, where reality can be curated, no one would admit or talk about it if they expected to keep their jobs. So the right blamed the left for protests and the left blamed the right for listening to Trump and demonizing Dr. Fauci. Our partisanship led to what is happening now — a country so crippled by division and delusion we can’t even come together for the common goal to save lives and stop this virus. It does not bode well for the future, that’s for sure, as we’re inevitably going to be hit with more of these contagions.

At any rate, some are now wondering whether or not the postponed Oscars themselves will be canceled. But in some ways, the virus has yanked Oscar season back to the way it was when I started covering them, in 1999. Back then, Cannes was too early to “matter,” Telluride didn’t really start playing the game seriously until well into the Bush Presidency. Toronto was the only festival that had any influence as to which movies might enter the Oscar race.

Back then, Oscar movies were saved for December, and the later the better. They held onto their prime productions as long as possible because of the Saving Private Ryan vs. Shakespeare in Love shocker — did the de facto frontrunner have no chance against the scrappy little movie that could? Well, that is a story onto itself but the message taken from that year was that “late breakers,” as I call them, had a better chance at winning people over by the time the Oscars arrived. And back then, Oscar Night arrived in late March.

Back then, Oscar predicting didn’t even start until well into the new year. Those of us who went for it in December weren’t even close to right. How can that be? I don’t know, it just is. For instance, while I don’t have late December tracked on the Wayback machine for 2002, the year Chicago won, late November looks like this: 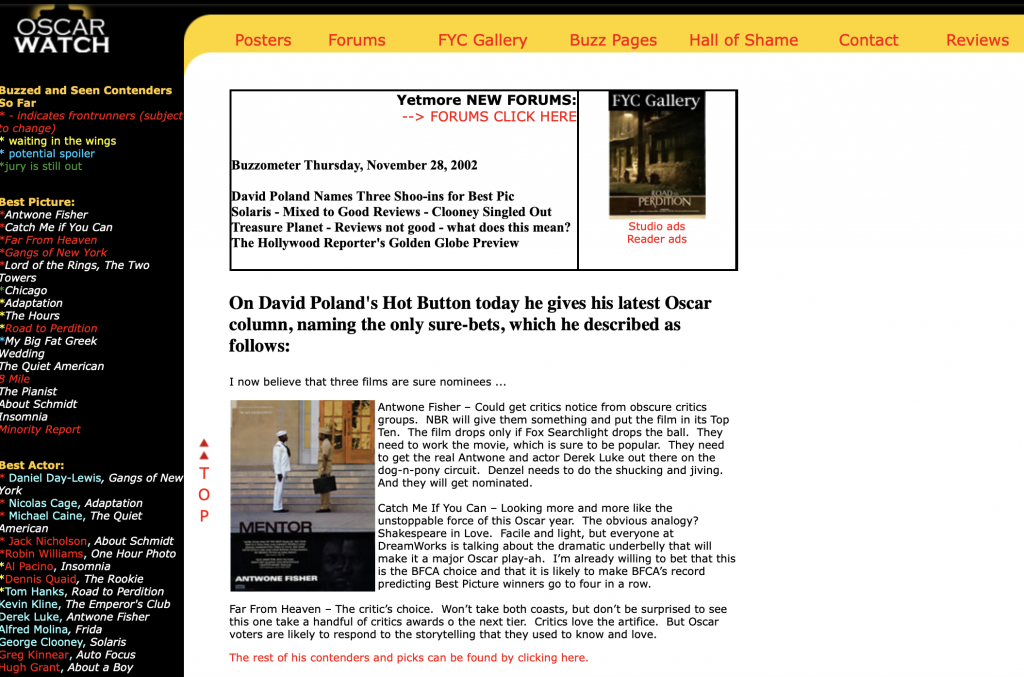 The next snapshot is late January 2003 and by then we had Chicago in the top spot but Roman Polanski, who eventually WON Best Director, is not even in the top five. Of course, now by late January the race could be mostly predicted with a tiny margin of error, give or take a surprise at the end. 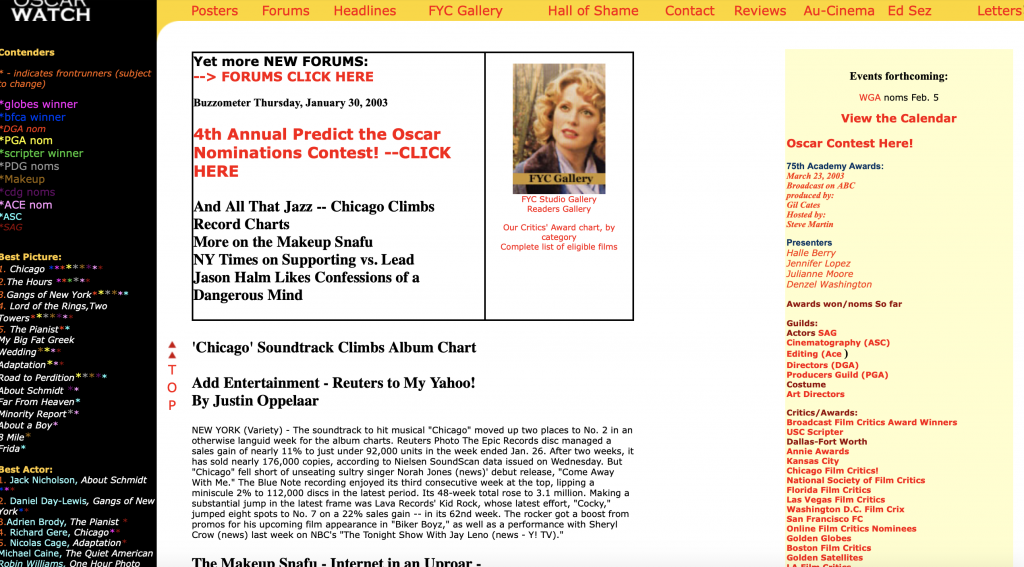 So you see, things didn’t really take shape until well into the year following the year of release. That’s because the Oscars were about movies that opened to the public, not movies curated and selected and raised in a hothouse for Academy voters. Back then, movies were meant to open to the public FIRST, be given a chance to succeed or fail and then the critics and the guilds would reward them, factoring in whether or not the public had approved. Smaller movies would sneak in that weren’t driven by the public, like The Pianist. But in the coming years, after the Academy moved the date back to late February, the whole thing would reverse itself, where popular movies were more rare and smaller specialty titles were the norm.

Given the state of the race NOW, smaller movies are not going to have a chance for one reason: they are not going to have the opportunity to be curated and hand-picked by tastemakers. If you look at the release of Kelly Reichart’s First Cow you will notice it has a two-star rating by viewers on Amazon. Two stars is not a good omen. It’s possible that some of that is driven by angry Tarantino fans after Reichart criticized Once Upon a Time in Hollywood over at Indiewire, but it’s more likely that the general public saw critics raving (96% on Rotten Tomatoes), watched it, and didn’t get what they expected. THAT is your new normal for this year. If films are released on VOD they will be immediately scrutinized by a much wider audience than they have been in YEARS. That is what happened with The Irishman — which, when it dropped on Netflix it became a water cooler discussion and before long ended up as a punchline because of how long it was. It could never have survived that, and it didn’t.

While no doubt film critics will be doing what they did last year, trying to diversify the choices for maximum WOKENESS, it will likely run counter to what the audience rating will be and anyone watching the movie will see the rating and read the reviews. There will be no soft landing for films that are not general audience friendly.

Here is an example — I am an Audible member. I am woefully and sadly addicted to psychological thrillers. So I’m always on the lookout for well-rated books. I do NOT trust critics anymore. I don’t even listen to them because I know most of the time they are protecting themselves, trying to boost books that are socially progressive. But if you go by the user ratings — and if there are enough of them — you mostly can’t go wrong. On Audible, the readers know what makes a good psychological thriller but the critics don’t. That has been my experience, anyway.

I’m wondering if that is how it will be this year where two things are likely to occur. The first, the film will be seen first by critics and bloggers who will write about them — either in a positive or a negative way. Lately, that always means they are not simply watching them for being GOOD MOVIES necessarily, but also for how much they answer the RIGHT NOW. The second way is how the hive mind on Twitter might elevate or chew up and spit out a movie which could influence its chances. Will Oscar voters listen to critics? To Twitter? Or judge for themselves?

What I suspect will happen is that a strong fan base online will push a film or two into contention — and it will be such a strong push towards that movie getting in, or winning, that voters will feel pressured to comply to satisfy the hive mind. I also suspect that bigger movies will have a slightly better chance of getting in than smaller ones. The bigger the stars the more likely people are to watch it given a glut of films shown to a lot of people all at once.

In some sense, the consensus will form how it usually forms – with the combo of critics, the Globes and the Guild awards. From that, each choice will be strictly examined by the press and the social media that feeds it, and each choice will be used as a “statement” of sorts for voters. Like, how last year’s all white acting nominees was the only story heading into the Oscar race.

Finally, the presidential election will have long since happened by January. COVID will hopefully be more under control. We don’t know where we will be collectively as a nation, as a planet, in terms of mood. If we’re still struck with Trump, we’re looking at an angry dystopian view. If it’s Biden, maybe we’re looking at something less angry. Black Lives Matter and the ways they’ve changed the Oscars will also be a major influencer and it’s likely it will be much harder to gain traction if it’s a movie by and about nothing but white characters.

Either way, it’s going to be a wild ride, Oscarwatchers. Hold onto yourselves.