A Century (and then some) of Olivia de Havilland

by David Phillips
in News
15

Olivia de Havilland may just be the last of old Hollywood. Perhaps I’m forgetting someone, but if there is another grand dame from the golden age of Hollywood still roaming around, I can’t think of her.

As a child, the Tokyo-born British citizen moved to California where she caught the acting bug by performing in numerous theatrical productions before making her film debut as Hermia in 1935’s A Midsummer Night’s Dream, De Havilland would have her breakthrough that same year in the hit swashbuckler Captain Blood (directed by Michael Curtiz), starring across from Errol Flynn. The two had remarkable chemistry from their first moment onscreen together. Both were impossibly good looking and carried a hint of aristocracy and refinement in their mannerisms and line readings.

The two would re-team with Curtiz the next year in The Charge of The Light Brigade, based on Tennyson’s narrative poem of the same name. Playing the center of a love triangle between Flynn and Patric Knowles, de Havilland shone once again and the film was a major success at the box office. 1936 would prove to be a big year for the actress, as the historical romance Anthony Adverse (directed by Mervyn LeRoy) was also a box office success and received six Oscar nominations.

The actress would showcase her light comedic gifts the next year in two films directed by Archie Mayo, Call It A Day and It’s Love I’m After (the latter of which co-starred Bette Davis). However, it would be her next film that sent her into superstardom: 1938’s The Adventures of Robin Hood, in which de Havilland would play the definitive Maid Marian across from Errol Flynn’s immortal version of the title character.

But de Havilland’s Maid Marian was no mere damsel in distress—it’s a sneakily feminist role, strengthened all the more by de Havilland’s tough-minded nature (she was known for negotiating her own contracts and clashing with studio heads who tried to force her into ingenue roles). With Michael Curtiz directing the duo once again, their Robin Hood would become the standard telling of the legend in cinematic history. Many filmmakers have attempted to take on Robin Hood since, but none have matched the delightful energy, sharp wit, and rollicking adventure of their version.

Despite her breakthrough in Robin Hood, de Havilland initially struggled to capitalize on the film’s massive success. Two high-profile supporting roles followed in 1939 with Curtiz’s The Private Lives of Elizabeth and Essex and Dodge City (her first Western). To de Havilland’s mind, though, both roles were underwritten and left her feeling depressed about the state of her career. But one film (her final of that year) would help recover her zest for her profession: Victor Fleming’s all-time great success (the film has still sold more tickets than any other in the history of motion pictures) Gone With The Wind.

Showing impressive determination and pluck, de Havilland engineered her way out of her Warner Brothers contract so that she could act in Gone With the Wind by going through studio head Jack Warner’s wife. Warner eventually agreed to loan the actress out to David Selznick and MGM for the part of Melanie Hamilton. Interestingly, de Havilland had no interest in playing the lead role. After reading Margaret Mitchell’s novel, she found herself responding to Hamilton’s quiet strength and dignity. For her performance, de Havilland was nominated for her very first Oscar in the category of supporting actress.

But de Havilland’s strong-willed desire for quality roles led to her butting heads with Warner after she returned to the studio. She refused several roles that she considered to be low quality and found herself on suspension from Warner Brothers for a time. The three films she made in 1940, Sante Fe Trail with Curtiz and Flynn, Raffles with David Niven, and the romance, My Love Came Back were all modestly received by critics (although Sante Fe was a sizable hit with audiences).

The following year would bring de Havilland and Flynn together for the eighth (and final) time in the historically ridiculous re-telling of General Custer’s life, They Died With Their Boots On. Re-casting Custer as a Native-American-friendly, flamboyant hero (resembling nothing of the actual man), Raoul Walsh’s film was a huge hit at the turnstiles and de Havilland’s career was quickly back on track. Her second film with Walsh from that year, Strawberry Blonde, a romantic comedy with James Cagney was also a hit. Her final release from 1941 proved to be a critical standout, the romantic drama Hold Back The Dawn. Co-starring Charles Boyer and Paulette Godard, Hold Back earned her a second Oscar nomination, this time as a leading actress. While the film was both a critical and financial success in its day, it is also known as the movie that drove Billy Wilder into directing due to what he considered the butchering of his script by the film’s director, Mitchell Leisen.

In the final two years of her contract with Warner Brothers, de Havilland’s films were often well-attended by audiences but her roles lacked the substance she craved. In 1943, when her contract ended with Warner Brothers, she chose not to renegotiate with the studio. In a fit of pique, Jack Warner extended her contract six additional months, claiming he had the right to do so due to de Havilland’s numerous suspensions. Bette Davis had sued for a release from her own contract under similar circumstances in the ’30s and lost.

Undaunted, de Havilland mounted her own case and in November of 1943, the California Superior Court ruled in her favor. Warner Brothers immediately appealed and the case dragged on for another year before the California Court of Appeals sided with the lower court’s ruling. The resulting decision is now known as the de Havilland law, which forbids an employer from “enforcing a contract against an employee for longer than seven years from the date of first performance.”

Warner Brothers proceeded to blackball de Havilland and she did not work in front of a camera again for more than two years. In the interim, de Havilland (who became a U.S. citizen in 1941) turned her energies toward supporting the war effort by raising money and performing in USO tours.

When de Havilland finally returned to the big screen, after signing a two-picture deal with Paramount, she delivered one of her greatest performances in To Each His Own. We follow de Havilland’s character from being a destitute young woman to a successful businesswoman who later reunites with the son she gave up for adoption 30 years later. The film was a huge hit, and to make her comeback doubly sweet, de Havilland was nominated for her third Oscar (and her second in a leading role)—and this time she won. 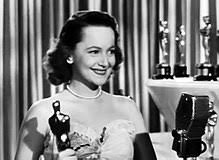 Oscar came with another nomination just two years later for her performance in Anatole Litvak’s The Snake Pit (1948). While the film might look antiquated today, it was one of the first movies to take a serious look at mental illness (and the treatment of people by the institutions they were confined in). As a woman institutionalized by her husband after suffering a nervous breakdown, de Havilland delivers a tour de force performance that still stands out in a film that was a true breakthrough at the time.

de Havilland danced with Oscar one final time the following year with her lead role in William Wyler’s adaptation of the Henry James novella Washington Square, The Heiress. Top-billed over Montgomery Clift, de Havilland delivered what many critics still consider her greatest performance. de Havilland begins the film as a plain spinster far too willing to be taken advantage of by a handsome man looking to take advantage of her inheritance. But in the film’s final moments, her transformation from a weak-willed damsel to a steel-spined woman of dignity is made complete when she turns away from Clift. Once again, de Havilland’s name was called when the envelope for best actress was opened at the Academy Awards ceremony in 1950.

After The Heiress, de Havilland’s pace of work slowed in the next decade. Perhaps her most notable film of the ’50s was Stanley Kramer’s Not As A Stranger with Robert Mitchum in 1955, where she once again played a woman taken advantage of by a younger man. The ’60s were slower still, as de Havilland appeared onscreen only a handful of times. 1964’s nasty little shocker Lady In A Cage was notable. Even more notable was that same year’s Hush Hush…Sweet Charlotte which teamed de Havilland with Bette Davis in Robert Aldrich’s wildly over-the-top (but certainly unforgettable) psychological thriller. 20th Century Fox had hoped that a re-teaming of Davis and Joan Crawford would recreate the success Warner Brothers enjoyed with Whatever Happened To Baby Jane two years earlier. However, Fox was forced to cast de Havilland in the Crawford role after Crawford took ill and could not sign on. While the film was thought of by many as overly sensational, it was a sizable hit in its own right and de Havilland was praised by many a critic for giving the film what little subtlety it contains.

Post-Charlotte, de Havilland carried on in a state just short of semi-retirement, often appearing in roles that weren’t up to her standard in films better left unmentioned. She did receive a Golden Globe and an Emmy nomination for her supporting role in Anastasia as the Dowager Empress Maria in a two-part film for NBC.

Outside of her career on film, de Havilland was a noted activist. She fought for labor rights and against communism. She campaigned for FDR in 1945 and, in 1958, when called in front of the House Un-American Activities Committee (which aimed to ferret out those in the arts with anything approximating communist ties), she named no names.

Also of note, she and her sister Joan Fontaine are the only siblings to ever win an Oscar in a leading category.

'Twas the Podcast Before Noms and We're Gathered 'Round the Cooler