As with most of us, production designer Melanie Jones was a fan of the original Bill & Ted movies – Bill & Ted’s Excellent Adventure (1989) and Bill & Ted’s Bogus Journey (1991). They were fun, breezy movies best remembered for helping launch Keanu Reeves as a major box office star. But when Jones received the call to design the new film in the trilogy – yes, now we have to call it a trilogy – she found herself incredibly excited to join that universe.

“I was working on a TV series at the time – [ABC’s] Bless This Mess – and my art director was there with me,” Jones recalled. “My agent called and said, ‘Hey, they’re requesting an interview with you.’ I told my art director, and we both freaked out.”

Bill & Ted Face the Music reunites Reeves and Alex Winter with the roles they originated in 1989. In the new film, Bill and Ted deal with the mundanity of middle-aged life and troubled marriages. Thanks to some time-space-warp-fracture thing (don’t ask — it’s not the point), they must write a song that will save the universe forever. All in 78 minutes. With the help of their daughters (Samara Weaving, Brigette Lundy-Paine) and more historic figures, of course.

Given a history with time travel, a Bill & Ted film demands design perspectives from nearly a dozen different periods. Face the Music was no exception. Jones jumped at the experience to challenge herself and push her designs in ways she hadn’t before. Not only did she have to design for multiple eras, both past and present, but she also had to built two massive sets for critical sequences within the film.

“I had to do a couple really big sets on [Face the Music]: hell and a freeway. This is like walking upstairs,” Jones said. “I definitely stepped up a couple of steps above what I’ve done before.”

First up, Bill and Ted revisit their ex-bandmate the Grim Reaper / Death (William Sadler) in hell. Many of the backgrounds were provided using CGI, but Jones needed to design a functioning set resembling a comic vision of hell. To render the hell geology, Jones and team created broken, cracked earth with an abundance of sand and dirt. Peppered amongst the set were what Jones calls “hell rocks,” which she considered the most fun to create in the film. She had to determine hell’s color and texture and then apply that to a series of rocks to form hallways or caverns.

Then there was the Grim Reaper’s house, which subtly reflects the fact that he’s not doing so well after all these years. 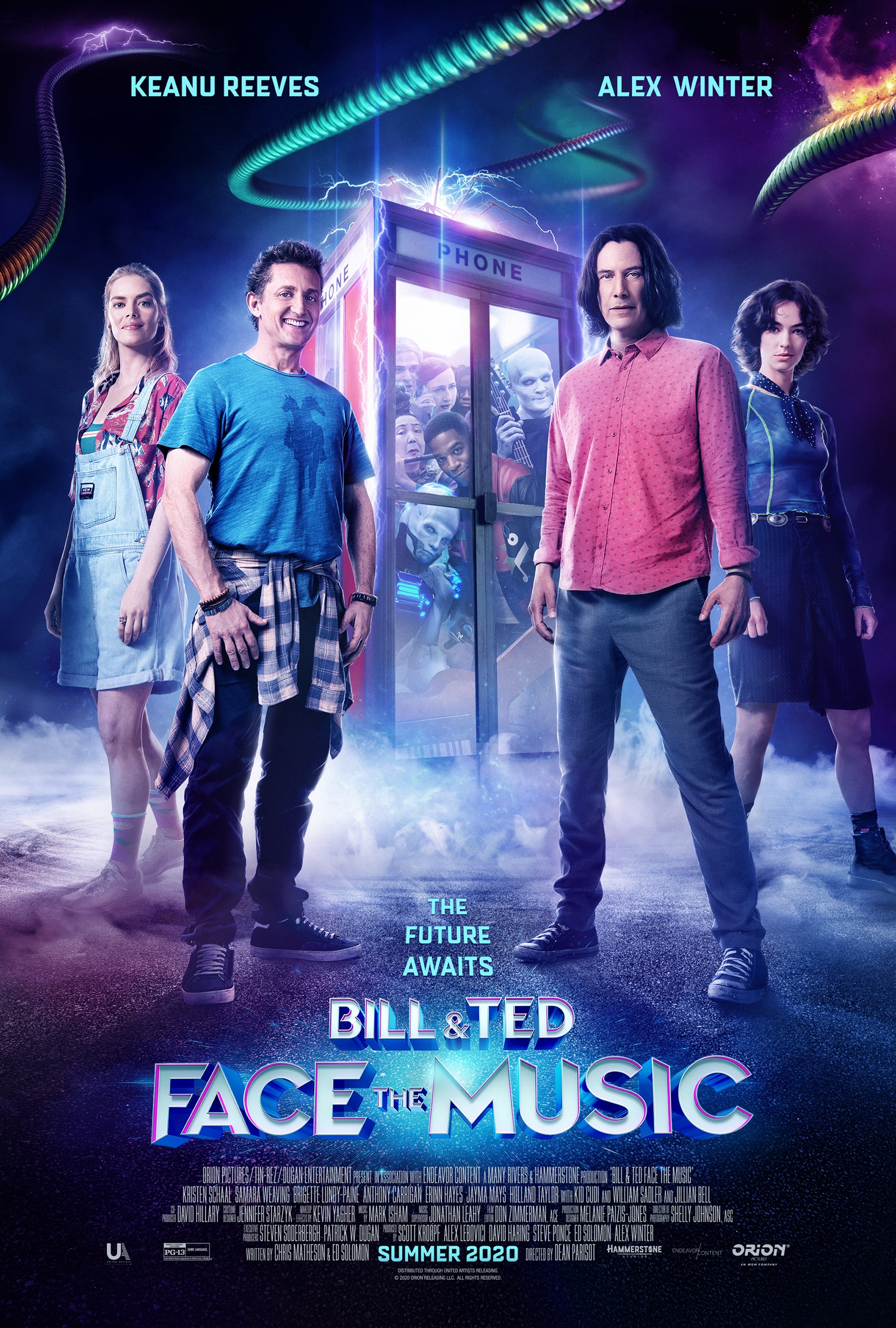 “I brought the idea of mid century modern to the job with me when I interviewed because I thought it was funny. I think it’s his midlife crisis house. He’s moved beyond the Gothic castle he was in earlier, which was definitely cool,” Jones explained. “But now, because he’s not part of the band, he’s had this real kind of identity crisis. He’s trying to be relevant in some way, the things that happen in a in a midlife crisis. He builds this mid-century LA-style house. It could be the equivalent of a place in West Hollywood.”

The irony of this mid-century hell estate is that it’s built out of wood. Naturally, the wood boasts a burnt texture. Because, you know, it’s hell. The house also offers a lava-filled koi pond.

These choices are all a component of the production designer’s job. They introduce subtext not referenced directly in the script that provide inferences about our characters, in this case a tortured, lonely, middle-aged Grim Reaper.

In addition to that hell-bound experience, Jones also designed and built an entire freeway as required for a late-film pivotal scene. Given the extensive shooting days required for the sequence, shutting down an actual freeway wasn’t an option. While filming around New Orleans, Jones and team discovered a former Lowe’s location near the Lower Ninth Ward, an area decimated by Hurricane Katrina 15 years ago.

The parking lot provided a large enough space in which Jones could convincingly recreate a SoCal freeway near San Dimas. The finished product includes an overpass and its on-ramps, the 210 freeway, lanes of traffic, fencing, a side road, and more. While the overpass was constructed from foam, it was still a huge structure to construct and orient to convincingly render a complete SoCal freeway.

“When I design I don’t limit myself. I just go, ‘This is what it should look like. This is what the whole thing would be,” Jones explained. “Dean [Parisot, director] had very clear vision of everything. Our vision was super close, and I think that’s why I got the job.”

And she did a most excellent job.

Bill & Ted Face the Music drops today on VOD and in select theaters.

The State of the Race – Now the PGA Have Spoken, What Now?