NEW YORK, NY (August 28, 2020) – HamptonsFilm announced today that the 28th edition of the Hamptons International Film Festival will open with the World Premiere of Glenn Kaino and Afshin Shahidi’s WITH DRAWN ARMS, which follows the legacy of Olympic athlete Tommie Smith’s fist-raising gesture during the 1968 Olympic games. The film features interviews with various subjects including soccer gold medalist and activist Megan Rapinoe, the late U.S. Representative John Lewis, and actor Jesse Williams, who also serves as an executive producer along with musician John Legend. The film will be awarded the Film of Conflict & Resolution Award, a signature HIFF award given to a film that deals with the complex issues and societal effects of war and violence, and the attendant human dramas, in creative ways. The award is accompanied by a $5,000 cash prize from the Brizzolara Family Foundation. HIFF will take place October 8 – 14 with virtual screenings and drive-ins. 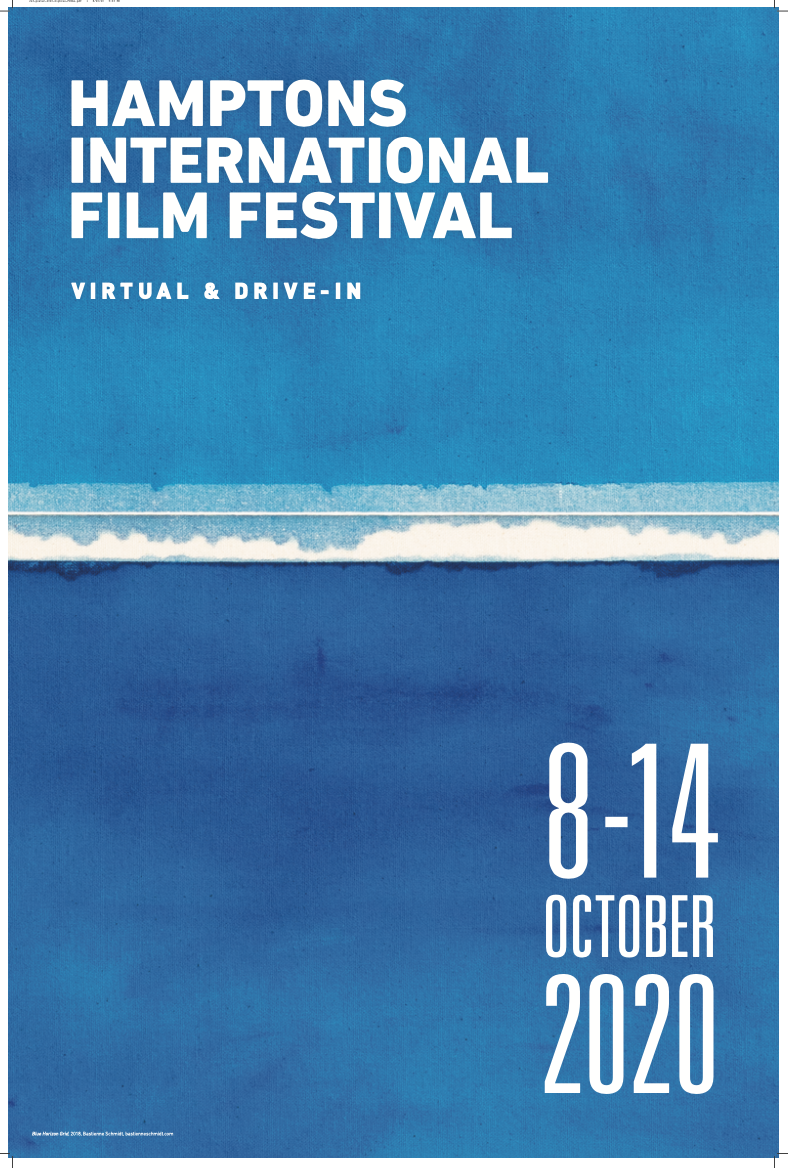 The festival will also feature the World Premiere of Rick Korn’s HARRY CHAPIN: WHEN IN DOUBT, DO SOMETHING, which illuminates the award-winning songwriter Harry Chapin, whose work includes such beloved hits as ‘Cats in the Cradle’ and ‘Taxi,’ and will screen in the Views From Long Island section; as well as Florian Zeller’s THE FATHER in the Spotlight Section, which follows a father and daughter’s relationship in the face of the father’s ailing memory, and stars Academy Award® winner Sir Anthony Hopkins and Academy Award® winner Olivia Colman; the East Coast Premieres of Edson Oda’s NINE DAYS, a gripping tale of a man living in an unknown, metaphysical realm who is tasked with choosing one worthy soul to be born, starring Winston Duke and Zazie Beetz, and Elizabeth Lo’s documentary STRAY, shot through the eyes of three stray dogs wandering the streets of Istanbul, their gaze being a window into the overlooked corners of society, which will screen in the Compassion, Justice and Animal Rights Section.

“In the face of these unprecedented times, we are thrilled to continue to present unique and fascinating films for our audiences—from thrilling narratives like THE FATHER and NINE DAYS to powerful documentaries like STRAY and HARRY CHAPIN: WHEN IN DOUBT, DO SOMETHING. We are particularly proud to be opening this year’s 28th edition with a film that explores a seminal moment from the civil rights movement that continues to resonate with today’s climate of conflict and change in WITH DRAWN ARMS,” said HamptonsFilm Artistic Director David Nugent.

“While this year’s festival may look different, we look forward to supporting filmmakers by following our mission to showcase new voices and the best of cinema from around the world, plus we are delighted to continue giving over $28,000 in cash awards, as well as another $130,000 in goods and services to our competition winners,” said Anne Chaisson, Executive Director of HamptonsFilm. “Now more than ever, audiences need a place to escape, whether through a virtual or a drive-in screening, and can immerse themselves in entertaining, gripping and enlightening movies this fall.”

HIFF is proud to announce that world-renowned artist Bastienne Schmidt’s Blue Horizon Grid, 2018 has been selected as this year’s poster art. A multi-media artist working with photography, painting, and large-scale drawings, Schmidt was born in Germany and raised in Greece and Italy, and has lived on New York’s East End for the past 20 years. Schmidt’s diverse oeuvre is included in the collections of the Museum of Modern Art in New York, the International Center of Photography, the Brooklyn Museum, the Corcoran Gallery of Art in Washington D.C., the Victoria and Albert Museum in London, and the Bibliothèque Nationale in Paris, among others. She has been shown nationally and internationally in over 100 exhibitions.

Additional information on HamptonsFilm’s year-round programming, including the Now Showing series, SummerDocs Program, and recently established Flashback Friday and Summer Drive-In Series can be found on the website. The 28th annual Hamptons International Film Festival will take place October 8 – 14, 2020. HIFF thanks the supporters for this year’s festival, including corporate sponsors Netflix, The Seltzer Group at JP Morgan, Silvercup Studios and the official media sponsors WNBC and The East Hampton Star, and is grateful for the long-term support from NYSCA and Suffolk County. For more information, please visit www.hamptonsfilmfest.org.

WITH DRAWN ARMS – OPENING NIGHT
dir. Glenn Kaino, Afshin Shahidi (USA), 2020
World Premiere
While the national anthem played during the 1968 Olympics, gold medal-winning champion Tommie Smith proudly raised his fist in the air; this act of silent protest has become one of the most recognizable images in the history of sports. Almost fifty years later, Smith has partnered with artist Glenn Kaino to help explore and expand his legacy. In the process, the duo travel around the country, meeting with key figures who were inspired by Smith’s sacrifice and working on new art projects designed to connect Smith’s intention to a new generation. The untold story of his sacrifice becomes a cautionary tale of how we must work together to keep each other’s stories alive, and a reminder of how much, but also how little, has changed for athletes who are using their voices to make a difference.

THE FATHER
dir. Florian Zeller (UK/France), 2020
Roguish, feisty, and staunchly in denial about his ailing memory, 80-year-old Anthony (Academy Award® winner Anthony Hopkins) defiantly lives alone in his London flat and rejects each and every caretaker his dutiful daughter, Anne (Academy Award® winner Olivia Colman) attempts to hire. But she cannot continue to care for him alone, and Anthony’s grasp on reality and his sense of self soon begin to unravel, casting him as the unreliable narrator of his own story. Seamlessly adapted from his award-winning play of the same name, and anchored by two spectacular performances, Florian Zeller’s astonishing directorial debut is a deeply moving, uncompromisingly empathetic contemplation of how illness can strip away everything from those afflicted and those who are closest to them. A Sony Pictures Classics Release.

HARRY CHAPIN: WHEN IN DOUBT, DO SOMETHING
dir. Rick Korn (USA), 2020
World Premiere
Harry Chapin, the award-winning songwriter behind beloved hits such as ‘Cats in the Cradle’ and ‘Taxi,’ defined his life through his storytelling and his humanitarian work. In this deeply moving portrait, documentarian Rick Korn chronicles the Long Island icon’s extraordinary journey—from his rise to fame to his tragic, untimely death. Through intimate archival footage and interviews with his famous friends and fans—including Billy Joel, Pete Seeger, Pat Benatar, Bruce Springsteen, and many more—HARRY CHAPIN: WHEN IN DOUBT DO SOMETHING celebrates the legacy of an artist and activist who tirelessly dedicated himself to others, and offers an inspiring call to follow in his footsteps. A Greenwich Entertainment Release.

NINE DAYS
dir. Edson Oda (USA), 2020 East Coast Premiere
Living in a lonely outpost in an unknown, metaphysical realm, Will (Winston Duke) is tasked with observing those going about their days on Earth. When an unexpected tragic event leaves a vacancy for a new life, Will must carefully whittle five prospective candidates down to one worthy soul: the winner has the opportunity to be born, while the others lose that chance forevermore. But Will soon faces his own existential challenge in the form of Emma (Zazie Beetz), a free-spirited candidate unlike the others, and he is forced to reckon with his own tumultuous past. An extraordinary feature debut, Edson Oda’s brilliant and haunting piece grapples with the enormous complexity of the human condition. A Sony Pictures Classics Release.

STRAY
dir. Elizabeth Lo (USA), 2020
East Coast Premiere
Through the eyes of three stray dogs (Zeytin, Nazar, and Kartal) wandering the streets of Istanbul, STRAY explores what it means to live as a being without status or security. As they search for food and shelter, the dogs embark on inconspicuous journeys through Turkish society that allow us an unvarnished portrait of human life. Disparate lives intersect when they each form intimate bonds with a group of young Syrians who share the streets with them. Whether they lead us into bustling streets or decrepit ruins, the gaze of these strays act as windows into the overlooked corners of society: women in loveless marriages, protesters without arms, refugees without sanctuary. The film is a critical observation of human civilization through the unfamiliar gaze of dogs and a sensory voyage into new ways of seeing. A Magnolia Pictures Release.

HamptonsFilm, home of the Hamptons International Film Festival (HIFF), based in the Hamptons on the Eastern End of Long Island, was founded in 1992 to celebrate the art of film and to introduce a unique and varied spectrum of international films and filmmakers to our audiences with an annual film festival each October. A non-profit organization with year-round screenings of global narrative and documentary films, a Screenwriters Lab, and extensive educational initiatives, HamptonsFilm offers programs that enlighten, educate, and provide invaluable exposure for filmmakers, while also providing the East End of Long Island with an educational and cultural experience that enriches the lives of its citizens and contributes to the local economy. HIFF, celebrating 28 years as the tentpole event of HamptonsFilm, is an annual premier film event in New York State, and is an intimate showcase of some of the year’s best offerings in contemporary cinema from around the world. Awarding prizes to filmmakers in cash and goods and services of over $155,000 each year, with over $4.5 million awarded in competition funds and services over the past 27 years, our program continues to play an important role during awards season. 2019 marked the 10th time in a row that a film in the Festival has become the eventual Best Picture winner at the Oscars, making HIFF the only Festival in the world with such a distinction. For more information, please visit www.hamptonsfilmfest.org.