The contender for Directing for a Drama Series talks about one of the most memorable television episodes of the year.

Who knew humiliating men at a business retreat would become such a quotable, iconic moment of this television season?

In Succession‘s third episode of its second season, the men of the Roy family travel to Hungary for a hunting retreat, but Brian Cox’s patriarch finds out that someone might have spoken to a biographer. That indiscretion might cost him the acquisition of a rival company. All of the locations are dripping with decadence, but a dinner descends into a humiliating hell when Logan tests the loyalty of his children and other family members by making them crawl on the floor and beg for his forgiveness. Director Andrij Parekh ratchets up the tension like we’ve never seen on Succession, and the result is one of the most unforgettable moments of the show.

Parekh, who also served as a cinematographer and a director on HBO’s Watchmen, wanted to create a safe space for his actors for this ghoulish game. We’ve never seen anything so physical on Succession before, so he talked to the cast about their limitations and what they wanted to bring to the scene.

The Boar on the Floor moment is so memorable because Logan’s monstrous behavior has never been taken to that level before. He yells and insults his children, but there is something more dangerous and scary about him when there is literally nowhere else to run. Parekh had no idea how much the episode was going to be quoted or talked about when they shot the episode, but I assured him that people are still talking about it.

Awards Daily: Do you think they played Boar on the Floor at the Republican National Convention?

Andrij Parekh: I certainly hope so. I hope there are two specific people eating sausages off the floor.

AD: “Hunting” is the third episode, and you also directed the episode previous to it, “Vaulter.” After reading the script, what were you most excited to bring to it?

AP: They came, I think, to really help Jesse [Armstrong] and Mark [Mylod] get the show on its feet. Having someone they knew and trust was something that they needed. Mark directed the first episode of the season, and with me taking two and three, everyone was occupied for a month or a month and a half while they got the rest of the season up and running. When I got the script for episode three, it had a delightfully sadistic element to it, and I wanted to see how perverse Logan could become without making it outrageous and grounding it in reality. That was a challenge. Walking that fine line of not allowing it to be absurd but not letting it be comical. Making it the true tragicomedy that Tony Roche and Jesse wrote.

AD: Brian Cox manages to make his performance so riveting and it never feels repetitive when, in the hands of another actor, it would’ve become tiresome at this point.

AP: Brian has a lion that can come out of him at any moment. He can unleash it. The thing was to build that character arc in that scene. It’s about taking the scene beat by beat and not letting that fury come out too soon. I actually think the strongest moment of the sequence is when Brian comes back in the room with a dessert tray and lays into Roman. There’s a moment that’s incredibly touching to me where he’s so exhausted from having gone through this and his voice almost cracks when he says, ‘We’re going after Pierce and I will win.’ He’s King Lear in a way. He’s magnificent.

AD: That fury never lets up no matter how many times I see it.

AP: What I brought to it was the element of humiliation. We made sure everyone was okay with what we are doing, because humiliation is humiliation regardless if you’re acting or not. I talked to the actors about how far they were all right with going and providing a set that was very protective of them. To let them know that it was okay to go there and not be egregious. We did very little coverage. Them oinking on the floor was a last minute addition that we threw in to push it a little further. Brian calling people to stand like Gerri and Greg in the dinner, I wanted the feeling of being called on in the fourth or fifth grade being called out by your teacher.

AD: That’s exactly what I thought about. When you get called in and your face flushes.

AP: Yes, exactly. That public humiliation where you feel trapped, and they are trapped in that room. Brian’s attaché locks the doors and the servers walk out, and it feels totally hermetic. Kind of like between Stalin and a mafia lord testing his closest people.

AD: I love the tension in the dinner scene that is brought before it all goes down. That silence is suffocating.

AD: Is it hard to build that?

AP: You have to make the space for the actors and let them build the scene. They really embody the scene. We do such long takes on Succession. Adam McKay, the director of the pilot, and I set out to create filmed theater with such a powerful cast. We are shooting in ways that the actors never know where the camera is, so it forces all the actors to always be on. It brings an element of reality to the performance. They aren’t performing for the camera and they are performing for each other. Part of it is the style that we set out when I was the cinematographer. As a cinematographer, I try to give performance space. For me, that’s the most important thing. We didn’t want the machinery of filmmaking interfering with the performance

AD: There are a lot of funny moments in Succession, and I was wondering how you wanted to use that in “Hunting” as a tension reducer? Since the drama is so big in this episode, the comedic moments really shine through too.

AP: It’s in the writing, and I think Tony and Jesse have nailed the tone. If there wasn’t humor, the show would be way too heavy. 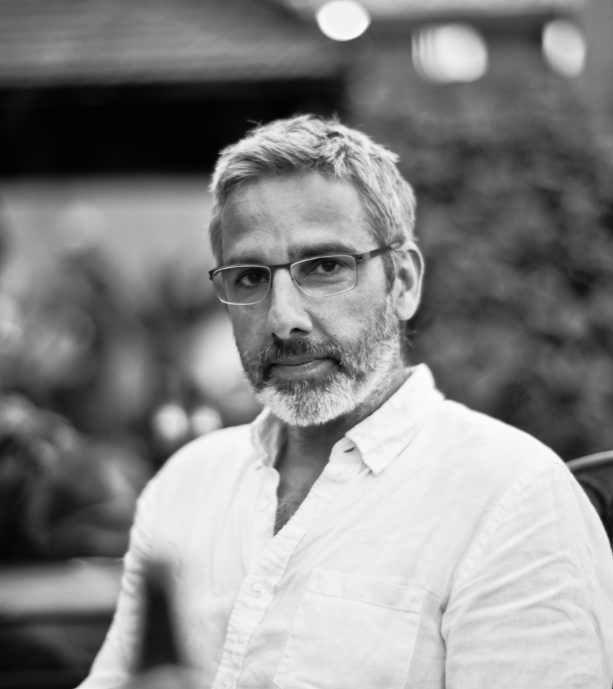 AP: You need the balance to not drag an audience through the mud all the time. There’s a lot of things happening thematically with all the offspring fighting for his throne. That element of humor is very important to allow the characters to feel real. I don’t think we can say that you can relate to the characters but the humor allows us to enjoy them in this folly.

AD: Since you work as a cinematographer and a director, I was wondering about the visuals of your nominated episode. One shot that I loved was they are standing around the outside of the house and there are these big fires outside. It’s kind of overly masculine and tribal in front of this gorgeously lit up villa.

AP: There’s this incredible garden at the location where we shot. We wanted to balance the medieval, primal aspect of hunting with this refined garden that has been pruned to perfection. That, to me, is what Succession is about. These characters inhabit this “high-class” world where all the elements of wealth are always on display. To have it paired with all the boars that have been shot. In Hungary on these hunting retreats they have this paganistic thanks to the boars at the end of a hunt. We shot with four cameras for that sequence and we only have 20 minutes to shoot it. It was kind of ridiculous (laughs).

AD: You get to direct a scene between Gerri and Roman towards the end. By this point, we haven’t seen where their relationship is going, but I was wondering if you knew? How was this scene a building block for what happens later in the season?

AP: I didn’t know where it was going in future episodes. That was one of the trickiest scenes and we had to figure out how we blocked it and staged it. We didn’t want to oversexualize the tension but also we had to have it there. How do you do it in a tasteful way that feels real and is also funny? Working with those actors, you oftentimes find those things. I’ll ask them to try something in a certain position that I thought it would work, and if it doesn’t, we just adjust it. There was about five or six iterations before we shot what ended up being the scene for the episode.

AP: No way. There’s not a way for you to predict that. We never expected it. When you shoot it, you never know how something is going to be received.

Succession is streaming on all of HBO’s platforms, including HBO Max.