"I find that good comedy editing makes emotional scenes pay off even better."

by Joey Moser
in Editing, Interviews
0

The Broken Hearts Gallery is unlike any romantic comedy that I’ve ever seen. Since that genre has all but died over the past ten years, it’s refreshing to see how this film remains light and effervescent while quietly showcasing a cast of diverse actors and passing the Bechdel Test. There is a romance at the center of this film, but this isn’t something Kate Hudson would’ve been offered in the heyday of the rom-com.

Written and directed by Natalie Krinsky, Broken Hearts follows Lucy, a young woman trying to make it in the art world who is blindsided by heartbreak. She sparks a friendship with an aspiring hotel owner, Nick (a mulletless and handsome Dacre Montgomery), who offers her space to showcase items from relationships of yore in exchange for help to finish his hotel. As Lucy, Geraldine Viswanathan is a winning heroine.

Editor Shawn Paper reveled in the feminist heart of the film. He worked closely with Krinsky to evolve the script from the page to the screen, and the result is a perfect combination of wit, nostalgia and truth. No relationship is without bumps and bruises, but this film has a lot more on its mind than making sure the guy and girl get together. “It’s a hopeful kind of movie that we need more of,” Paper told me of what he hopes people take away from it.

Awards Daily: The essence of it feels like it follows the structure of the romantic comedies that we all love, but it has a modern feel or modern heart. It reminded me of something that I may have watched in like the late ‘90s or early 2000s.

Shawn Paper: I think you’re right that it has that classical feel. I’m not sure if it’s exactly ‘90s. Maybe it goes back to something like When Harry Met Sally as Natalie Krinsky suggested to me. She told me to watch His Girl Friday and Rosalind Russell and that witty repartee with Cary Grant that brings us from place to place. Natalie wanted to root this in a real world but have that world be special and magical. It’s not about a bartender but it’s a New York story. It’s different. I wouldn’t say that it’s simply a rom-com because the central character’s relationships are mainly with other independent women. 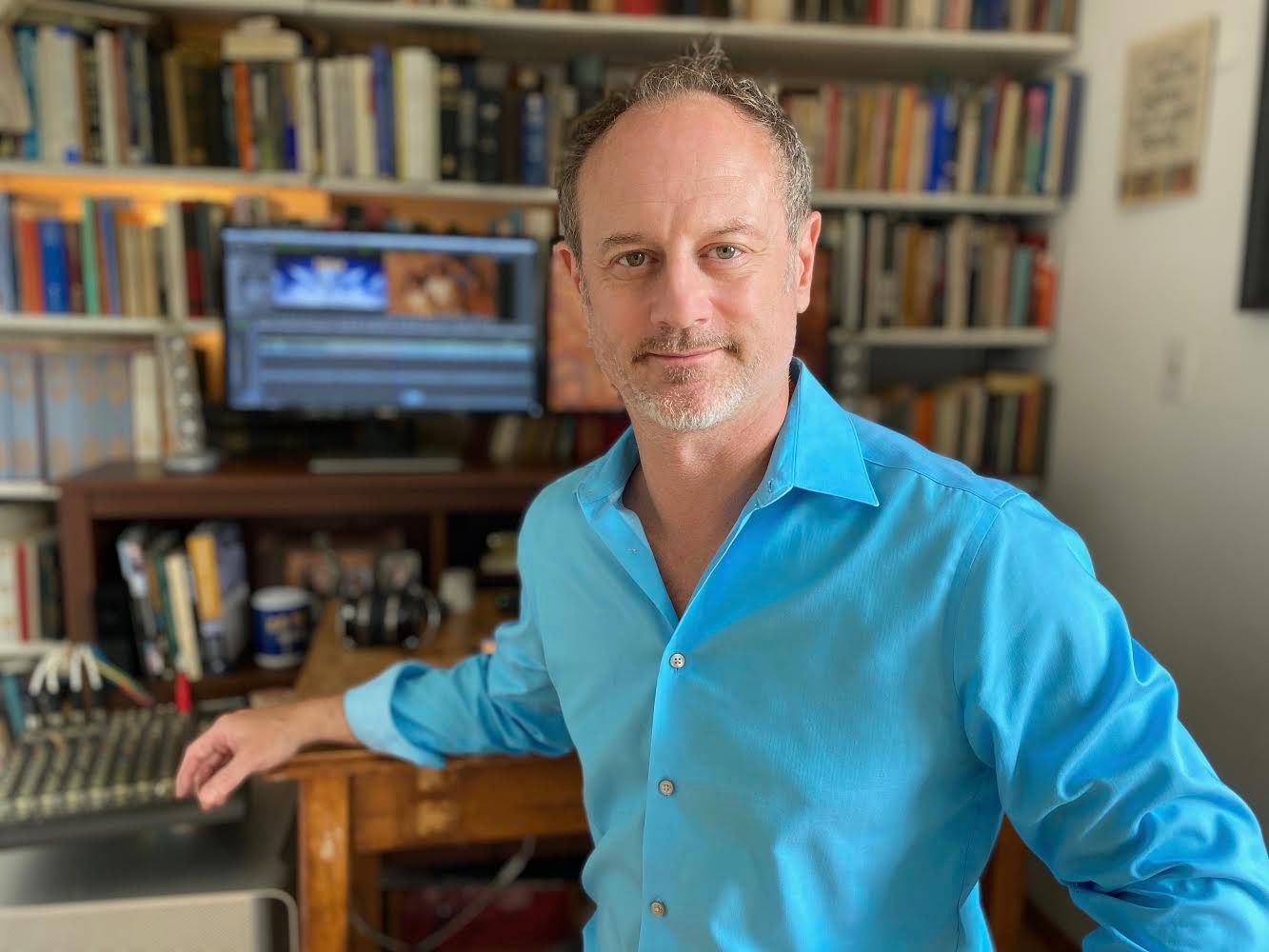 SP: It makes it a movie about now. When I read the script, I was excited to see her relationships with Molly Gordan and Phillipa Soo and how it passes the Bechdel Test. Plus, I got to do some research into the New York City art world, and I love to do research on the projects I’m working on.

AD: I do love that when the three young women are together they aren’t bemoaning the relationship with the leading man. It’s about Geraldine’s character’s goals and happiness.

SP: I feel the same way. That was there from the script stage, and this is the first good Gen Z story that I’ve been a part of. I wanted to help bring the voice and the subplots of the undercurrents of our world today through music and through racial and sexual awareness of unconscious bias. I thought that was important to bring those up without preaching to the choir, without being pedantic. Anyone in the supporting cast could’ve been any race or identified with a different sexual orientation from Ego Nwodim to Phillipa Soo to Utkarsh Ambudkar. It helped us inhabit this great American melting pot.

AD: I feel like if this movie were made 10 years ago, the jokes from the supporting characters would be dependent on the race of the actor. That’s something that I really picked up on that we haven’t really seen before.

SP: That was very important to us. Natalie was very conscious with that and I always had her back to keep that relevance. There’s a scene early on where Geraldine’s character, Lucy, gives Utkarsh a piece of advice and he uses it and doesn’t give her credit for it. When we were tightening the movie, that scene was something to be on the chopping block. Utkarsh tells Lucy that she is his secret weapon in sort of this condescending way. I wanted to preserve that because that’s so much of the problem of the #MeToo moment that we are in now as anything. I can’t tell you how many times I’ve heard from women in the writers’ room who are producers who have their IP stolen from a privileged male perspective. There are little things peppered throughout the film that show that this wouldn’t be as relevant 10 or 15 years ago.

AD: You can tell that everything with this film was dealt with the utmost care. The film has a real feminist heart to it.

SP: I would say that there is a feminist heart to this and we should embrace it. The casting directors, Jennifer Smith and Lisa Zagoria, were fantastic in finding LGBTQ people and people of color.

AD: I wanted to know about the challenges of editing something with a good amount of improv. I had heard that there was some on this set.

SP: Before I knew who was cast, Natalie asked me to come on early and I gave some notes on the script and gave some perspective that I had on comedic film and television. I had worked on shows like Flight of the Conchords and Veep and Parks & Recreation, and all these shows have tremendously talented improv actors. If given the opportunity, they will fill an awkward silence with something funny. And that’s in the script. I told Natalie one of Judd Apatow’s trademark moves. Once you get to the third take of a scene, you give the actors an improv take.

SP: Yeah. Let them do whatever they want. Either speak the subtext or things played around in rehearsal. I would have the scripted version of the scene pretty much intact. Then Natalie gave the actors a “fun pass,” especially the actors who are great at improv like Geraldine or Utkarsh or Ego. I think Dacre Montgomery may have felt a little left out because he said, “These people are so good and I’m not sure what to say.” Natalie told him that he is doing exactly what he needed to by being the guy that can go along for the ride. I often find that unless the writer is married to every comma that’s written on the page, I think we can make it more real or make it funnier or more ludicrous.

AD: It doesn’t feel like improv. It’s not like the scenes are going on too long. That easiness that Geraldine brings to that totally fits in with the character of Lucy.

AD: It only makes her more lovable and more magnetic.

SP: She’s vivacious. People who have the tendency to speak their mind when they ought not to, which happens to Lucy a lot in this film, you’re instantly empathic towards them.

AD: Is there a sequence or moment in the film that would feel totally different if it were edited a different way? I love the scene at the very top of the film where Lucy recounts how her night went, and it cuts back and forth to us seeing it. I feel like that could change the tone if it were handled differently.

SP: That’s a very good question. A lot of scenes, to varying degrees, were changed in the course of tightening them down. Or getting to the essence of scenes. What’s written on the page is written without knowing what actor can bring with the subtext with just a good look. Whenever possible, if I can remove dialogue in the favor of something that’s more than just the written word that employs the vocabulary of cinema—from a good angle or a blocking choice—can speak volumes more than an entire paragraph. I look for that. In every show I do, the end product has evolved from the beginning.

AD: I imagine it would be really hard to shoot something so strict from the page.

SP: Yeah. There’s a fight scene at the end of our film that, as written, it was more Lucy lashing out at Nick. I found a lot of stumbling interjections that he was trying to do in a couple of takes so he could get his point across. I thought the dance of that scene needed to have more than one beat of his. He needed to try and justify his position to have equal footing in the fight scene, and it wasn’t written that way.

SP: He originally just sat there and took it, but I didn’t want any of the characters to feel like doormats. So, in the editing room, Natalie and I looked at different takes from that day, stitching a number of them together to balance out the scene. That’s an instance of how I would like to react in that situation and tried to balance out the scene. As you pointed out in the beginning, it wasn’t originally written that way with the narration but it works that well that way. There’s economy of storytelling where you can collapse eight scenes into eight moments in a retelling and keep it moving forward without going through a day in the life. The first 10 minutes of the film was originally plotted as a linear storyline.

AD: Oh…that would be so different.

SP: Yeah. It worked, but it was not as dynamic. We found a way to take the footage we had and augment it to keep the audience from being two steps in front of the characters. There were delicious things in those scenes that we wanted to set in the confines of the retelling from the perspective of Lucy’s narration in the cab. It was a great choice that we all came up with together. We had to bang our heads to get the story going.

AD: I thought the beginning was so charming. I couldn’t imagine it being done in another way, so I’m glad you changed it! (Laughs)

SP: (Laughs) She’s recounting it in a way that we relate to her. We find the situations bad but we get more insight into her character, and we can see how Dacre’s character can be the voice of reason from the get-go.

AD: We get some awkwardness in this movie that is really fun. Towards the end there are some deafening silences that wouldn’t work if a scene was cut too short. What We Do in the Shadows, another show you’ve worked on, does that so well. Can you talk about stretching out those awkward moments?

SP: You’re right to point out that Taika Waititi and Jemaine Clement love to be able to stretch out awkward moments. There’s nothing that will make Jemaine laugh more than watch someone suffer under that duress, and it’s fun to create, too. That was a choice that I made having worked with those two and, to a degree, Judd Apatow. I find that good comedy editing makes emotional scenes pay off even better. In the penultimate scene, I did open up and play that tension and leaned into that silence so we can earn the ending.

The Broken Hearts Gallery opens in select theaters on September 11.