In keeping with that proud tradition, the film is set within a very particular world with its own set of rules (think Athina Rachel Tsangari’s CHEVALIER, Yorgos Lanthimos’ DOGTOOTH, ALPS or THE LOBSTER). In this case, it’s a world where amnesia strikes without warning and leaves many otherwise functional people with no idea who they are. Patients who are unclaimed by family end up in the care of specialized hospitals and have the choice to start creating a new life from scratch by following a program devised for this purpose. That is what the nameless protagonist, a middle-aged man with a wiped past (played by Aris Servetalis), decides to do. And so he gets set up in a new apartment, carries out various assignments from tape recordings and starts filling out a polaroid album of his collected experiences. It all goes as cutely, whimsically as can be expected, until you realize something’s off that shifts your perspective on the whole story.

Nikou’s script (co-written with Stavros Raptis) is instantly appealing and packs a subtle emotional punch. It’s obviously not the first one to deal with memory loss, but instead of milking that premise for thrills or easy tears, it describes the implications of memory with childlike fancy and arrives at an observation of the human condition that feels piercingly tender.

As is the case with Lanthios’ idiosyncratic screenwriting that has charmed and shocked the world, the trick is in the details. I love the way they design one of the memory tests that reminds you how our mind builds these deep, indisputable connections between a melody and an image. And how inexplicably funny/horrifying it is when one misses that association. I love how the polaroid camera becomes an everyday accessory for all these cheerful amnesiacs wandering the streets. A sight both otherworldly strange and tongue-in-cheek satiric of our Instagram-or-it-didn’t-happen era. 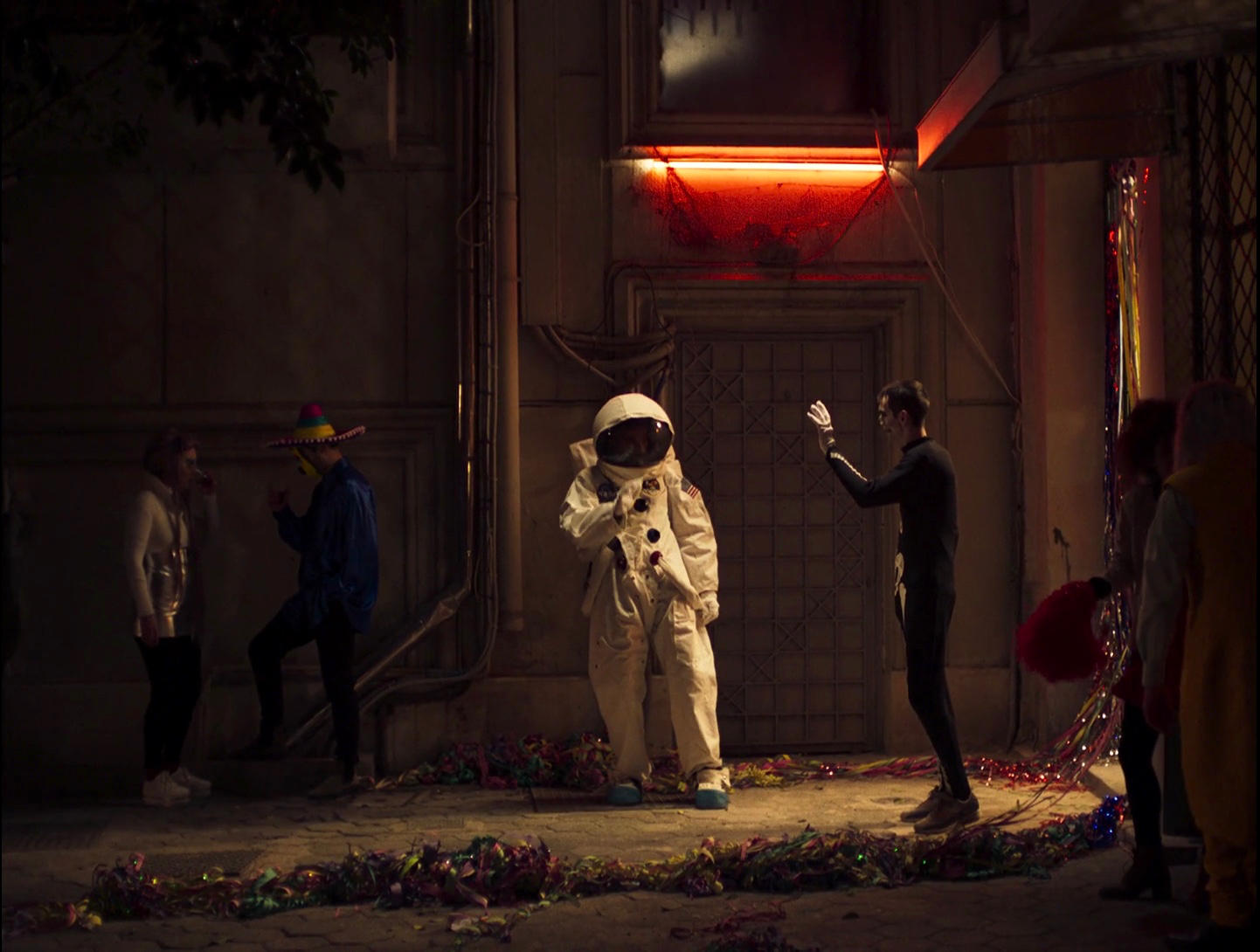 One doesn’t need to and shouldn’t bother to look for “bugs” like how the patients would know where to go home to or the people they’ve met along the way. This is by design not a film that rests on ironclad internal logic but one that invites you to consider, from a playfully bent angle, what it means to remember. And I’m on board the whole, surreal time.

With APPLES, Nikou also establishes himself as a very effective visual artist/storyteller. The film looks lovely for one thing. Striking, markedly linear production design frames an eerie mindscape of hollow, untrustworthy beauty. The sepia tint and old-school aspect ratio reinforce the impression of fading photographs, nostalgia, transience. The image composition is also impactful. Nikou demonstrates a knack for noticing the awkward and absurd in life. Whether it’s a grown man purposefully riding a kid’s bike or someone silently chickening out of a 10-meter dive, he sees what’s funny in an otherwise ordinary situation and has no problem capturing that through careful, precise mise en scène. Then there are the apples as the aesthetic/metaphoric cherry on top. The protagonist’s favorite fruit not only serves a pivotal plot point in revealing what really goes on in his head, but is turned into an evocative visual cue for all that bittersweetness hidden beneath the rosy skin.

Lead actor Servetalis is great, navigating a narrow register of outward emotions mandated by the character to both comedic and dramatic effect. His unaffected deadpan communicates the dry humor of the script perfectly and proves revelatory once one learns more about this reticent, quietly intense man. When we see him on the brink of tears at a funeral late in the film, nothing more needs to be said about his pain, regret and newfound resolve.

While not quite the flat-out jaw-dropper like DOGTOOTH (still the best Lanthimos in my book), APPLES is reminiscent of that tragicomic masterpiece in its integrity of vision, faultless execution, and announcement of a new, unmistakable talent. We shall be hearing more about Christos Nikou after this swoon-worthy, thoroughly seductive debut.