Being a longtime admirer, it’s a particular thrill for me to receive accreditation to cover the Toronto International Film Festival this year. Obviously it’s a very special edition – the festival has significantly trimmed down its program, cut back the scale of on-site public screenings and moved all press screenings online – so I’ll be missing out on a lot of what typically makes up the TIFF experience. But considering the health risks involved, I do think they’ve made the right and responsible decision.

In any case, I’m happy to report that my first-ever TIFF started off on a high, heavenly note with Indian writer/director Chaitanya Tamhane’s sophomore feature THE DISCIPLE. It’s a stirring cinematic tribute to Indian classical music that gradually reveals an unexpected multitude of layers. The fact that Alfonso Cuarón serves as an executive producer does not surprise. Like ROMA, this is filmmaking at its most personal and authentic, pulsing with a deep, genuine love for one’s roots.

We first meet the titular disciple Sharad at 24, sitting on stage next to an old man in the middle of a performance. What the old man is singing in this opening scene is completely foreign to me, both in terms of lyrics and the unfathomably complex, free-flowing melody. But you are immediately entranced by the technique, the voice, the force of conviction. From his rapt, admiring gaze, you can tell Sharad feels the same. Later we learn that Sharad harbors the wish to become a singer himself. He practices with the old man as guru, tries out at competitions, and listens to instruction tapes as if his life depended on it. It’s a lonely, often discouraging pursuit, as we see how Sharad distances himself from his family, remains bitterly single, and must face setbacks time and again. An hour into the film, we jump forward in time to meet Sharad at 36, and insights into the true scale of his struggles and disillusionment come to light.

The reasons to love THE DISCIPLE are numerous. For a start, the film looks and sounds incredible. Polish cinematographer Michal Sobocinski lets India speak for itself in crisp, naturalistic images. The interior scenes live and breathe the incensed elegance of an ancient culture, while many of the exterior scenes really take your breath away. A lakeside concert set against the backdrop of impossibly blue skies, in particular, epitomizes the spiritual nature of these performances. Pristine, boundless, enlightened in every sense, you take in the view and think “I get it now”. 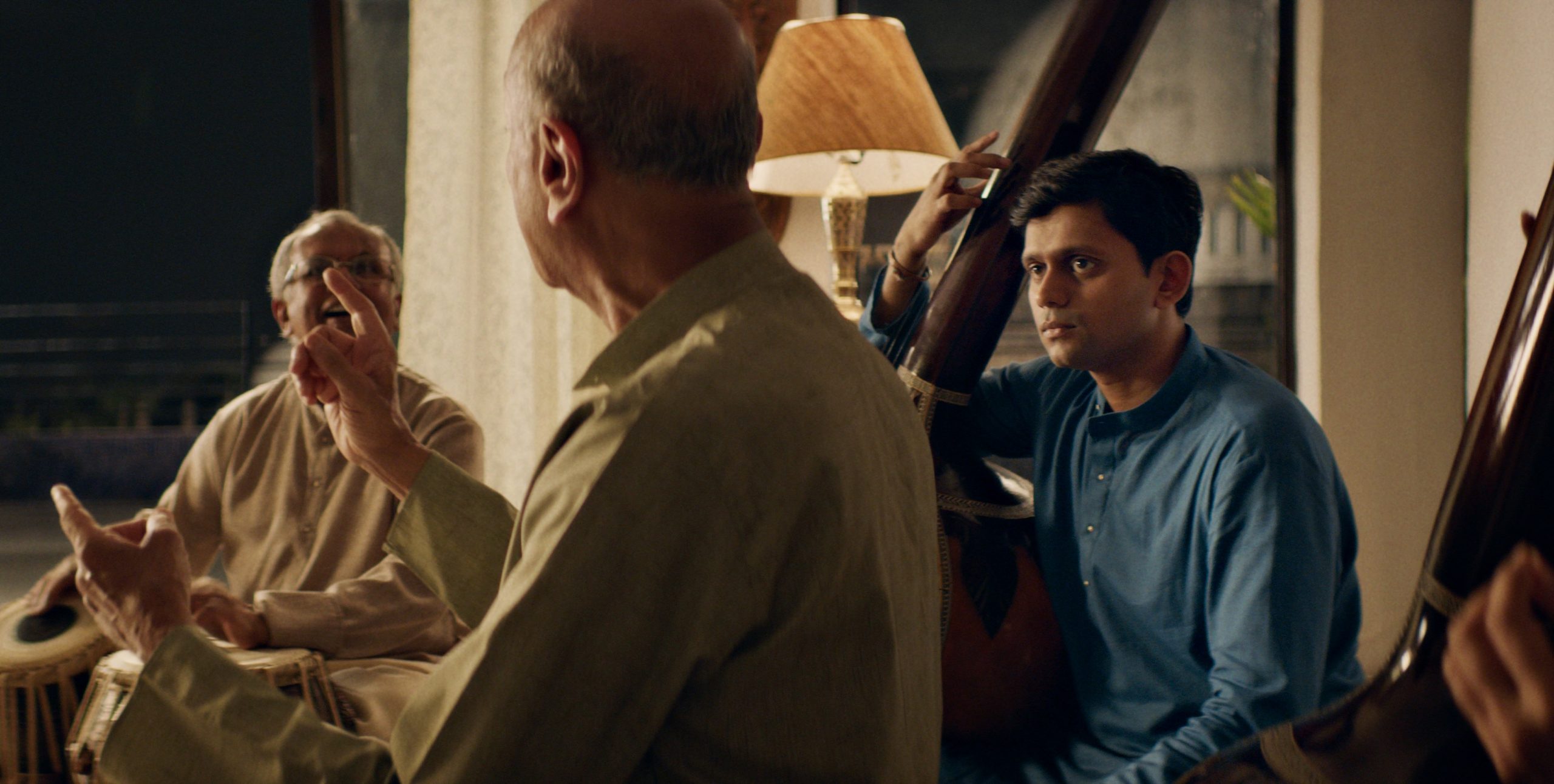 And the music! I didn’t know anything about the type of improvisational music performed in the film called raag beforehand, and it is stunning. Over the course of the film, we see Sharad, his guru and other performers take on various raag compositions, which requires them to interpret established texts in highly melismatic form. The performances draw attention to the insane vocal acrobatics (some of them would give Beyoncé a run for her money) and have an overtly theatrical effect. But there’s so much more to it than that. As with jazz, hip-hop, salsa or Chinese opera, music has always offered the most immediate, singular, sometimes exclusive access to the essence of a culture. And with raag, you learn that it’s the devotion and discipline underlying the cascades of notes that count. There’s something so beautiful about the precision and focus required of the singer, about being absolutely at one with a song, that hits you not just on an acoustic level, but the spiritual one as well. As pointed out on one of the tapes that Sharad obsessively listens to, raag is an eternal quest for perfection, for the truth. And you feel that with every rousing, hypnotic performance and every failed attempt at it.

Building on top of Sharad’s quest, THE DISCIPLE gently expands its thematic reach to such questions as the price one pays for believing in something in life, for holding on to an ideal despite hardships and temptations, or how one deals with dreams unfulfilled, with seeing one’s idols fall. In quiet, dramatically toned-down flashbacks, we learn about the influence that Sharad’s father had on him and a fateful meeting that Sharad had with a music journalist. Tamhane wisely chooses not to milk these reveals for quick emotional payoff. Instead, he lets them fill out the character in a subtle way that renders the stoic, seemingly indefatigable Sharad infinitely more substantial, compelling.

Tamhane’s direction is altogether refined and exceptionally assured. Without ever resorting to showmanship, he describes some of life’s biggest challenges and mysteries in intimate, unhurried prose. In the final scene of the film, we gaze down the carts of a rumbling train where an older Sharad is seated as a young musician sings his heart out going down the aisle (for money? for recognition? for a dream?). It’s an immaculately composed shot that, for all its simplicity, holds so much meaning and understanding it makes you sigh. If this ending is anything to go by, we’re looking at a master storyteller waiting to be discovered.

Tilda Cobham-Hervey Is Helen Reddy in 'Woman,' Hear Her Roar