When you’re watching a film about a Chukotkan whlae hunter, you don’t necessarily expect it to open in a seedy cam-girl center in Detroit while Johnny Cash croons in the background. I literally had to check if I accessed the wrong film by mistake. But such is the delicious surprise that awaits you in Russian director Philipp Yuryev’s feature debut THE WHALER BOY, another great find on my journey of discovery at this year’s TIFF.

The film is set in a remote village on the Bering Strait separating Alaska from Chukotka on the easternmost tip of Russia. Teenager Leshka (Vladimir Onokhov), like most men in the village, works at and lives from the sea. Life consists of little else besides hunting, horsing around with his buddy and caring for his grandpa who’s blithely convinced of his own imminent death. Such lifestyle has probably existed for centuries in this isolated part of the world, except for one detail: The men have discovered the wonder of internet and girls who are not shy to show themselves on camera from a faraway place called Detroit. For Leshka the reason for visiting Hollysweet999 online goes beyond the obvious, though. He feels so drawn to the girl that one day he sets off to find her in America.

This is a brilliant premise for a movie and Yuryev delivers on that promise big time. His screenplay is minutely observant, unafraid to explore various themes and truly original. On the one hand, we have the setup for a road movie that’s both silly and exciting. On the other hand, the story wonderfully captures the myth of America as the haven of liberty and harbor for restless souls everywhere looking to escape. All of that is somehow wrapped up in a gorgeous coming-of-age tale that maps the protagonist’s journey in every sense of the word.

Like a beached whale, Leshka is trapped. Stuck in the middle of nowhere, he carries out the same chores in an endless loop out of necessity and duty. What does he see in someone who seems to be living on another planet and always so entirely, uninhibitedly herself? Besides sexual attraction, the script convincingly suggests that it’s freedom, or at least the idea of freedom, that eventually compels Leshka to go on his impossible quest. What happens in the third act, then, including the changes in Leshka’s perspective, comes across as all the more meaningful and moving. 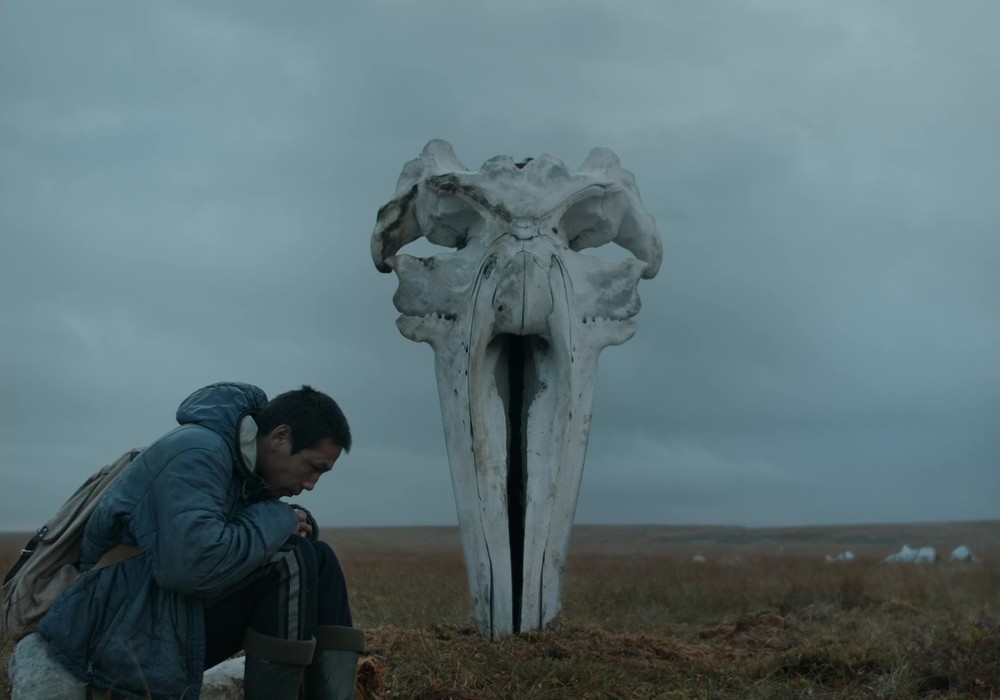 The Chukotkan setting is itself a source of marvel. Being in such a far-flung corner of the world, it has retained landscapes and cultures seldom seen on screen. And Yuryev made sure you notice that. He describes the unique surroundings and way of life portrayed here with acute attention to detail and texture, creating a keen sense of place that’s immediate, transportive. The way he juxtaposes the innocent beauty of Chukotka and the Detroit brand of despair is also very effective. From the first time the camera cuts from the confident, teasing showgirl girl to a group of awkwardly aroused fishermen, humor is part of the narrative. But the comedy is never condescending or sarcastic. It doesn’t make fun of any of its subjects, but uses the heightened contrast to give context to Leshka’s experience as a young man coming into his own.

In the second half of the film, its tone shifts from the lighthearted to the more serious and contemplative, which Yuryev executed surprisingly well. There are elements of adventure that are rendered with harrowing authenticity. And the way Yuryev approaches the metaphorical, even mythical aspects of Leshka’s journey in the final stretch impresses with its light touch. Nothing heavy-handed is in play, I sense only love for the character and a profound understanding of what it means to be free.

First-time actor Onokhov is a stunner. There’s something so unpolished and magnificently unselfconscious about his presence, his movements that makes everything he does highly watchable. Even when he’s just roasting and tasting marshmallows under a rock, you find yourself captivated, indeed mesmerized by the utter truthfulness of his body language. Probably my favorite male performance of the festival so far. The two cinematographers Mikhail Khursevich and Yakov Mironichev are also making their feature debut with this film and their work is equally astounding. By capturing the endless expanse and the untouched ancient appeal of Chukotka in wide angles and naturalistic light, they’ve created visual poetry that will be hard to forget.

It’s weird to cover film festivals remotely. You watch films, think about them and write about them all by yourself. The whole thing can feel like an exercise in self-isolation. But when a film like THE WHALER BOY (or, say, NOMADLAND) comes along, it conjures such a strong sense of connection to our fellow human beings, to people on the other side of the Earth with whom we share the same hopes and struggles, you realize with gratitude that you’re never alone, which may be the most rewarding feeling of all.

by Sasha Stone
108
No Result
View All Result