The 2020 BFI London Film Festival has just gotten underway in the British capital, or any laptop anywhere at all in the known universe with a VPN. This year, the festival takes a familiar form among its ilk, with a hefty slate of online offerings to open up its reduced programme to as wide an audience as possible. The BFI has also expanded its physical presence beyond London’s borders, hosting screenings in arthouse theatres across the UK. Their message to British cinemagoers, as the UK’s cinema scene suffers closures and layoffs, is that the film industry remains open to all, even if they’ve only managed to procure about 20% of their usual LFF offerings.

I’ll be Awards Daily’s voice from the frontlines, its view from the parapet, its dispatch from the heat of battle once again this year, bravely venturing forth from my mattress to my sofa to report on the most pressing issues in this revered cultural hub, my apartment living room. What are the movies at LFF 2020? Who is in those movies? Exactly what are those movies even like? And, perhaps most importantly of all, who cares? 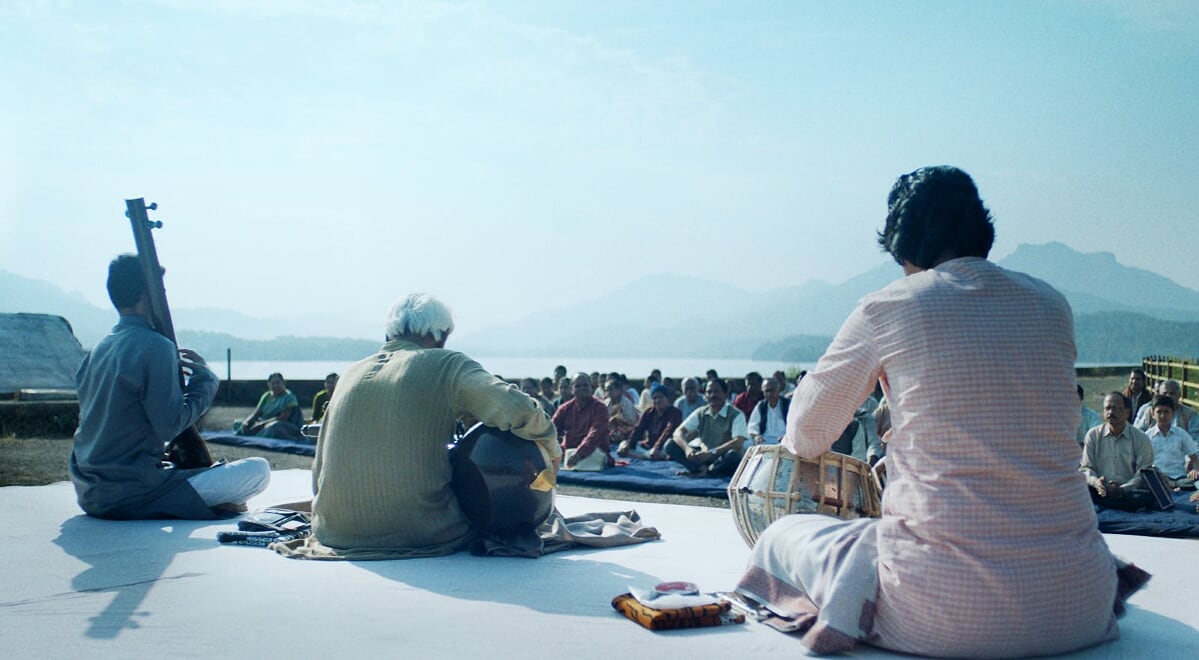 Cate Blanchett’s Venice Film Festival jury gave this austere drama their Best Screenplay prize, which was a fine choice, it turns out. This is a smartly crafted film, patient and methodical in laying out its ideological stance. That stance is an unusual one for a film to take, essentially arguing that artistic dogma and rigour are suffocating shams and that the only path to a meaningful existence is to loosen up and let go; it’s even more unusual coming from a film that seems to adhere to common stylistic standards. Tamhane has made an Indian indie that looks, sounds and feels very much like an Indian indie. Yet it’s precisely this quality, of practising one thing and preaching another, that enables him to posit his argument so persuasively.

Consider the films of Paul Verhoeven, as dissimilar as they may seem from a slow, quiet film about a devotee of classical Indian music and his struggle with his art. Verhoeven’s Showgirls only works as a pop culture satire by earnestly engaging with pop culture tropes; his Starship Troopers only works as a fascistic action movie satire by openly presenting itself as a fascistic action movie. The Disciple must convince you of the fundamental value of the lifestyle it protests against if it is to make any kind of salient case of the sort. The dramatic divorce it lobbies for, the brutal breakup between artist and their art, is only dramatic if it’s meaningful, and it’s only meaningful if that art has palpable meaning. So what if it’s hypocritical – its greater sin is that it’s a little stuffy and unimaginative – all the best art is multifaceted anyway! 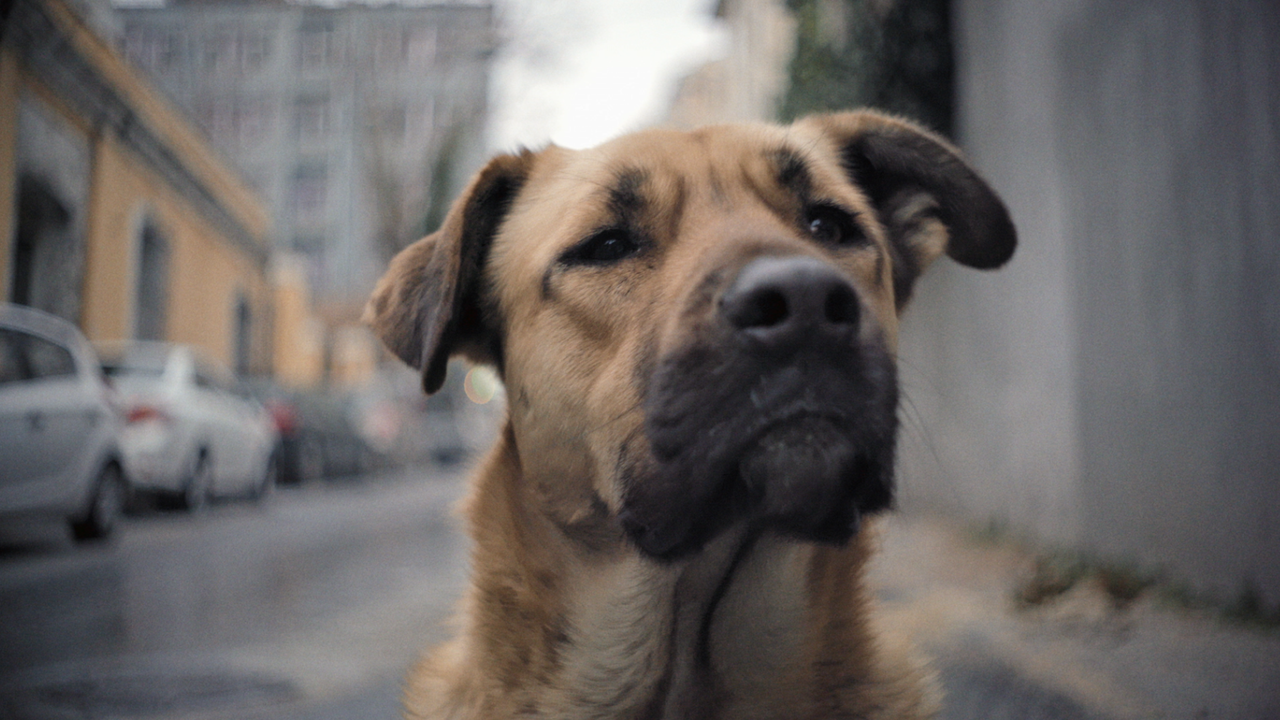 You’d have to really, really fuck up to make me dislike a documentary about a dog, but thankfully Elizabeth Lo doesn’t fuck up at all. Fans of docs about Istanbul-based animals have been well-served in recent years, following 2016’s Kedi, as the eponymous vagabond here is Zeytin, a charming dog of no fixed abode in Turkey’s largest city. By no small margin, she’s 2020’s most adorable protagonist; even better, she’s not this film’s only, as Lo documents the lives of several of Istanbul’s strays, protected by law from the mass rounding-up and killing that was the practice for decades. These days, Zeytin and her companions roam freely and happily, embraced by the locals, and evidently entirely content to permit a presumably human-only film crew from following them around.

Stray is a compassionate, insightful, brief glance into a way of life not exclusive to dogs – though it dedicates the majority of its focus to them, a band of Syrian kids seeking asylum provides it with the majority of its narrative momentum. No March of the Penguins style editorializing here, then, as it pursues a line entirely organic, though not quite non-intrusive. Lo actively allows her presence to be felt when dealing with her human subjects, while letting the animals illuminate their own customs and behaviours. It’s a simple, honest technique for a simple, honest film with an appropriately direct emotional impact. 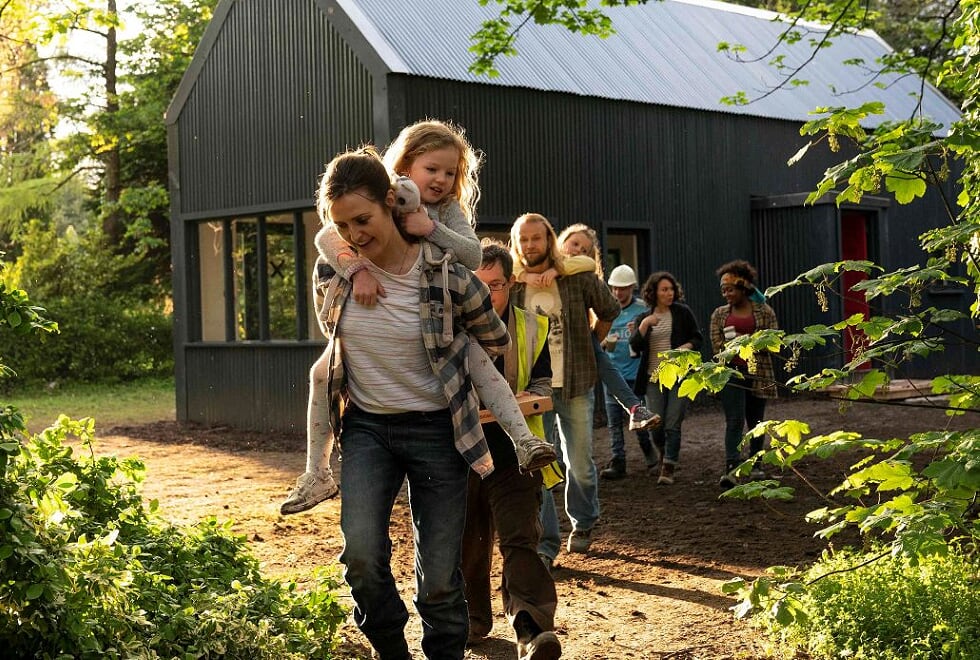 The buzz out of Sundance was that – Shock! Horror! Scandal! – Mamma Mia and The Iron Lady’s Phyllida Lloyd had finally, implausibly made an actual, proper, honest-to-god good film. Herself, the story of a young Dublin woman who takes her two young daughters, leaves her abusive husband and decides to build her own house rather than wait in the staggeringly long line for housing, is certainly shorn of the hopeless amateurishness that plagued her ABBA musical and the political stink that stank up her Margaret Thatcher biopic. But an actual, proper, honest-to-god good film? Not quite… Herself undoubtedly has its heart in the right place as a piece of straightforward social realism, but it’s leaking blood in several places, and only makes it to the credits in one piece through sheer good faith.

I’m all for working contemporary popular music into a soundtrack, as films of bygone eras once did with marvellous abandon, but mom-pop tracks played in full over montage sequences is high-school stuff at best. And, while sincere, Herself’s socio-political commentary is ham-fisted, belabouring specific emotional points while neglecting crucial narrative details. It’s all going fairly winningly until an unfortunate courtroom sequence, where the screenplay’s silliness boils over and soddens the whole film. Once its myriad clichés can’t be dismissed, once they’re confirmed as inalienable parts of the film’s design, it’s up to that sheer good faith to hold your attention to the end. Lloyd’s film trajectory continues on the up, though by one minuscule motion after another, and with minimal frequency. 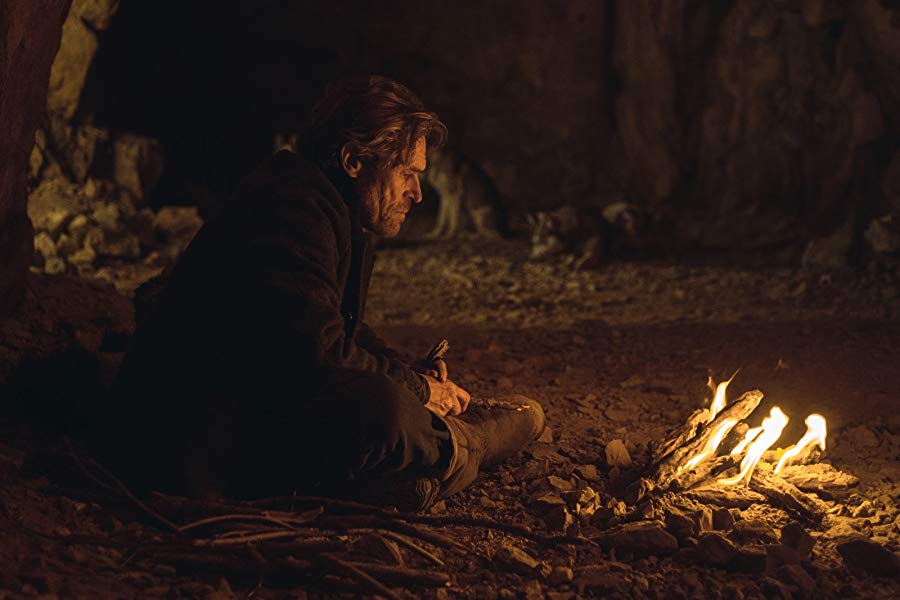 What Ferrara’s latest will allow you to make of it is, alas, all you’ll ever be able to make of it. It’s odd rather than abstract, silly rather than strange, and simultaneously simple and incomprehensible, blunt and ambiguous, an unprovocative provocation. Ferrara has long thumbed his nose at the conventions of cinematic technique defined and/or refined by his contemporaries, while declining to dismantle the masculinities that lie within key tenets of that technique – indeed his work is fuelled by it, it seems to exist on pure, raw masculinity, never from concentrate. Siberia purifies this further, as though turning liquid testosterone into a gloopy semisolid, and wading through it is – who else? – dear Willem Dafoe. Ferrara clearly knows he’s the only man who could make any of his macho musings work, and most definitely he does.

It seems somewhat preposterous to criticize Siberia – it’s entirely the film it was intended to be. If Ferrara’s inevitable casual sexism is off-putting, there’s a sense that he at least now knows it’s going to be legitimately off-putting, an acknowledgement of his artistic failings that courses through this film like a slow-acting poison, turning his semisolid testosterone into an acrid husk of a once-virile matter. Siberia projects boldness and hardness, then succumbs to its flaccidity and impotence, and surprisingly accepts it. It’s a tough film to like, but it has no designs on likability, which is entirely unsurprising.