Cancel the Oscars? How About We Reimagine Them

April 2021. Think about that for a minute. I mean, really think about it. We’re not even through Fall yet. Then we have to get through Winter and the most chaotic, dramatic, high stakes election in most of our lifetimes, and finally Spring will arrive and with it, whatever remains of the Oscar race.

Even though Oscar Night is way away in April, the fear and panic over Covid sees no signs of slowing down. At least this is true on the left as we barrel towards an historic election. All things are political and all things are partisan even and especially the Oscars. That is why Washington Post opinionater Alyssa Rosenberg offered up an overreaction that — despite the Emmys finding a way to cope — we should “cancel” the Oscars.

I can see where she’s coming from. But I’d like to argue that rather than cancel the Oscars, we should all rethink how we engage with them. Not only those of us who cover them, and our thousands of friends who follow them avidly, but let’s consider the entire industry that has risen up around the concept and the passion of Oscarwatching, of which I will take part ownership, having started way back in 2000.

This is Reality, Greg

Right now, as of this moment, there is no Oscar race. There is an imprint of where the Oscar race should be. As there is every year in October, there are already performances that are good enough to be placed in the Oscar race. We could kind of, sort of compile a list that would look not all that different from lists in previous years because of the durable pipeline that’s been built between publicity and Oscar coverage. Some of us have been doing this so long we’ve worn a groove. But there is just one problem. The bottom has dropped out. The light at the end of the gauntlet is dim.

I know what you’re thinking. It’s just temporary. Everything will be fine. It will all be fine. At some point things will kick back into gear and people will start watching movies again and maybe even venture into a theater or two. Unfortunately, though, too many people on the left aren’t yet ready to frequent movie theaters. And since so many on the right have turned their back on Hollywood, movies must increasingly rely ticket buyers on the left. Imagine if more movies were made for people on the right (more Left Behind movies! More Rambos cum American Snipers!) Then we’d have no problem filling seats. But we don’t live in that kind of world, Thelma.

The world we live in is one where people were comfortable with its insular nature, because there wasn’t a problem. Hollywood could make movies for audiences while the smaller studios could make movies for Oscar voters. Custom made meals created for specific tastes — as one would a separate section of an airplane. Of course, the general public is always welcome and invited into the world if they so choose. But who are we kidding. They very rarely so choose. Too many right-wing leaders have told them that Hollywood is their enemy, and too many right-wing followers believe it.

But now the virus has slammed every door shut on everyone. For the foreseeable future, it’s flattened whatever was left of our Oscar race. At the same time, the rules on the Oscars and on art have never been more strident. Hollywood largely creates and complies with these rules out of fear. Fear of a loss of revenue. Fear of public humiliation. Fear of the mob. But how do you police an Oscar race in a year that is barely there to begin with?

On the one hand, this would be a great time to start everything over from scratch. On the other hand, perhaps we can kick the can down the road to see just how strident and utopian this race can become. Will the filmmakers find acceptable ways to meet all of the diversity requirements so that Twitter will give them a break when the entire industry is struggling for what’s left of its life?

I don’t know the answer, my friends. But as usual I can’t lie to you, dear readers. I can’t pretend that there is an Oscar race where there is none. There isn’t an Oscar race this year because there isn’t a broad enough audience — even an arthouse theater audience — not enough to view and evaluate enough films. A healthy film industry doesn’t make movies aimed at critics or even for industry voters. This isn’t haute couture Fashion Week. It isn’t supposed to be. These aren’t supposed to be exclusive events for tastemakers, though we can’t deny that is exactly what it has become. No, the Oscars are supposed to be an event that bridges the gap between the industry and the public for whom movies are ostensibly made.

The reason the Oscars used to be held so late, in March or April, was because movies were released to the public and public reception was an important factor in assessing a movie’s value. The public had the final say. Movies that had high Oscar hopes were still supposed to be made not for critics, not for the industry, not for bloggers, not for Twitter — but for audiences. Who would faithfully show up, slap down their hard earned cash, grab a bucket of popcorn and enjoy the ride.

Back then, the end of December, with the premieres of holiday fare, meant the end of the entire year in film. In January and February, the ticket sales either grew or else faltered. The Academy would then decide which five films stood out. Which performances were the best. The public was in on it because their vote also counted. It counted with box office. When I first started covering the Oscars that is how it went down. We waited. We waited and waited and waited. So much so that if you go to the Wayback Machine and you look at Oscarwatch from 2002 (they changed the date in 2003, pushing everything up a month to February, and inadvertently selecting the audience out).

In those days, in November, Oscarwatch (now AwardsDaily) only jotted down films that seemed to be likely Oscar contenders – we did not predict them. This is what that looked like the year Chicago eventually won Best Picture. 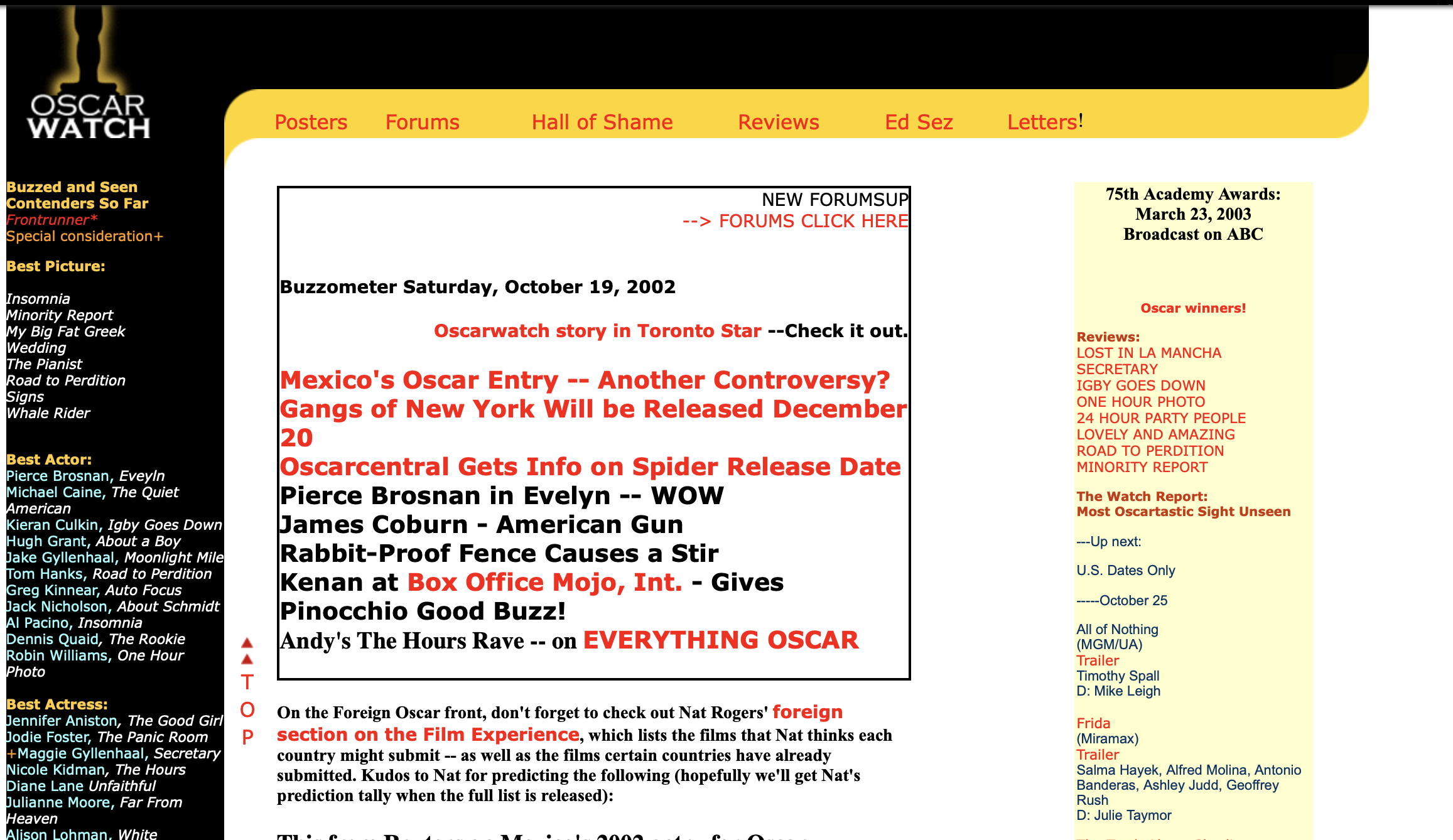 And here are Kris Tapley’s very early predictions from that same year in October: 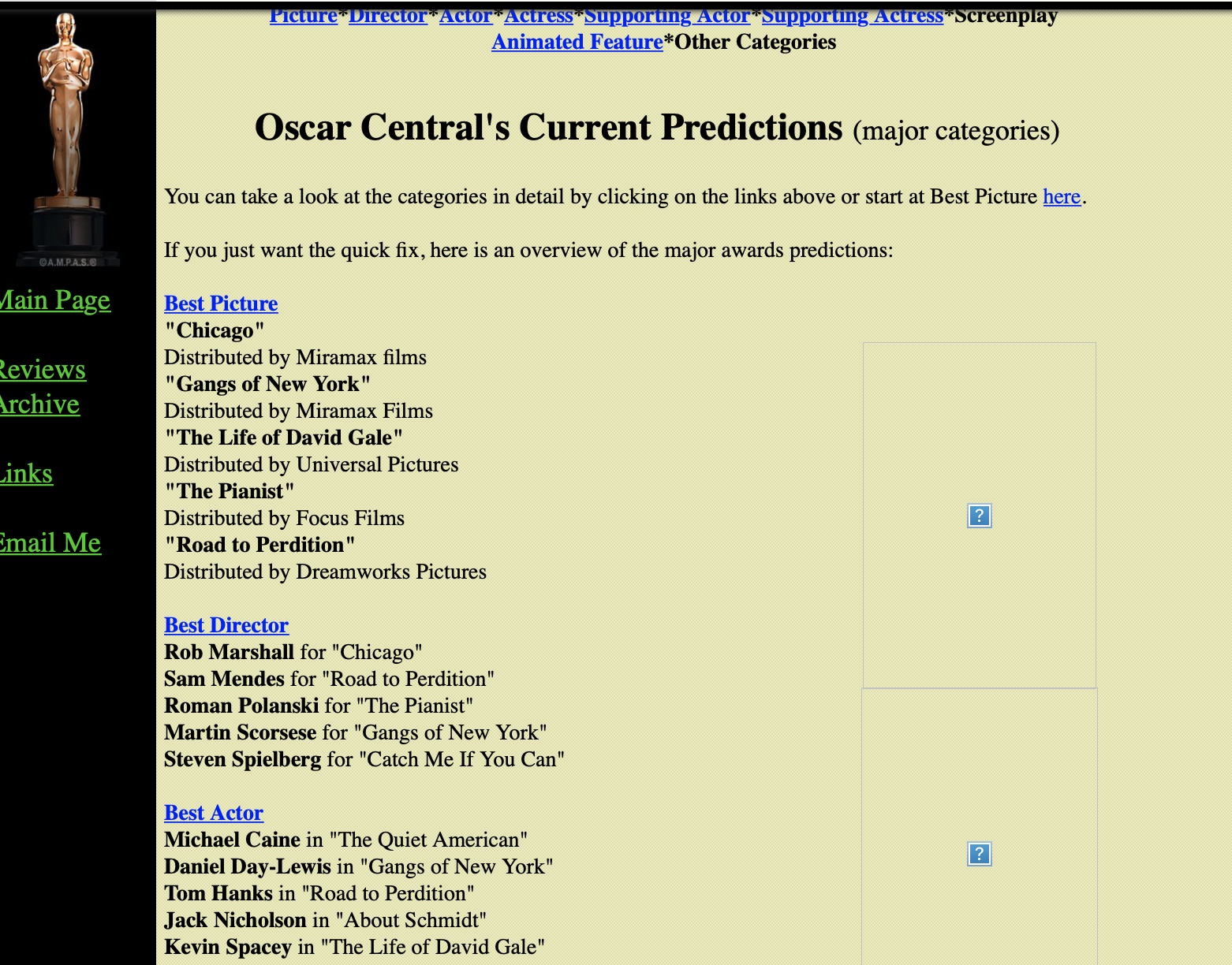 Then by late November this is what that looked like: 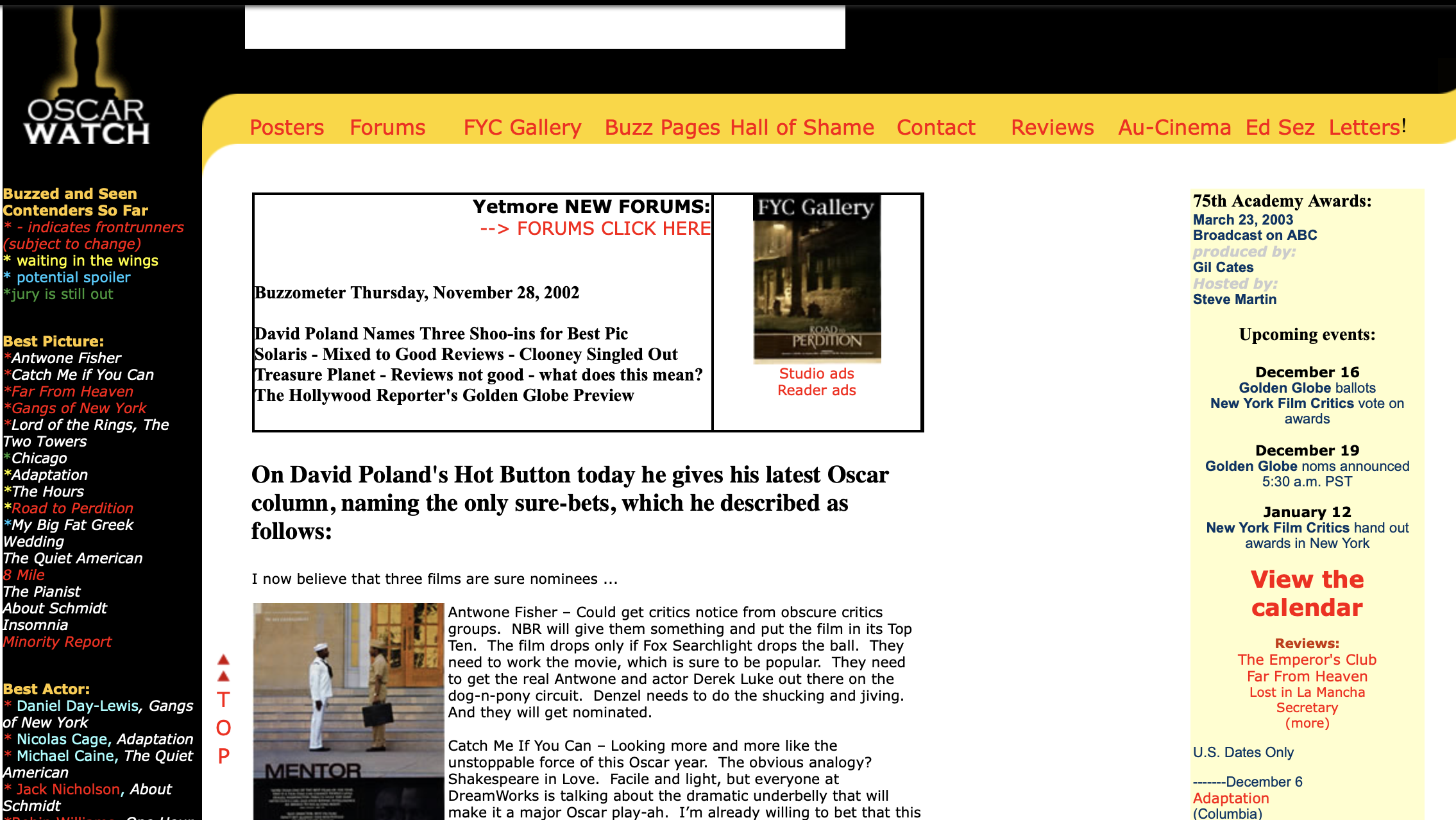 Note David Poland’s three sure bets for Best Picture. None of them made it in. Unfortunately I have no December flashbacks but here is what it finally looks like in January. 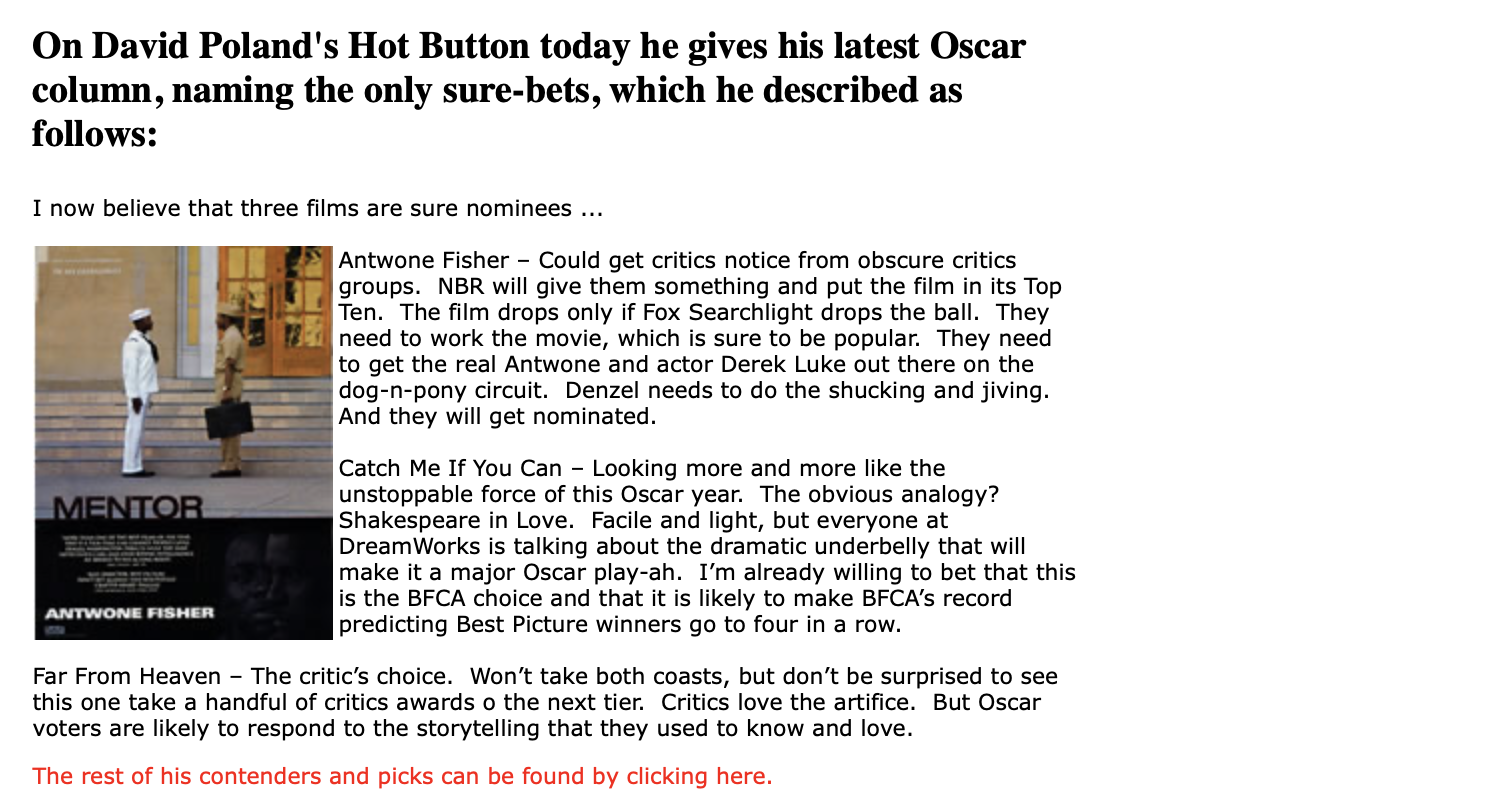 By late January, we had nailed down all five Best Picture contenders except for The Pianist.

That is how unpredictable it was. Back then, we were FOLLOWING the race, not leading it. The Academy, not us, not the critics, did the deciding and they did it by keeping tabs on audiences. The Two Towers got in because it made a lot of money and was popular. The Pianist got in because it was critically acclaimed. Chicago won because it was liked by both audiences and voters. You might dismiss this but this was one of the last remaining years when you could walk into a bar and tell someone what won Best Picture and they would know what movie you were talking about. Because movies and the Oscars that awarded them were a communal experience back then.

Now, the players in the Oscar race ar virtually pre-ordained by OCTOBER. The presumptions are then confirmed by November, with very little wiggle room. By December you are talking one or two slots that might end up in a surprise. All before most moviegoers ever get a glimpse of the contenders. That is way too much control in the hands of people like me and not enough of a open field for filmmakers to thrive and for audiences to participate.

The Oscars should not be cancelled

But perhaps this year, the Oscar machine can be reminded of our proper place in the process. Our place is not to make the race, invent the race, or fulfill the wishes of publicists. Our place is to watch, track, predict and analyze the race — and what that will require is for us to step back from micromanaging trajectories and outcomes, and allow once again for a healthy relationship between studio offerings and audience acceptance. Rather than approach the race by winnowing all movies down to “Oscar movies,” maybe now we can macro out and think about destroying the dam that traps films into a reservoir.

If movie theaters do not open up in time for there to be a pipeline from studios to audiences, then it will become important to expand audience participation via streaming platforms. That isn’t going to be easy because instant reaction to streamed movies will depend on Twitter, and Twitter is not only completely insane, it’s INSANELY insane. Constraints on what’s deemed acceptable is always a mess, and the mess is magnified when viewed through the distorted prism of Twitter, since so many of the loudest voices are all about policing art, looking for any problematic aspects that someone can turn into a clout tweet.

Once a film is raked over the coals how does it make any sort of impact in a race that involves no actual physical audiences that can often override the insanity of Twitter? To tell you the truth, I do not know. But I do know that if it were me, I would rethink the whole thing. It would be the Oscar race but the Oscar race in the era of Covid.

How can that benefit the industry? How can it benefit audiences? Well, by standing up for art. By turning this stressful era into an opportunity to remember what it means for a movie to be great — as opposed to movies that serve a specific effort to heal a wounded society. Can we in our industry, and film critics, use this moment as an opportunity to bring more people into the world of great movies? To revive what defines a great movie? To reexamine what we mean when we say it’s great?

I know, I know. We can’t get out of this trap that easily. We’re going to need a lot of lessons and we’re going to get a lot of lessons. But if the Oscar race is still on, I am going to do my best to give you, dear readers, to dive as deep as I can go. We’ll be doing our darndest to explore what defines great cinema — running up and down the boulevards screaming about great directing, great acting, great writing — and at the same time, we’ll make every effort to put these films and these filmmakers in the context of cinema traditions and that arc of Oscar history.

No doubt the old game will someday return. But let’s not move through this time of turmoil without remembering what art is for. What films are for. Why they are made at all. There may be too many people covering the Oscars. There are certainly too many people trying to micromanage them. There are too many restrictions on artists. What we need is to tear it all down, toss what’s unnecessary, keep what’s essential, and rebuild the whole shebang back better. But we’ll never be able to do that unless we can first face the hard truth.

"The Stuff Of Which Fairy Tales Are Made..."