I have a somewhat conflicted attitude toward my homeland of Ireland and its myriad contradictions, as baffling to outsiders as they are commonplace to Irish nationals. I love the humour, the climate, the general temperament, but I’ve little time for the provinciality, less time for the potatoes, and immunity toward the apparent “charm” of the landscape. And as winsome as many find traditional Irish artistic expression, that too tends to leave me cold. So it’s by no small miracle that I was warmed right up by Cartoon Saloon’s Wolfwalkers, which might have run away with next April’s Animated Feature Oscar had Disney not opted to bring Pixar’s Soul to American homes this December. Of the Irish animation studio’s four features to date, Wolfwalkers is Cartoon Saloon’s third set on the emerald isle, and their third to educe in me a certain national pride that I’d likely loathe in anyone else.

Then, nothing quite gets my emotions flowing like a good cartoon. Central to Wolfwalkers’ excellence is the quality of the animation, drawn with the Studio Ghibli method of simple characters – their features broad and plain, every nuance of feeling etched out for all eyes, big or small, to see – before stunningly detailed backdrops. The mix of styles isn’t precious, but authentic and effective, fluidly evoking the feel of locations and the mood of scenes, ever adaptive to the demands of the moment. Plot-wise, there’s a similar flexibility, as the film feels like it could take any available route toward any available conclusion, so the mounting narrative stakes are never less than serious. That’s achieved through commitment to complexity of character, and acceptance of the thorns in its historically based scenario, which is never rosied up for the younger audience. In tandem, there’s the ever-ready Irish humour, curt and deprecatory, leavening the mood at a moment’s notice, and a surprisingly subtle message about the difficulties of growing up, of maturing, of coping with new needs, new urges, new challenges. It seems there’s no challenge too great for Cartoon Saloon, as they go from strength to strength, staking a claim as the world’s most consistent animation studio. 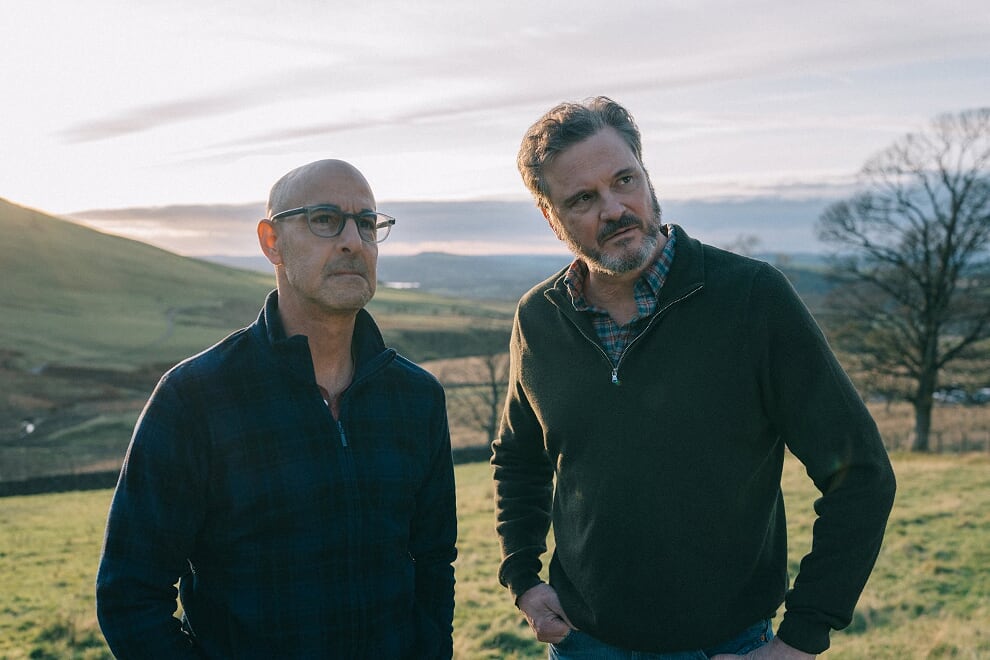 From the wilds of Ireland to the wilds of England, albeit entirely tamed, in Harry Macqueen’s Supernova, which I unfortunately found insufferably middle-class. I have a somewhat conflicted attitude toward my homeland of the UK and my privileged upbringing here, and like any reliable left-wing rich kid, I habitually repel any attempts to endear me to any “culture” associated with it. Fundamentally, it’s a culture leeched of context, the most milquetoast elements refined and polished for the least adventurous consumer, and it’s a culture built upon a legacy of desecrating and/or pilfering other cultures. I hadn’t quite the same response to Stanley Tucci’s dementia here as to co-star Colin Firth’s stuttering in The King’s Speech, but it’s a valid comparison – there’s a substantial amount of “What are you even complaining about? You, the man who has it all!”

Now, I’ll allow Supernova a little more rope than that, since indeed, dementia is a ghastly illness regardless of the social status of whom it afflicts. But it’s not so much this that turned me off Supernova – it’s everything else. It’s the plummy cast of cheery, cultured supporting players, the inoffensive technical accoutrements, the cosy wrapping up of a story whose close ought to be anything but cosy, and the contrivances required to reach that close. It’s a safe, assured film so sunk into its middle-class mould it disappears altogether. All that’s left is the mould, safe and reassuring, nice and familiar, no unnecessary chances taken, trousers steamed and pressed, bedclothes turned down and tucked in, sandwich crusts off, everything mum-approved. 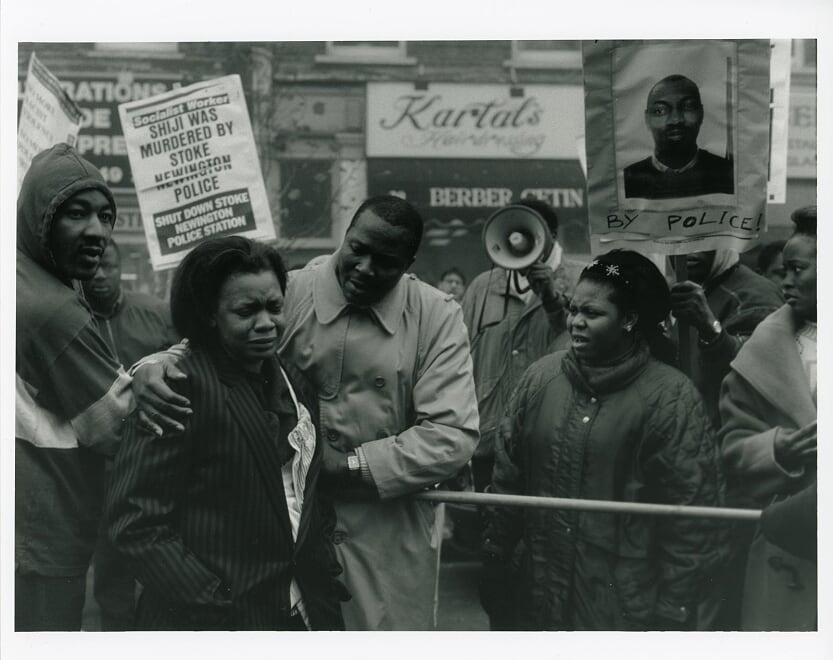 An expression of Britishness with all Supernova’s affected refinement excoriated away, Ken Fero’s Ultraviolence is a purposefully raw, direct screed against racist police brutality in the UK. It’s not an extension of the recent rise of awareness around BLM and the West’s filthy racial history, though its thematic territory is entirely in line with that explored by the 2020 protests; Fero’s been on this case for decades, and Ultraviolence’s material looks back primarily to the 2000s. “Memory is fragile and it needs to be spoken to be kept alive.” There’s a sense of anguished compulsion within every moment of this terse, unforgiving documentary, a feeling that Fero is unearthing this material now as a vital booster, educating and/or reminding those who remain of those they’ve lost.

Ultraviolence is one of those sharp shocks of a film that puts all other films to shame; in this case, deliberately. Fero interrogates the cinematic theories of masters like Pier Paolo Pasolini and Patricio Guzmán, challenging their artistic philosophies, querying whether or not cinema can even participate in the practice of achieving social justice. To take on filmmakers who themselves have protested so powerfully against social and political injustice in a film aiming to participate in at least the spirit of social justice is a bold and provocative choice – it’s the most startling and most impressive thing I’ve seen at LFF so far this year. And Fero backs himself up: Ultraviolence posits that the philosophical and the artistic effectively erode responsibility, dull emotions, and essentially proffer coping mechanisms to numb the pain. It’s pointedly aware of the fierce power of that pain, and meets it with a stinging call to face reality and deal with the very active, maybe even burgeoning legacy of the West’s racist structures and institutions of authority. 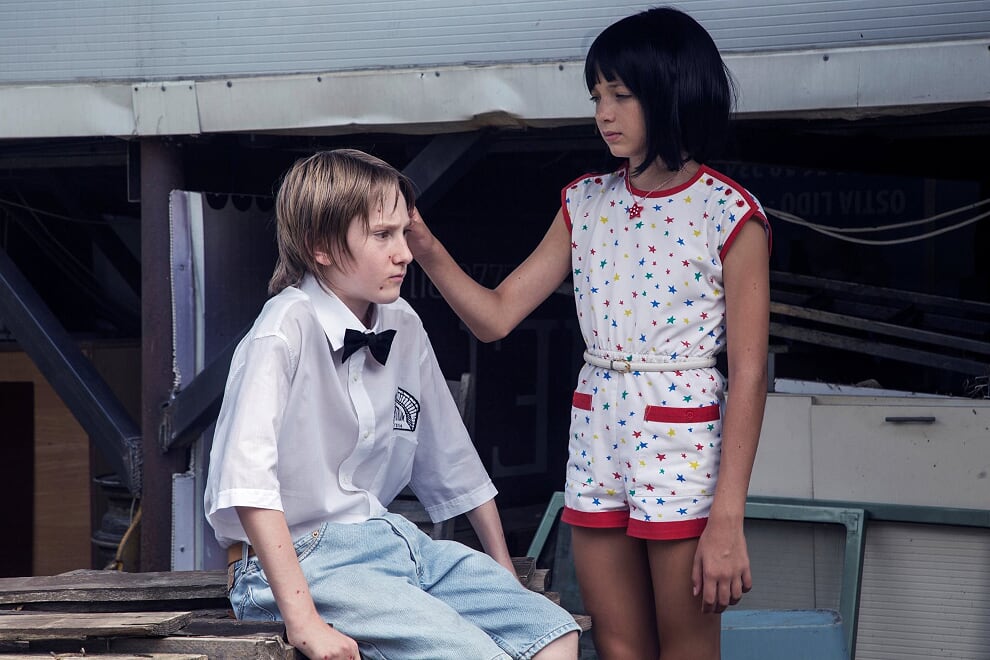 Meanwhile, the d’Innocenzo brothers’ Bad Tales peers in on an alternative violence, an imagined violence. It’s a slippery black comedy set among a few troubled households in a scorching hot Italian town. The heat seems to seep the rationale out of the town’s inhabitants, their desperate acts born out of various malign influences. Everyone’s sleepwalking toward a different act of derangement; the d’Innocenzos argument is that the winners are either those who get there first or those who get out unscathed. They do so through sheer luck.

Bad Tales is like a feverish, sunburnt Michael Haneke movie, viewed not from a clinical remove but through a hazy screen or a dirty window. It toys with perversion but never relents to it. It gestures toward fantasy but reverts back to realism, like an utterly de-idealized Fellini movie. It seeks shape and sense in the senseless, and comes off worse for the misplaced effort. It’s not an outright bad movie, though it has outright bad moments; it has some fabulous moments too. It’s just not quite the movie it’s determined to convince its audience that it should be. The d’Innocenzos have some good ideas as writers and a generally strong, steady hand as directors. They can do better than this.

It Should Have Been an Email: 2021 Golden Globes

Globes Redux: The Short Run, The Hot Take and the Long Game