by Joey Moser
in Interviews, LGBT
2

I haven’t been able to stop thinking about Cicada since I saw it at Outfest earlier this year, and I’m thrilled to see it have a robust festival run despite the state of the world.

Co-directors Matt Fifer and Kieran Mulcare have delivered a tender story about the love connection between two queer men living in New York City as they grapple with their individual pasts. Fifer, who also wrote the screenplay, stars as Ben, a lost soul who feeds himself with alcohol and casual sex. He begins a relationship with Sheldon D. Brown’s Sam and they push and pull one another towards a more self-loving place. Set to the backdrop of the Sandusky scandal unfolding, Cicada nimbly balances the lightness of a romance with the fraught emotional journey of an intimate drama.

Since Fifer and Mulcare dealt with this subject in their personal lives, Cicada breathes with a beautiful and heartbreaking authenticity. Instead of huge emotional breakdowns or monologues, the film is executed with such realism that we might think it’s a documentary. Being open about a personal traumatic experience seems impossible to capture in a genuine way, but you can feel Cicada‘s beating heart. Its honesty is its greatest asset and Fifer and Mulcare have directed a triumph of a film.

(Be warned that this interview contains spoilers)

Awards Daily: Was it cathartic to make this movie? It’s been playing all the major LGBTQ film festivals this season, so I was wondering what it was like to have it out there and receive a response?

Kieran Mulcare: Matt asked me to do this because he knew about my own sexual abuse as a child but I had never directed anything. I was curious about directing since I had only acted up until this point. I loved the script so much because it explored that. I had the safety because it wasn’t my story, you know?

KM: Feeling it and having it out there, I have a distance from it and I can talk about it in interviews. I believe it influenced how I directed the piece. It being so much based on Matt’s story with differences. His experience is different than mine.

Matt Fifer: Good question. Fearless…I think it was also the numbing aspect of sex because it was so rote at that point. Also the duration of time isn’t clear. Is it happening over a week or a month or a year? For me, I was more dead inside. It wasn’t a brave thing. I am just floating along and I just need someone to hold me.

AD: I love how restrained the movie is. I am a sucker for restraint. Cicada is very gentle and patient. We don’t hear anything about the Sandusky trails from the characters until very late in the film, and we mostly hear about it over the radio or through the TV. How did you want that to creep into the story?

KM: One of the things I love about Matt’s genius is that he’s witty and restrained. I’m a sucker for both of those as well. Tastefully restrained. That’s his script. I don’t know if you can remember consciously when to introduce that, Matt, but you certainly did in the writing and the editing that you wanted it to be layered. When he says, “I was young” and he’s caught giving the plot to The Virgin Suicides and the conversation takes that turn. It’s such an important, beautiful moment of revelation for the audience to understand, and for Sam as well. Sam has his withholding until he has the story about why he has the ostomy bag. That is something is so evident immediately, but what’s not evident is the pain of Ben’s story.

MF: Kieran is very restrained as well–except when he’s talking about me. He gets very effusive and sweet and he needs to stop. 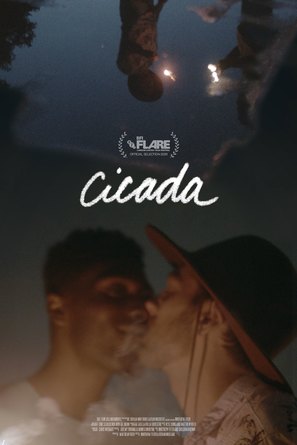 MF: In terms of the comedy, so many films that reify trauma lean too heavily on tragedy or melodrama. You don’t need to bring sand to the beach. We’ve seen Prince of Tides and many stories that bring a heavy score–Kieran and I wanted to keep it to the cicadas and some easy piano notes. I needed to have that comedy because it was the only thing that got me through the 13 years without telling anybody. Even Sheldon [D. Brown], who was shot 3 months before we started shooting, was cracking jokes in the hospital when I called him. The nurses were laughing in the background. Humor was always very important.

AD: And releases that tension. Those early scenes with Cobie surprised me with how funny they were written and performed. I wanted to talk about the ending because one of my favorite things about Cicada is that we don’t see the full conversations between Sam and his father and Ben and his mother when they reveal their secrets. Was that always the case?

MF: In the script, it always ended where it ended. When we actually had Michael Potts on set and we had an extra 30 minutes, we decided to actually shoot something. We had an improv scene with Sheldon and Michael which was nice and they really went at it. It was more impactful to leave it and have that dichotomy between the two lead characters. If you’re watching this movie and you’ve been through something like that, we wanted the film to open up your imagination or project your own experience onto it.

KM: After that point, which we all suspect what is coming, that’s something else. That’s another film entirely.

AD: Every time I’ve seen it, I’m always on the edge of my seat as to whether the words are going to come out of Ben’s mouth. There’s a parallel between how close the camera is to Ben’s face during the beginning of him telling his mother to how close the camera was to Sam’s face when he told Ben. I’m not sure if that’s a question?

AD: What do you think Ben thinks about the idea of therapy? Does he think he’s going to get something out of it when he starts?

MF: Ben doesn’t know in the moment, but when he’s writing this script he does. He realizes that it has helped and that just telling anybody was imperative and cathartic to move forward. Kieran, what do you think?

KM: It’s interesting. I don’t know if it’s a personal thing, but go to therapy. Because of some of the sexual abuse happened outside of my family, I was immediately in therapy. I was taught to meditate. That’s what you do. I never thought twice about him being in therapy. I think having Sam to talk to about it is why he goes. Hearing it from him really changed him.

MF: Yeah. And in the moment, when I finally told somebody who was very much like Cobie in her own way but not drunk, the tone of my life had changed. It seemed more real and less real at the same time. That was another thing we were trying to do with the comedic elements where you’re watching this trauma and then we pull you into a scene with Freckle or a different scene with Bowen Yang. As I was about to feel this catharsis and feel like I could cry, it was taken from me and I was living in this quasi-reality where I was living between laughter and crying.

AD: This movie really made me really miss New York and a lot of the film festivals this season have labeled it as a ‘distinctive’ New York story. Does that come with the territory or were you looking to push that element?

KM: I have been thinking a lot about environment lately. I watched Rashomon for the first time a few weeks ago and then I read the short story that its based on. It’s a masterpiece but really problematic when it comes to rape survival and recounting it. What’s fascinating is that it’s based on two stories, “Rashomon” and “In a Grove,” and the reason why the second story is called that is that’s where everyone agreed that the story took place. Place has an unarguable quality to it, and since it was a place that Matt spent a lot of time coming to terms with what happened to him in his life that was important. And also, we live here (laughs). We weren’t going further than Long Island.

MF: So many films in the queer canon and the New York canon are very white. Woody Allen’s films are always white people. Most of the queer films that I’m thinking of off the top of my head have two white actors and most of the time they are played by straight guys. I thought it was really cool to do a romantic movie with another openly gay man who could also tell his distinct story from his point of view in New York. New York has seen everything but for some reason we haven’t seen many interracial queer love stories.

AD: Some of the descriptions highlight that line that Ben “is back on the dick.” We have a lot of gay stories but not a lot of stories with bisexual or pansexual characters. Was that something you intentionally wanted to put in to make a point?

MF: You see a lot of bi characters in television but they are mostly women. I don’t know why we don’t see a lot of bi men. There is erasure from both the queer community and the straight community. There is a quote that says, “Homosexuality was invented by straight people to deal with their own bisexuality.” When I was writing this, I was trying to just write the experiences that I had been through. I wouldn’t put myself in a box, but a lot of people are talking now that bi doesn’t include everybody since it’s binary. There are obviously a lot of people in between. It was important, especially on the synopsis that it was a bisexual man.

Cicada is available to stream through Newfest’s through the end of the festival.