photograph by Agatha A. Nitecka/RÅN studio

The period romance Ammonite, starring Kate Winslet as 19th century paleontologist Mary Anning, features a gorgeous minimalist score from composing duo Dustin O’Halloran and Volker Bertelmann. Their first collaboration, 2016’s Lion, brought the acclaimed pair multiple nominations for original score, including a Golden Globe and Oscar nomination. Their Ammonite score could return them to awards attention as we head into the 2021 awards season.

For Ammonite, O’Halloran and Bertelmann relished working with director Francis Lee who O’Halloran calls “a director a bit out of time” given his penchant for creating wonderfully timeless films. In fact, this was Lee’s first experience working with composers for one of this films. Their score provides quiet and haunting support during the film’s multiple intimate moments. Through a delicate combination of piano and strings, they convey both senses of repression and Anning’s eventual sexual intimacy with friend Charlotte Murchison (Saoirse Ronan). 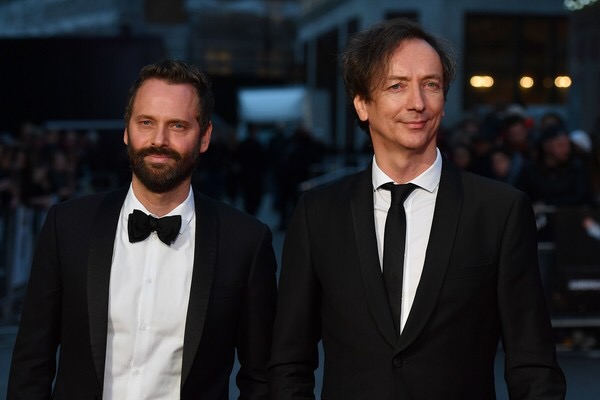 Here, Dustin O’Halloran and Volker Bertelmann speak with Awards Daily about working with Lee to create the right moments for the score. They talk about their instrumentation choices and how they convey intimacy through their sonic choices.

Ammonite opens in theaters on Friday, November 13, and via Premium on Demand on Friday, December 4.

Awards Daily: You’ve worked together since 2016’s Lion. What is it about the collaboration that creates such a strong partnership?

Volker Bertelmann: Well, we have a long friendship. Since Lion, we found out that it’s not only the friendship that works but also, musically, we can collaborate very well. In a way, we always have the feeling that we gain something out of the process of collaborating. First of all, we share certain cues. We can discuss things, but at the same time, we also have half of the work, which is also very nice. I think it sometimes needs quite some time to handcraft a piece of music and make it work to the picture. That’s so helpful if you have a companion on your side. You can discuss things, or you can just say, ‘Can you work on that? Because I don’t know. I have no idea.’

Dustin O’Halloran: It’s funny, as we’ve done a lot of films together, it’s such a big amount of work. I don’t think people realize sometimes how much work it is. If you want to create a really great score, it’s hard to maintain that through a whole film and be working the insane hours that you have to work sometimes. We work really well together, and because we’ve been friends, I think we are able to sustain a score in a really creative way. When you’re writing 7,580 minutes of music, it’s a lot of music to write, and usually, you’re writing double the amount. So it’s nice to share the creative stamina with someone. With Volker, we find that we both are so open to each other’s ideas that there’s never any ego when we’re writing. I really love that.

AD: You’ve worked with Francis Lee before in God’s Own Country. Without considering the narrative elements of the films, what do you expect as composers that you need to produce for a Francis Lee film?

DO’H: Well, to clarify that a little bit, in God’s Own Country, he used some music from another project. Because it was the only music in his film, they credited as score. This project was the first time he’d ever worked with composers. We had been in touch before, but this was the first time we had actually worked together in this way. From his previous work, I really loved how minimally he uses music. I think that’s actually a really rare quality in this time. I like that he gives a lot of space to music and only wants to use it when it’s necessary. For me, that was just a really nice change, and you just feel like you could write an important piece of music rather than fill in that hole with music.

AD: So Volker, as Dustin just said, there are minimalist aspects to the film. How do you negotiate between supporting the narrative with a beautiful score or leaving a scene silent?

VB: Besides the intuition that you have for yourself, there’s always a kind of discussion with the director. When we do a spotting session, we talk about scenes that maybe the director would like to have music in. We have some areas where we feel music can have a nice place. I have to say, in a lot of films, the positioning of the music is not always the same, but it has always the position, you can smell the position of a piece of music, because sometimes it’s a transition. For example, flashbacks are a lot of times great areas where music is happening or when the film is traveling from one place to another. It sometimes needs a little bit of a push to give the film a little bit of movement into another world or into another atmosphere. In a film like Ammonite, it’s pretty clear where music fits, and I think Francis was even more minimal than we were. He had very, very precise positions where he wanted to have music, and I think it’s doing the film a favor.

DO’H: I think he’s a director a bit out of time, which I love. It seems that he’s following his own compass, and he’s making a kind of timeless bit of work. Like Volker said, it was pretty clear where he wanted things to lie, and what becomes, in a way, part of the score is that he really used the ambient sounds of nature and it was sort of hyper realized. When we finally got to see the final mixed film, I realized what a beautiful part of the film that is and how refreshing it is to hear the sound of the waves in this very tactile way. I think how he uses those sounds was very, very refreshing.

AD: What kinds of instrumentation did you use? Were you focused on using period instruments?

VB: No, not at all. We had variations of piano, piano textures, or different piano sounds. So we used felt piano where we dent the strings, so that you hear a lot of texture on each key that is played. We used a grand piano, and then we had some strings played solo and as a quartet. Sometimes it’s very good to record in a very private space rather than in a big studio because it feels much more intimate. You can actually get the quietness of the strings and the scratching of the bows. You get all of that in much more detail. I think that fits the sound of the nature and the wind and the waves very well. So, the score is mainly strings and piano, and there is nothing else.

DO’H: Well, the first idea that Francis wanted is he had the idea of taking a single piece of music and sort of evolving it through the score. We ended up diverging a little bit from that idea, but there’s a little bit of that as these pieces come together in the end. The small pieces show themselves in these intimate ways. It’s a very restrained film, and I think that his idea was to sort of mirror that in the score. The moments of passion are not scored, which I thought was very intelligent to do. It didn’t overdramatize it and actually made it more meaningful. What Volker and I were scoring more was the loneliness and the sense of desire to connect. In the end, that’s what the story is about, and I think we scored those moments, mostly.

VB: The two women are facing, in human existence, the longing for a meaningful life and for a direction that feels fulfilling. There were times where that was completely suppressed. We still have times where a lot of these moments are suppressed by politics or by society. In a way, that’s something where the music expresses that longing for fulfillment and for a sensible life. That makes the these moments extremely warm and fulfilling. We are very lucky that the actors were so good, but we had these kind of little moments in between where we could actually create that kind of music. Otherwise, you always have to put so much more in.

DO’H: I like that he didn’t want to overdramatize anything. He didn’t want to push things so far. The film was restrained, and we were restrained in the music as well. It just allows so much more space for people to watch it and to be more attached to the characters as well as the love. It gives a lot of space. I really appreciated that.

The Ammonite soundtrack will be released Friday, November 13, via Milan Records.

A Dance Troupe Strips Down to Challenge Masculinity in 'Bare'