The State of the Race: The Gothams and Their Influence

The Gothams were announced this morning with some surprises. I have a feeling the reactions to it are going to fall three different ways: excitement by many about five films by women being nominated, resentment about it by some, or ambivalence towards the matter altogether by others. Naturally, those who really love all five of these films will be happy. Of the five, Nomadland is the one that will likely have sustaining power through the awards race. But remember, the Oscars are in April. We have to go through the entire critics phase first.

There will be some grumblings about critics “virtue signaling” with their picks in order to get those juicy RTs or to earn extra cred for thinking outside a system seen by some to be exclusionary for too long. This attitude exists in the world of Film Twitter and there is no point in pretending otherwise.  Five people on a Gothams committee decided the nominees but they will now function as powerful tastemakers as the season gets underway. Thus, I feel like I should do what I’ve been doing for twenty years – try to put the moment we’re living through into some kind of big picture context.

The era we’re navigating right now didn’t really make sense to me until I read Pendulum: How Past Generations Shape Our Past and Predict Our Future. In that book, the authors Michael R. Drew and Roy H.  Williams propose that there’s a 40-year pattern in the way society shifts from a “me” era to a “we” era and back again. It is, in some ways, a difficult book to read but the long and short of it is that we are coming down from a “we” era and moving towards a “me” era but that means we are in what the authors describe as the “witch hunt” phase. Now mind you, this book was written in 2012 – so they could not have possibly known what was coming with “cancel culture,” or the Me Too and Black Lives Matter movements. They could well have predicted the Trump era without yet putting his name on it. But this is what they wrote about what might happen as we head towards 2023:

All of this to say that if you live as long as I have so far you will have lived through at least one of these pendulum swings. The Baby Boomer generation really influenced the last “we” era of the 60s and 70s. By the time I came of age in the 1980s we were very much into a “me” era, which would gradually shift back to a “we.” The main differences are simply this:

On one side of society’s Pendulum is “Me,” marked by the idealization of individuality and freedom of expression. The values of “Me” are the values of the grasshopper, not the ant. The grasshopper is happy-golucky, living always in the moment.

On the other side of the Pendulum is “We,” marked by the idealization of authenticity and belonging to a tribe, working together for the common good. The ants are “We,” trying to do the right thing, fulfilling their obligations, cleaning up the mess the grasshopper left behind. 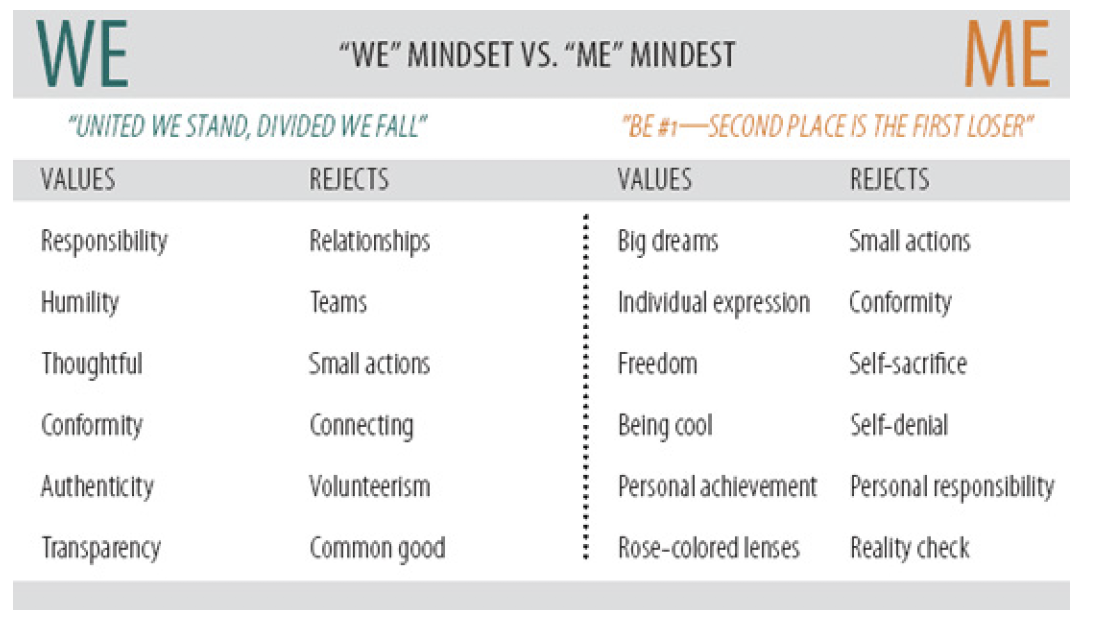 Those of you who have been reading this site for the 20 or so years I’ve been covering the Oscars will recognize this trend. It went from the “one special boy” ethos of the animated films and Hollywood movies we all valued in the beginning — the Hero’s Journey and all of that — and has now evolved towards a more equitable, inclusion-based ideology. I always wondered why I could distinctly remember how films of the 1970s were so inclusive – even Toys R Us got in on the game because the “white male patriarchy” was targeted then much like it is now. Eventually films began to focus on the anti-hero of the 1970s and towards the straight-up heroes of the 1980s and 1990s. But then it began to shift ever so slightly. You will no doubt remember when the content shifted on my site with regard to inclusivity and making the awards more “fair” — and how now I seem to have shifted back to criticizing “wokeness” as often being self-serving gesture of guilty white liberals.

That’s because, per the book Pendulum, humans always take a good thing too far and eventually “We” morphs into the witch hunt phase and eventually morphs back towards “Me” and individualism. Clearly, some aspects of each generational shift remain coursing through society, which is no doubt how society evolves slowly but surely.

I bring all this up because as you can see today’s Gotham nominations are very much in the “woke” tradition, as all five feature film nominees are directed by women and women of color. To many that means the cause worth fighting for has finally achieved its success. They have changed the world. There will be some who criticize this, of course, and call it “virtue signaling,” but I think that’s only part of the story. It’s also that, to many living today, especially millennials and Gen Z people, it resonates more with them if a film is directed by a marginalized person than by a white male. That is how many of them have come to regard what they choose to watch or at least what they choose to identify themselves with. Thus, when you think about what is the “best” you have to factor that in.

So, are the five features nominated for the Gotham awards the best of the year? Well that would depend on whom you ask.  All five are certainly well regarded, well reviewed and highly buzzed. Rather than debate their worth, we should talk instead about how this may impact the Oscar race.

The reason I blabbered on and on about the pendulum is because this isn’t just a Gotham thing. It’s a culture wide, industry wide thing that is probably coming closer to collapsing than it will be flourishing so I would say enjoy it while it lasts. The idea being that it’s better for the film community overall if the focus is not so exclusively on male directors. The five films by women here seems to suggest that one way or the other a film directed by a woman will surely make it through to the Oscars.

But we already know Nomadland is a strong contender for the big prize, if not the frontrunner. I personally consider it the frontrunner, as do the folks at Gold Derby, but April is a long way away. We’re not going to be heading into the “Me” era for a while so there is pretty good reason to assume, at least for the next little while, our tastes will not revolve around a singular male hero but rather about sharing success with the collective. I hope this makes sense.

Minari, Spree, and Promising Young Woman are three films that fit the Gothams’ indie criteria that have stood out for me this year. I know that Spree is a movie for the “Me” era that definitely does not fit the “We” era because it satirizes it. Remember, on the flip side of fostering equality is social media virtue signaling — how we tell the world how “good” we are by what we post or stream, as Spree smartly points out. But of course, in a “We” era it simply can’t gain that kind of traction. Ten years from now maybe.

Minari is a glorious thing all around. I have no doubt that it will continue to do well in the awards race, even without the urgency to nominate and award women directors (though we should expect this year we might see two women nominated in the Best Director category – we know Chloe Zhao will be one of those but we don’t know the other yet).

It’s seems a little strange that there wasn’t more love for Ma Rainey’s Black Bottom, save for the sole nomination of Chadwick Boseman. What does that tell us? I was surprised and kind of happy to see a Breakthrough Director and screenplay nomination for The Vast of Night, which was a movie I thought no one saw but one I thought was good.

What the Gothams illustrate, I think, is a singular push for women filmmakers, which is a strong statement made that will influence the first part of the race greatly, I figure.

Let’s bear in mind that these nominees are chosen by a very small group of people who should be considered “tastemakers,” which isn’t a bad thing. The AFI Awards work the same way. It is what it is.

My immediate takeaway is that it confirms what I suspected about Nomadland being a strong player this year. The Gothams feature award winner and occasionally nominees, usually go on to be nominated for Best Picture:

But the bottom line here is that we’re just happy to be talking about movie awards again. Bring it on! I never thought I’d be so happy to get the Gotham nominations. So much so I have no interest in complaining about them. I’m only making an observation. Vive la difference. I’ve been doing this so long — and suddenly I feel grateful for the knowledge that I have about film awards history, lucky for the readers I have (thank you), and happy to have a job at all. Let’s hold on tight to each other.

Max Winkler On the Brotherly Love of 'Jungleland'

Diane Warren, Laura Pausini Deserve To Be “Seen” and Recognized For Their Beautiful “Io Si”

Watch: Scott Wheeler Discusses the Makeup and Prosthetic Work Behind ‘One Night in Miami’

Leslie Odom Jr. On Creating Art Alongside the Impact of Sam Cooke’s for ‘One Night in Miami…’