< Reframe: Paris, Texas - Awardsdaily - The Oscars, the Films and everything in between.
No Result
View All Result

by David Phillips
in Reframe
2

For more than two hours of Paris, Texas’ two hour and twenty-five minutes of running time, you will likely have no idea where this film is going. It’s an epic-length film (it’s basically two road movies in one) about big things in what appear to be small lives.

Harry Dean Stanton plays Travis, a clearly broken (even catatonic) man who walks out of the Mexican desert into a Texas wasteland. A doctor treats him after he passes out and finds a business card on him and calls the number. Travis’ brother, Walt (played by the terrific Dean Stockwell) answers. In short order, Walt hits the road to pick up his brother who disappeared four years ago.

Thus begins the slow unraveling of what happened to Travis. And when I say “slow,” I mean it. German director Wim Wenders is in no hurry to explain what caused Travis to fall apart (Stanton doesn’t speak for the first half hour, and speaks only haltingly for most of the remainder of the film). Every second of this beautifully shot film (by cinematographer Robby Muller) is about what lies beneath.

It’s a difficult thing to make your lead character a man who struggles to communicate and has no great desire to explain himself. Something horrible happened to Travis, and, for whatever reason, after wandering in the dust of Mexico for a near-biblical length of time, he has decided to re-enter the world.

We learn details about Travis in tiny increments. He married a beautiful young woman, they had a son named Hunter, and then it went wrong. Terribly wrong. Walt and his wife Anne (French actress Aurore Clement) have taken in Hunter and have become Hunter’s de facto parents.

At this point, I have to comment on the performance of Hunter Carson as the 7-year-old boy who has been abandoned by both of his biological parents. He is a revelation. So often, child actors can come off as over-coached and mannered. That is not the case with Carson, who delivers one of the most unaffected and moving performances I’ve ever seen by a child on film. I assume Wenders’ naturalistic shooting style was a big assist in that regard, but the kid delivers something truly special here, and the credit for that must fall predominantly to him.

Once Walt brings Travis home, the film then becomes – ever so gingerly – about the father and son’s reunion and reconnection. At first the boy is understandably reluctant. He already has a dad, and Travis is a stranger who he hasn’t seen since he was three. His only memories of his father and mother are from a Super-8 film of Travis and his mother on vacation that Walt has shown him.

But Travis is patient, and one day he shows up comically overdressed to walk Hunter home from school. It’s the most delightful scene in the film. They walk “together” across the street from each other. They playfully mimic each other’s steps, and then Hunter eventually crosses the street. It sounds so small, and I suppose it is, but when Hunter makes that walk toward his father, it feels like everything.

But what of the mother? What happened to her? Travis learns from Anne that, on the fifth of each month, Jane makes a deposit to an account in her son’s name at a bank in Houston. Travis speaks to Walt and asks for money and a credit card to go find her. Walt obliges. And then in a moment that may test a modern audience, Hunter and Travis decide to go find Jane together without telling Walt and Anne until they are already on the road. 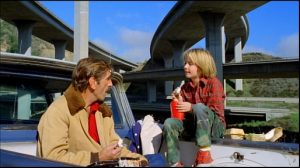 Is it a good decision for a man who is just regaining stability to quasi-kidnap his own son and go on a road trip to find his missing spouse? Not on the face of it. But Paris, Texas is not a movie that judges its characters, and as irresponsible as Travis’ choice may be, within the lives of these people, it makes sense. It’s even believable that Walt and Anne don’t call the police to track Travis and Hunter down. Maybe it’s because they believe Travis is a good man at heart, or, maybe they believe this journey was always inevitable.

Upon arriving in Houston, the father-son duo stake out both exits of the bank using Hunter’s walkie-talkies (“I told you these weren’t toys,” Hunter crows). Sure enough, Jane shows up in a small red Chevy to make her monthly deposit. Travis and Hunter rush to follow her and manage to trail her to her work—a peep show booth in a less than desirable part of town.

Travis goes in alone. He sees Jane from afar, heads down to the booth, places a call from the phone behind the curtain, and “orders” the young blonde girl. Eventually, Jane (a luminous and never-better Nastassja Kinski) arrives, and thanks to a two-way mirror and a distorted voice line, Jane does not know it’s Travis on the other side. Travis tries to engage with her, but his anger and hurt get the best of him, and he leaves quickly.

A day or so later, he steels himself and goes back. What follows is one of the greatest and most emotional scenes I have ever witnessed in cinema.

I wrote about it a little over two years ago in a tribute to Robbie Muller:

You could argue there is no beauty in the frame outside of Kinski and the words screenwriter Sam Shepard has written for them. The two-way window that separates them places Stanton on one side in a dark room where you have no trouble imagining the scent and sight of fluids that have been poorly cleaned. On Kinski’s side, you have hideous 70s decor that looks like it came from a homely kitchen. The lamp aims for mood, but it only illuminates a space that could not possibly be more depressing.

And yet, it is somehow breathtaking to look at, even as Kinski looks at the mirror framed by exposed insulation. It is all so raw and immediate.

As the scene plays out, and these two broken souls reconnect, the pain of their words and insinuations works its way into the very fabric of their environment. As awful as it is, there is no other place on earth this conversation could have taken place.

Muller makes the wonderful choice to shoot Stanton in shadow and often from the back. Whereas Kinski is well-lit and head-on. The genius of this choice allows us to feel how exposed Kinski is, not only in this moment with Stanton, but in her occupation as a whole. Were it not for the sensitivity of the film’s elements (acting, screenplay, and photography), the scene could be creepy, if not downright disgusting.

But through Muller’s lens, through this stark, unvarnished vision where even the scar under Kinski’s left eye is given no cover, the moment becomes transcendent. All the trappings of an unsavory place slide away, leaving you with nothing but a focus on two open hearts in desperate need of healing.

It is a truly magnificent scene that plays like a thriller. Perhaps lives are not in imminent danger, but the rest of these people’s lives depends on what they do next.

The scene that follows—the last scene of the movie—offers us another reunion. As dialogue driven as the sequence between Travis and Jane is, the film’s final moments are told in almost complete silence: A young boy sees his mother, he steps to her slowly, he touches her hair (which looks just like his) and they embrace. A man looks on from afar, knowing that while he cannot fix everything, what he could fix, he did.

As he drives away from the mother and son into the dark Texas night, the camera lingers on the driver’s face, and Stanton allows Travis a smile.

What he could fix, he did.