by David Phillips
in News, Obits
4

When you’re the in-house obit writer, every now and then you run into a challenging tribute assignment. As well-versed as I like to think myself to be on the history of cinema, there are some performer gaps that I have that can make the task at hand more complicated. Which brings me to Ann Reinking. It’s not that I don’t know who Ann Reinking is or what a significant contribution she has made to the arts. The trouble is, I’m not a Broadway guy and I don’t really like musicals (I know, I know). Not to mention, when it comes to film and TV (and we are a film and TV site), Reinking has all of eight credits…eight. And one of those is an episode of the Cosby Show. So, on the onscreen side, her resume is slight.

But here’s the thing, among those eight listed projects are two films I absolutely love: All That Jazz and (believe it or not) Micki and Maude. Before I get to those two films though, I think it’s important to do a little historical housekeeping.

Reinking was a member of a number of Broadway ensembles from 1969 to 1972, including Bob Fosse’s Cabaret and Pippin. During the latter, Reinking and Fosse became a romantic item while Fosse was still married to (but separated from) Gwen Verdon. In 1977 Reinking replaced Verdon onstage as Roxie Hart in Fosse’s Chicago. Just one year later, she won a Tony for best choreography for Dancin.’ She also appeared in her first movie role that same year in Stanley Donen’s Movie Movie. People more attuned to her stage life will write far more erudite summations of her storied Broadway career, and I will leave that to them. What I will do next is talk about All That Jazz.

As I mentioned before, I’m not a fan of musicals (again, I know, I know). But let me just say, All that Jazz is a notable exception. Based loosely on Fosse’s own high-flying and hard-living career, Jazz gave Roy Scheider the best role of his life as Fosse’s avatar, Joe Gideon. In the role of Gideon’s girlfriend, the wonderfully (if improbably) named Katie Jagger, Ann Reinking stole every scene she was in. Hell, she all but swiped the whole movie from Fosse and Scheider. Her extraordinary physicality in the part was matched by her incredibly expressive face. And at the risk of sounding like a little too much of a man, her legs were the most perfect form of bodily architecture I have ever seen. As Katie, she was magnetic during her every second onscreen. When she wasn’t onscreen, you could be forgiven for looking at the edges of the frame, anxiously awaiting her return.

I mean really, watch her do this and tell me you wouldn’t be interested in a film that just followed her around for two hours, doing nothing more than tracking her every graceful move.

She is sexy, powerful, transfixing.

Reinking only made two more movies after Jazz. John Huston’s Annie followed in 1982. I know people who love that film, and I must admit, I wonder about those people…a lot. However, her final film, 1984’s Blake Edwards-directed screwball comedy Micki & Maude is a movie I love, even if it hasn’t aged well. Dudley Moore plays Rob Sallinger,  a TV reporter married (to Reinking’s Micki), who falls in love with Amy Irving’s Maude. The horribly dated conceit is that Sallinger is happily married to Micki, but after suffering a miscarriage, she is reluctant to get pregnant again. Sallinger is so desperate to have a child he takes up with Maude. The upshot is that both women end up pregnant. Somehow, this scenario results in a happy ending. 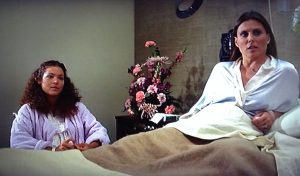 My god, just writing that synopsis sounds horrible. sexist, and all sorts of other bad things. How can I defend my affection for it? I don’t know that I can. I’m not even a fan of Edwards, Moore (who I often found grating), or Irving (at least not to any great degree). Maybe that crush I developed on Reinking in ’79 simply allowed me to paper over the film’s many sins. Because Reinking, in a film that needs her more than it deserves her, is so winning and lovely that the ridiculous man-made plot just sails past me as I buy her nonsensically written role wholesale – only because she’s playing it.

I’m not sure why Reinking never made another film. Perhaps the lure of the Broadway lights was simply too strong. She largely retired from performing in the ’90s, focusing more on choreography. She also conceived and co-directed 1999’s Fosse, which was a full-on triumph, earning Reinking a Tony nomination for her direction.

I have seldom regretted my aversion to musicals – people breaking into song, singing their dialogue, and explaining their emotions has never been my thing. But I “got” Ann Reinking. Therefore, today I do have regrets. Because as much as I may have loved Reinking on film, it was surely the stage where she bloomed in full.

And I missed it.

Ann Reinking died on Saturday. She was 71 years old.

Composer Henry Jackman on His Ambitious Score for Apple’s ‘Cherry’

Shorts: A Father Fights for Normalcy in ‘The Present’

Shorts: ‘White Eye’ Asks Who Is the Real Bicycle Thief

Shorts: Two Kids Get Taken To the Edge of Something Sinister in ‘Da Yie’

Shorts: A Wily Young Girl Witnesses an Accident in ‘Bittu

Dropping Our Final(ish) Predictions on the 2021 Golden Globe Awards

by Megan McLachlan
3
No Result
View All Result