Cash stars in Season 2 of Amazon's word of mouth smash about engineered superheroes.

Growing up, Aya Cash never in her most vivid dreams imagined that she would one day take on the role of a superhero who is also a former Nazi.

Quite the opposite, in fact. While she did absorb as much material about the Holocaust as she could, her childhood exploration of that dark period in human history was an attempt to understand it. How that tragedy could have happened. If anything at that young age, she would have guessed she would grow up to play someone hiding during the Holocaust.

But definitely not The Boys‘ Stormfront. 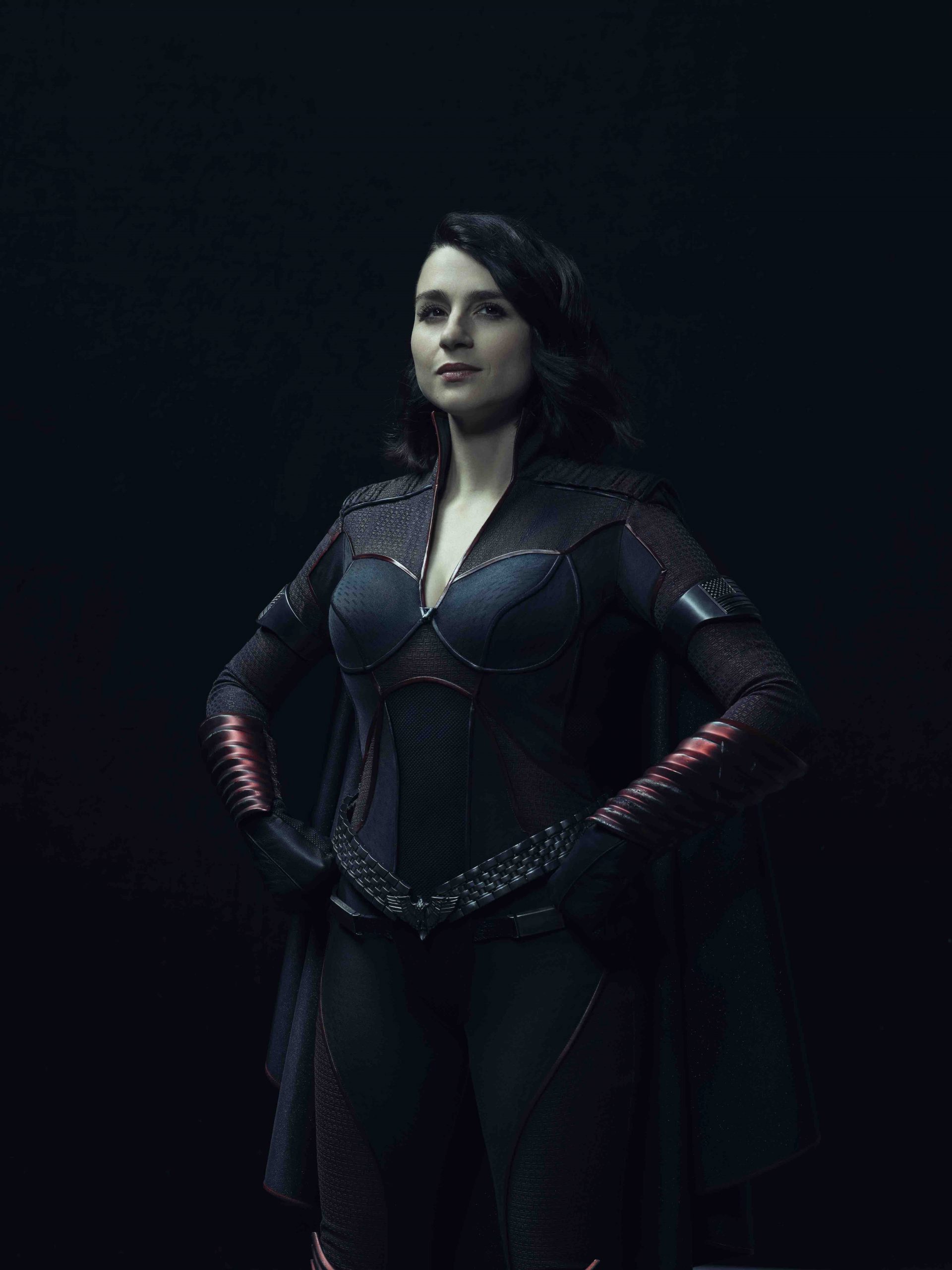 “It was an exciting challenge… and a terrifying one. It was also really interesting to have to go into someone who is filled with hate and to try to inhabit them. To walk the tightrope that is giving humanity but not empathy in the way that you would normally try to give a character. I was very careful not to give any excuse to the behavior, even if you see the humanity in her evilness.”

Cash joined Amazon Prime’s The Boys in its critically acclaimed second season as Stormfront, an extremely powerful foil to Homelander (Anthony Starr) – the leader of a group of engineered superheroes called The Seven. Over the course of the increasingly political second season, the series deliberately alludes to our modern political environment. Cash’s Stormfront, who uses social media and “telling it like it is” to build a rabid cult following, is revealed to have been the very first engineered superhero created during Nazi Germany.

The parallels to modern politicians are irresistible… and entirely intentional.

“Information comes so fast these days. It’s very hard to make your own determination of who the truth tellers in our society are. If you get on the path of someone who is lying, then they can drag you down that rabbit hole,” Cash explained. “[Stormfront] uses social media in that way. She comes across as sort of straightforward. I’m going to tell you exactly like it is. I’m not going to be like these managed bullshit celebrities. And she’s a liar.”

To infer her performance, Cash relied on public figures who use social media and build a similar communication style with their followers. That was, of course, in addition to series creator Eric Kripke’s guidance and the tightly written scripts. Initially, The Boys’ graphic novel version of Stormfront was a male antagonist, but in the translation to TV, Kripke believed changing the character’s gender would provide an irresistible opportunity.

Over the course of the series, the tumultuous relationship between Stormfront and Homelander escalates into an intensely sexual relationship. She even begins to consider themselves the perfect (re: Aryan) couple, perfectly suited to raise Homelander’s incredibly powerful son. The twisted family unit wasn’t an ironic turn for the series. Cash played Stormfront as a woman in love, no matter how ill-advised that love would be.

“I think she’s madly in love with him and wants to be the mother to his son. Partially because they are the most powerful ‘supes’ she’s ever met. Also, they represent in her mind the sort of racial purity, blond hair/blue eyes,” Cash shared. “It’s not like her reasons are good, but I do think her love is real in her warped mind. So I played it straight. I played it like a straight love story.”

Which makes Cash’s Season 2 arc all the more compelling. Particularly in the middle-season scene where Homelander and Stormfront make passionate love, destroying his apartment in the process. Filming that scene, Cash also never imagined that the series would emerge with a “fan-in-chief.”

As he released his third book A Promised Land, President Barack Obama revealed that he was a huge fan of The Boys, eventually naming it as one of his 10 favorite television shows of 2020. Cash and her The Boys cohorts are still reeling from the flattering exposure. Especially considering his approval inferred that Obama fully understood what the series was trying to say about culture, media, politics, and social media.

Albeit one with some very bizarre sex scenes.

“I did have a friend text me and say, ‘Can you imagine the Obamas sitting down and watching you f— while flying?’ Oh, god!”

Nate Parker's American Skin is One of the Year's Best