You’d never know that the movie the Daily Beast just took direct aim to shoot down was also reviewed favorably by the Daily Beast when it first premiered at Venice. At least they haven’t taken the review down, considering. Here is the opening paragraph:

And the review continues:

But the film is surprisingly not really about school shootings. It doesn’t even have an anti-gun slant, and instead opens with a scene of a teenage girl, in mourning over the loss of her mother, shooting a deer under her father’s delicate guidance.

Despite this shocking and at times very disturbing backdrop, the movie is actually about a family consumed by grief, and interracial teenage love. Mom has died of cancer and their only child, Zoe Hull (Isabel May), just can’t let her go. Dad, played by Thomas Jane, is a former special forces sharpshooter who can’t cope with an 18-year-old daughter on his own and has anger issues and a serious chip on his shoulder. Zoe has conversations with her mom who appears at various stages of her cancer throughout the film, which sometimes work well, but other times prove a distraction.

Zoe’s best friend is a Black student named Lewis Washington, played by Olly Sholotan, who’s ruined her lunch by asking her to the prom when it’s clear Zoe doesn’t want the relationship to veer that way. As the yearbook editor, Lewis ends up being chosen by the killers to livestream the whole thing on the school’s social media accounts. Once the shooting starts, Zoe and Lewis are separated, leading to predictable moments of tension and an equally predictable teenage kissing scene.

This film will easily trigger some and anger others. But overall, it ticks the boxes of a high-pulse action film that is disturbingly relevant and revealing.

You’d think, given that their own paper ran what appears to be a near rave of the film, that Marlowe Stern, the author of the hit piece, would at least mention that. But that would be too inconvenient a point to make in a story that is a signal to everyone on the left who watches movies or covers movies: do not talk about this, do not mention it, or else you are going to tarnished.

It seems that the Daily Beast was fine with the movie until The Daily Wire picked it up. Yes, The Daily Wire, which was started by that troublemaker Ben Shapiro who seems to trend every other day on Twitter over some provocative thing he said. This past week he trended for three days in a row for three different reasons. 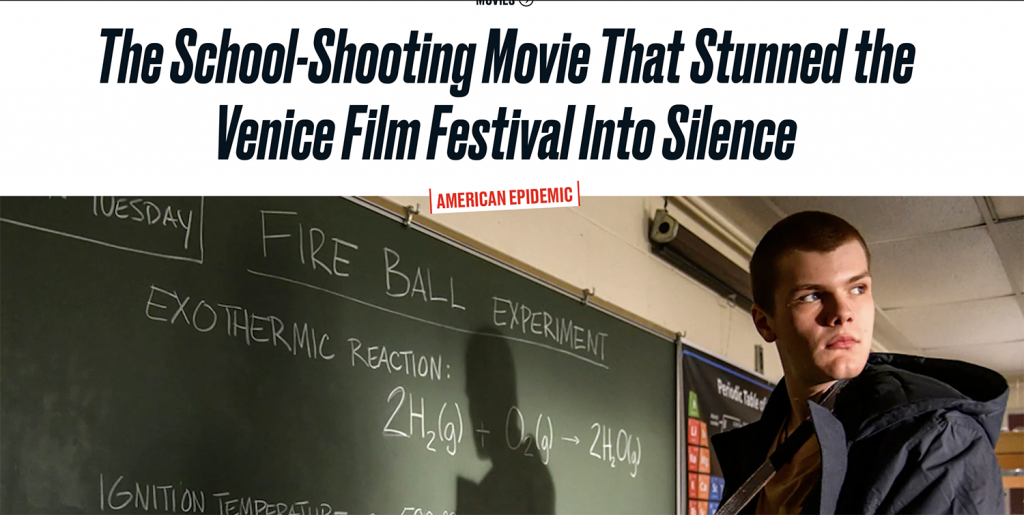 The Daily Beast’s headline now after the Daily Wire picked it up for distribution:

Honestly, given Stern’s clear and present white hot hatred for Shapiro, it’s kind of remarkable it’s such a balanced piece, with quotes from the Daily Wire and everything. But the conclusion and warning could not be more clear: do not go near this with a ten foot pole.

More importantly, I know that anyone involved in this movie that has their name on it will forever have to deal with Marlowe Stern and a powerful army that will probably never let them forget they were in it. We never seem to exhaust ourselves of shaming others, ruining lives, erasing people from existence, or just snubbing or shunning them from polite society. I do not know how we ended up here, in the extreme. Actually, I do know but I won’t bore you with that long story.

Kyle Rankin’s Run Hide Fight is definitely my kind of movie. When I was a single mom with a baby living in a guest house in Van Nuys with nothing but a modem and a computer and I started this website in 1999, I used to spend a lot of time fretting about potential dangers and imagining my way out of them. If you are a parent, or if you become a parent, you are forever in standby emergency mode. What if she falls in the pool. What if there is a fire. What if someone breaks in. What if she chokes. What if we get in a car crash. Those worries don’t really prepare you for crisis but it doesn’t matter because you will keep these movies playing in your head anyway.

One of mine was definitely what if there was a school shooter. The main character, Zoe (Isabel May) puts her survival skills to the test when her school is overtaken by a group of shooters (think: the vampires in Near Dark). It’s extremely violent in the film’s first moments but Zoe doesn’t really spend her time hunting down and killing the perps so much as she uses that time to try to save her classmates by going from room to room and making sure they escaped. I was told this movie was a pro-NRA or pro-gun movie but it really isn’t. Well, you could make that case if you wanted to — the “good guy with a gun” argument but Zoe doesn’t solve the problems she needs to solve with guns. She uses other skills at her disposal to outwit them.

I was unexpectedly moved by this movie because of the strong mother/daughter story of a daughter having to say goodbye to her mother, on top of dealing with the grief of loss. The day does not exist that I would not watch it or not talk about it because Twitter would get mad – you guys know that about me. Not really in my DNA to be that person.

The only advice I would give the Daily Wire crew in releasing this movie is to make it a pay per view kind of thing for people who want to watch it. Now, I believe you only have to sign up for the site to access it – I think more people would watch it that way. Maybe that is in the works.

Either way, you can find the link to watch it here if you have a mind. Or not. It’s up to you.

To Stern and others who cover the film, the last thing that matters seems to be the film itself. They see it as an insult that anyone would make a movie like this — as Stern describes them, “‘populist’ films for the Trump crowd.” I’m not sure at what point the left turned into people who look down their noses at so many millions of Americans but I gotta say, though I am no Trump supporter, I certainly appreciate “populist” films. I liked this one enough to recommend it.  And if a new distribution model has cropped up aimed at people that the left have long since stopped making films for and don’t even really consider when telling jokes or producing awards shows, then I think it is worth reporting on.

I’ve had a few readers write in the comments complaints that I have covered or mentioned the Daily Wire in the past — and one of them said he wasn’t angry, he just didn’t want to give me traffic or clicks as a result. I get that. I really do. I personally know a lot of people out there who are suffering in silence because so few outlets and so few people are willing to push back against the New Left Order. And I know a lot of readers are fine with that and welcome more of it. I just hope that here at AwardsDaily we can welcome all different kinds of people from different walks of life and ideologies. I’m not sure this is an achievable goal in such a fiercely divided polarized country but hey, why not try.

by Sasha Stone
61
No Result
View All Result