Hi friends, how are you all holding up in these times? Here we meet, once again, as we head towards the next phase in the Awards race: the Golden Globes.

It is a very surreal time, there is no doubt about it. Even though we ushered in Biden and Harris, and a good many people feel relieved about this, the problems that existed before on the left remain very much in place: suffocating cancel culture, self-censorship for survival’s sake, the threat of deplatforming looming across the board, and a need to continually prove yourself to a group of very judgmental, very discerning people. On the right is an entirely different set of problems that have only been amplified by post-election resentment and confusion, and widespread animosity and distrust toward anything that most of the media and Hollywood say is important.

Yeah, sounds like a lot of fun, eh? I bring this up because you should all know that this site — or at least my own writing on this site — is probably going to be poking that beast more often than not. The reason being, who can live like this? The answer: only a select few.

Thus, I am sure I will be angering a good many on this site in what I cover, whom I listen to, what I tweet – I am always on the lookout for those brave enough on either side to push back against what is happening (if you don’t know what that this then this won’t mean anything to you) and thus, it makes me unlikely allies with people many of my readers here might regard as “problematic.”

Either which way, the Oscar race this year will have no choice but to respond to these new challenges across the board – and by that I don’t mean choosing films that are inclusive and diverse. But it does mean that things critics say and how bloggers cover the race, what they’re honest about and what they’re not, will be shaped by that a dynamic that can be described as fear.

There is not much that has changed since last time we met. Except that Malcolm & Marie – a daring film that was once thought to be a strong Best Actress vehicle by people like Anne Thompson – is now getting tumbled through the dryer on Film Twitter. They’re really mad about something and it doesn’t take a genius to figure out what that is. 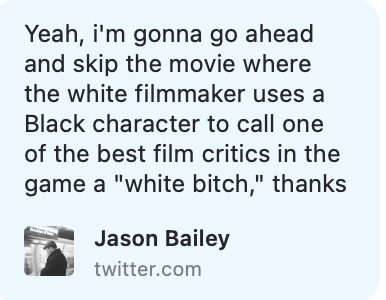 Film Twitter always has a “take” and this one seems to be “how dare this WHITE filmmaker (says the white critic) make a movie starring black actors at all, but then to go after a female film critic in the LA Times in a fit of rage about woke film criticism. Woke as in, a white woman going on and on about it, right?

It’s a multi-layered situation happening here with Malcolm & Marie, though not unforeseen. I texted a few people after seeing it and called this way before the reviews dropped. As a good friend of mine and a film director once told me, “this new set of rules and I are not going to get along very well.” That’s the thing, for some people they have no problem staying silent and slowly backing away, or even hopping aboard the train of outrage. But those of us who push back against it, and have been for a long while now, are in the path of that same outrage.

Viggo Mortensen new film Falling, which he wrote and directed, is about a married gay man trying to fix his relationship with his father. As another friend of mine said, “why not just put a bullseye on your back.” We already know that there is an unwritten rule that only black filmmakers should tell black stories, only gay filmmakers should tell gay stories – or act in them – but at the same time an ongoing complaint of white filmmakers who stay in their lane and make movies only about white people that they are lacking diversity. This has never really been settled. We just know that if a shitstorm erupts, it will catch like wildfire on Twitter and suddenly the film becomes radioactive as no one wants to align with it, or wear it as a badge of virtue. Right?

MALCOLM & MARIE is brilliant. @Zendaya and John David Washington deliver tour de force performances off the incredible screenplay and direction by Sam Levinson. I saw it last night and I’m still in awe.

Lol well of course MALCOLM & MARIE was going to divide critics. It’s about them. pic.twitter.com/mDQRedT7ON

It’s really hard to say how Oscar voters or SAG actors will respond to Malcolm & Marie? To me, the best part was the provocative rant against film critics and how our culture over all has strangled the life out of art. I think he (Sam Levinson) knew that he could not have a white character deliver that rant because the hate would be far more extreme. Here, there is at least one degree of separation between him and John David Washington so that might make some loathe to dig in the knives.

But Malcolm & Marie is also long and wonky, with just two characters talking to each other and might wear out many of the voters before they get to the end. For me, the rant he delivers is the best part of the movie — but overall I enjoyed watching these two actors for the duration.

I also agree with Steve Pond over at The Wrap who writes in his latest column that the number of films in the Best Picture slate could shrink down for the first time since they expanded (with an even 10 in 2009, 2010 and a random number between 5 and 10 from 2010 up until this year – they are going back to an even 10 in 2022).

Wonky Steve Pond is the best Steve Pond and he’s dug in real good this time. He has a method of trying to calculate how many films might be in for Best Picture this year and writes:

I’ve tallied critics’ lists using the Oscars system many times since the Academy instituted the variable wrinkle into its ranked-choice Best Picture voting in 2011 — and the years I haven’t done it myself, I’ve overseen similar Oscar-style tallies of the Critics Choice Awards ballots by that organization’s accountants. In all that time, the system has produced seven, eight, nine and even 10 nominees. It’s never produced five.

But this time, my count only produced five. After a year in which theaters were closed and rules were changed to allow streaming premieres to qualify for film awards, support was so spread out that only the absolute minimum number of films got enough votes to be nominated.

That’s not to say that the same thing will happen with Oscar voting — it’s reasonable to think that Academy members will be a bit more focused in their voting than film critics, who often pride themselves on being idiosyncratic and eclectic. But at the same time, the pandemic-era rules have caused big, obvious contenders to be pulled off the release schedule, and taken away the events where buzz would build and front runners would be christened and bolstered.

My own thoughts on this are that voters will feel exhausted by this entire year and a bit sad and resentful over how the Oscars are being handled overall. It’s just a sense I get from the few voices I’ve talked to such that I could see them filling out their ballots as minimally as possible and mainly with the same films. Thus, I could actually see this year turning out 5 or 6 or 7. We’ve only seen years with 8 or 9 and those were extremely competitive years.

This feels more like a year where five movies would be more than adequate to fill the slots. But will it go that way? Who knows.

That is why the Golden Globes and the National Board of Review, not to mention the Directors Guild, Producers Guild (where they have to put down ten) will be key in figuring out which films have all of the heat. If Steve is using the critics we know they are going to be probably much different from how the industry might vote.

We are still just making it up as we go along, but I really like Pond’s method of sussing out the bigger picture overall.

We still have all of February, all of March and almost all of April to go. Does it feel like the 9th circle of hell or are you enjoying it? Talk to me, Oscarwatchers. Don’t be shy.

Here are my predictions as it stands right now, given what we know and what we don’t know.

Longer shots:
Malcolm & Marie
The United States vs. Billie Holiday
On the Rocks
The Mauritanian
Ammonite

Sound
Sound of Metal
The United States vs. Billie Holiday
The Outpost
The Prom
The Trial of the Chicago 7