Golden Globes in the Distance

Where once the Oscars were nothing but open doors (despite how may of us insist upon closing them), now we’re rounding the corner towards the hammer coming down, if you’ll excuse the mixed metaphor. We’re just about ready to say goodbye to some darlings and hello to some unwelcome guests, but we will and must face the reality of what the Oscars are and what they aren’t.

What they are: a compromise and an agreement that these are the best of the year. What they aren’t: any good indicator of what films will stand the test of time, whether they will be remembered even a year from now, much less ten years from now, much less 40 years from now. Many of them will, but as always, they represent a snapshot of where American culture was at a given point in time. Probably in this era, one will be able to tell a good deal about who Hollywood was in 2020 by the films chosen in this year’s race.

The Globes have busted out a bit from the insular “bubble” that has mostly driven the Oscar race of late. The feedback loop is: Film Twitter drives film criticism which drives critics awards which drives the Oscar race, more or less. The Globes have broken free of this now and again, driving one contender or two that sit on the more populist side of things like Bohemian Rhapsody or like The Martian. But are there any movies this year that would fit this model?

If the Globes were to bust out of the model designated up to now by the feedback loop of Film Twitter and the Oscar race, they might go for films that live outside of it. I’m thinking specifically of Paul Greengrass and News of the World, Christopher Nolan’s Tenet, which has been likewise ignored and has no Oscar campaign to speak of. Or Warner’s Judas and the Black Messiah, which is one of the other “big studio” movies in the race that is gaining a bit of traction as we head into the final end game.

Another movie is Universal’s The Invisible Man, starring Elisabeth Moss, which is a really good movie that was also made for larger audiences. But as of March or April, theaters and the movies that were supposed to launch out of them have been mostly MIA. I gather there are actual movie theaters still open in places, but overall the Oscar launch from a major film has been absent. Pixar’s Soul is certainly another mainstream film as is Disney’s Mulan. Other movies like Greenland or Let Him Go aren’t getting anywhere near the Oscar race despite their broad appeal.

Whether either the Golden Globes and/or the Producers Guild will introduce more populist films into the mix is something we’ll find out in a few weeks. But at the moment, we have no guideposts beyond what’s come before.

The other thing that is about to happen is the BAFTA announcing their long list, which they will be doing February 4th. After being called out last year the BAFTA has gotten very serious with its own efforts to diversity, as the Academy has. Here is what they say in their rules:

BAFTA announced wide-ranging changes to its voting, membership and campaigning processes as it published the findings of its in-depth, independently verified seven-month Awards Review. The changes signal the beginning of a significant cultural shift in BAFTA and challenges the industry to address the serious lack of opportunity and equality.

The Report in full along with the list of over 120 key changes being introduced, is available here.

The Globes are announced Wednesday and the BAFTA long list, along with SAG, is releasing the following day, February 4th. They have put out their voting regulations in a fairly neat chart. If I’m reading correctly, they are separating male and female directors for their long list, and though there are so many women in the race this year it will likely be easy. It should make a more welcoming process for women going forward, I would imagine. 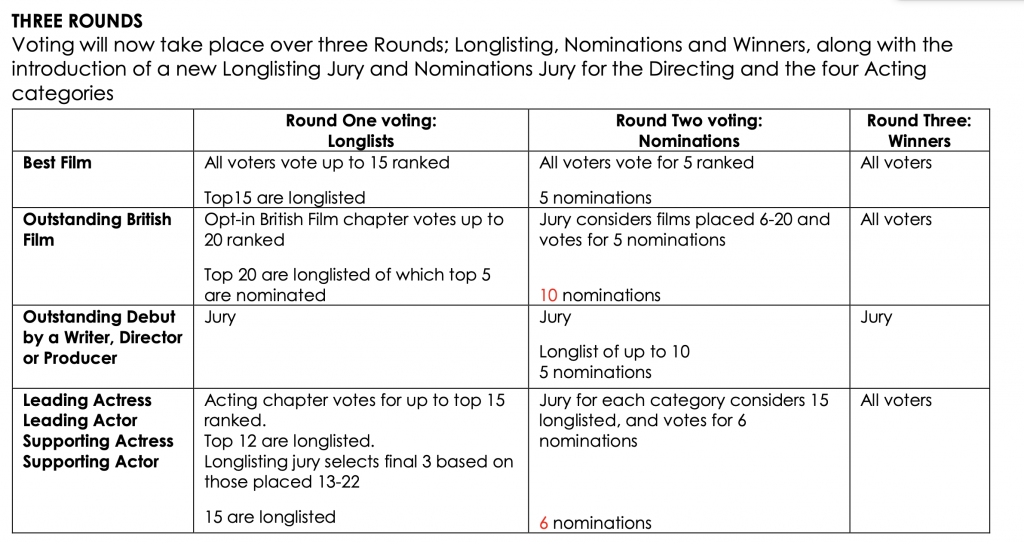 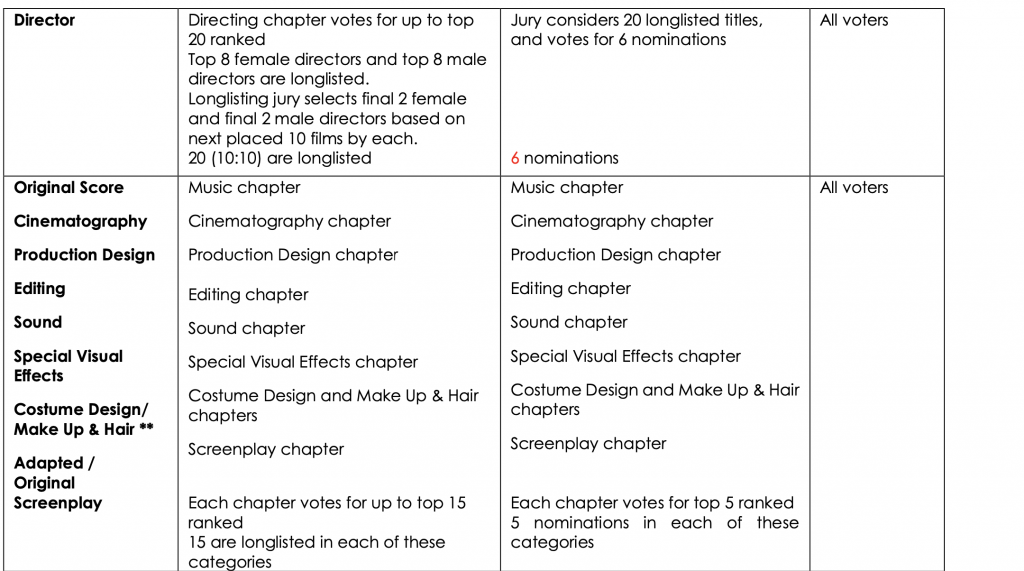 Since we already have the most diverse lineup the Oscar race has ever seen — like, ever — and a lot of that is due to both the COVID restrictions but also the film critics guiding the race in this direction. The trick will be whether this produces long-lasting change or whether eventually, as happened after the same kind of cultural wave in the 1970s and into the 80s, things slump back to the way they always have been. I guess we’ll have to wait and see on that one.

Needless to say, the SAG awards, also announcing on February 4th, will close many doors as well. It might open a few. You never know. We’ll be doing a preview of the Globes, the BAFTA and the SAG in the next days.

Here are Oscar predictions prior to the massive iceberg the awards race is about to hit.

Strong contenders:
The Father – could get a significant boost from the Globes or the BAFTA – in fact, probably the BAFTA is going to give it the leg up it needs to launch into the race.

Longer shots: Any of these films could be boosted by either Globes or BAFTA
Malcolm & Marie
The United States vs. Billie Holiday
On the Rocks
The Mauritanian
Ammonite

Next tier
On the Rocks, Sofia Coppola
Ammonite, Francis Lee

Sound
Sound of Metal
The United States vs. Billie Holiday
The Outpost
The Prom
The Trial of the Chicago 7

Here are the eligible films for Doc Feature

Here are the eligible films for Foreign Language.

Director Rachel Mason Tells a Fascinating Story About Family, History of the Gay Community Through 'Circus of Books' Doc