The State of the Oscar Race: Voters Flying Blind

by Sasha Stone
in 93rd Academy Awards, BEST PICTURE, featured, News, The State of the Race
19

Considering the awards and nominations we’ve seen so far, before we even get to PGA or DGA, we have our Best Picture winner somewhere in what has been named in the AFI, NBR, Globes, Critics Choice and SAG award nominations, since 2009 anyway, and in the era of the expanded ballot.

One of these films named so far will win Best Picture at the Oscars. And it will win at least one of the above mentioned awards (minus AFI, which does not give out a single winner anymore).

It is worth noting, as Clarence reminded me in our latest podcast, the announcements of the PGA, DGA and BAFTA will have very little influence on what gets in with the Academy. Look at the dates:

The Oscar ballots are, shockingly, only in voters’ hands for one week. Presumably they probably figure – well, enough time has gone by — like 100 years since last season — that it shouldn’t take too long to figure out which movies are your favorites.

On the other hand, from an Oscar predicting POV I think there could be rather disastrous consequences. The thing about a consensus vote is that movies gain momentum every time they are mentioned and voted for. As it is, the two main influencers for these will be:

And indeed, if you look at the below charts you will see that between these two, and the SAG — the Best Picture winner has to win one of these first, or has won one of these.

The main reason is that both will be large publicity events that showcase winners, speeches, etc. The Globe wins will give voters a chance to think about how they feel about the films winning. A great speech can go a long way. But if a win feels “wrong” somehow there will be time to “correct” that choice. I’ve seen that happen a few times over the years, some in a good way, some in a not so good way.

It looks like the Best Picture winner is either the SAG or the Critics Choice/Globes. Only one film has won all of them and that was Argo in 2012. 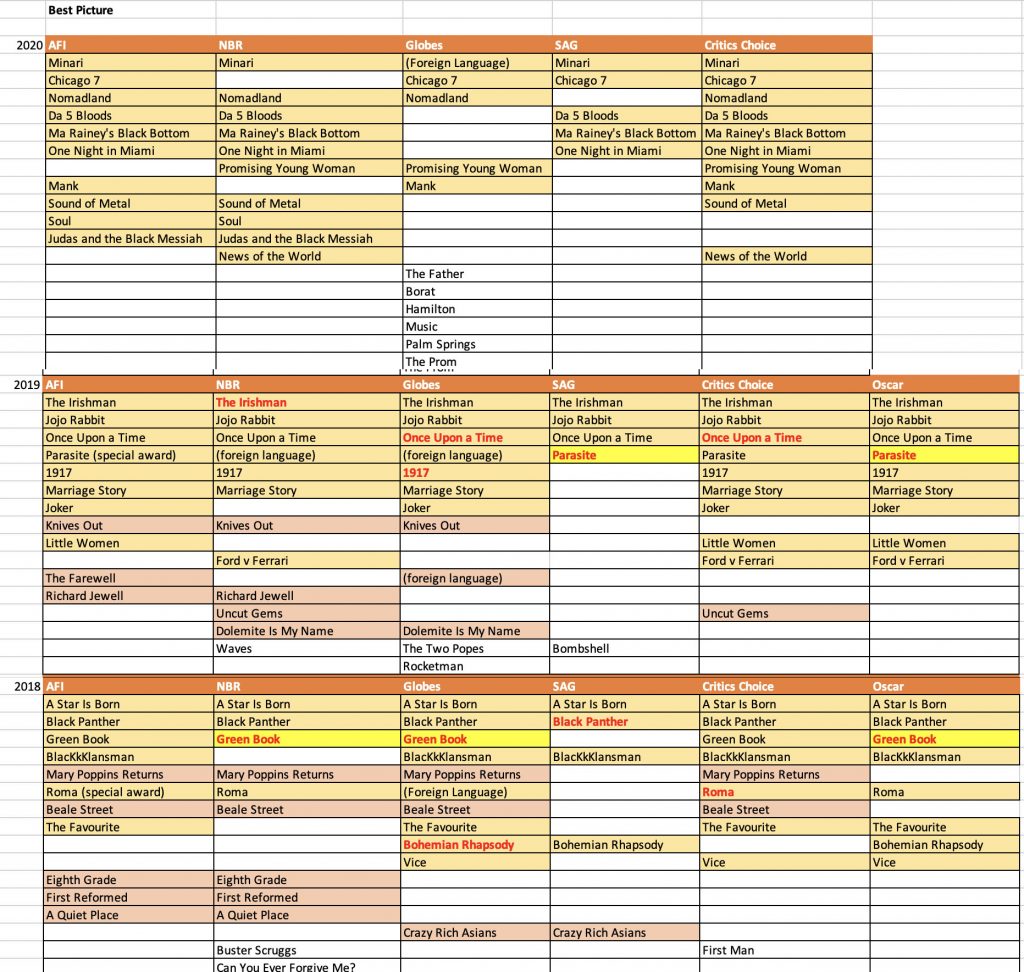 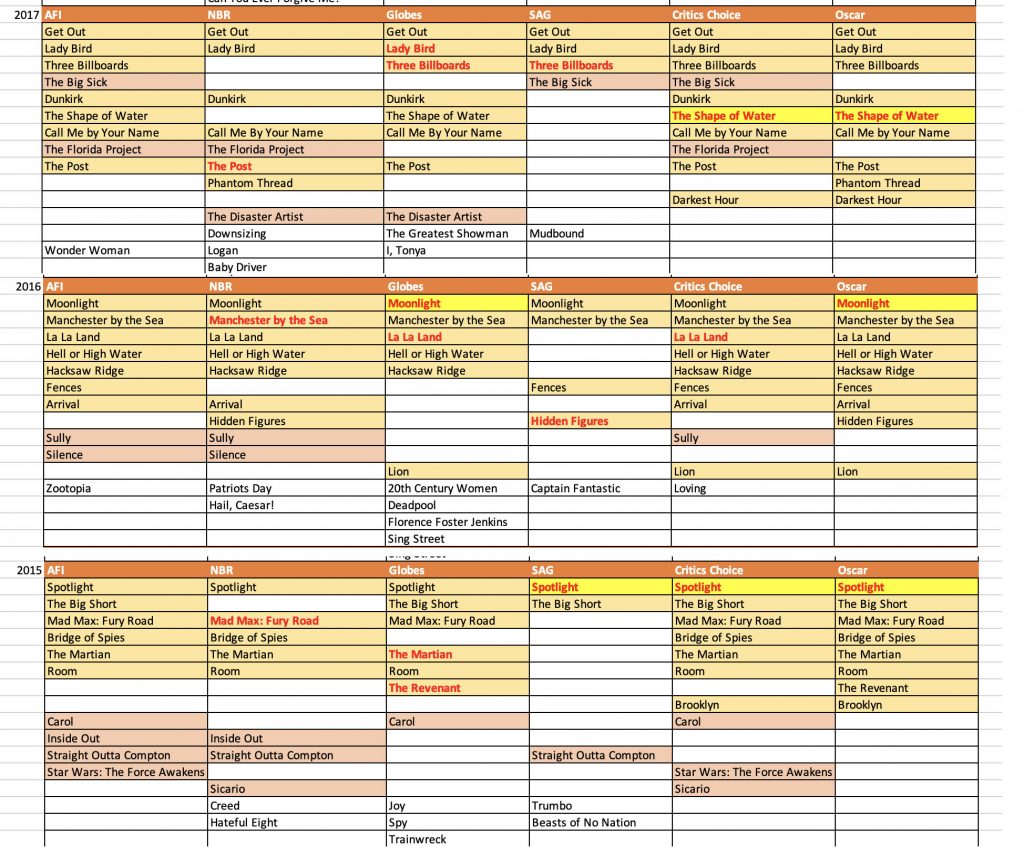 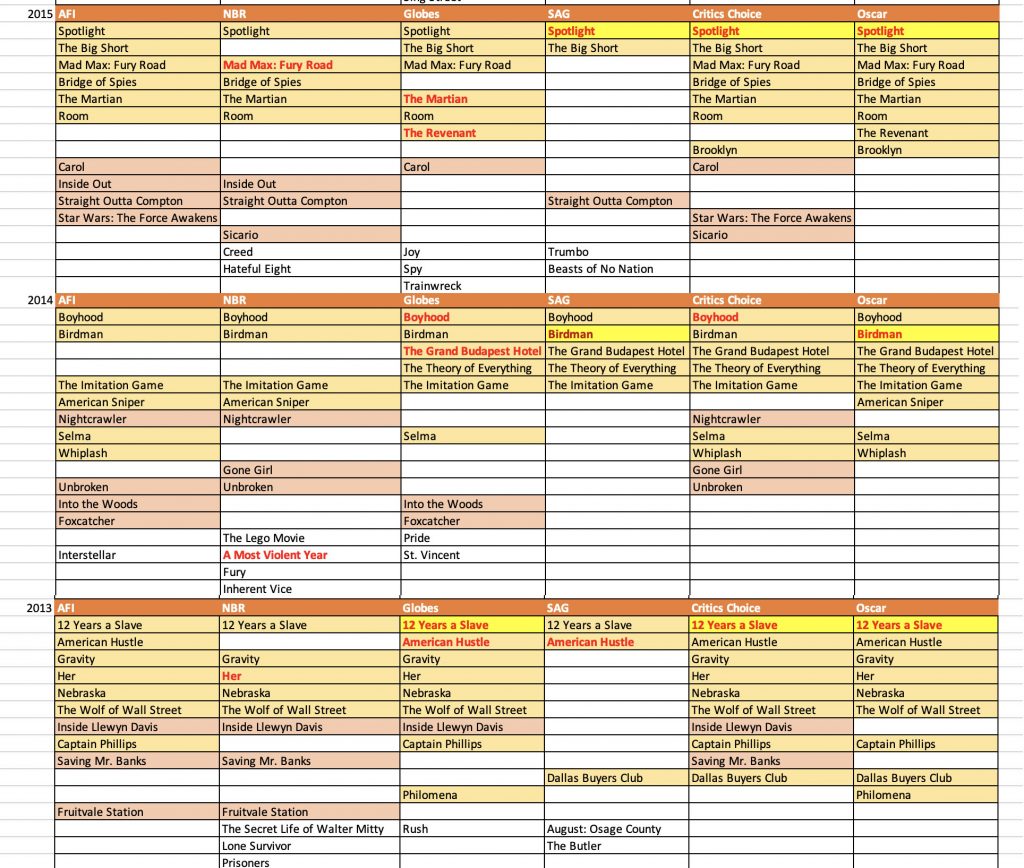 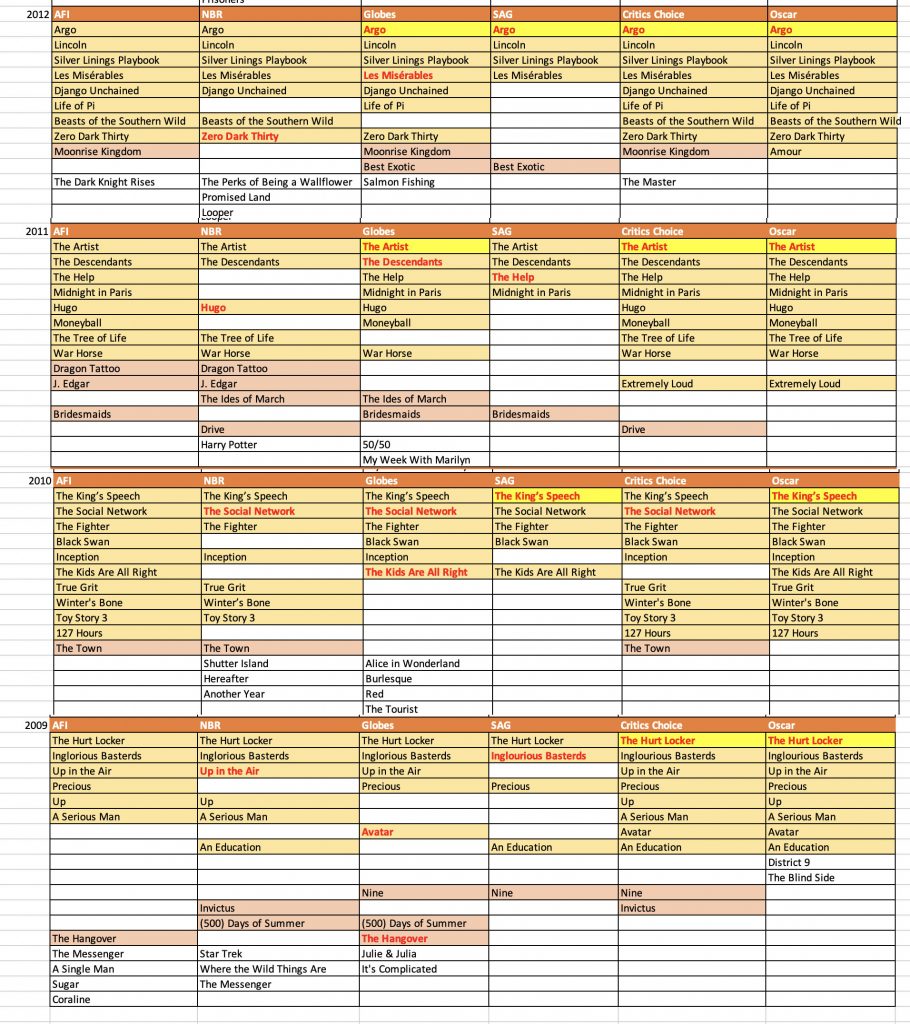 Now we have to ask ourselves which movies are likely to win these major awards? How will they break down? Will one movie juggernaut all the way through like Argo did? Argo had the benefit of sympathy for Ben Affleck, which kicked into gear once he missed out on the Best Director nomination at the Academy. Will the excitement to see another woman win overtake the whole season? Can Chicago 7 rally to win over one of those groups? Like — to take the top prize for Best Picture?

We don’t yet know which movies will make it in but in all of the years named below, only three movies came out of nowhere completely: The Blind Side and District 9 in 2009 with a solid ten nominees.  Amour had a prior Foreign Language nomination from the Golden Globes.

So there is a more than good chance all of our nominees have been placed in these groups so far. Then again, this year could be completely different from years’ past due to the scheduling disruption.  But I figure, if we can predict the SAG ensemble OR the Critics Choice and Globes? We will know our winner. More or less.

The thing to remember about this year is that it is highly unusual in all ways. The first is existential. We are in a kind of bizarre moment of extreme panic and fear in this country, partly due to COVID and partly due to race relations, and partly to do a kind of wave of conformity rising on the Left overall. That’s just part of why it’s strange. We also have no actual movies, no in-person events, no glamour, no stars, no big audiences or applause or anything like that. Finally, the schedule — a late April Oscar date hasn’t EVER happened. They’ve been in April before, but not late April.

Given all of that, anything can happen. Thanks to Marshall Flores for helping with the charts.

Mark Johnson’s Good as Gold: The End of a Long, Strange Journey

by Clarence Moye
8
No Result
View All Result