Anyone who looks broadly at the Oscar race this year will see a potential narrative emerging. It is not a “story” yet, but it will be, I suspect, as the wins start to come down. And that is the inescapable probability that Netflix is about to win a whole shitload of Oscars. What does that mean exactly for the future of the Oscars and Hollywood?

Over the past 20 years, we’ve seen outlets sink and swim under the new mutation that has created entirely new species in media. First, blogs, then opinion-based news, then micro-blogging and social media. We might be living through the end of Facebook right now (lord, how I wish it was the end of Twitter). Or they might find a way to improvise, adapt, and overcome the forces working against them right now (the government, censorship, tribalism, etc). So much has changed in the last 20 years – including living through a time when we can curate our own reality depending on which information stream we follow – but one big change is in the process of potentially altering how movies are watched and distributed.

Maybe 2020 was a one-off. Maybe COVID was a one-off. Or maybe it wasn’t. Scientists have been warning of potential pandemics for years now, not just with viruses (natural born or gain-of-function or even as bio weapons) but resistance to antibiotics among other potential disastrous waves that could mean fewer people gathering in groups to watch movies and more people taking refuge in their houses to watch them. In addition to that, millennials like movie theaters okay, but they are just as happy watching YouTube or Netflix on their phones. In fact, most watch their phones more than they watch anything else. They did not grow up valuing movie theaters as sacred spaces like many of us older people do. They are the future. What they like, what they watch, what they consume will decide the future of movies.

Best Picture seems to be down to two movies: The Trial of the Chicago 7 (Netflix) and Nomadland (Searchlight, which used to be Fox Searchlight, which is now owned by Disney). Searchlight still looks like a movie studio release, but it too is part of an empire that has built its house of bricks. Disney Plus is covered in the streaming area as well, meaning they have crossover platforms for content that can easily make the switch from the old way to the new way.

The big one is Best Picture because that was traditionally constructed to honor films produced and distributed and exhibited in movie theaters by the big studios. The big studios were crashed by the independents at the Oscars round about the mid-90s. Miramax started it but then it cascaded from there. Now we’ve seen Indies like A24 and Neon winning Best Picture. But as of yet, no streaming platform has won.

Thus, are we really even looking at streaming vs. theatrical if we’re looking at these two movies? I am not savvy enough in this area to know what I am talking about, but I can look at it from the perspective of an Oscarwatcher. I can tell you that Netflix winning Best Picture will be a bigger game changer than if Searchlight does, simply because Searchlight has won in the past, and quite often, with The Shape of Water as their most recent winner. Netflix got close when they won Best Director for Roma, but they have yet to claim the big prize.

The thing about Best Picture, though, is that it’s driven by actors. Actors like to work. Actors like that Netflix is a vast universe of opportunity. Directors like to work, and many of them have projects at Netflix that could not and would not get made by any other studio. They have freedom to make 3-hour movies that probably wouldn’t break even theatrically. They are not constrained by the need for opening box office. Frankly, neither has the Oscar race for some time now. Box office has not mattered with any of the Best Picture winners since they pushed back the date by one month and expanded the ballot. As the Best Picture race has become more insular, the first thing they abandoned was the need for box office (with the caveat that the movie could not LOSE money).

This site tracks box office – but they are counting the total money made, rather than how much they’d made prior to winning, which I think matters: 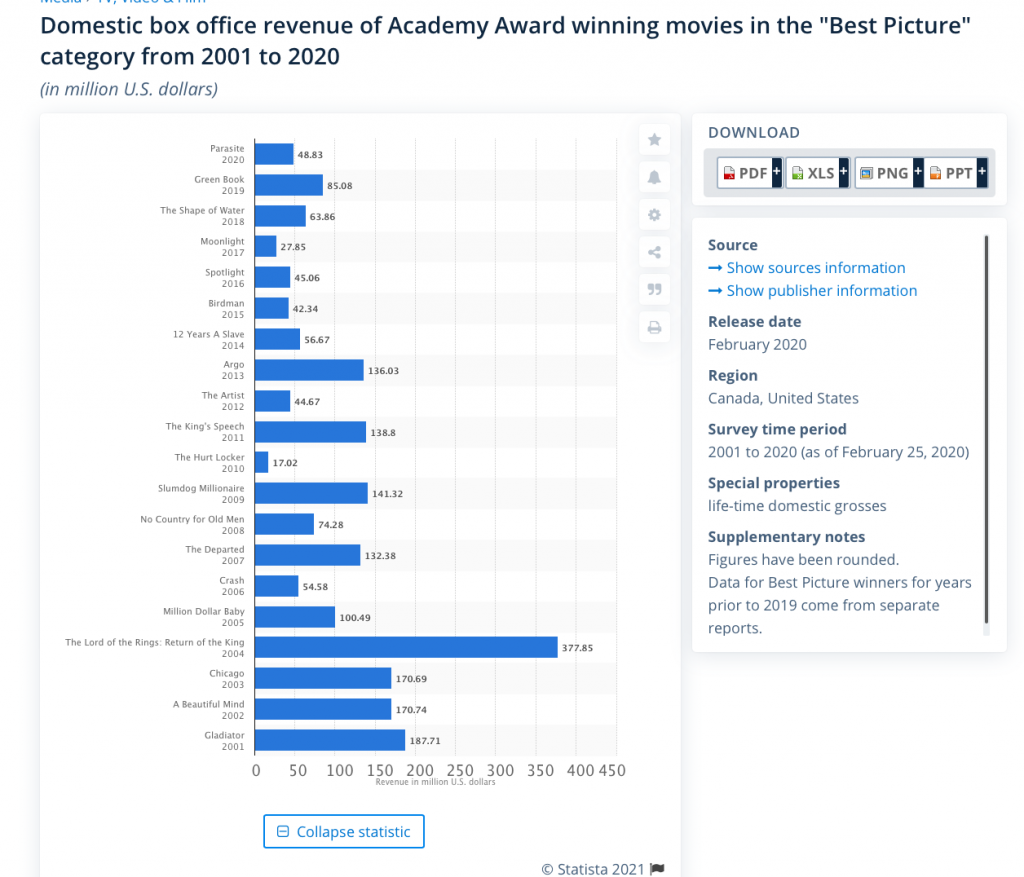 The Indies that win Best Picture that make no money whatsoever prior to winning can make some money they would not ordinarily make, so in that sense the Oscar race works as it always has: as a way to drive profit for a particular film. Hollywood studios like Disney and Warner Bros. make their money with massive tent poles that are international smash hits. They are making piles of cash on these films such that the Oscar race for Best Picture has come to seem like a hobby of sorts, or, as someone once put it to me, McDonald’s offering salad alongside their fast food. It gives the perception that they still care about your health while also earning billions on the easy sells to the masses. 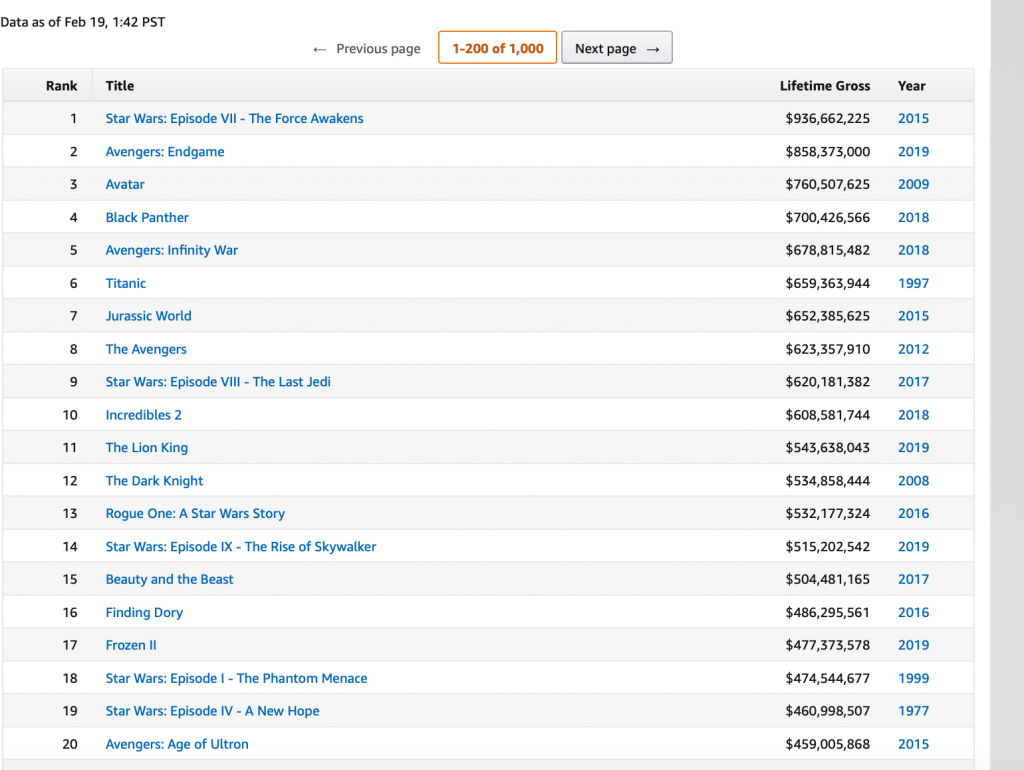 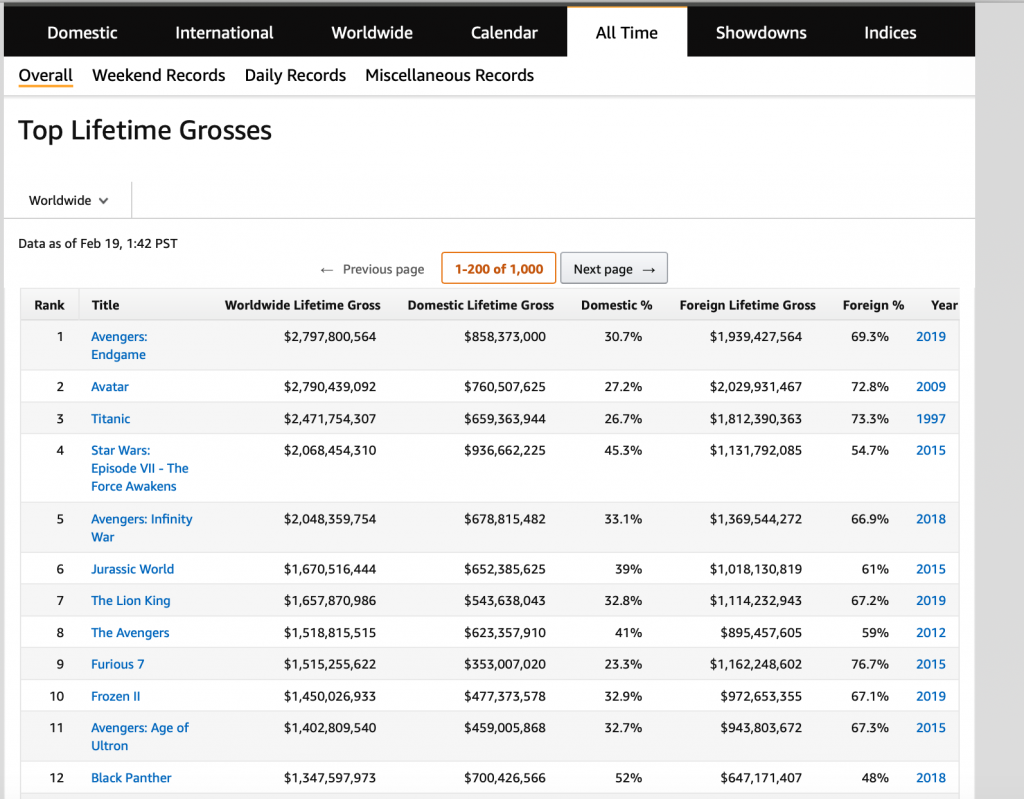 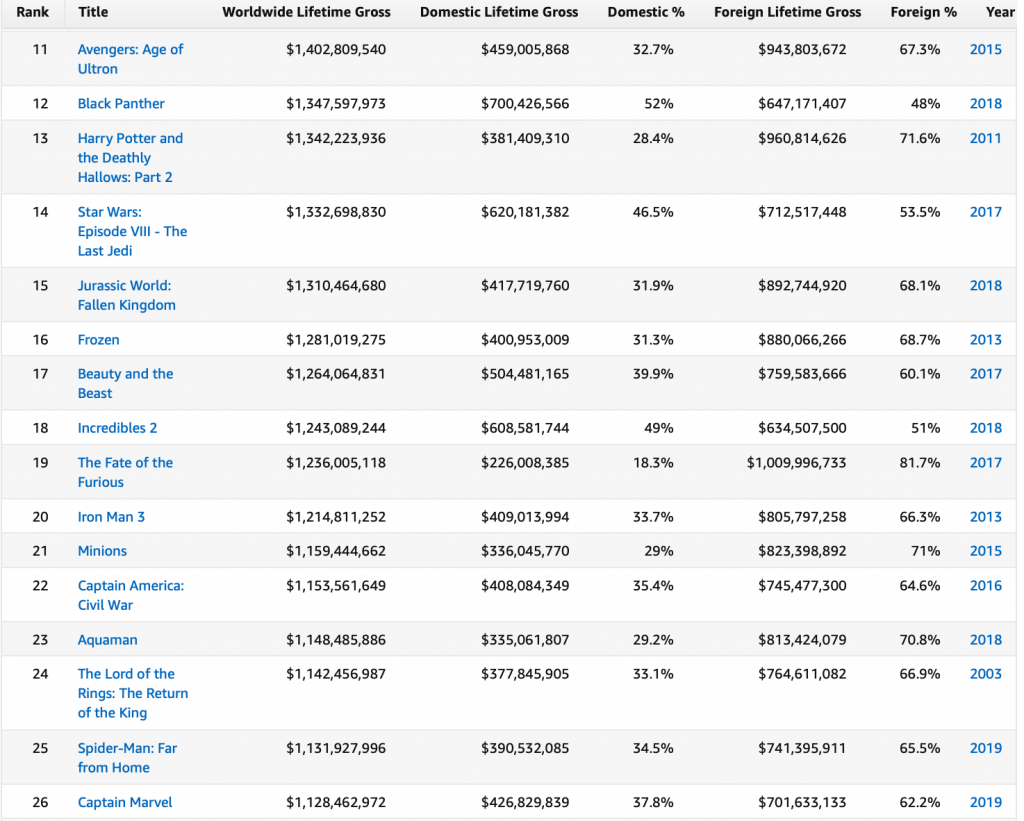 With Titanic (domestically) and Return of the King (internationally) as the two main Best Picture winners that place on any of these charts, it’s easy to see how shifting the date back by one month has effectively separated the conjoined twins of Best Picture winner and box office champ. It once mattered, but it no longer does and no one can make the case that it does. Movies make so much money now that there can’t be a box office story that wows with the same kind of shock and awe as Titanic did in 1997.

The one anomaly is Black Panther, which is a movie that made a lot of money but also offered the Left what it desires and requires – a film made by black artists with an all-black cast. Thus, the model can work if it meets the demands of a generation that needs for there to be inclusivity across the board – that is a bigger deal, even, than originality in storytelling.

So, if we take box office off the table, more or less, what would be the reason for not welcoming streaming into the Oscar game? I can’t think of one. But I also can’t think, necessarily, of why Oscars would necessarily be something streaming platforms would compete for in the same way that they did when it was about filling seats at movie theaters. Streaming platforms already have their audiences. They’ll watch anything. In fact, often times, the less prestigious the offering the more likely people are to watch it.

That is our conundrum in 2021 and a tiny drama that may or may not matter. But there are others factors that will be at play with the Best Picture race, and I’ll be writing more about that in the coming days and that is what Nomadland represents and what the Trial of the Chicago 7 represents. It might be in THIS conversation that we get to a more powerful truth about this past year.

In general, “good people doing good things” is how the voters have chosen to represent themselves for a good many years. Even when Scorsese won for The Departed, and the Coen brothers won for No Country for Old Men (a great run for wins for darker themed films) and Kathryn Bigelow won for The Hurt Locker, they were still “good people doing good things” because they were being applauded for finally recognizing Scorsese and finally recognizing the Coen brothers and finally recognizing the first female director to win with Bigelow. It still felt good to watch them win, even if their films were clearly not “good people doing good things.” The same goes for last year’s winner with Parasite. How happy were they to escape the morning’s headlines had all of the major winners been white?

To me, The Trial of the Chicago 7 is very much reflective of the cultural left in 2021 in almost every way imaginable. While true that the idea that we are meant to mostly celebrate films that aren’t just good people doing good things but rather, inclusive people doing good things or preferably people of color or women doing good things. We are constantly curating and pruning and cultivating our utopian diorama of the most perfect life. But the truth of it is that the Left, like America overall, continues to be populated by white people. In America, it’s roughly 60% (for now). So, if they’re being honest they will celebrate Chicago 7 for reflecting who they really are – activists who are trying to do good in the world by fighting against injustice in government, specifically the Vietnam War.

Nomadland is, I think, another kind of truth from a different kind of perspective and an empathetic one. It doesn’t seek to necessarily point fingers or demonize anyone. It’s not a movie that is pro or anti Trump, for instance. Nor is it about laying blame for the desperate state of the white working class. Anyone who really knows the history of manufacturing and free trade will recognize pretty quickly that these are people with no future, with lives that were wrecked by the recession following the financial meltdown of 2008 combined with sending jobs overseas. The populist movements that rose up on the left and the right in 2016 addressed this directly, but they offered two very different solutions.

Foreign Language
Another Round (Denmark)
Collective (Romania)
Once Upon a Time in Venezuela (Venezuela)
La Llorona (Guatemala)
Quo Vadis, Aida? (Bosnia and Herzegovina)

Shorts: 'Feeling Through' Celebrates Kindness and the Human Spirit

by Mark Johnson
4
No Result
View All Result