I know, you’re thinking how in the world did Hillbilly Elegy make it in as a nominee? How did it do so well? Look, man, your guess is as good a mine. I personally loved the movie and thought it got a raw deal from the critics so much so that I would have put it on my top ten list even if I didn’t like it out of PURE SPITE. But luckily, I did not have to do it. I found a story that was moving and one I could personally relate to. I believe that the hatred against it had to do with one thing and one thing only: Trump. And how just having voted for Trump, or being a Trump supporter or even being assumed to be a Trump supporter is tantamount to being a witch in Salem in 1692. Critics of the film would say no, it was just bad. Okay fine. Either way, the movie showed up in a lot of places on our preferential ballot list and high on the ballot, not low on the ballot. It was often a number two or three or four.

Our preferential ballot, however, was filled by AwardsDaily readers and people who follow us on Twitter. It totaled out at around 350 in all, which isn’t really enough to get a pure sample. When Rob does our actual AwardsDaily ballot later on you will see a better idea of what kinds of films readers like. Judging by this quick take two films dominated: Nomadland and Promising Young Woman. Nomadland came in so strong it triggered the surplus rule (so did PYW) but it also would have won if these ballots were determining a winner.

I ran the simulation two different ways. The first, was to see how many nominees we might end up with, and again to see which film might come out the winner. This is no way indicates how the industry will vote, of course, although I imagine if Hillbilly Elegy gets in and, say, Judas and the Black Messiah or Da 5 Bloods doesn’t, as happened here, Film Twitter is going to go full China Syndrome.

First up, I had to ask Marshall Flores to explain to me how to do the count in the first place. He threw back at me a lot of math stuff, which I in no way understand. I actually don’t think I did it all the way right but I got close enough. The surplus rule, in this case, doesn’t make much of a difference. It was abundantly clear which films were popular and which films weren’t. Marshall elected not to run the sim on his end probably because he is sick of me asking him so we’re relying on my math here, which might lead you to believe that the final list is wrong. But I feel certain it is right. More or less.

Here is how Marshall put it:

After surplus, it looked like this – the films that are in bold now have a nomination. So then any films that have these in their number one spot we move to their next choice:

What was most surprising to me was how Hillbilly Elegy kept turning up in many different locations, from top of the ballot to second place to third place. That is how it ended up being placed in the top 9.

Eventually, we got to 9 films in for nomination:

That is the predicted 9 going by our ballots. We will have to check back to see how things go when Oscars are announced.

Voting is different when people are picking a winner but I decided to run it anyway, just for the fun of it. Nomadland came on as strong as Moonlight did back in 2016. It showed up everywhere – the most number ones, as a number two and a three and all the way down the ballot. Almost everyone chose it somewhere. The only film that gave it some heat was Promising Young Woman. The films that did well in the nomination round didn’t so as well in the winning phase. It comes down to what people who chose Chicago 7 and Minari put as their number two or three since they ended up near the top. 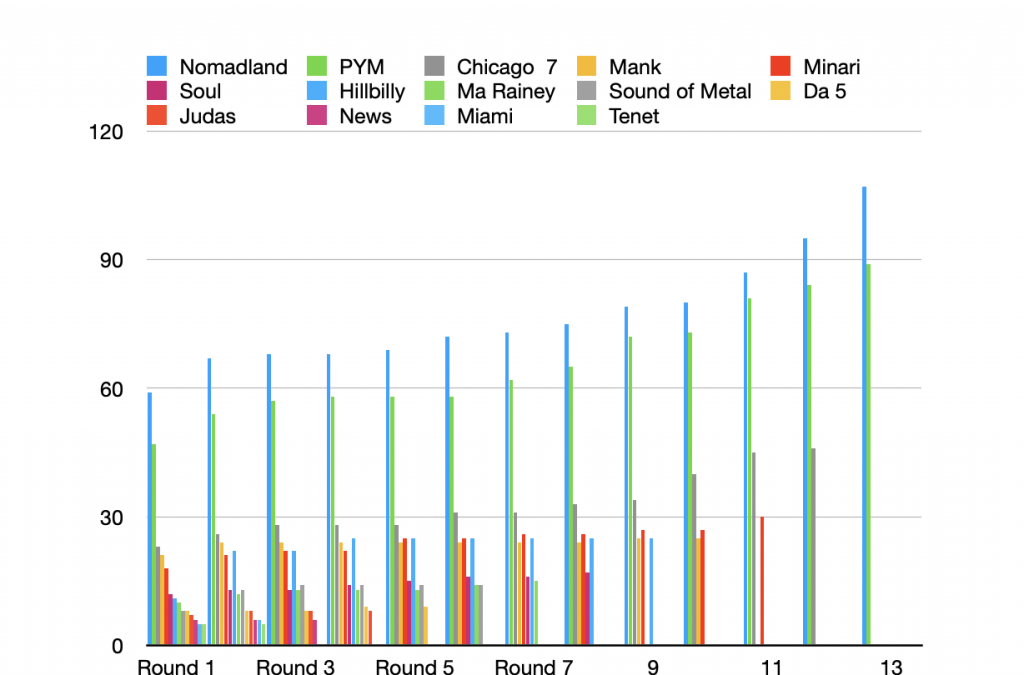 And that, my friends, is that.