by David Phillips
in Interviews
0

It should be no surprise to anyone viewing Minari that it is a deeply personal film. Lee Isaac Chung’s story of a South Korean immigrant family trying to make a life off the land in rural Arkansas is so specific in detail that it feels like a film composed from memory. As I learned from speaking with Isaac, that’s exactly what Minari is – the memory of his childhood.

In our conversation, Chung talks about the creation of the film and the standards he and the cast and crew laid out for themselves in servicing the story. Minari is one of the best films of the year – one that finds a way to be both gentle and grand at the same time. It is a film told through the eyes of his culture that is also a universal American story.

AD: I know Minari is autobiographical, but just how close is the movie to your own personal story?

Lee Issac Chung: It’s very close in many ways. It started from a lot of memories that I wrote down, and I think almost every scene in the film is there because of a memory or because of something that actually happened. The characters have changed, and there are also certain scenes that I put into the film that are more like wish fulfilment than actual events that took place. And there were things that I regret from childhood that I’m trying to work out on my own with it. So all of it is personal, even if it’s fiction, all of it is from an incredibly personal place.

AD: When you say wish fulfillment  is there any particular part you could share that falls under that category?

LIC: Well for instance, the run that the boy takes at the end, that’s kind of a nod to different films that I’ve seen, but more than that it’s also something I wish I had done for my grandma. That never happened.

AD: It’s such a beautiful movie to look at, but it also doesn’t deny that there’s nothing more plain than a trailer in the middle of the woods. [Laughs] How did you manage the mixture of the beauty of landscape, but also the plainness of certain aspects of farm life?

LIC: For me it’s always about balance, and always keeping in mind that a film has to have some aesthetic pleasure when you’re watching it. We talked a lot about keeping things elegant, and letting elegance be part of the character of the family. But at the same time, we wanted to not to make it over-the-top so that we think this family is living in a palace of some sort that is somehow boxed in by a trailer. It was a tricky balance that we were always trying to get right in constant discussion with each other. Luckily the team that I worked with were all on the same page—Yong Ok Lee, Susanna, Lachlan. Everyone was really seeking to bring beauty to this family and to this story, but also a sense of reality. It’s a tough aspect of filmmaking, finding that balance, and I still watch the film and pick it apart, to be honest.

AD: I think the other balancing act is the film’s pacing. It’s a very deliberate film, and it asks you to be patient with it. Did you feel any risk in doing it that way? Were you ever worried that there wasn’t enough action going on on the screen?

LIC: I definitely worried about that a lot. I just tried to stay true to what I felt would fit with the authentic pacing of agrarian life, and that’s a life that I know quite well. I’ve seen Hollywood stories about farming, and sometimes they just ring false, because of the pacing and the rhythm, and the action in them. There’s a certain feeling about farming life that I wanted to accentuate. Harry Yoon and I, the editor, we were constantly trying to figure out what’s the right pace, and making sure that no moment in the film feels like we made an editing error and put in a little bit too much time. We thought every moment needs to feel essential, but at the same time not rushed. It’s very much an intuitive personal choice and a very subjective thing.

AD: The performances are so key in matching the pacing. This is a movie where a lot of the time glances are just as important as the dialogue. Can you talk about how you wanted the performances to come across?

LIC: I really appreciate that observation. The way that I grew up, my parents and I had quite a language barrier with Korean and English, so I feel like that’s the language we speak with each other. We speak in our silences often. We speak in our gestures. There’s a lot of observation that has to go on. I kind of feel like in my own home life now, with my wife, we’re pretty quiet people. I was really looking for a cast who I knew would be able to communicate a lot with their presence and in their silence. I was watching a lot of films that Yeri Han was in, and her in particular I felt—she is going to be perfect for this. And sure enough, in the editing room we were often saying, “when in doubt, cut to Yeri.” Because we just felt like she was always doing something, always feeling something that informed us as a viewer what we’re supposed to feel and what the stakes are. That was also true for the other actors, we looked for people who would be able to speak through those silent moments.

AD: I’m glad you mentioned Yeri, because her performance is my favorite in the film. I think it’s the trickiest one in some ways, because it would be very easy for her character to seem antagonistic if the tone wasn’t right.

AD: When you get down to it, though, she’s just very practical, and she’s concerned about the future of the family. And her performance, the relationship between her and Jacob is so key, because it’s all the unsaid stuff between them that matters. I thought she was remarkable. 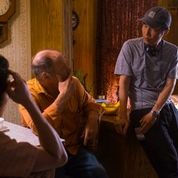 LIC: She’s incredible. When we cast her, we figured a lot of people don’t know who she is. And the studio, A24, they’re great, but you know, they’d never heard of Yeri. And I remember just thinking that somehow having Yeri on board—she’s the secret weapon here. People are going to be shocked. Because she’s so good. And with Jacob’s character, things that he said could have come across as very reprehensible, because of what he’s bringing his family through. And yet, what Steven does with his silences makes it so you can relate to him and understand him. Yeri, with the way she performs Monica, you completely relate to her. And those words of complaint that she has, you know that there’s something very deeply human and very deeply sympathetic about what she’s saying. She’s not raising any frivolous concerns, but these are really life and death. And I can’t say enough about her, and those two in tandem, the way that they create this marriage onscreen through their work as actors.

AD: Steven is such a naturally sympathetic actor that he makes Jacob seem more palatable. It’s hard to look at him and not see a good person.

LIC: [Laughs] Yeah, that’s right. You forgive him his flaws. We’re all flawed.

AD: Then of course you have Yuh-jung who comes into the movie and she brings a completely different energy and also this tragic arc. Can you talk about what she does for the film?

LIC: We were finding in the editing room that we needed to get to her sooner. Because she injects life into the film, so emotionally speaking we had to get to it sooner than it was in the script. That was a lot of fun to figure that out, and also to have that feeling once she arrives that she’s going to bring this life and energy and she’s going to upend everything the family is doing. She’s the one who kind of upsets the governing principles and uneasy peace within the home.

An interesting thing is that we filmed all of her scenes first, because we wanted to preserve for the kids that journey of getting to know her. So we kept her and the kids separated up until that point. They met very briefly just to be polite, but really it was only on the set during work that they started to get to know each other. So, when I see her scenes and her arrival, I just think about how that’s also tied to the way that we started filming this film together.

LIC: We actually had a fire on our farm when I was growing up, so that was something that I thought about and knew that I would have in the film. Something that was a guide for me, in the writing, was Rossellini’s Voyage to Italy. You see a couple that’s really disintegrating, and it’s this moment at the end, when they’re confronted with death, that the stakes really let them see each other fully. It lets them see what they mean to each other on the most vulnerable terms. And Stromboli kind of has that as well with the volcano that erupted at the end. So, on a narrative level, I knew that I wanted to lead up to that moment and let the fire that we actually went through be reused to reclaim a calamitous thing that happened in my life and put it to good creative use.