Entertainment is changing, there is no doubt about that. It’s changing so fast it’s hard to keep up with. It isn’t just that Disney bought Fox, Fox Searchlight, Marvel and Lucasfilm. It isn’t just that streaming platforms like Netflix, Hulu, and Amazon are major players in this year’s Oscar race. It is that the industry is confronting a generational turning and there are big transformative changes headed their way. This is true about the kind of content people want to consume. Power among individuals has diminished. Power among the “five families” or the big studios has either diminished or consolidated. If you’ve been around a while you notice the changes. If you are just now coming of age you will not remember the way things used to be. You will simply be frustrated if any movie drops and you aren’t able to access it on your phone.

It has been a surreal year.

We’ve somehow arrived at the point of the Producers Guild nominations dropping on March 8, with the Directors Guild on March 9, and Oscar ballots due March 10. Unlike the current year’s Oscars, the PGA picks 10 nominees. They’ve always picked 10 since the Academy expanded to 10 in 2009. When the Academy shrunk back to a random number between 5 and 10, the PGA held onto the even 10.

With so few major films on offer, but the PGA still needing to choose 10, one wonders what films might creep in that then will be dropped off the Oscar list and what that mean for the Oscars. It’s hard to know, honestly, as the preferential ballot makes things very unpredictable, at least where the Oscar Best Picture is concerned.

Early on, the PGA had a reputation of liking the blockbusters over the tiny independents, and would often make room for them on their list. Films like Star Trek or Skyfall. But in general, they like to keep things respectable in terms of the films they choose. One would wish that they were a little more genre friendly, to honor great horror or comedy – they choose these films sparingly. Which is a shame.

I can’t imagine the PGA not nominating the only big studio film in the race, Universal’s News of the World. A film that most definitely would have been a hit at the box office and a family friendly holiday movie has been put into an ecosystem it was not really built for. But even still, it has captured the attention of anyone who has streamed it, and it enjoying an incredibly high audience rating on Amazon: 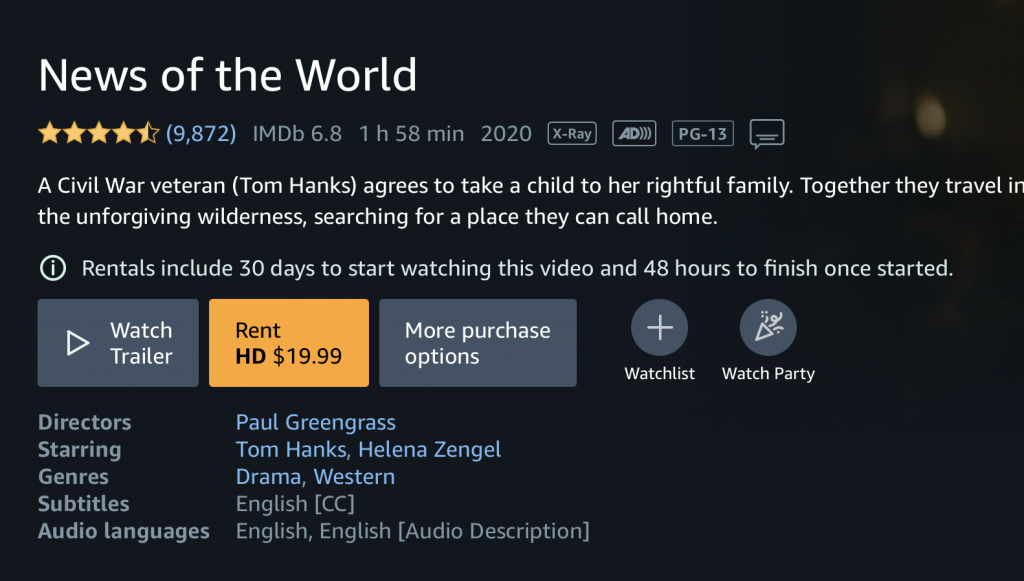 That means people obviously like the movie as they have no other reason to rate it so highly. But of course, a movie needs more than general likability to make it in on a preferential ballot. It needs passion and number one votes. Does this movie inspire passion the way, say, Nomadland does? Or Promising Young Woman does? I guess it depends on whom you ask. If it’s me, and I work in Hollywood, I would feel passionate about supporting the only major studio release in the mix. Nomadland is a major studio release in that it’s Disney and it’s Searchlight but it still retains a wee bit of indie cred all the same. Universal is a big box movie – with all of the trimmings. A western with set pieces and high production value, brilliantly made – one that begs for, aches for, a massive screen to spread itself out onto. There is something to be said about wanting to hold onto a piece of that.

Nomadland is a no brainer. Frances McDormand is one of the producers. We’re looking at another situation like last year where the directors are also co-producers. And that means this year’s slate at the PGA and at Oscar (probably) are going to have high numbers of women behind the camera – Nomadland, Promising Young Woman and One Night in Miami all have women named as directors and producers.

There is a specific way they count the ballot that is different from how the Academy does.

Here is how Marshall Flores puts it:

The PGA uses the full preferential ballot experience: there’s going to be multiple rounds of balloting where films are eliminated one at a time, until the field whittles down to a top 10. The Oscars on the other hand, use a truncated preferential voting system where there are only a few rounds of voting before the BP lineup is determined.

Essentially that means casting a much wider net for the PGA to include general liability, where the Academy tends to reward passion.

Oscar’s Best Picture is almost always comprised of PGA nominations, give or take one or two titles. Sometimes three. In the past, the darker movies can’t cross the threshold, like the year Gone Girl, Nightcrawler and Foxcatcher got into the PGA but not into the Academy’s lineup.

Since they expanded, the films that didn’t get into the Oscars but did get into PGA:

Oscar but not PGA:
The Blind Side
A Serious Man

Oscar but not PGA:
Winter’s Bone

2011 – 10 for PGA, 9 for Oscar
The Girl with the Dragon Tattoo
Bridesmaids
The Ides of March

Oscar but not PGA:
Extremely Loud, Incredibly Close
The Tree of Life

Oscar but not PGA:
Amour

Oscar but not PGA:
Philomena

Oscar but not PGA:
Selma

Oscar but not PGA:
Room

Once again, what you see is that films that make it into the Oscar race are usually films with strong performances dragging those movies in, like The Blind Side, Extremely Loud, Winter’s Bone, Darkest Hour. Other elements can drag a movie in as well, but in general, the actors are the difference between the Academy and every other guild except for SAG.

Our Oscar list will usually have an actor attached, but the PGA doesn’t necessarily. That’s really a key thing to remember. And of course, that isn’t always true, as we know that Gone Girl, Foxcatcher and Nightcrawler were likely seen as actor friendly films. But there are others that aren’t, like Star Trek.

Although we will be posting our formal predictions a bit later, these are films I think might land on PGA’s top ten. You can enter our contest, which is posted in a separate post here.

There is a chance, of course, that Da 5 Bloods gets in. If this is our lineup for PGA, one or two will have to drop off for the Oscar ballot.

Watch: Scott Wheeler Discusses the Makeup and Prosthetic Work Behind ‘One Night in Miami'

by Sasha Stone
60
No Result
View All Result