BAFTA Preview: When Voting Members Can’t Be Trusted to Pick the Right Nominees

Nominations must be reconsidered

We were reminded today by Next Best Picture’s Will Mavity on Twitter about the strange new rules put in place by the BAFTA to ensure there is equity in the nominations. Equity is not equality – it means equality of outcomes so that representation is guaranteed. This will impact the Best Director and acting categories where the nominees are not chosen by the voting body at large. They all vote on the long list as per usual. But the nominees in these crucial categories are going to be done by juries.

So no one’s really discussed the new BAFTA voting process:

Everyone voted on the longlists. Next each category (except Picture & BTLs) has a jury assigned to it consisting of 7 to 12 voters (only 50% need to be BAFTA members) They meet & discuss before choosing final 6 nominees

But here’s the weird part. They can’t guarantee that all of the jury members are even BAFTA members: 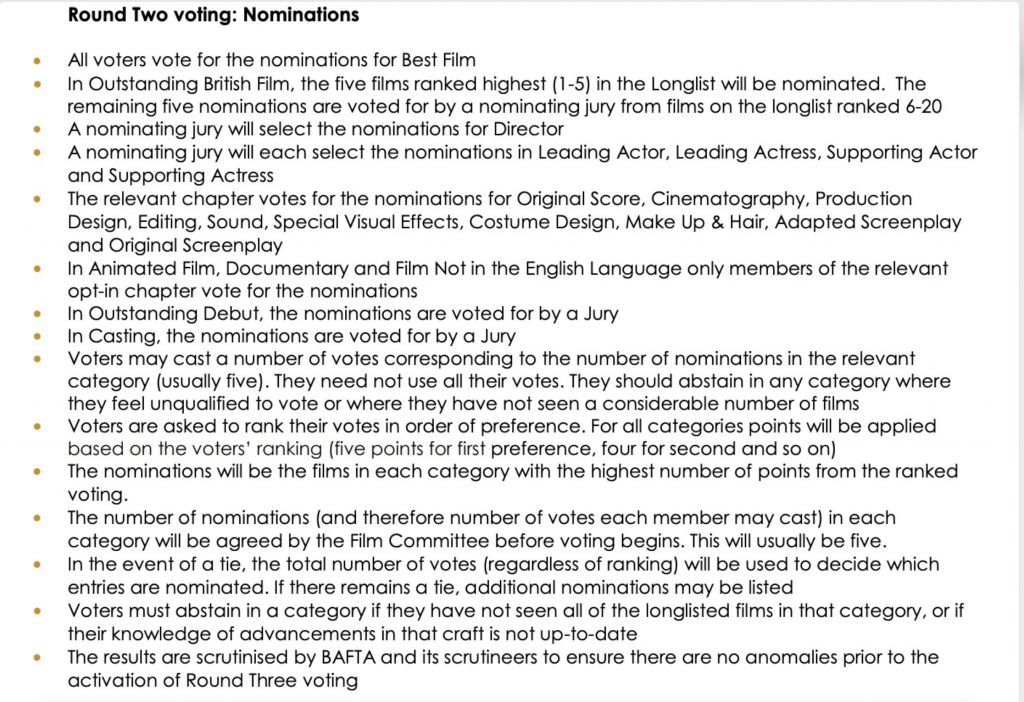 This isn’t new news. We’ve known about it for a year but considering the BAFTA nominations are dropping on the 9th it’s probably a good time to revisit this process. The aim is clearly to guarantee equality of outcomes, but it means that the nominees for these categories will not have been voted on BAFTA necessarily. BAFTA has some input but they are not to be trusted in the delicate area of inclusion and diversity. This puts, I think, undo pressure on anyone who isn’t white or male to “carry water” for an institution that desperately needs to change its diversity numbers. That pressure being – wondering why they earned the nomination in the first place.

BAFTA is in a bind, of course, because the rules put in place might not have guaranteed an equality of outcome if the voting members simply picked what they liked best rather than making sure enough women and people of color are represented – and if they came up with all white nominees and no female directing nominees they would be greeted with an onslaught of angry headlines and face boycotts.

But going this route in effect cancels out the whole point of having awards and calling them BAFTA awards. In fact, they’re really just doing what the Gothams do, or the AFI does or the LA and New York film critics do. They aren’t voting so much as negotiating, hand-picking and — let’s be very clear about this — covering their ass. That’s fine, of course. Who doesn’t want to cover their ass, knowing how badly they’d be scolded otherwise, but it does make predicting a little bit harder. Or does it?

Here is the long list for Best Director – now imagining a jury of only maybe 50% BAFTA members looking at it, alongside — carefully selected people who might counsel them on what they might pick to avoid a shitstorm? They are not required to meet any type of quota. They could theoretically pick five white males all on merit – but come on, who are we kidding? Maybe voters would. Zero chance a hand-picked jury will.

Knowing that they are going to pick from each column, and will probably pick the best films – or at east the most awarded, that likely means — I would guess – two men and three women. And probably not two white men, I would imagine. They are choosing six nominees in the category. So maybe something like:

I imagine that would be a Best Director lineup that would satisfy those pushing for change. They do have a long history of ignoring the films made by black directors, but especially those that dealt with slavery or race issues. They faced headlines for weeks about how racist they were. Thus, I imagine they knew this year they would have to cover their ass. And it appears to be foolproof.

Despite that, this list doesn’t look all that different from what we’ve been seeing before because voters have been kind of voting this way anyway all year. Look at the Gotham nominees for Best Picture:

All five are films by women. The Golden Globes – three director nominees are women and two are women of color. This has been consistent mostly through awards season, though we’ll have to wait and see what the DGA does.

In general, the way we pundits gauge popularity of a specific film is whether it gets a Best Picture AND a Best Director nomination. But Best Director can’t be taken into consideration so only Best Picture will give us an idea of just how popular each film is and it may or may not correspond with Best Director.

Best Picture will be five of these. I think Ma Rainey, given its popularity with nominations, has a shot.

The acting nominees are also led by a jury, from Deadline:

In the acting categories, in order to align them to all other craft categories, voting in Lead and Supporting will move to Chapter voting. In the new Round One voting (see more on this below), the acting chapter will rank its top 15, with the top 12 longlisted. As with Directing, a specially convened longlisting jury will select the final three based on the performances placed 13-22 of the chapter vote to ensure intersectional diversity. In Round Two, a nominating jury for each acting category will consider the 15 longlisted and vote for six performances to be nominated (also an increase from five in previous years). Again, all members vote for the winners.

All acting entrants must now decide whether to submit for lead or supporting to allow for a broader range of performances to be considered and to provide greater clarity for voting members so they can focus solely on the caliber of the performance, BAFTA said. In Round One, actors cannot be longlisted more than once in one acting category, but can appear in separate categories for separate performances. Majumdar says the org will be looking to extend changes to the craft categories in order to “shine a spotlight on diverse voices and encourage that.” Adds Samuelson, “We are at pains to say the steering groups are going to remain indefinitely. We’re going to review progress all the time and see what we need to do — this is just the first phase of change.”

Here are the long lists for acting categories:

They have plenty of options here to populate their nominations with the most diverse lineup they’ve ever had. After the Globes chose a woman of color’s film for Best Picture and Best Director, three black acting winners — the BAFTA is like, “hold my beer.”

We’ll be putting up a contest in a day or so and you can try your hand at figuring out how it might go.