Regina King’s presence is felt throughout Critics Choice Award winner One Night in Miami. For her feature debut she chose to cast herself as a silent observer, as a fly on the wall, and a witness to history. The reimagining of a pivotal moment in Civil Rights history has already been nominated for a Best Director at the Golden Globes, along with a SAG ensemble nomination, not to mention being named one of the 10 AFI Movies of the Year, the winner of a Critics Choice Award, and the recipient of many guild plaudits. Its remarkable lessons are now being used as a resource to help educate students.

Among the many reasons King’s film has become such a standout is her adept sensitivity to each of the legendary figures on screen, and her precisely calibrated visual sense that puts the viewer in the same room as these icons in American history, which was the whole point as envisioned by screenwriter Kemp Powers.

What happens when you put substantial voices and extraordinary talents together in the same room to discuss a pivotal moment in history is the question asked here. Adding to the emotional impact is our knowledge that two of the men – Malcolm X and Sam Cooke – would be shot to death, while two others – Jim Brown and Cassius Clay – would live to reach the pinnacles of achievement in sports and entertainment, each becoming pioneers in realms never previously dominated by Black men.

King learned how to direct by acting, but also from opportunities directing in television, and thus brings a lifetime of experience in front of the camera to showcase an ensemble in a way that celebrates them, not just as revered revolutionaries but as brilliant actors.

King’s film takes its time rolling out the story, which examines the ideological angst of so much talent not encouraged but rather used when it was convenient. She shows the disconnect between the internal and hidden conversations of Black men who don’t yet have equal rights and are standing on the precipice of the ongoing fight ahead. Having them all together in one room is a reminder that there weren’t many other places where they could gather and speak so freely and so openly about their conflicts.

King’s directing style turns out to be very much like her acting style. It is subtle, moody, evocative, and ultimately deeply moving.

But One Night in Miami is more than just a great movie – now it’s being used as a tool to educate students across the country on the history of Civil Rights.

As part of Canvas, their ongoing series on American culture, PBS has profiled King and her film to introduce to students. They’re invited to watch the film and then ask themselves the following questions:

Warm up questions: Have your students identify the 5Ws and an H:

Then have students share with the class or through a Learning Management System (LMS).

Media literacy: What else would you want to know about King’s film that wasn’t covered in this short video clip?

Dig Deeper: Students can watch the film and write a short review, focusing on ways the film is meant to reflect questions of civil rights and equality that are relevant to current civil rights struggles.

One Night in Miami is actor driven, but its director has a notable presence throughout.

In the interview, King says this about the time we’re living through – where racism and oppression are once again rising to the surface:

“As much we love being Americans and as much as we love America, just even what’s going on now, and I think I’ve heard President-elect Biden say ‘America, this isn’t us.’  It is us. It is a part of who we are. The question is, how are we going to change what we write in history to come?” 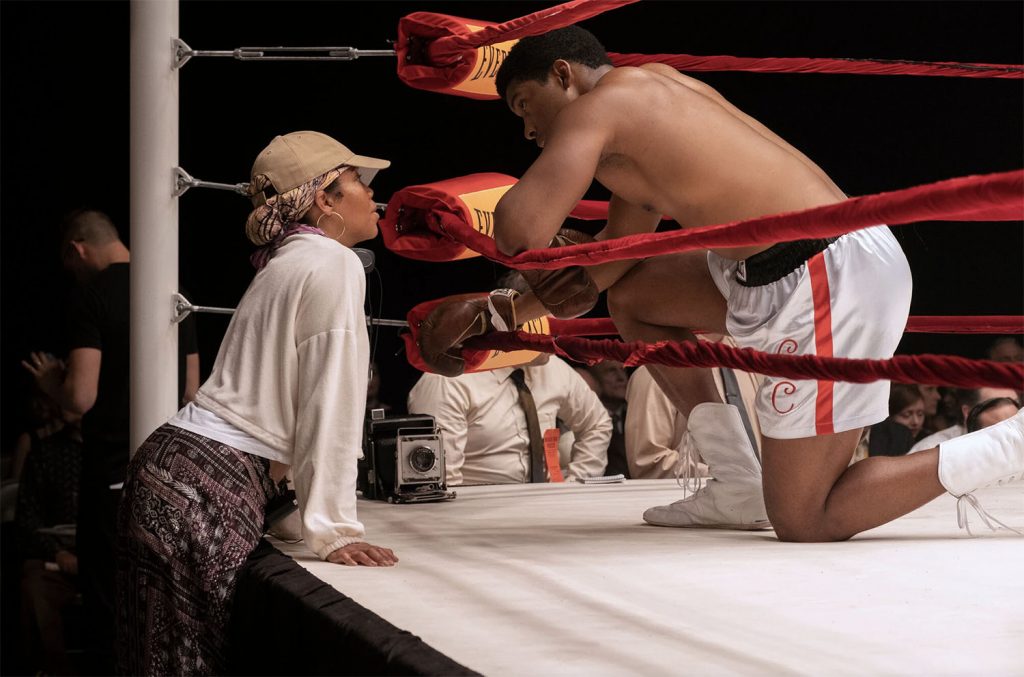 Every scene of One Night in Miami is shot in a way that not only puts us in the room as onlookers but as visceral participants. King reminds us that telling America’s history honestly depends on finding the correct point of view. She lets us see the conflicts and reconciliations from the vantage of eyewitnesses present at the moment. We watch through partitions, through doors, standing behind and immediately alongside these forthright, determined, and powerful men.

Moreover, we’re never unaware that we’re seeing this recreation through the mind’s eye of Regina King herself. That is a strong choice and a provocative one. Here she is, a black woman helming a major feature film that is headed toward Oscar glory, standing on the world stage and making history in her own right, in a way that these men at the time could have scarcely imagined but would now be proud to see, knowing that a piece of their dreams that night has come to fruition.

Tags: One Night In Miami...regina king