The BAFTAS – The Good, the Bad and the Ugly of This Morning’s Nominations

We figured out, with the help of Will Mavity at Next Best Picture that the BAFTA were going to use juries to decide the categories of Best Director and the Acting categories. They’d announced it last year when they were accused of racism with their nominations. It was part of their overall transformation to be more equitable. But what does any of it mean? It means they did what a lot of white people have done this past year – relieve themselves of their eternal guilt by amplifying women and people of color. For some people that’s a great thing. For others, not so great. It has touched almost every corner of American culture since the protests began last year. Massive corporations have become “woke” in order to appeal to a generation that not only requires it, but also brands itself that way.

Essentially, the whole BAFTA membership chose the long list – which was then winnowed down to the nominees by juries. This part is very bizarre. I think they should have done it the opposite way. Had a jury select the inclusive movies first and then have the whole membership watch them and decide which they like best. That way, at least they are still being judged mostly on merit, or by the BAFTA membership’s own taste. Either way, here is what I think is the Good, the Bad and the Ugly of these nominations.

Franklin Leonard on Twitter explained it as not just a jury to be inclusive but rather to retrain voters to understand their bias to then choose films that no one has really singled out for an entire year – the idea being the entire awards race is biased. 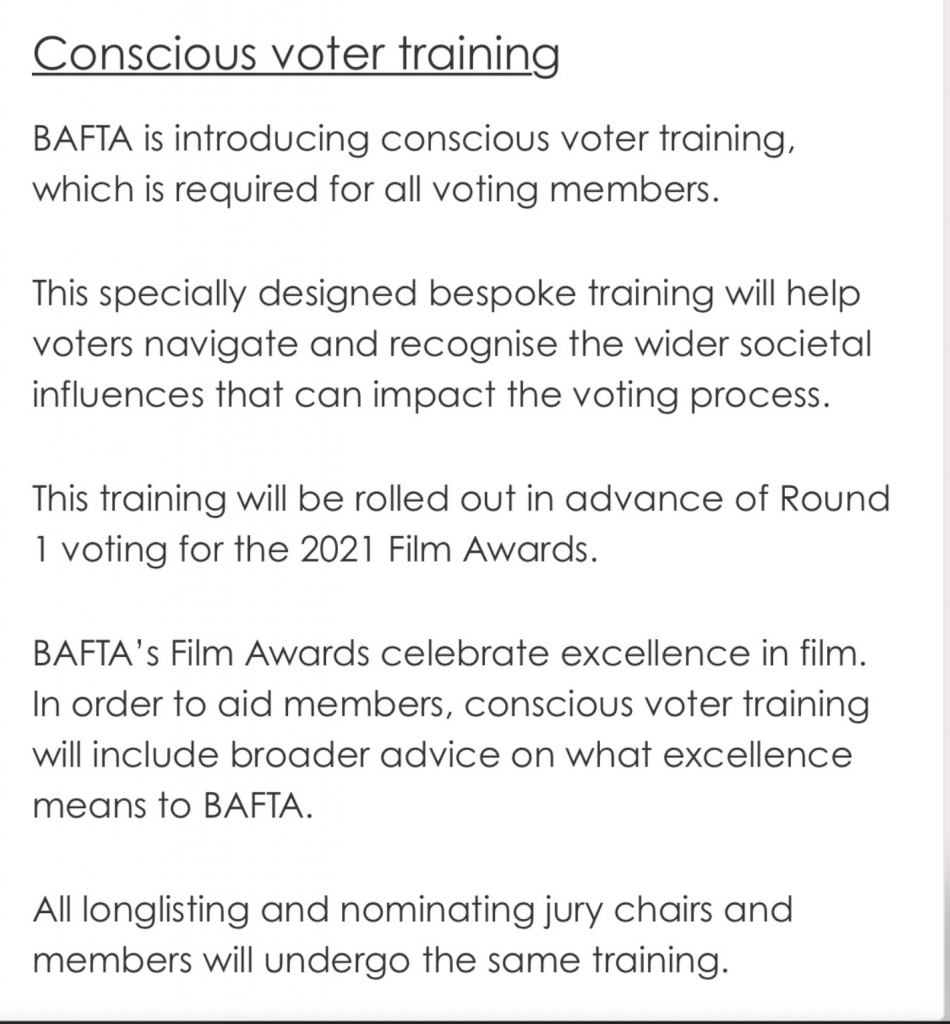 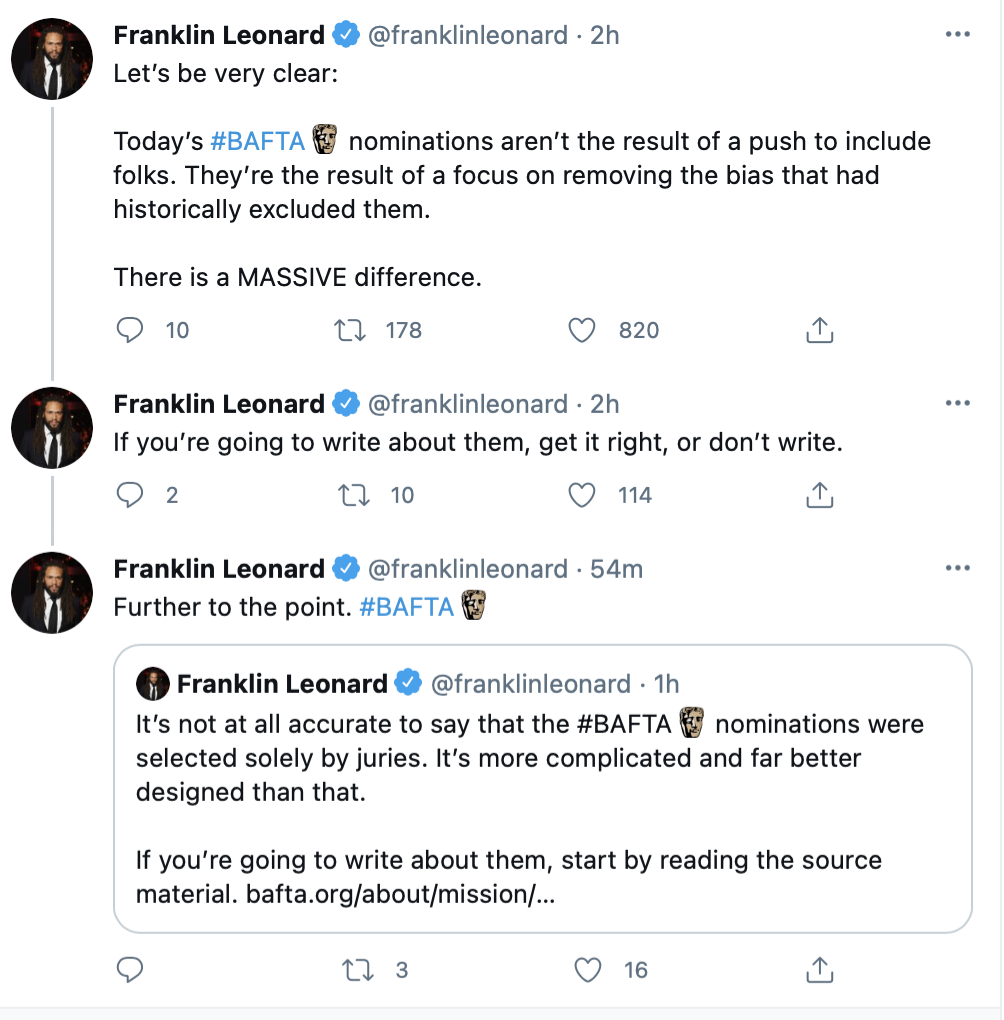 The problem is that it’s a competition to find what the industry believes is best. Competing for “best” is the whole point of the awards. If you take that out of it why have awards at all? Not to mention the obvious truth that people often look for themselves in films they choose – they are moved by stories that resonate with them and that they understand. Because the majority of voters, and in the US the population of the country, are white it would make sense that they choose stories that reflect their experience. [Worth noting that the UK is roughly 92% white, 4% Asian, and 2% Black.]

Of course, it isn’t and has never been fair that these have been the only offerings and that people who aren’t white or male have had to suck it up with what Hollywood served up. But at the same time, you can’t change the bias without changing the people who vote on the awards, to bring more of a perspective in rather than say: we can’t trust our own voters and they have to be “taught” what films to choose.

The Good – The aren’t going to get a single person calling them racists this morning, as happened last year. People who would have no chance of breaking through this year’s awards race get a spotlight shined on their work while the prominent players in the race sit it out. The BAFTA, like the critics, can feel like they’re doing a good deed by lifting up women and people of color in order to work towards redemption in an industry that has been very angry with them. Call it an image makeover for BAFTA. I can’t say how these nominees would feel being singled out in this fashion, but I hope that, at the very least, it means people will watch their movies. At the end of the day they can say they are BAFTA nominees.

The Bad – The Oscar race boosts careers because people mount campaigns to advance in the race. That means even when the well-meaning juries at BAFTA picked films on the fringe of the traditional awards race, there is no time to mount a campaign for them so that they can compete with the other movies for nominations.

The Ugly – They have essentially removed the whole point of having BAFTA awards, which are supposed to be peer selected by the industry, not curated by a small jury to make them look good. Why not simply hand out awards rather than pretend it’s a contest? They chose not to highlight outstanding women of color who actually have a chance of getting into the Oscars — in films such as Judas and the Black Messiah, One Night in Miami, or Ma Rainey’s Black Bottom. But they aren’t here to fill up the Oscar race, or even to influence it, so perhaps it’s unfair to criticize them for this, but still.  I feel it is unfair to the nominees to make this point, but in terms of building power for some of these contenders, the BAFTA sort of elected out of doing that.

The way to judge the BAFTA nominations in terms of this site, and these awards, is to look at everything that wasn’t decided by a jury. And to that end, I saw a few things worth nothing, like Another Round, The Mauritanian and The Father getting a bit of a boost. These films made the list for the non-jury selections:

Please note that all five of their films here — save for Chloe Zhao — are directed by white directors with mostly white casts, which tells you that they would have likely been headed for disaster had they not intervened elsewhere with a jury.  That’s what happened at the Globes – though I doubt the BAFTA will get hit with the same accusation. Also, this tells us that either The Father or The Mauritanian might get into the Oscars for Best Picture.

It also tells us that Mank and Minari did not make the cut here, which means that they aren’t overall as strong with BAFTA voters.

Promising Young Woman, The Father, The Mauritanian also got in for Best British Film.

In short, the race is STILL down to Nomadland with only Chicago 7 to challenge, with Promising Young Woman and Minari coming up strong on the outside.

Again, a boost for Another Round and Rocks gets in without the aid of a jury. That matters, I’d say. It makes me want to watch the movie, which I would have done anyway if it had made this spot. I haven’t done a direct comparison for Screenplay but it’s a pretty good indicator of overall strength. I would seriously consider Another Round here to slide in somewhere.

An interesting non-jury group here, with misses like Ma Rainey’s Black Bottom, News of the World, One Night in Miami. Only Nomadland shines through, and The Father, The Mauritanian again.

So this is how BAFTA counts the nominees overall:

It’s a hot mess, friends. I don’t know how else to say it.