The State of the Race — Riders on the (Perfect) Storm

by Sasha Stone
in BEST PICTURE, featured, News, The State of the Race
97

Probably to anyone who pays attention to the ins and outs of the Oscar game at all would recognize this year’s slate as remarkably diverse — unimaginably so. There are films by women, films by women of color, films by directors of color, stories about women and people of color. We’ve come a long way in the last decade or so, but much of this is not by accident. It has been brought through activism and mobilization efforts across the board. It isn’t just because of the #OscarsSoWhite hashtag revolution (though that was certainly part of it), but it’s a top down, institution-based change that has put in place efforts to recognize and prioritize historically marginalized talent.

Long story short, it took a village. But we would be remiss if we did not briefly flash back to 2018 when Frances McDormand dropped the phrase “inclusion rider” into her acceptance speech at the Oscars.

“I have two words to leave with you tonight, ladies and gentlemen: inclusion rider.”

No one really knew what she was talking about, but the press was buzzing about it. It became one of the most searched words on Merriam-Webster, so they helpfully explained: 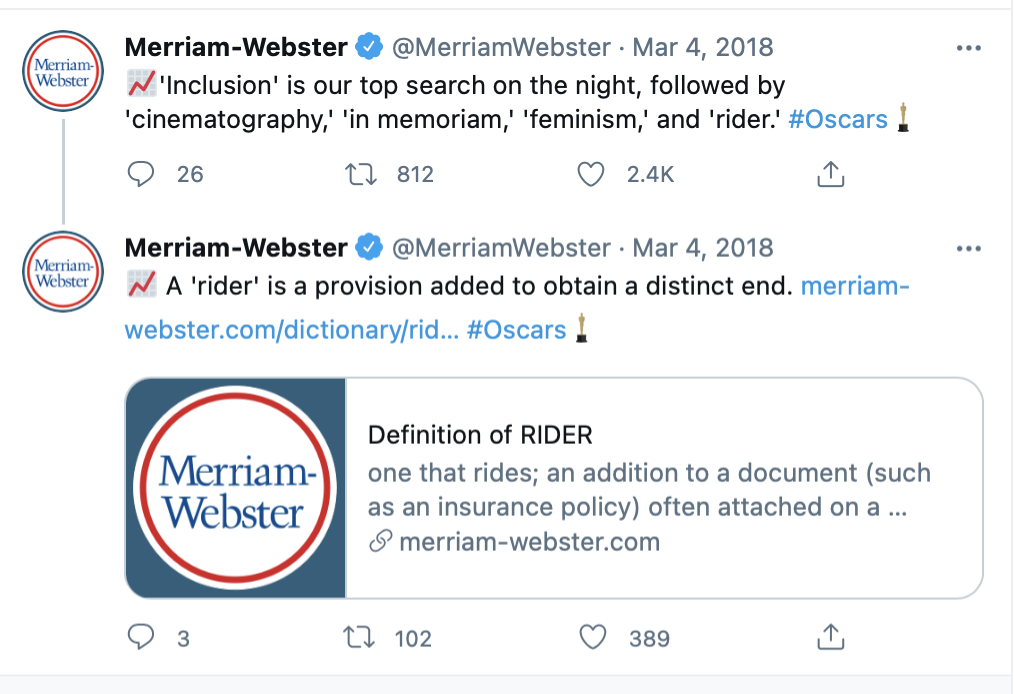 NPR explains it this way:

Simply put: It’s a stipulation that actors and actresses can ask (or demand) to have inserted into their contracts, which would require a certain level of diversity among a film’s cast and crew.

In the below video, McDormand explains how she never knew this was an option when signing onto a film and was now advising other actors to do the same. She said it at the end of 2018. Now, here we are in 2021 and we’re seeing the fruits of the activism in films heading into the Oscar race, with Nomadland about to make history.

(It just happened to be a strange coincidence that Chloe Zhao also directed a movie called The Rider and McDormand made some waves with “inclusion rider.” But they obviously are completely unrelated except in the way that the policy would “ride” on the contract.” One’s brain will always make the connection, even if there is no real point to it.)

McDormand’s pledge really did help inspire change in how films get made in Hollywood, along with other movements that have been pushing for inclusion across-the-board, in all areas of filmmaking production. There was so much momentum for change that it’s taken us to where we are now: quite easily the most diverse and inclusive Oscars in their 93-year history.

Once you remove market considerations, there are no limits in how you can cast films or what they have to be about, or what films win Oscars. When the market is involved you have something like Justice League dropping on HBO Max at the exact same time the Oscar race is unfolding. Justice League is four hours long and has an audience score of 96%, with over 25,000 views. It’s hard not to look at this and juxtapose it with Nomadland, which is the frontrunner to win Best Picture. Some might ask, “Best Picture in what universe?” Well, in the universe that is the people who vote on the Oscars.

Right away you see there are more actual reviews than user reviews, the opposite of Justice League. There is no doubt we are dealing in two completely different universes here.

But that doesn’t mean the Oscars aren’t still influential, or that they can’t make or break careers. They just don’t really churn through the public the way, say, superhero movies do. The bad news is that there probably isn’t getting around what kinds of movies the public wants. They want big budget, big stars. By contrast, the Oscars are very much about the smaller character dramas where actors can showcase their craft, not to mention their activism.

But attention by the awards race has led to bigger things for filmmakers who aren’t just your average young white male wunderkind. Chloe Zhao’s next movie is a massive big budget superhero movie called Eternals, described this way, “Following the events of Avengers: Endgame (2019), an unexpected tragedy forces the Eternals, ancient aliens who have been living on Earth in secret for thousands of years, out of the shadows to reunite against mankind’s most ancient enemy, the Deviants.”

Promising Young Woman’s Emerald Fennell has also been scooped up to direct a movie about Zatanna Zatara, described as “a powerful Homo Magi. She is the daughter of John Zatara, and like him casts spells by saying what she wants backwards.”

The idea is that it all could theoretically start with an inclusion rider which then opens the door to women and people of color who would then have more opportunities available to them. Being nominated for or winning an Oscar surely amounts to more power to do that. Voters are no longer obligated to consider what the public likes because the market no longer matters where the Oscar race is concerned.

So the Best Picture race appears to be settled. Nomadland has received an unprecedented amount of support from the critics and now, from the industry. This will hold true whether the general public finds their way to it or not. Who knows, maybe some of those who fall in love with the Eternals might want to look at Zhao’s early work like The Rider and Nomadland, just as Ryan Coogler fans might one day find their way back to Fruitvale Station.

So the only question remaining is how many Oscars can it win? AwardsWatch’s Erik Anderson theorized on Twitter that it might be that rare sweep that finally wins all of the Oscars it was nominated for, a feat not achieved since 2003’s Return of the King. Slumdog Millionaire came close. That would mean it wins:

That would give it as many wins as The Hurt Locker, which won six Oscars. In the era of the expanded Best Picture fields, films do not sweep. That’s because each of the Best Picture contenders is someone’s favorite movie. They seem to be inclined to vote for their favorite movie to “win something.” Some movies do go in with 10 nominations and come out with zero wins, like True Grit American Hustle, and The Irishman, but it’s rare. Let’s take a quick look at how Best Picture is linked to other categories: 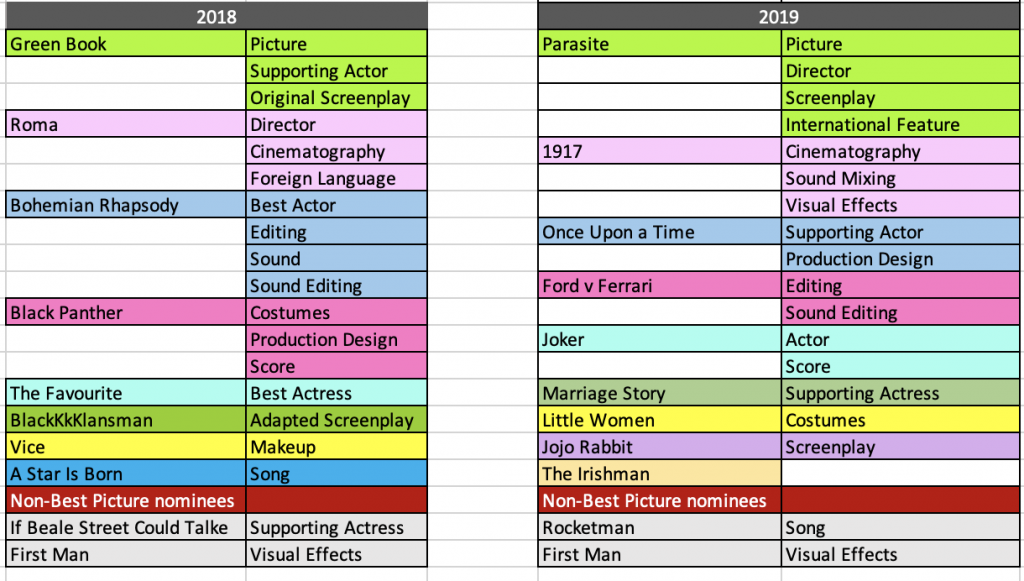 The two Best Picture winners that have won the most Oscars have been The Hurt Locker and The Artist. That would seem to indicate that winners voters are passionate about, as they were with these two films, tend to win more Oscars.

The only Oscars Nomadland might not win would be Best Actress, Cinematography, and Editing. Picture, Director, Adapted Screenplay all seem set.

Nomadland’s main competition is, of course, Mank — which has breathtaking, unforgettable cinematography. But we know that the Oscars don’t vote for “best” most of the time. They really don’t. If they had, Roger Deakins surely would have won multiple Oscars before he finally won for Blade Runner 2049.

Cinematography often goes to favorite in the Best Picture category. Crafts-heavy films that almost won Best Picture but didn’t picked up Cinematography as a consolation, in the expanded era especially: Hugo, Gravity, La La Land, Life of Pi, Inception, and of course last year’s 1917. In fact, where there is a split vote, the Best Director winner can often go with Cinematography while Best Picture goes with Screenplay. That likely won’t happen this year, but Mank’s 10 nominations and the way it looks overall seems to indicate it will give Nomadland some competition. But then again, Nomadland is shot by Chloe Zhao’s life partner and collaborator, so it would make sense if voters feel it is inextricable from Best Picture.

Editing is another strange thing because in general people who direct films and edit them don’t usually win in Editing. The Coen brothers never won, for instance. But it does happen. Jim Cameron won for editing Titanic, and Alfonso Cuaron won for co-editing Gravity and also won Best Director. The rarity of Chloe Zhao being female might lead voters to choose her out of pure love for the rarity of it and for the film. I see the main competition here as Sound of Metal, which will also have many fans and might also win Best Sound. Last year’s Ford v. Ferrari won both of those awards.

Finally, Best Actress going to Frances McDormand is a probably the longest shot. That’s because Carey Mulligan is the frontrunner in an incredibly popular film. They’re going to have to like Nomadland better — much better — to deny Mulligan the prize. Right behind her would be Andra Day, who would make history as the first Black actress since Halle Berry to win, ditto Viola Davis. It is possible, but, to my mind, not likely.

However, I don’t think predicting a clean sweep is a bad call. It might happen, particularly since the desire to see Chloe Zhao win is evident in how people have been voting for the film for a solid year, with no signs of it slowing down. McDormand, of course, is the only Oscar-nominated Best Actress contender competing at the BAFTAs — but are they really going to have gone through all of that only to give their top prize to the one of the only two white actress? Hm.

McDormand will win as one of the film’s producers and hopefully she’ll take a moment to reflect on her speech in 2018, her introduction to the “inclusion rider” and how far the Oscars have come even since then.

Either way, Nomadland and Zhao are on track to walk home with a good amount of hardware, and with the Eternals on deck, Zhao could emerge as a prominent director in Hollywood.