It might be hard for today’s young people to really understand just what a big deal the war protests were in the late 60s and early 70s to push for Richard Nixon to end the war in Vietnam. They were willing to die for it and some of them did. While the public did not approve of their actions and condemned them, siding instead with the Nixon administration’s “law and order” clampdown (including the shooting at Kent State which left four dead students and a public that sided with law enforcement), their protests eventually ended the war.

They were a motley crew of radicals, no doubt about it, at a time not all that different from now. There is opposition to authority everywhere in America, on every side – eventually the whole thing blew up and handed power to the conservatives for the foreseeable future (many of the hippies grew up and wanted to live in houses and pensions and families so some abandoned their activism).  Writer/Director Aaron Sorkin makes this point emphatically in the film, that the ultimate goal has to always be in mind – and that violence can sometimes work against the cause at hand.

Some will argue that the protesters scared the public and only made Nixon double down on winning an unwinnable war, but there is no doubt that the ongoing, sustained pressure shifted public opinion and finally the war did end. Who knows how long it would have gone, who knows how many more left dead if they hadn’t used everything in their power to stop it.

Now, Aaron Sorkin joins activists to discuss how to use one’s voice for change. While this isn’t news to Gen-Z after this past year – they need no one to tell them the power they have – but they should always remember the lessons from history. History has a way of repeating itself and if you watch The Trial of the Chicago 7 you will hear those lessons. 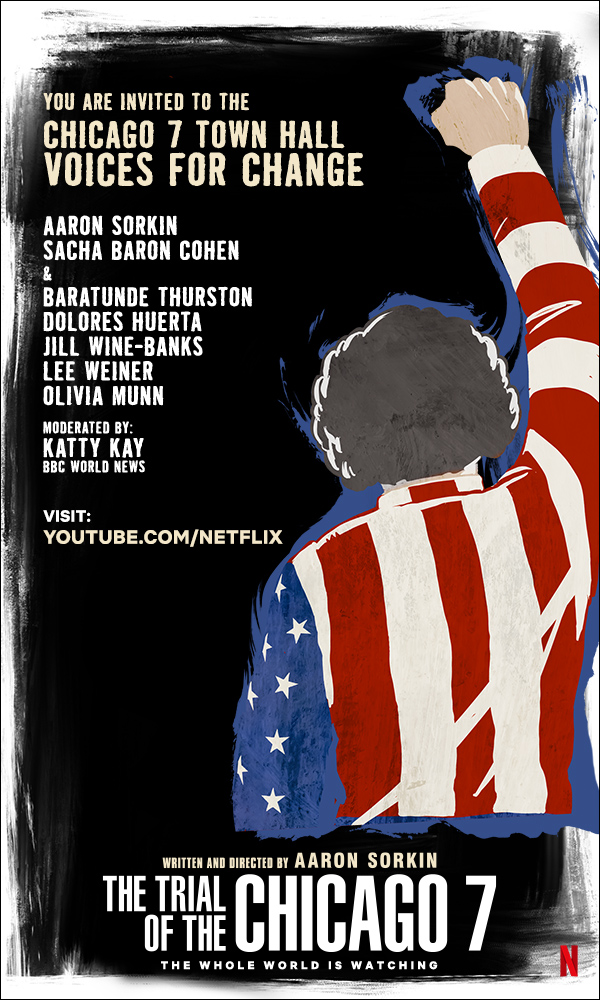 Tags: Trial of the Chicago 7