How to Save the Oscars – Revisiting the “Popular” Film Category

a Humble Suggestion for the Academy

A few weeks ago I asked my good friend Michael Grei whether he’d seen Minari. He said he was going to watch it but first he had to sit down and watch four hours of the Justice League Snyder Cut. Being someone who very much exists inside the bubble of the Oscar race I had not even heard of, nor spent any time contemplating, a four hour superhero movie. After he’d seen it I asked him, was it good? He said, yes, it was not just good – it was great. Everyone my daughter knew had also seen it. If you look on Rotten Tomatoes user reviews you will find almost three times as many reviews for that movie as all of the Oscar contenders combined.

I am not making the case that Justice League is “Oscar worthy,” but I am going to introduce the notion that it is really long past time for the Oscars to start at least considering the kinds of movies people are talking about, watching, buzzing about and paying to see.

The Oscars, I think, are caught in a bit of a time warp. For most of their history they mirrored back the culture of the country and the film industry. They didn’t capture all of what was happening in the country because movies have always been “entertainment” and “art.” But the Oscars haven’t been exclusively only one or the other. They have been a mixture of both.

One of the problems with the Oscars now is the preferential ballot. The reason it’s a problem is that it can’t ever properly assess a most popular or most loved movie. It has to measure most liked and least hated – a common denominator that sometimes factors out to “good enough.” You will never get back to what the Oscars used to be with five nominees because those movies of yesteryear became giants in Oscar history and most have been remembered because they were voted on by a consensus. It wasn’t a ranked vote or a modulated vote – but a full-throated passionate vote for a movie people really loved. It isn’t like that anymore and everyone knows it. It does serve the purposes of the Academy’s desire to be more inclusive for sure – but it also makes “Best Picture” limited in terms of what kinds of films can win and whether any film can ever sweep again. Those big powerful Oscar contenders appear to be a thing of the past.

The reason no one does anything about it is that the Oscars mostly serve those who micromanage them – people like the film critics, publicists and Film Twitter. We carefully select movies that have been mostly grown as hothouse flowers rather than robust weeds that have survived despite all odds. Movies that land in the Oscar race are, to a certain degree – with a few notable exceptions – movies whose place has already been carved out very early in the year. The movie then just has to live up to, or disappoint, expectations. The cart has long since been put before the horse.

When superhero movies began flourishing, when tentpoles started to balloon, the Oscars went into the bunker. They decided to cut off from the mainstream fare because it was just too humiliating to take movies with actors in tights seriously. Actors dominate the Academy and they would prefer to actually be able to act in character dramas rather than fulfill some sort of extended adolescent fantasy. It did seem like a fad – but now it doesn’t. Now, I think, ignoring those movies, ignoring the blockbusters isn’t killing Hollywood but it is killing the Oscars.

This year I have had a consistent stream of people, some young, some old, some on the left, some on the right tell me that they do not watch the Oscars anymore. They’ve become too political is one of the main complaints; the movies are too obscure is another. And some have lamented that they don’t think the voting is about whether the films are actually good or not but something else – satisfying a need to reach gender parity, for instance.

There is no need for the Oscars to evolve if they don’t want to. They could easily find a home on streaming and never have to worry about ratings every again. They could continue to exist in an insulated bubble that still remembers the old world, how movies used to be before they were swallowed up by green screens and mega corporations making billions upon billions.

There is something else to notice, however. And that is China is getting close to not needing American film exports anymore, which is astonishing. They could end up dominating the worldwide box office market in due xourse. For instance, look at China’s annual box office in 2015: 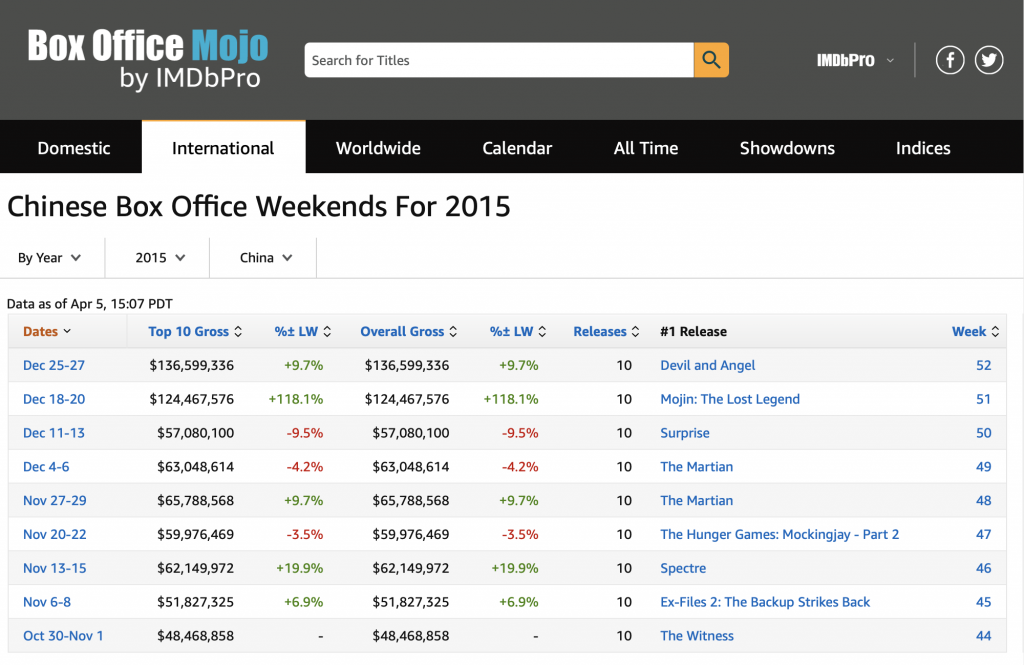 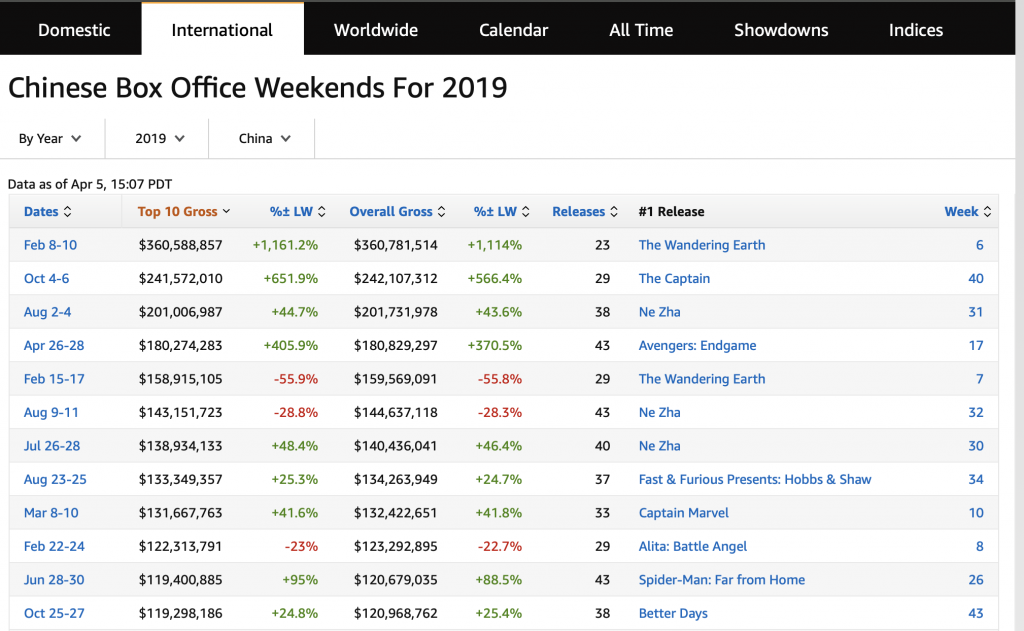 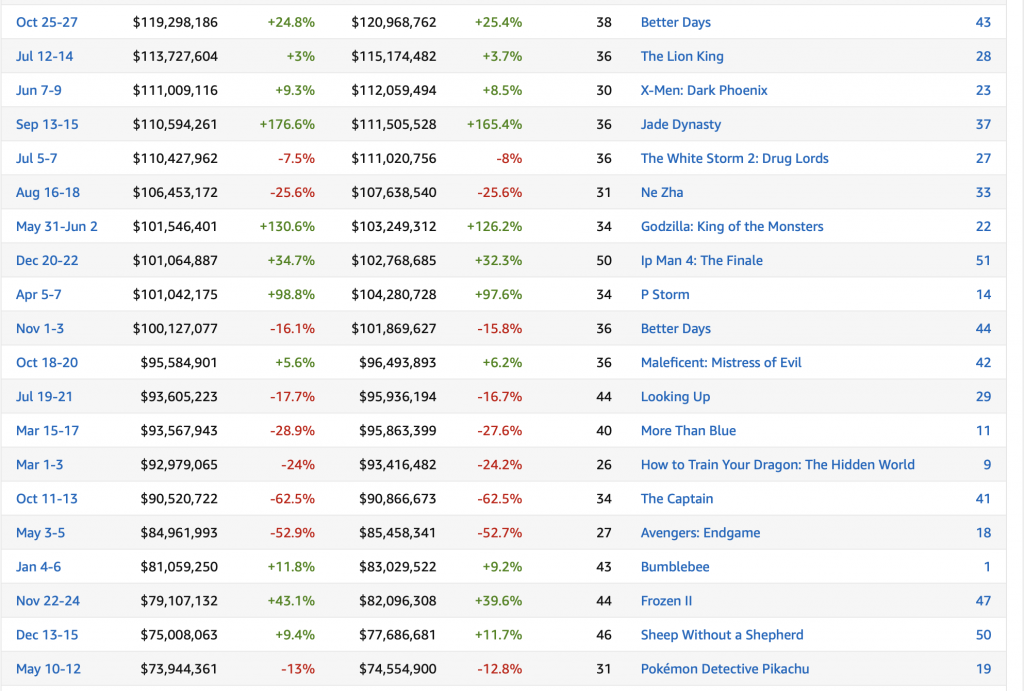 And look at their smash hit Better Days which is up for International Feature: 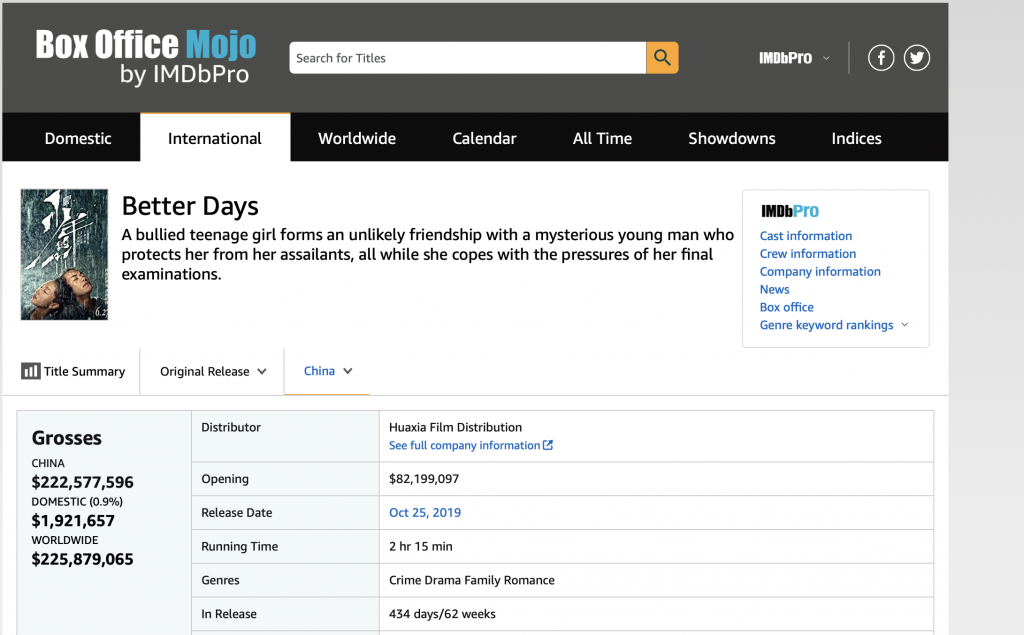 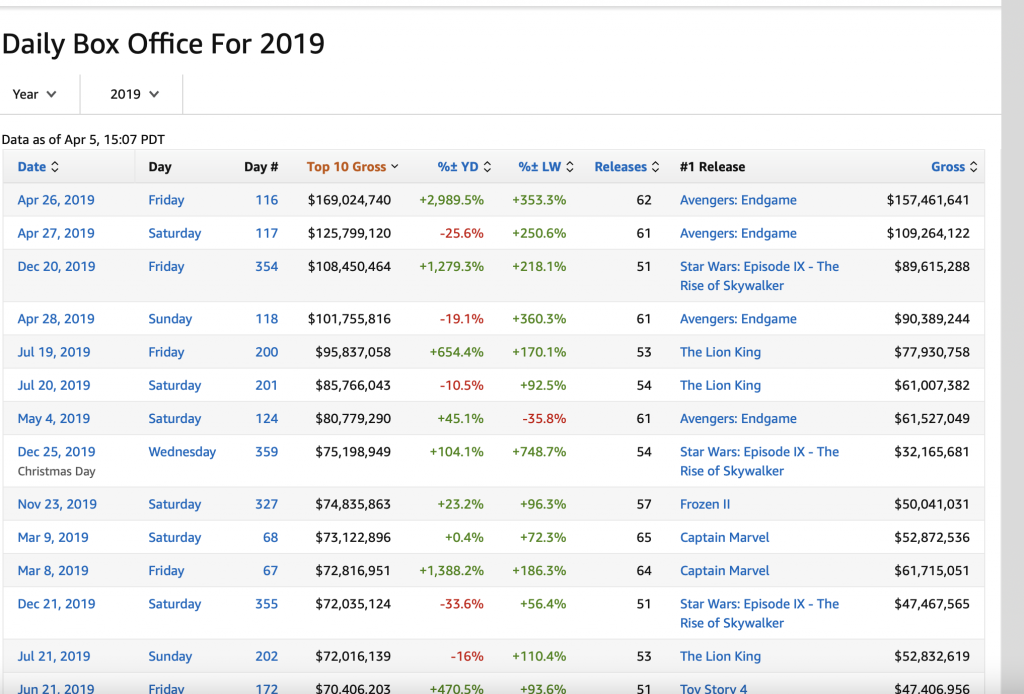 Now look at China’s box office for this year so far: 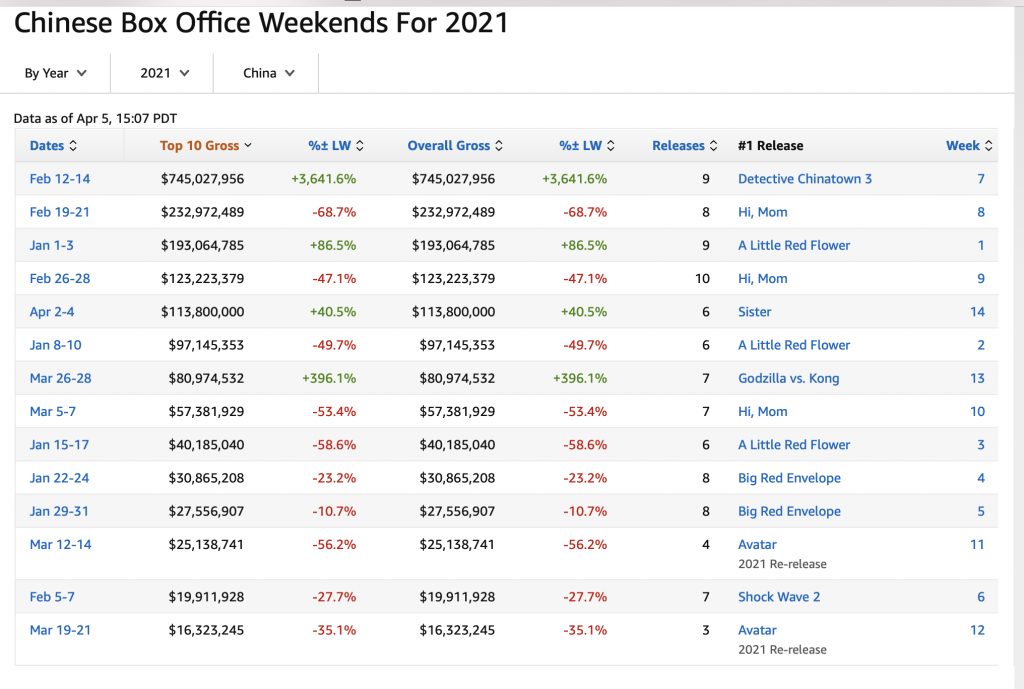 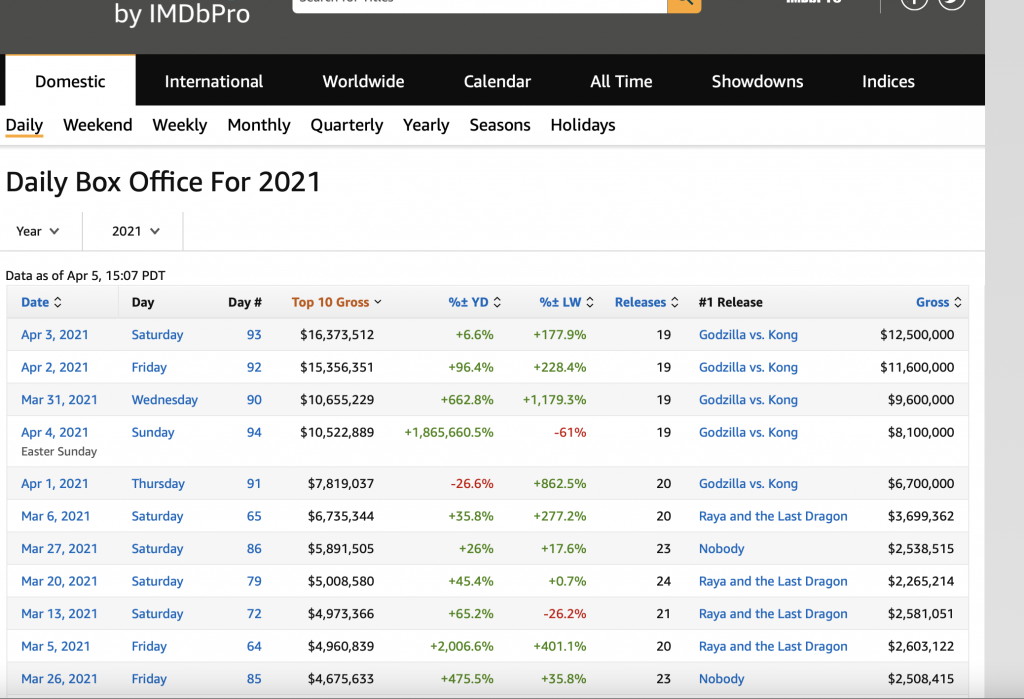 Obviously China handled the pandemic better than we did – they did not mess around, that’s for sure. Granted, their government allows for complete authority over what people do, where they go, how they’re tracked, but man they got back on their feet in a hurry.

I am not in the business of Hollywood production companies but they have to be at least contemplating China’s independent success. This shows that the US is no longer the dominant export when it comes to movies – unless you count all of the other countries combined and then, for sure, the US is the champion. But China, and South Korea and India, are all developing their own industries, their own movies and making a lot of money doing that.

Better Days is a film that was good enough to be nominated for International Feature and it made a shit ton of money in China.  What I’m wondering is – can Hollywood push itself back to being a dominant force by the Oscars expanding outward to break out of the insulated bubble they’ve found themselves in? In other words, cut off from not just the world but the country itself?

The Oscars can have their same Best Picture lineup with a preferential ballot for the actors to continue to reward projects that showcase them. AND they can have a popular film category where the crowdpleaser films that make money – whether domestically or internationally – can compete.

My suggestion would be: each nominee would meet a baseline of having earned $100 million or the equivalent in views on streaming. If they did that, the films of the 2019 that would be considered would have included 1917, for instance, which could have won in the “popular” film category where Parasite won in Best Picture. Jordan Peele’s Us could be included. Ford v Ferrari and Hustlers. For 2020, Bad Boys for Life, which won Best Picture at the NAACP Image Awards could be considered and nominated.

Why does this have to be a bad thing? A five picture ballot could be a majority vote. It could include the public because the public will have seen the films. Everybody wins.

Now, here is what the Academy has to know in implementing this plan.

I think this is a potential fix for a problem that I believe is only going to get worse. Then again, maybe after 100 years the Oscars are coming to a close and they might just want to live out their retirement in the sanctuary of streaming. Trust me, I can relate.

My Octopus Teacher - Hope in a Sea of Darkness