What Do the Oscars Mean to You?

I was not one of those kids who stayed up late with my parents to watch the Oscars. My way in wasn’t about the Oscars themselves. Back in the 1980s I worked at a video store called Main Street Video. If you know Santa Monica you’ll recall there is a mini mall across from Rocknwagner? That is where Main Street Video used to be. We thought we were the cutting edge of technology. We thought we were putting movie theaters out of business. But the one thing we definitely were was a kind of local hangout, a pub, a coffee house or a bar where the common obsession that drew all of together was a love for movies. The staff who worked there mostly only worked there because they loved movies. Sure, a few people just needed the job but for me and my boss at the time, Michael Grei (sometime guest on our podcasts), it was all about the movies.

Someone would walk in and always ask “what’s good?” People still ask me that when they find out I “work” in movies, (like being “in sharks”). I write about movies and that somehow means I would know what is good. Working in a video store meant we had to size people up to imagine what it might be they were looking for. The next question would then have to be, “define good.”

My boss Michael is the reason I even began thinking about the Oscars. I’d been dabbling with acting and had inflated hopes of maybe getting into film somehow, so the Oscars were a vague goal to shoot for on down the road, which usually meant – in my 20-something brain – a way to say “I made it. I am validated. Everyone must now say I am worth something.”

But Michael – he was different. He just loved the Oscars. He loved them so much he knew every tiny detail about them. He knew who won what in a given year. He knew who had so many nominations and never won anything. He loved movies and because he loved movies he loved the Oscars. To him, they were a way to honor the movies and the performances he loved. Michael is one of four brothers who grew up in California. His personal story is not mine to tell so I won’t tell it here but if you knew him then and you knew him now you would see that one of the things that has never left the mind and heart of Michael Grei has been the Oscars.

I didn’t seriously consider them until I found myself in 1994 in a usenet group about movies. By 1998, I was pregnant and about to give birth to a baby on May 25th of that year. But this is the exact moment I became interested in the Oscars. Here is the thread and here is the moment. 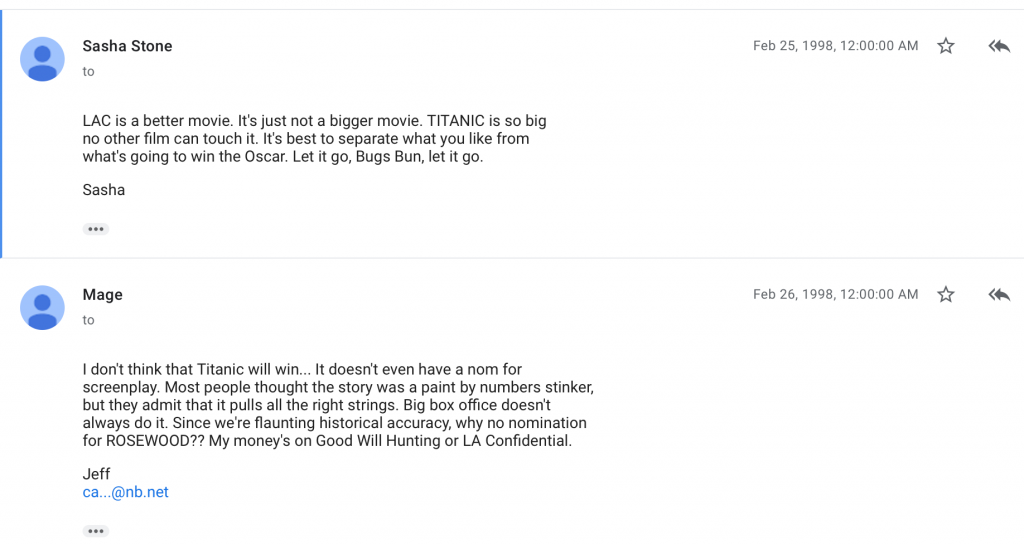 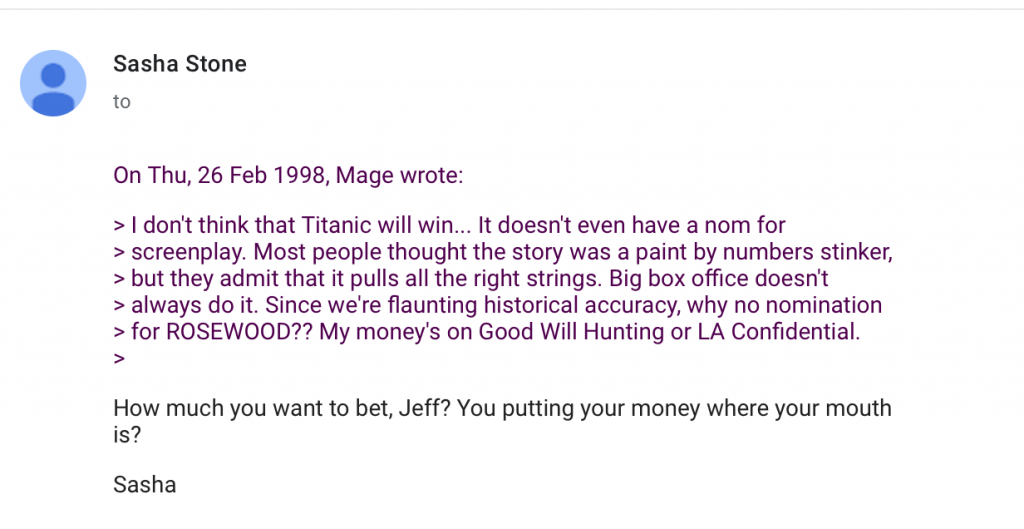 That was it, really. 23 years ago where the spark of an idea was born.

I wasn’t the only person in that group that knew Titanic would win but the difference between those two movies, and the perception of the differences between them – with L.A. Confidential being the critical darling and Titanic being the movie for the masses and why Titanic WOULD win is what sparked my interest, and would prompt me a year or so later to start Oscarwatch.com. It was a quest at first to figure out why some movies won and others didn’t. But more importantly, why some movies were so highly regarded and still were not named Best Picture.

I would ask these questions for the 20 years that followed, though I know that my intent was to shift perception away from popular entertainment like Titanic towards critically acclaimed movies like L.A. Confidential. Now, in 2021, I do not think Titanic could win Best Picture without a fight. By the time it even got to the Oscars it would have been dissected, pulled apart, analyzed to make sure it is the “right” winner.  Perception has changed but it has been completely transformed where the Oscars are concerned.

What the Oscars used to mean to me: a high and impossible mountain to climb. What they mean to me now – I’ve climbed the mountain and can see everything below and what I see worries me. I worry that my site has played a part in ruining the Oscars. Where they were once an organic, unpredictable event based not on what people like me write about but what people felt when they watched the movies themselves. In 1998, it was February – the Oscars would not be until March 23rd. That meant there was enough lag time for the analysis to take place. Since they happen so quickly now, over by the end of February, the analysis has to come earlier, much much earlier.

I worry that they have lost their relevance to the broader public, that the pomp and circumstance, however tacky people think it is, has vanished. I worry that it is no longer about the movies but a struggle session to define and redefine the fast evolving cultural Left. I worry that they see themselves and their choices as council and direction to “fix” society rather than entertain it. I worry that there are too many people micromanaging it such that a movie that people think is good can’t be taken seriously because it isn’t an “Oscar movie.”

My friend Michael has told me he isn’t a fan of how the Oscars have changed. He thinks they have lost some of their luster because they’re “drowning in politics.” Once I started getting invited to the actual ceremony itself, becoming part of the pomp and circumstance I used to only write about, I could see really what the Academy is and how many of those who are in it and who vote are really given an extraordinary amount of privilege – they who ride in first class with their specialty meals. They have earned their place and they can pick whatever movies they want. It is almost always a fun night with drinks flowing and high heels stepping on long, chiffon dresses. I usually sit way up high, next to people who have brought their short film from far flung countries. To them it is a high honor just to be nominated.

What do the Oscars mean to me now? They’re still a game of who can be most right. They are, more than they have ever been, a utopian diorama where a select group of people decide what really should define the industry moving forward, at least ideologically. These would be the people who decide what goes on the salads that McDonald’s sells alongside its Big Mac. Are the salads good? Could they be better? Should they be vegan and organic? Should they be room temperature? If they produce the perfect salad, does that mean people will buy it and actually eat it? Or does it just give McDonald’s the stamp of class and dignity amid waste and ruination? These are the questions that have replaced “why do the best movies never win.”

What the Oscars mean to me is wrapped up in general with everything else I think about the world, how my perspective has shifted over time, and what I see as the most important things to think about. At the end of the day, it is a living. It is a job that I’m lucky to have. I built a business as a single mom with a baby living in a one room guest house in Van Nuys, California in 1999. I had a modem and a computer and a head full of ideas. The internet was wide open and anyone could do anything. What would the Oscars be now if I had never done that? I don’t know. My daughter is 22 and living in New York. And somehow, this site, after two lawsuits, lots of new people coming and going, lots of friends and enemies made, lots of opportunities and far too much success than anyone like me deserved, has somehow scrabbled through one more year.

So tell me, Oscarwatchers, what do the Oscars mean to you?