The Case for… Glenn Close

"I'm Not Going To Be Ignored!"

I am going to prosecute an argument as to why the Academy of Motion Picture Arts & Sciences should and will present their Best Supporting Actress prize to Glenn Close for ‘Hillbilly Elegy’.  So much has been written about this movie and the source material and the performances; and as a disclaimer, upon seeing the movie for the first time, I did not think Glenn was deserving of the highest honour in the industry. But as this season has been longer than my career (I’ve shamelessly ‘borrowed’ that line from Shirley MacLaine when she accepted her Oscar in 1984 for ‘Terms of Endearment’), I have revisited ‘Hillbilly Elegy’ and also considered the 5 women that are nominated this year for Best Supporting Actress. I’m now prepared to strongly advocate for AMPAS to give this amazing actor her overdue Statuette, after nearly 40 years of unforgettable performances, and 7 previously unrewarded nominations.

Something of a late starter to acting, with her theatre debut at 27, Glenn Close got her big screen introduction in her mid 30’s when she was cast as ‘Jenny Fields’, a stridently iconic feminist and loving mother to T.S. Garp in George Roy Hill’s 1982 feature ‘The World According To Garp.’ Glenn Close earned her first Academy Award nomination in Supporting Actress for the role and she followed that up immediately with another in ‘The Big Chill’ where the actress gives a truly moving turn as a wife who asks her husband played by Kevin Kline to have sex with her best friend (the inimitable Mary Kay Place) in order for her to have a child. The look of love that Glenn Close radiates as she juggles her feelings for her husband and her best friend, gave the movie its heart. director Lawrence Kasdan wrote the character with Ms Close in mind. Glenn would make it three nominations in three years when 1984’s ‘The Natural’ from director Barry Levinson was recognised, despite her role being small.

The 1980’s would continue to be a halcyon decade for the actress, with varied films such as the family drama ‘The Stone Boy’, the legal thriller ‘The Jagged Edge’ and the fantasy comedy ‘Maxie’. But the two roles that perhaps most define the incredible career of Glenn Close came in 1987 with ‘Fatal Attraction’ and the following year with ‘Dangerous Liaisons’. The former was a thriller of the most epic proportions and the actress was eerily good as the obsessive psychopath. The latter was no less intense, but a period drama set in the 18th Century and a revenge motif if ever there was one! These two performances, aside from establishing what a kick ass screen siren she could be, also earned Glenn Close her 4th and 5th nominations, graduating to Best Leading Actress. ‘Fatal Attraction’ was the highest grossing movie, worldwide, of 1987 and earned 6 Oscar nods. ‘Dangerous Liaisons’ was a box office success and named in 7 categories; and so Glenn Close had now been nominated 5 times in her first decade on screen, and was in 3 films that were up for Best Picture. As her infamous ‘Fatal Attraction’ character creepily uttered: ‘I’m Not Going To Be Ignored’. Indeed….

The 1990’s saw Ms Close appear in 15 movies; perhaps the most memorable ones being ‘Reversal Of Fortune’ where she played comatose Sunny Von Bulow opposite the eventual Oscar winner Jeremy Irons, the Ron Howard Directed ‘The Paper’, the Australian prisoner of war saga ‘Paradise Road’, the Hungarian located ‘Meeting Venus’ and the truly ensemble international drama ‘The House of The Spirits.’ That last one also featured one Meryl Streep, with whom Glenn would compete on three occasions for the Academy Award, the most recently in 2011 when Meryl finally earned her 3rd Oscar. Glenn was still sans Academy Award.

Sadly in the 1990’s and 2000’s actresses ‘of a certain age’ struggled to get leading roles, so Glenn Close showed up in supremely delicious comic form in ‘101 Dalmations’ earning her a Golden Globe nomination and a sequel several years later – the creatively titled ‘102 Dalmations’. The actress continued to work in the ’00’s but it was her passion project ‘Albert Nobbs’ that occupied her creatively for a decade, and nearly 30 years after playing the character on stage. Critically not an overwhelming success, the film still managed a trio of Academy Award nominations including the 6th for Glenn, but it was the ‘Iron Lady’ who would walk away with Oscar, not ‘Albert Nobbs’.

If a painter must paint, and a writer must write, then an actor must act, and thankfully between her stage career and the lure of some top notch television projects, Glenn Close continued to display great potency and earn praise and prizes in so doing. But Oscar eluded her. Cut to 2018 and ‘The Wife’, a role tailor-made for a performer with the intensity and intelligence that this actor brings to her work. Paired with Jonathan Pryce, Glenn is a powerhouse of seething emotion and delivers yet another awards-worthy performance, and indeed winning her the Golden Globe, the Screen Actors’ Guild, and The Critics’ Choice’ among the haul she collected. It looked as if finally, the Academy Award was heading her way; until Olivia Colman was deemed ‘The Favourite’ and for a 7th time Glenn Close went home empty handed.

Why have I detailed at length the filmography of Glenn Close? Because I believe she is one of, if not the most powerhouse, versatile, and memorable actors that has ever appeared on screen, and yet she has never won an Academy Award. Does her unrewarded legacy entitle her to victory this year for ‘Hillbilly Elegy’? Many would say not. I consider her body of work extraordinary, and if it was ok for James Coburn or Jack Palance or Peggy Ashcroft or countless others who arguably received a ‘Career’ Oscar, why has this not happened for Glenn? Few actors bring such intensity and intelligence to their range of characters and genres as this performer has. Now in her 5th decade of screen roles, and as now one of the five most nominated actresses in Oscar history, it seems as if this is the right time and the right place to bestow upon her the Holy Grail of acting prizes.

Much has been written about her 7 previous losses. Beaten by Jessica Lange, Linda Hunt, Peggy Ashcroft, Cher, Jodie Foster, Meryl Streep and Olivia Colman – there are narratives for all of these great women and their films. Lange was never going to beat Streep in Lead for ‘Sophie’s Choice’ so Supporting for ‘Tootsie’ was the consolation prize after her blistering turn in ‘Frances’. Hunt gave a gender bending turn in ‘The Year Of Living Dangerously’, Ashcroft had been a screen star for half a century; Cher was….well, Cher; Foster’s comeback was a guttural and brave performance in ‘The Accused’; Meryl had waited 29 years for Oscar #3 (and yes how is that fair when Glenn has Zero?) and Olivia Colman was in a 10-time Academy nominated movie and had won both a Globe and BAFTA. Lady Gaga shared The Critics Choice with Glenn Close.

So why no Oscar for Glenn? Why has she been ignored? Perhaps the Academy has never liked Glenn Close, or just not liked her enough to convert those 7 nominations into just 1 win!

The 2021 Academy Awards is like no other. Our world has been turned upside down the last 18 months, and the creative community; especially the film industry has taken a big hit. But there are some brilliant storytellers and artists on display this year. The 8 movies nominated for Best Picture are proof positive that great cinema will always triumph and more than ever we need great cinema. And we need to recognise those that have brought us the sublime images, the resonant narratives and the eternal performances. The Supporting Actress category this year is as varied as it has ever been (although had tween Helena Zengel been included it would have been truly incredible). Maria Bakalova at just 24 and her first major screen credit is breathtaking in her courage and transformative skill. Amanda Seyfried is at the peak of her powers right now; after a dozen years of screen magic. Olivia Colman is a force of nature and one of the great contemporary actresses; and Youn Yuh-jung brings decades of vivid work and screen credits to her crucial role.

Every actor brings themselves and everything they have ever done to their next role, and these 5 women; whether they are newbies; ingenues, seasoned players or veterans, have dug deep. Glenn Close has submerged herself into ‘Mamaw’ in ‘Hillbilly Elegy’. It is not just the wig and the clothes; or the make up and the dangling cigarette; it is the walk; the drawl; the gruffness, the sadness; the regret; the wounds of her past; but her defiant spirit and motherly instincts that make this character so spellbinding on screen. This performance is electric and elevates the material and all those in her radius. Like many nominated actors and actresses, a performance can be better than the movie it is in; and this is true of Glenn’s work in ‘Hillbilly Elegy’. Glenn Close takes no prisoners in this scenery-chewing turn. Across her 40-year screen career; the actress has played it all; and there is no denying her indomitable spirit and mesmerisingly cogent screen presence.

The image of Glenn Close in 1994 handing an Honorary Oscar to Deborah Kerr; herself a six time loser of a competitive Academy Award is too ironical, if AMPAS, allows Glenn Close to be an eight time loser on April 25. 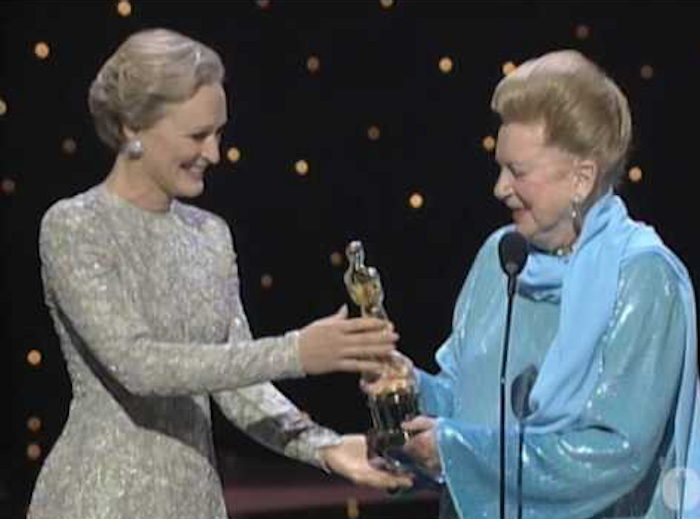 AMPAS – it is time that you recognised this American acting juggernaut and rewarded Glenn Close this year with the Academy Award for Best Supporting Actress. Don’t have buyer’s remorse and find that you have overlooked this international treasure. Remember what she said: ‘I’m Not Going To Be Ignored’…