"What we can all latch onto is the hope that this ends someday and portray the resilience of Black people who refuse to lay down and take this and accept this as an American way of being."

American audiences are used to the time loop movie. Groundhog Day set the standard so distinctly that every movie that uses the device is often called a “Groundhog Day movie.” Normally, being tugged back and forth from beginning to end has a lighthearted, comic tone to set up a pair of lovers, or it can be used to set up dramatic action set pieces. For co-directors Travon Free and director Martin Desmond Roe (Free wrote the screenplay), the time loop is used to showcase the epidemic of police violence against Black Americans. I haven’t been able to stop thinking about it since I saw it. This movie is a gut-punch and a wake up call.

(Please note that our conversation details many plot points and spoilers for Two Distant Strangers. If you haven’t seen the film yet, it is available to stream currently on Netflix. We strongly encourage you to check out the film before reading through our conversation.)

Two Distant Strangers is about a young visual artist named Carter (played by Joey Bada$$) who finds himself trapped in a loop of being killed by the same cop, Merk (played by Andrew Howard). It immediately takes the concept and gives it an emotional resonance and real-life urgency.

The trial of Derek Chauvin has been going on for almost two weeks, and it’s been surreal for both Free and Roe to campaign a film that was made in the wake of George Floyd’s murder. One of the most memorable shots of Two Distant Strangers is when we see the names of Floyd, Breonna Taylor, Freddie Gray, Eric Garner, Tamir Rice, and Michael Brown spray-painted on the roof of a building. 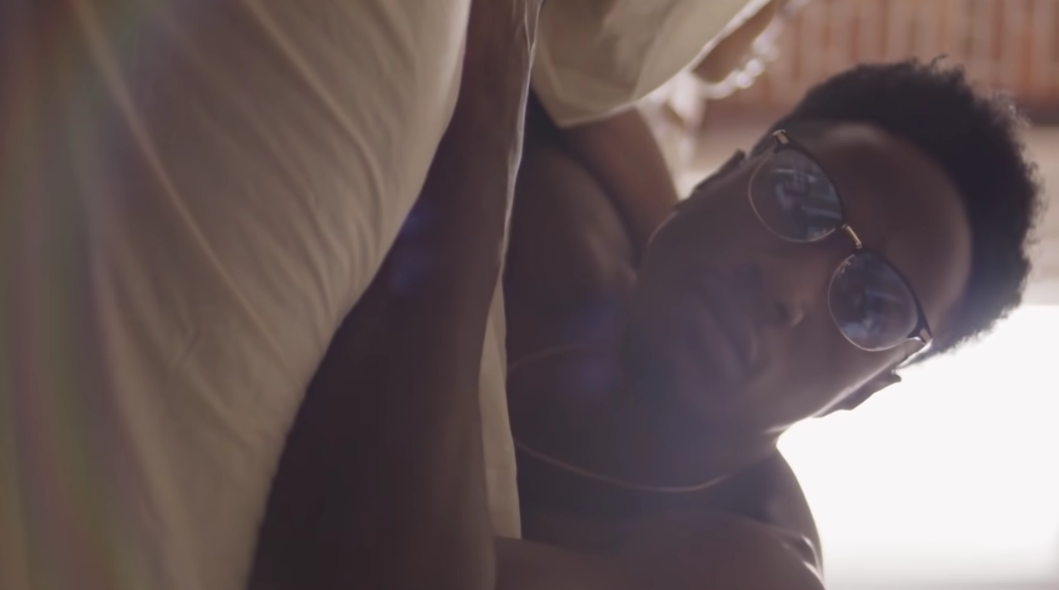 “There have been a lot of surreal moments making this movie from the start until now,” Free said at the top of our conversation. “We would have never imagined that the situation that inspired me to write the movie and inspired us to make it together would dovetail with this trial happening at the same time. I think it speaks to the power of short filmmaking. I think that short filmmaking allows you to respond to life and respond to things immediately. It’s the only way this could happen. If we decided to make a feature, we’d still be making it. Up until the trial started, people weren’t talking about it any more. Once the trial started, we started having those conversations again. It’s been very surreal to watch people’s responses while we are still living through the experience because that’s what was happening when we were making it. We were still going through what happened with George Floyd and Breonna Taylor. It is very surreal in that regard and we don’t take it lightly. The message of the film is what we want to be the end result. We want to find a way to stop Derek Chauvins from happening again.

Roe stated that in these situations, he knows he needs to listen more than speak, but he added, “I will say that my mother’s name is Karen who has gone through her life raised through the Thatcher years in England. She voted for Maggie four times, and she has so many opinions on the Derek Chauvin trial. It’s been fascinating for me to see the homegrown effects of the proximity to the story. How, in my own unscientific, micro sampling of one Karen, it’s been a transformative experience. It’s why we are so excited it dropped on Netflix. As exciting as the nomination has been, the fact that during this trial, this film will be seen by some 200 million people worldwide and can be part of that conversation. To know that we have done something that can be a tiny part of that conversation is something we could never have dreamed of. It’s very humbling. It’s almost overwhelming.”

When writing the script, Free knew that using a device would be an emotional experience, but he recognizes how important that is. The result is something like we have never seen before. The film clearly shows that no matter what Black Americans do, a lot of them end up dead at the hands of the police. A list of names of murdered Black people scrolls at the end of the film and shows some of the places they were when they died.

“For me, being a Black man in America, especially in the last ten years, we see a new video of a cop killing a Black person at a regularity that is insane and obscene. As a Black person, when you process that emotion, you go from anger to fear to sadness to hopelessness and then cycling back to a hopeful place where you can do something to stop it. They’ve scientifically proven that it takes years off your life from going through that cycle over and over again. That is a daily trauma that we live with and is unique to that experience. It feels like the worst version of Groundhog Day ever. My mind and my body go through the same cycle of emotions and stress and that led me of taking a character and trying to do something different. Experience it again and try something different because there’s a narrative of someone should’ve done something different. Even when they are unarmed. People say, “they should’ve listened” or “they should’ve done this or shouldn’t have done that.” They should be alive. To me, it felt like the natural device to use to demonstrate that emotionally and show you what the cycle is like a little bit.”

Roe actually wrote a paper on the Groundhog Day’s usage of the device when he was in college and explored the structure of what that film achieved. When he heard Free’s idea, he knew that the film would be a singular experience. 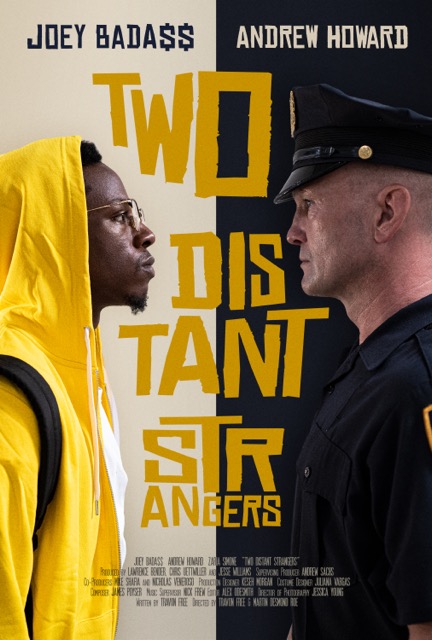 After Carter realizes the situation he’s in, he tries to escape every way he can by changing his path. Every time, he ends up dead. He comes clean to the young woman he’s spent the night with, Perri (played by Zaria Simone), and she simply asks, ‘Have you tried talking to him?’ It leads to the riskiest section of the film where Carter proves to Merk that he is trapped in a repeating cycle and they talk very frankly about race in America. It’s the filmmakers’ favorite section of their film, and Roe revealed they were trying to channel Roman Polanski’s The Pianist with that section’s ending.

“There’s a moment where Adrian Brody survives the war and a German officer gives him his coat. The war is over and he walks out, and because he is wearing a German officer’s coat, they start shooting at him. I saw it on opening night at the Arclight at a 1 a.m. screening. There were like nine people in the theater, and a guy just yelled out, “Oh come on!” That’s the moment we were trying to channel. That fed the energy of Joey. We are shooting every Joey wake up and each one has to channel a different energy. It’s a big emotional change. You pull him out of extreme misery as he recognizes his situation and let it be fun again. The humanity needed to come between them. It’s the first time we see him as a human being. You think he’s cool and there’s more to him. It’s a big revelation to him and, up until that point, he was like the Terminator. We take it away from you.”

After one encounter with Merk, Carter is lying in a pool of blood on the ground. The shape of blood starts to take the shape of Africa on the pavement, and that was purely an accident. Roe explained that that particular sequence was the last one to be filmed.

Ending Two Distant Strangers was difficult for Free because he didn’t want to create a Hollywood ending that erases the struggle between cops and Black people. If he had given it a triumphant resolution, it would appear to undercut the issue, but the film ends on a determined, conscious note. It’s a perfect way to end it and call on everyone to help with this fight.

“There’s no way to tell a truthful story that resolves itself if we haven’t resolved it in real life. It needed to meet us where we are as people which is still trying to find a solution but we are not going to try and stop looking for a solution. That as the strongest way to end the film. There was no way for me to write or say anything about police violence without being controversial in some way because it’s my opinion. What we can all latch onto is the hope that this ends someday and portray the resilience of Black people who refuse to lay down and take this and accept this as an American way of being. It leaves the audience wanting to help Carter to get back to his dog. There are a lot of Carters that don’t get to go home to their dogs. That’s what I want people to think that no matter what the color of their skin happens to be. We know there are answers and there are solutions but we aren’t having conversations that bridge the divide in a way that people empathize enough with the Black experience. It’s not a Black-white experience–it’s a Black life experience. It’s wanting to just live and survive and that’s where I landed with wanting to be hopeful.”

For me, Two Distant Strangers was a reminder to check my privilege at the door. Black Americans need people of all races to stand with them in order to get this under control. If you are white, don’t think that you can’t talk about your privilege and not recognize that you have to do more.

“Please say that out loud. People need to know that it’s something that they can’t say. As a Black person, I need you to say that so other people feel comfortable fighting the fight to take the mantle up with me, with us. It’s okay to be inspired by a movie and take action that is a real life matter. I’m so grateful that you said it and I wish more people would say it. It’s incredible that we made a movie that elicits a response from people with a subject that has been so controversial and so polarizing. This is not made to be that. It presents the situation for others to understand and to make you want to do more.”

Trial of the Chicago 7 - Is the Most Popular Movie of the Year Really Not Winning Anything?