Trial of the Chicago 7 – Is the Most Popular Movie of the Year Really Not Winning Anything?

The Trial of the Chicago 7 entered the race as the favorite across the board. It had all of the guild nominations, missing only the directing nomination at the Oscars:

It was clear at the beginning of the year, with how the critics awards were coming down and how all of the awards have come down that voters were prioritizing films by non-white, not-male directors. But now that the BAFTAs have rung in, it seems clear that both Sound of Metal and The Father are winning maybe at least one Oscar. Maybe more, but the pundits figure Sound of Metal will win Sound and Editing and the Father might win Adapted Screenplay – and some are even speculating it could bring in a surprise win for Hopkins (I am not one of those people). But the Chicago 7? Nothing. Why?

In the era of the expanded ballot, it is rare but not unheard-of for multi-nominated films to go home empty handed, even if voters do like to spread the wealth more often than not. In fact, it is only 2014 and in 2018 where no film went home without at least one Oscar: 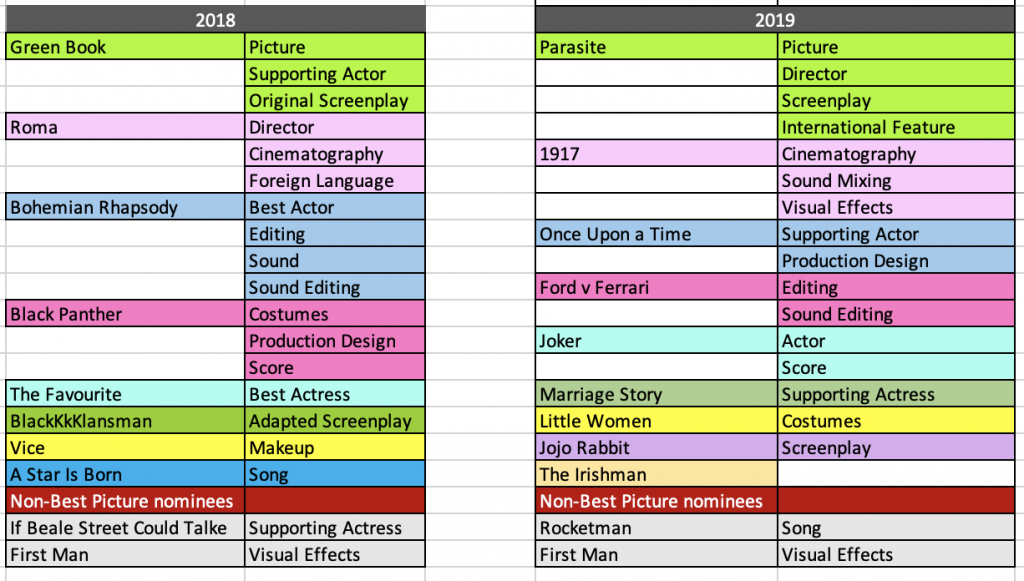 This year, the general consensus seems to be: 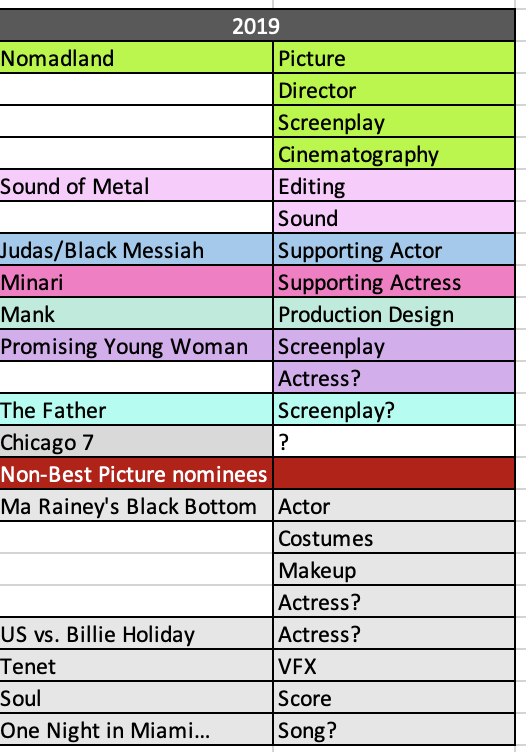 This chart does not look right to me. As some have already pointed out on Twitter, a non Best Picture nominee winning so many Oscars would be extremely unusual. It would indicate that voters did not like the nominees as much as they like the non-nominees. That is also true with Best Actor, by the way. Thus, it continues to seem unlikely that both Actor and Actress will go to Ma Rainey. It could happen, of course, anything can. But it would be … unusual.

As it stands now, according to the Oscar pundits, Chicago 7 won’t win any Oscars, even though it started out the year as the frontrunner. There was resistance to it because the Oscars this year are most definitely about making change. The Oscar voters and and the Globe voters and all of the voters who came before them have been indicating all year that they are in the mind of voting for change. Dramatic, fundamental change that makes headlines. To them, Chicago 7 is the kind of movie that would have won Best Picture and Screenplay, at the very least, in the old days. It is a movie about heroic white men leading a charge to make the same kind of change today’s activists are fighting for.

Was Aaron Sorkin too fair? Too balanced? Did he ruminate on the past too much in an honest way for the kind of either/or mindset people have today? Sorkin very much calls out how badly the Left bungled their cultural revolution back in the 1960s by becoming too extreme, to militant, too demanding and yes, too radical.

They were true believers back then and were willing to die for the cause. It is hard not to look around and see much of the same spirit, isn’t it?

Their antics scared the silent majority into not only voting for Nixon in an historic landslide (losing every state except Massachusetts) – but tipping the pendulum eventually into the hands of Ronald Reagan in 1980 whose administration would rule for the next 12 years. If you lived through that trajectory – from the counter culture 60s through the 1980s then you know what happened, how America shifted into the hands of conservatives and how it would not be until 1992 when Bill Clinton ran that they would reclaim any kind of power. And really, the cultural and political Left would not awaken to any real power until Barack Obama in 2008.

The Trial of the Chicago 7 isn’t just a celebration of heroes. It isn’t just a retelling of a similar moment in our past. It is also a warning to pay attention to what might be coming next. Because we know his work it is easy to take Sorkin’s gifts for granted.  Usually his role in filmmaking is hand over the script with the gasoline-on-fire dialogue — you want me on that wall, you need me on that wall — while the director crafts a whole movie. But Sorkin made the whole movie this time. It would be a shame, and not exactly an accurate read of the year in film, if it did not win a single Oscar.

So what can Chicago 7 win? Well, it could win editing and it deserves to win editing. Voters will be torn on whom to award for this prize, that’s for sure. With Chloe Zhao herself in the mix, and with the frontrunner, Sound of Metal is more than worthy. But watch Chicago 7 again and watch especially the first hour. That is a master class in editing. Of course, I say this as someone who only writes about the Oscars. What do I know about editing. It does recall a Bob Dylan line, though – in every frame you can see the master’s hand.

Every Oscar year there are those that got away. They didn’t win because they weren’t the movie or performance of the moment. Voters vote with their hearts. Nothing else motivates them. It has to be pure love or nothing at all.  We won’t know which of this year’s nominees will flourish in the coming years. We won’t know because we can’t know how culture will change around the movies. Some will hold their place over time, some won’t.

2020 was pure madness and horror in many ways and somehow we had an Oscar race anyway. I think the industry will be proud of the winners as it stands now. They will show what the Oscars look like when you remove all of the economics of producing and releasing films. Had Trial come into the race with $100 million banked – as it might have – we might be looking at a Best Picture upset. But there is no visible way to measure popularity other than awards won or money made. There will no breadcrumb trail left behind to explain why this beloved movie did not win a single Oscar.

Tags: The Trial of the Chicago 7

The Case for... Glenn Close

Behind the Incredible Animation of ‘Mitchells vs. the Machines’

THE MITCHELLS VS. THE MACHINES - Mike Rianda as “Aaron Mitchell”. Cr: ©2021 SPAI. All Rights Reserved.

It’s the ‘Halston’ Trailer You’ve Been Waiting For…