The Preferential Ballot Makes That a Tough Call

There are two ways to look at splits in the Best Director / Best Picture categories. The first is that it was much more possible in the era of five Best Picture nominees where a simple majority ruled. In those cases, two big films could “split the vote” — which remains a controversial theory — leading to a surprise winner.

One such year was when Chariots of Fire beat Reds and On Golden Pond. What we’re really talking about with splits in those kinds of years, though, are mostly splits regarding the actors. They are the largest voting bloc in the Academy and if they’re hearts and minds are split in two different directions, as they clearly were that year, the support needed to pull in a win likely comes from the other branches: producers, crafts, etc.

Both On Golden Pond and Reds were, it should go without saying, very popular with actors. 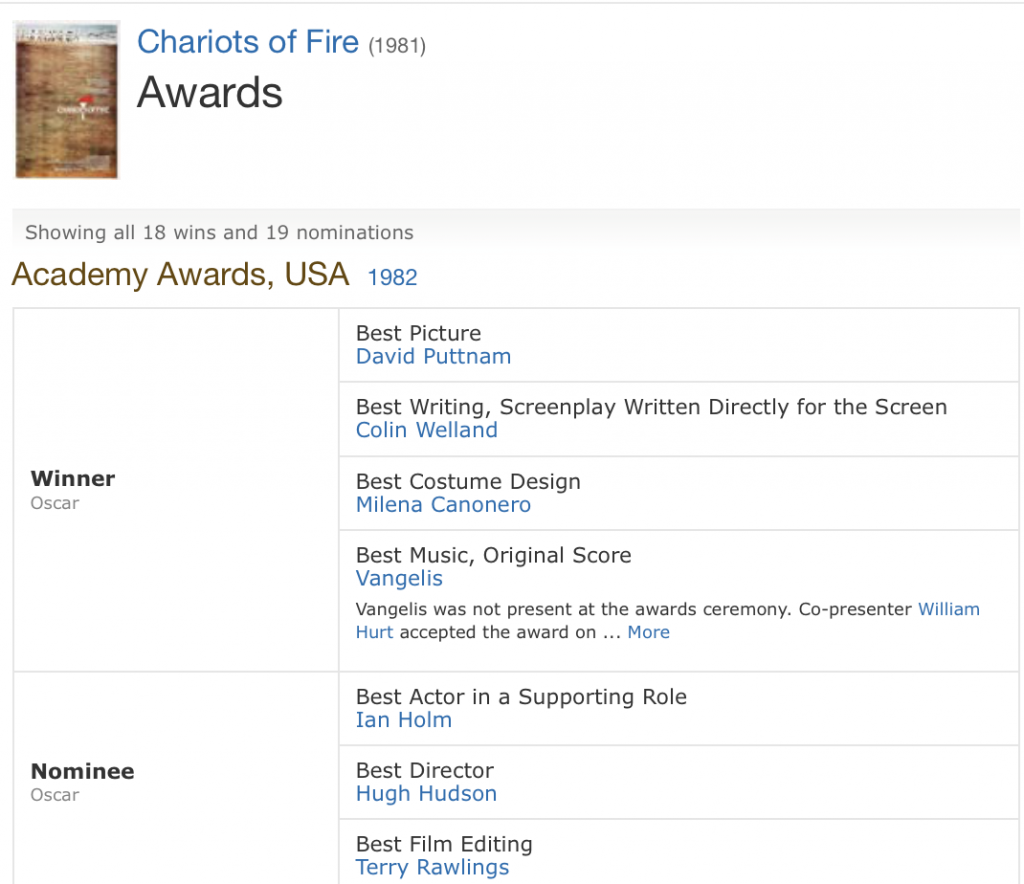 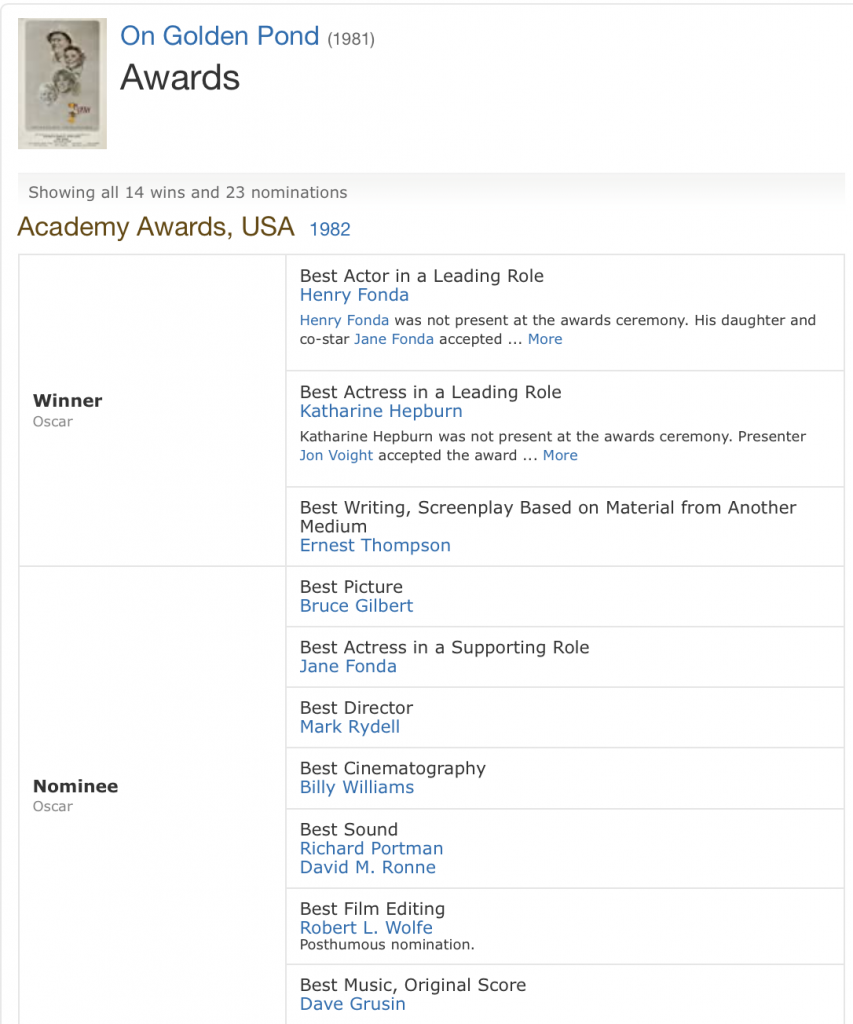 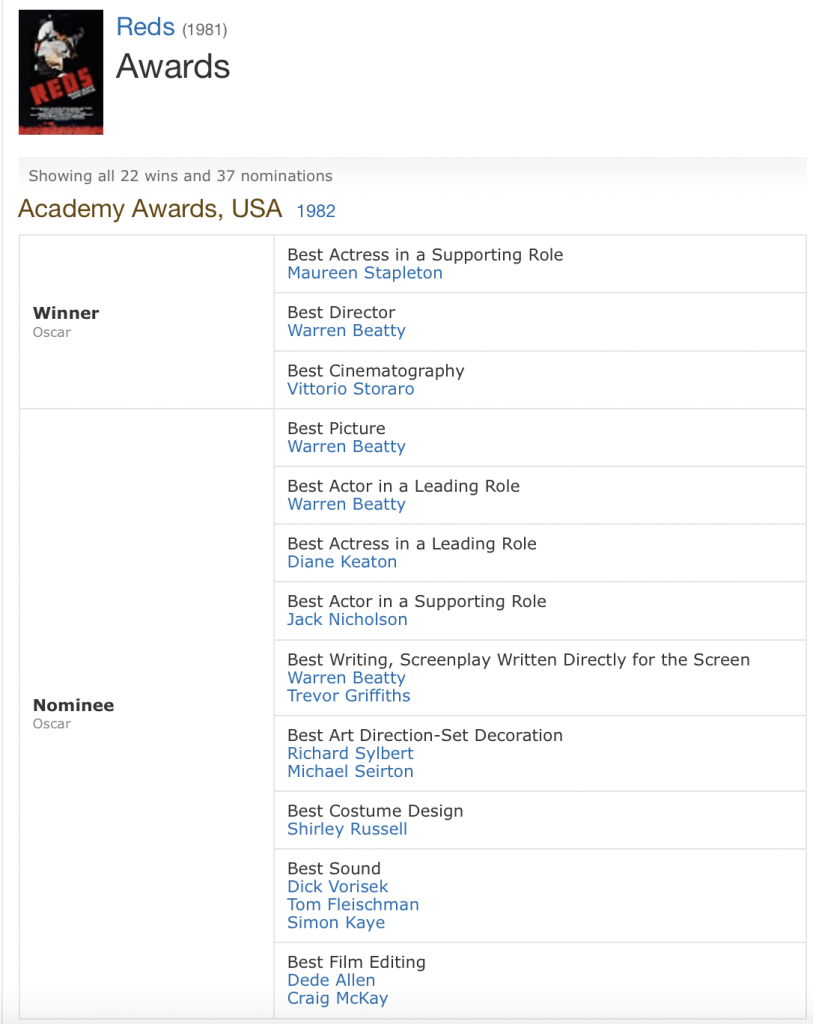 When it comes to the preferential ballot, however, things are a little more complicated. There are no “split the vote” scenarios where two big movies can compete for the top spot and a third benefits. Usually they come in like an actual horse race. If you imagine the three fastest horses arriving at the finish line those are the only ones that count. A preferential vote is going to be down to those top three. If none of them makes it to the target number, meaning if two movies are competing for that number one spot, there will be a redistribution of the smallest stack of ballots. At that point, whatever film has “urgency to vote” for it beyond a number one choice they will pick up ballots on the next round of voting

When I did our preferential ballot experiment a while back, and when I did a similar one on Facebook, it was pretty clear that the votes were coming in this way:

While Promising Young Woman did threaten to overtake Nomadland, it never quite did. That’s because Nomadland picked up more down ballot votes – twos and threes, fours and fives. The reason being is the movie is not offensive to anyone. No one can attack it, particularly, or passionately hate it. No one is going to have a visceral reaction to it in a negative sense and no one really wants to see it lose. In the era of the expanded ballot, you really do need to have a secondary reason to push a movie up the ballot for it to win. Like – you “admire” it and want to see it do well. You feel you are doing a “good deed” with your vote. You like the people involved and feel slightly guilty that it isn’t your number one choice. You might have any other movie at number one, but you are still going to be putting Nomadland high on your list because you feel good about voting for it even if you do not passionately love it.

For Promising Young Woman to win, it would need more number one votes heading in to overtake Nomadland in the first round, but then it would need secondary votes (what I think of as the “guilt vote”) that push a movie to the top of the ballot. I don’t think Promising Young Woman gets that kind of vote. It gets the passion vote, but it doesn’t get the guilt or obligation vote like Nomadland does.

We’ve gone over the split vote scenarios where the years have been unpredictable. Let’s go over them again just very quickly.

All of those films except Argo also won Best Director, but we’re talking mainly about Best Picture and in these cases, very likely these films all won on the same round.

Now we can look at last year’s winner which we can see as an anomaly:

2019: Parasite — WGA/SAG vs. 1917 — PGA/DGA. There were several things happening at once last year. The first was Parasite was building word of mouth. Many people simply had not seen it until it won the SAG ensemble award in a surprise (very likely there was a “split the vote” scenario happening there between The Irishman and Once Upon a Time in Hollywood, and along with the controversy of there being all white acting nominees, led to an “urgency to vote” for Parasite).

The SAG win for Parasite changed the dynamics of the race. Whenever there is a lack of a SAG ensemble nomination, you have a potential for an unpredictable outcome in the race. That is because, if you’ve been reading along so far you will already know the answer, the ACTORS. If the actors support another movie than the frontrunner, that movie has a shot at winning.

But understanding Parasite’s win last year means you have to understand that it very likely came in at number one and there was no recount. You know this because Bong Joon Ho also won in Director. And Screenplay. And International Feature. That tells you these voters wanted to award Parasite with everything they had. It was pure love. It was a desire not to award all white actors and filmmakers. It was how good Parasite is. It was how Parasite’s themes really resonated during the Trump era. It summed up so much of what people were feeling, and honestly, how good the performances were. It really had it all.

The stumbling block for people like me was the stats. With Parasite you could just feel the momentum building. You could feel the buzz and excitement. I could feel it walking into the Dolby on Oscar night. I could hear voters buzzing about it. They knew they had the chance to do something GOOD with their vote, something revolutionary and historic, and undo the bad taste in their mouths over how their Green Book vote was received. If you followed the stats you would have had to conclude that 1917 had it in the bag. Sure, you could follow the ACE/WGA/SAG stat, which is valid. But it can only bear fruit if there is a lack of enthusiasm for the frontrunner.

Now let’s look at the split vote years that were extremely hard to call:

12 Years a Slave vs. Gravity — all I remember is running up to Steve Pond at the Spirit Awards and saying to him in the same tone of voice from the Twilight Zone episode where they suddenly realize To Serve Man is a cookbook and that 12 Years a Slave was going to beat Gravity because the pattern had already been set. I looked at In the Heat of the Night versus The Graduate and saw that when voters elect to split the vote early, where one movie is going to win Best Picture and another will win Best Director, that it follows on down the line. That year it was true at the Globes — Alfonso Cuaron won for Gravity — and true at the DGA. At the PGA, both films won in a tie but only one had the SAG ensemble nomination. Remember, ACTORS. This was also true in the Driving Miss Daisy year as poor Bruce Beresford, for whatever reason, was not nominated for Director anywhere. Not at the Globes, not at the DGA, and not at the Oscars. So who was winning that year instead? Oliver Stone for Born on the 4th of July.

I don’t believe the results would be any different if there was a five-nominee Best Picture ballot because the split was already pre-planned for voters.

Spotlight vs. The Revenant — this again was a situation where the actors decided. Spotlight, like Parasite, had won the SAG ensemble award. The Big Short had won the Producers Guild and The Revenant had won at the DGA. The Revenant probably had passionate support, but it did not have that crucial SAG ensemble nomination. It did have Leo DiCaprio winning, which might have sent it cascading to a win on a five-nominee ballot (probably). This is the best case for how the preferential ballot disrupted the Oscars greatly, especially given that Spotlight only won two Oscars: the lowest trophy haul for a Best Picture winner in over 60 years.

Moonlight vs. La La Land — probably the hardest race I’ve ever called and gotten right in predicting Moonlight to upset. The reason being was it prevailed on my preferential ballot experiment as it picked up not just number one votes but if it wasn’t number one, it was going to be number two or three. That was a Nomadland-like scenario where voters felt good voting for it. They wanted to see it do well and felt they were doing a good deed. La La Land, like The Revenant, had no SAG ensemble nomination and for a movie about actors, even a “two-hander,” seemed odd to me. It was a movie ABOUT ACTORS. It should have easily nailed that nomination. So right away I saw a weakness there.

Green Book vs. Roma — this was another tough call that I predicted based on a few factors, but namely that I did not think Roma would win. Mainly because we just saw a similar vote split agreed upon at the Globes. Green Book won Picture and Screenplay where Roma won Director. Roma could not win in Picture because it was not nominated. Green Book then won the PGA, and Cuaron the DGA — agreed upon split unfolding. Though Green Book did not have the SAG ensemble nomination, it did have Mahershala Ali. It was also an actor’s movie where Roma was a director’s movie. In the end, it was touch and go. There wasn’t any crowd-pleaser more pleasing that Green Book in the race that year or it would have won. If the voters know they only have two options — Roma or Green Book — I knew they would pick Green Book. I also don’t think Roma would have won on a five Best Picture ballot, for the same reasons it could not win on a preferential where its chances were greater: at that point the Academy was not ready to award both a “foreign language” subtitled movie AND a Netflix movie.

This is where we are now. I do think predicting an upset isn’t a bad way to go, whether that’s Promising Young Woman or the Trial of the Chicago 7. But me — I got to go with what I know to be true and that’s that Nomadland has high ballot support, along with number one votes.  I think that brings in the win for them. At least, that is how it feels right now.

Best Original Screenplay
1. Promising Young Woman
2. The Trial of the Chicago 7
3. Minari
4. Judas and the Black Messiah
5. Sound of Metal

Best Cinematography
1. Mank
2. Nomadland
3. Judas and the Black Messiah
4. News of the World
5. The Trial of the Chicago 7

Best Visual Effects*
1. Tenet
2. Love and Monsters
3. The Midnight Sky
4. Mulan, Sean Faden,
5. The One and Only Ivan

*No clue. No Best Picture nominees. But Tenet is the only one with both Prod and VFX.

Best Documentary Short Subject
1. A Love Song for Latasha
2. Colette
3. A Concerto Is a Conversation
4. Do Not Split
5. Hunger Ward

Best Original Song
1. Speak Now, One Night in Miami
2. Fight for You, Judas and the Black Messiah
3. Hear My Voice, The Trial of the Chicago 7
4. Húsavík, Eurovision Song Contest
5. Io Si, Seen, The Life Ahead

Trailer: ‘Dear Evan Hansen’ Will Be Found in Theaters This September

Norma – How to Remake an Untouchable Classic?

Christopher Oroza-Nostas on Interpreting Pain and Violence Through Movement in the Gorgeous Short, ‘Savior’