New Poll reveals movie awards to be distasteful for many reasons, politics tops them all

by Sasha Stone
in featured
122

For most of the time I’ve been watching the Oscars people have said to those taking the stage, “stick to entertaining.” It was frowned upon to “get political” and the few times it happened – Marlon Brando, Vanessa Redgrave, Michael Moore, Kim Basinger – it was a big deal and it was divisive. But back then, back before extreme polarization many of us in this country came from a place of “everyone is entitled to their own opinion.” That is no longer true. And while I notice it on the Left more, I’m sure people would say it also exists on the Right. I don’t know since the only angry shrieking mobs I’ve personally encountered have come from the Left.  Good times.

There is no doubt that Trump’s win in 2016 changed everything for Hollywood and the Oscars, both in terms of how the voters voted on, wrote about, tallied about movies but also in how the awards show itself was presented. Trump did what no president in my lifetime has ever done – he attacked the Oscars themselves. He attacked Hollywood. That put the Oscars on the defensive against Trump. They saw themselves as part of the “Resistance” and still do (newsflash: you can’t be the resistance when you are the empire). That meant every speech, every win, every choice was somehow part of the Cold War between Obama’s America and Trump’s America.

It wasn’t even a matter of whether people would “get political” anymore – it was a matter of, if they didn’t “get political” they’d likely be called out, shamed, etc. So the majority got political – either because they truly felt it in their bones or else they were going along to get along. Either way, by some point in the past four years it became an exhausting spectacle to watch the most privileged people in the country complain at a movie awards show where they are giving out awards to themselves. The media praised them continually and still do. Twitter mostly praised them. The ratings began to tank. Many chalked that up to ratings dropping for network television across the board, but my own personal experience, talking to people I know – their interest in the Oscars was dimming. It isn’t just about the politics to them, though. It is also about the choices themselves being political. Essentially, the Oscar race has become much more about activism than about awarding the greatest films and artistry of the year. This is not a conversation that can be had online. It has to be had either in real life or safely tucked away in DMs. Either way, for me anyway, it has been constant.

At any rate, here is a poll from DISH that shows a majority still cares about movie awards: 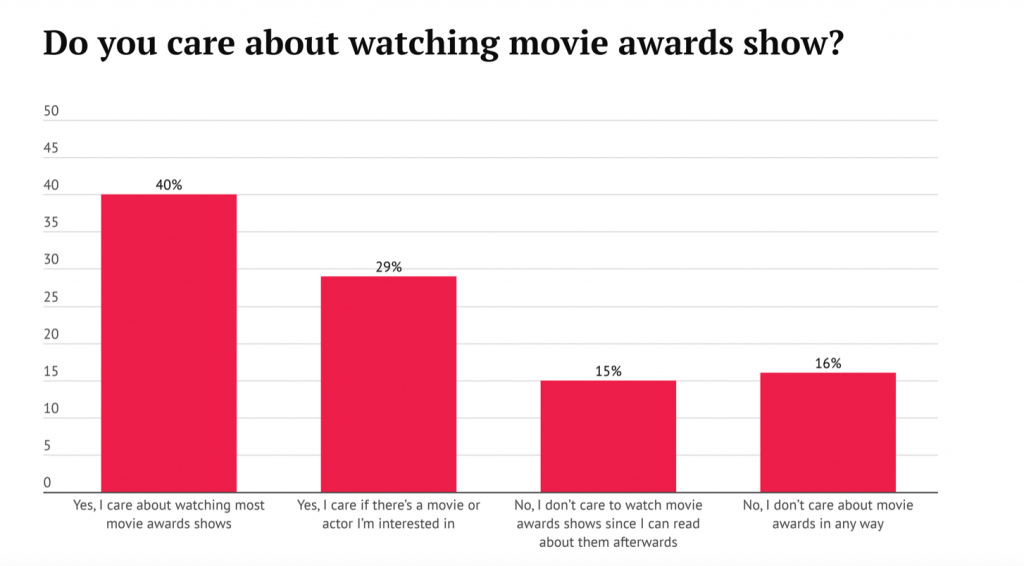 Over 80% of our survey takers find movie awards shows offensive or at least distasteful—64% cited concerns about politics and diversity, and 21% want classier jokes. Most viewers aren’t as bothered by the running time, with only 15% citing length as the main issue. 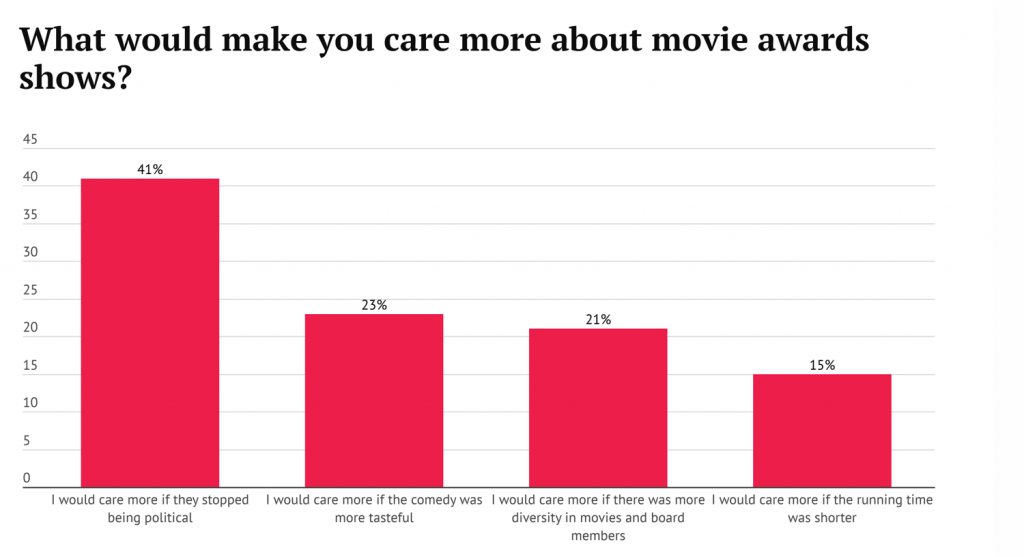 Movie nominations influence the movie choices of a good 70% of our survey takers—the same percent that cares about watching the awards ceremonies. Only 30% said an award nomination doesn’t affect what they watch on movie night. 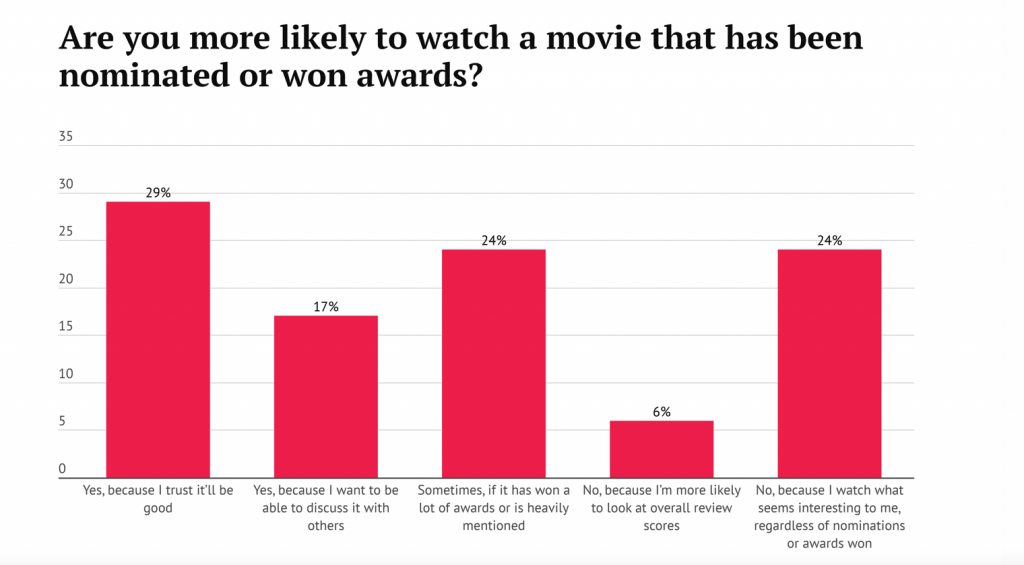 Most of our moviegoers (59%) consider the timing of the awards show when watching nominated movies, with preferences for before and after split right down the middle. The remaining 41% may not care to watch at all, or they just don’t care about watching at the same time as everyone else. 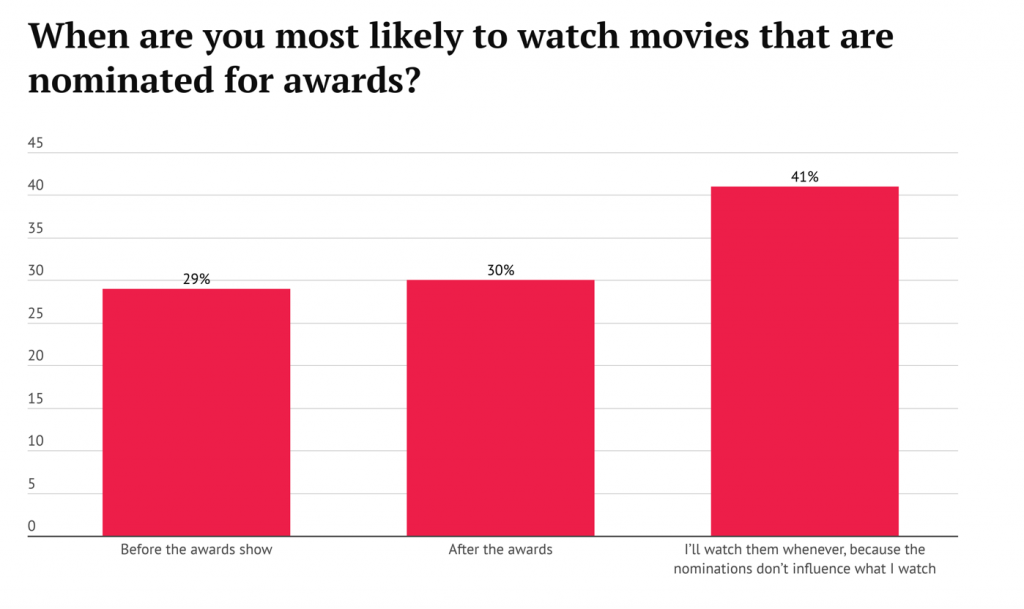 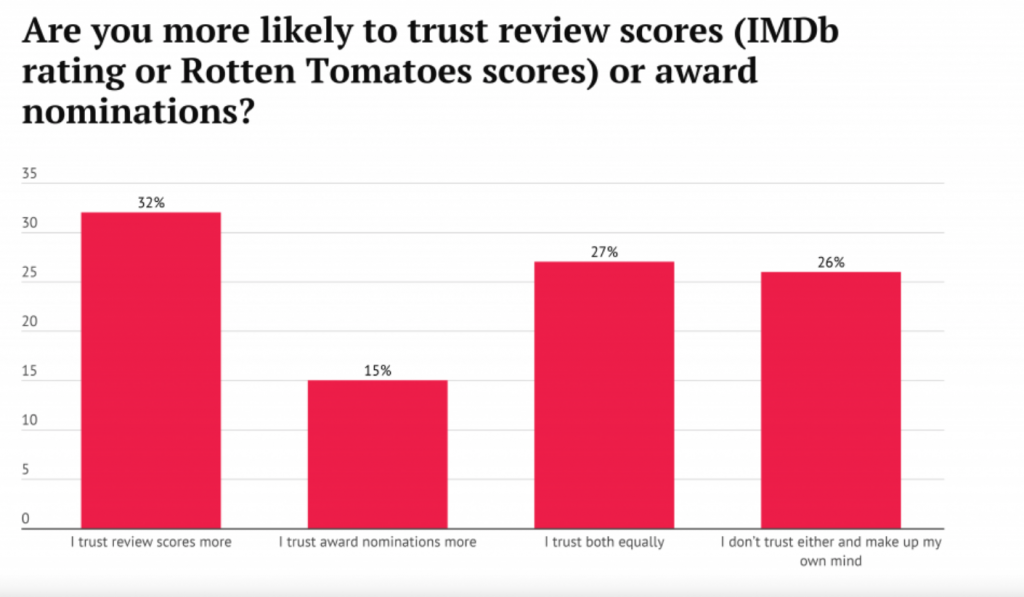 (My comment on the above: they’re pretty much the same thing, more or less, when it comes to awards).

Nearly half of our survey takers (48%) value movie scores and ratings most, because they believe reviews better reflect the average viewer’s taste. Only 15% put more stock in movie nominations, while a sizable remainder of survey takers (37%) trust both sources equally or not at all. 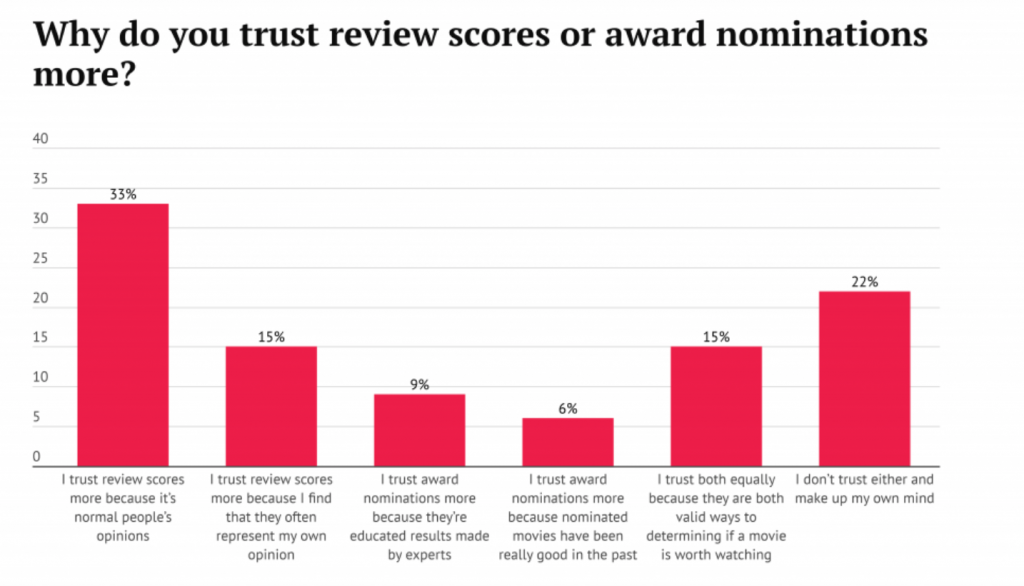 The best news for the Academy is that they are still the most trusted overall by a long, long way:

Most trusted film and television awards

Exactly half our survey takers trust the Academy Awards over other high-profile movie awards. The other major US film awards each received between 10% and 20% of the vote, and the British BAFTAs came in last at just 6%. 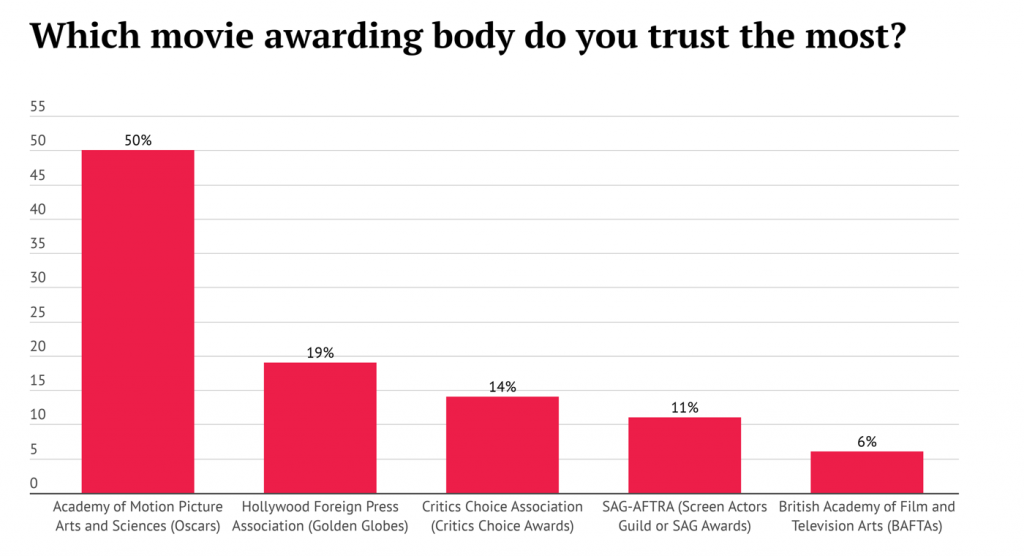 The full report is here.

Here is the thing people on the Left in general, and in Hollywood specifically, should realize.  Things have changed. Joe Biden is now the President.  Our country is still as polarized as it has ever been and the Cold War continues – and it might even become a Hot War soon. Unless we divide into two countries we have to find a way to get along. When your entire awards community reflects just one side you are going to lose half the country walking in the door. I don’t expect many people who cover this race or make movies or win awards care much about that. The irony about the times we live in is that our gender identities are becoming more fluid as our thinking is becoming more strident and binary.

In my opinion, which is probably not worth all that much, art that panders to one ideology is not art. It’s propaganda. Humor that panders to one ideology is not funny. The only thing art must do – is tell the truth. The whole truth. And nothing but the truth. That means seeing the whole country, the whole world, for what it really is rather than what we want it to be. In other words, when you’re being served your specialty meal in first class don’t forget about the people sitting in coach.

Is ‘The Last of Us’ Actually ‘The Walking Dead’ For Smart People?