The Motion Picture Academy of Arts and Sciences announced today key dates for the 2022 Oscar season. The 94th Academy Awards will now take place on March 27, 2022, moved back from its originally scheduled date of February 27, 2022. The 2022 Oscar season will not be extended, however. The eligibility window runs from March 1, 2022, to December 31, 2022.

This is an exciting development as it gives the season a chance to breathe. People can actually see available films and judge on their own time, rather than lose a month and rely on so many other awards bodies to sift through potential candidates for them. Granted, much of that is still going to happen, but at least it’s not a mad rush to the end.

The Academy also released news on eligibility requirements regarding films whose distribution continues to be impacted by the COVID-19 pandemic. Here is the Academy’s statement on these rules, and full eligibility rules will be announced in June: 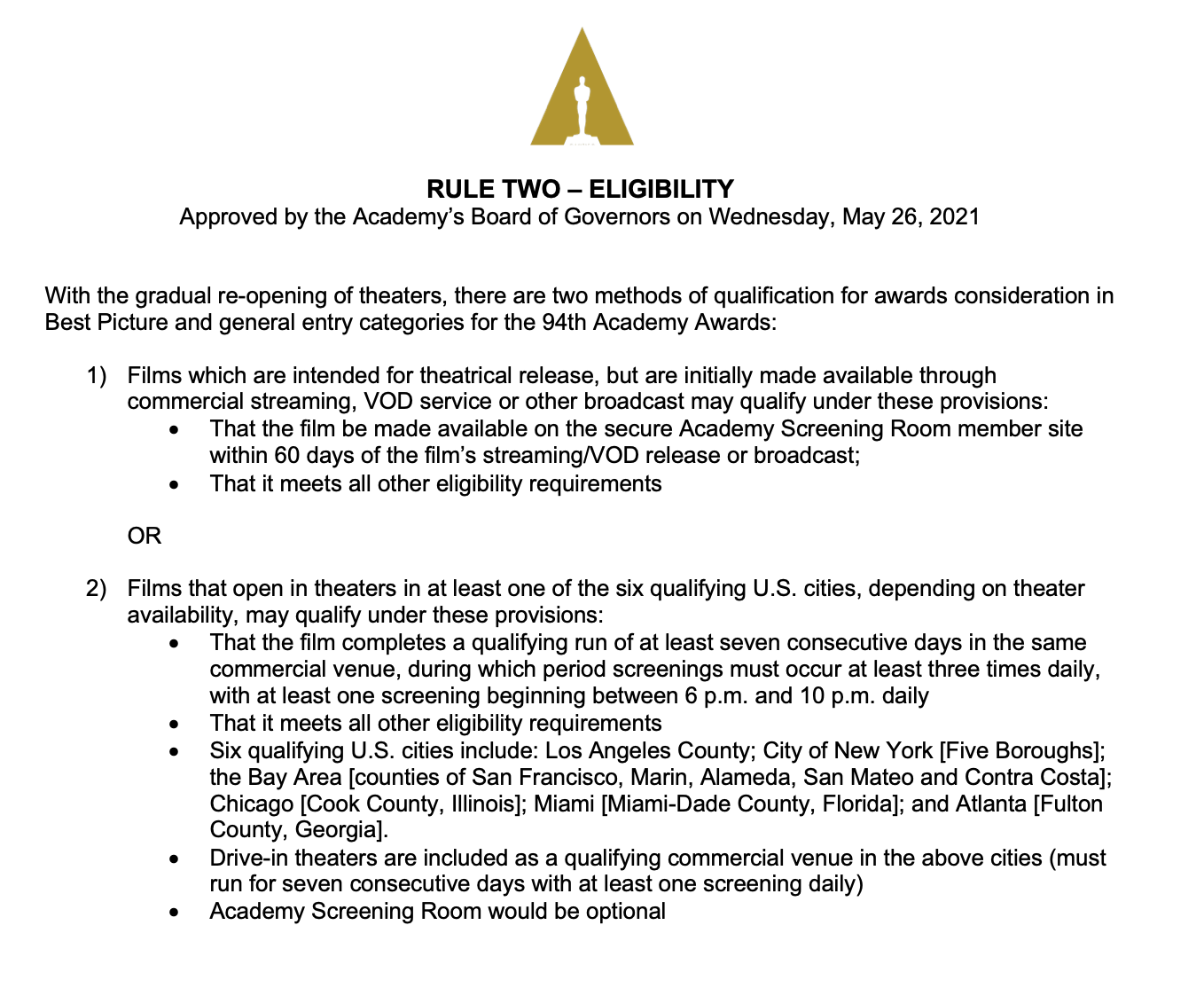 Here is the full press release from the Academy, including major dates for the 2022 Oscar season.

FOR 94TH OSCARS®LOS ANGELES, CA — The Academy of Motion Picture Arts and Sciences and ABC today announced the 94th Oscars® ceremony will move to Sunday, March 27, 2022.  The show, which will air live on ABC from the Dolby® Theatre in Hollywood, was originally scheduled for February 27, 2022.

The eligibility period for Academy Awards® consideration will return to the standard December 31 deadline: a feature film must have a qualifying release date between March 1, 2021 and December 31, 2021.  This year, which is still impacted by the pandemic, eligibility requirements for the 94th Academy Awards will be consistent with the addendums made for the 93rd Awards season and can be found here.  Complete 94th Awards rules and specialty category submission deadlines will be announced in June.  Following this year, the Academy intends to expand the qualifying requirements for the 95th Awards.

Academy key dates for the 2021 Oscar® season are as follows:

All dates for the 94th Academy Awards® are subject to change.

The 94th Oscars will be held on Sunday, March 27, 2022, at the Dolby® Theatre at Hollywood & Highland Center® in Hollywood and will be televised live on ABC and in more than 200 territories worldwide.