The State of the Race: A Quiet Place Part II and Best Picture

by Sasha Stone
in BEST PICTURE, featured, The State of the Race
22

The Academy and the Oscars, along with the film industry overall, is in the midst of big structural change from top to bottom. Part of that change is handling the COVID pandemic in terms of movie theater attendance. Hollywood is at a crossroads between films released on streaming or in theaters. If you look at the box office in China, it is clear they dominate the world’s market for movies at the moment, both with homegrown product and imports. They go to the movies. They like going to the movies. Not even COVID held them back. Then again, it appears that they dealt with COVID right away, with strict mask enforcement, extensive contact tracing them, and in once instance locking dozens of individuals in their own homes in a suspected apartment block hot spot.

Their box office has been thriving where America’s has nearly collapsed. 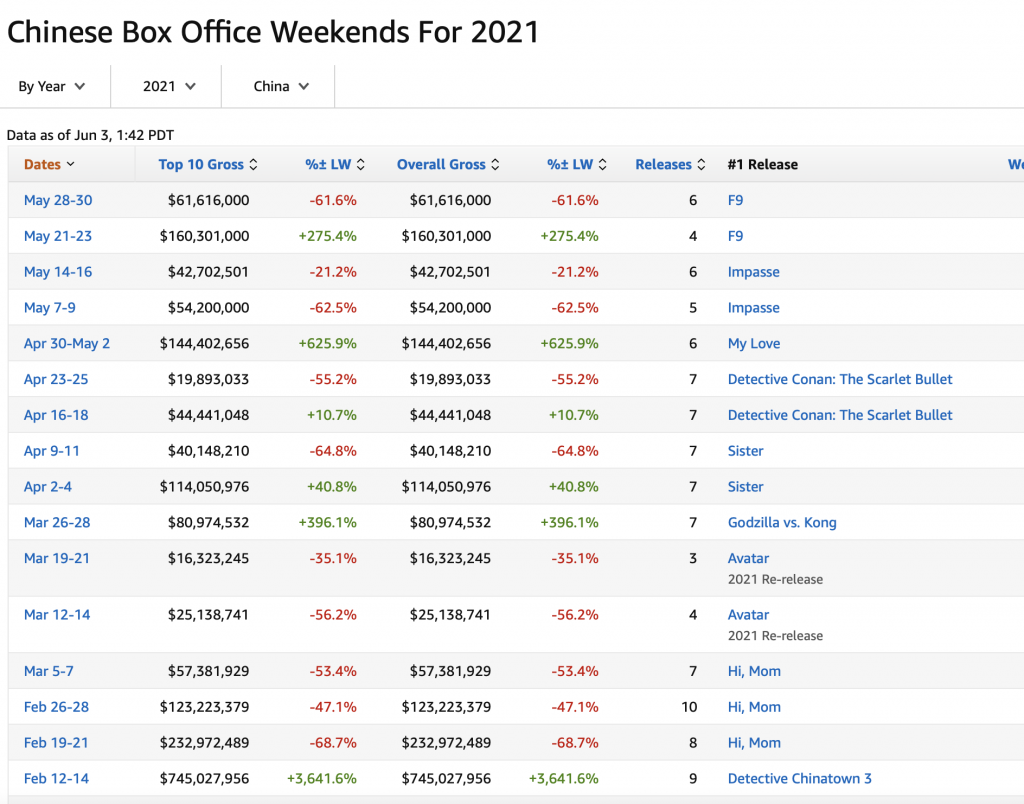 America’s box office got a major boost this past weekend, with A Quiet Place Part II.  It might not seem like. big deal but for this country and this industry it most definitely is.

Now, granted, if we look at past Memorial Day weekend takes from years prior we see:

Down about $100 million but still, it does look like it’s very likely big genre movies like this will continue to play in theaters. But that is until you look at the summer release pattern of big genre movies where many of them are playing on HBO Max and Disney Plus. The difference between America and China is the difference between Capitalism and Communism. In our culture, we are into our big televisions and our big streaming platforms – almost everything in our culture is to make things easy and accessible for everyone from the comfort of their couch. Cost of living, movie ticket prices are all around cheaper in China – and I imagine that makes movie going somewhat preferable to couch sitting, as it is here. This is just crap amateur sociology talking here but the point being, many Americans are going to be leaning in towards streaming and (eventually) away from movie theaters. Alas.

The rest of the films released this summer appear to be theatrical. That means the box office will be back but only partly back. Paramount did not allow for any online viewing of A Quiet Place II, which meant everyone had to get out to the box office. They are mandating masks be worn in theaters – so that might help some but I would wager that more people in the red states are going to turn out to movies they want to see where people in the blue states are going to remain more cautious about returning to the theaters for films they want to see. That is partly why A Quiet Place II has done so well – it isn’t directed only at one side of the political aisle but is just a good old fashioned mainstream Hollywood thriller that anyone can watch.

The film is also enjoying high ratings at Rotten Tomatoes by both critics and audiences. The only thing in its way is that it is a sequel and a genre movie. If it were named anything other than A Quiet Place Part II it would have a much better chance, I figure. But as such that is tackling two of the Academy’s prior bias towards both genre movies and sequels. I still don’t think it can be written off precisely because it can be positioned as the movie that saved Hollywood. But also John Krasinski is very well liked. I’m keeping it in my sights, even if I know that it is a long shot at this point.

The only two films right now that seem to be in any way Oscar consideration friendly would be In The Heights, the musical by Lin Manuel-Miranda, directed by John Chu, and A Quiet Place Part II (despite the title). Tom McCarthy’s Stillwater does have a theatrical release date of July 30, which might unofficially kick off Oscar season.

As usual, at least according to Collider’s release date calendar, the Oscar movies are hitting in the sweet spot of September/October. As we know, since the Academy pushed their date back by one month (in 2003/2004) no film seen after October has won Best Picture. That usually means they premiered at film festivals. Even those that were released straight to audiences were done so October at the latest. Weird, right?

The nomination window is only 5 days, as is the window to pick winners, which is strange. But there is room for contemplation with the later date, as the race will be separate from the flurry of the critics awards. That happened this year too, as you could see by how many people began attacking the movies. What looks hot and fresh in November often looks stale in late February.

The later date gives us a chance to see how things might shift with that extra time. Probably they did it because they are anticipating a possible “surge” of COVID in winter. Maybe, maybe not. Who knows, but they are hedging their bets and in so doing gives us another opportunity to see what that extra time might do to shift things around a bit, maybe invite the public back into the conversation where it had been mostly locked out.

The Academy will have ten nomination slots and ten nominees for the first time since 2009 and 2010 in the modern era. That should mean that it will look a little more like the Producers Guild which has stuck to an even 10 all of this time. They do allow for genre movies like Wonder Woman and “darker” movies like The Girl with the Dragon Tattoo – so that is yet another reason to keep our eyes on a genre movie in the mix, like A Quiet Place II.

For the 94th Oscars (2022) and 95th Oscars (2023), submitting a confidential Academy Inclusion Standards form will be required for Best Picture consideration, however meeting inclusion thresholds will not be required for eligibility in the Best Picture category until the 96th Oscars (2024). But before long, that will be the focus of a lot of press, I figure, and will put a little awkwardness into the process across the board as people wonder what were the qualifying hires that helped them get into the race. But probably in time people won’t even really notice. That we’ll have to keep an eye on as the years march forward.

Here are the films on Collider’s List that I’m keeping an eye on:

And films with no release date yet:

Tick, Tick…Boom!
The Harder They Fall
Being the Ricardos
Don’t Look Up
The Tragedy of MacBeth
The Power of the Dog
Untitled David O. Russell

Coming out of what most people would describe as a disastrous Oscar year, maybe the worst anyone alive can still remember, there will be some changes made when it comes time to vote. My gut instinct is that they will mostly abandon their need to defend themselves and aim more for films and performances they like instead of films and performances they feel they SHOULD vote for. I could be wrong, but that’s my take at the moment.

The problem I have with A Quiet Place II is that 100 people or so have to choose it as number one. When I’m predicting Best Picture that is what I think of. I try to imagine the various Academy types that vote – most of them are like Michael Douglas in the Kominsky Method. Exactly like that. The same exact tastes, sensibilities, societal obligations, etc.  What movies is a guy like that going to put at number one? Then you have the slightly younger types, the George Clooney sorts. They aren’t quite boomers – they still sort of worship the cinema gods of the 1970s (boomers tend to like films from before that, or at least that style). What will they pick as number one of the year? Then the newer, younger members who can be wild cards and tend to vote like Film Twitter does: as activists more than anything else. They are, to my mind, the easiest to predict. That’s because we see them on Twitter every day.

Of these groups only the last ones MIGHT pick A Quiet Place II as number one. But no way is Michael Douglas in The Kominsky Method going to choose that movie. But still, with ten slots you never know. It’s worth thinking about.

Spitballing it right now, sight unseen, my top ten would be (in no order):

2021 Emmys: 'The Crown' Is Out Front While 'Pose' Hopes to End on a High Note in the Race for Outstanding Drama Series