Clarence Williams III and the (should be) Legend of Bobby Shy

by David Phillips
in News, Obits
2

Upon the passing of Clarence Williams III, you are probably most likely to hear about his work on two projects in particular: The Mod Squad and Purple Rain. 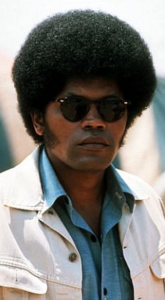 There’s no shame in that. As Linc in ABC’s counter culture undercover cop show about three reformed juvenile delinquents who become crime fighters, Williams not only broke barriers as a featured black cast member way back in 1968, he practically dripped cool all over the screen. The Mod Squad was a huge hit for ABC, and a real breakthrough for network television during its five-season run. While the show was hip, it was also gritty and topical. Williams barely needed to speak he had so much presence, and the combo of his Afro and shades was absolutely iconic.

As Prince’s abusive father in Purple Rain, Williams gives not only the best performance in the film, but he elevates the whole production with his harrowing work as Francis L. As much as I love Prince and Purple Rain (which is to say a ridiculous amount), there can be no denying that the film is largely a thinly-scripted 110 minute music video – except when Williams is onscreen. People have laughed at me for saying so, but I will go to my grave believing that Williams deserved an Oscar nomination in the film. While the music is extraordinary, it’s his work that gives the film cinematic heft.

Now that I’ve gotten the obvious out of the way, I’d like to talk to you about what I consider Williams’ greatest performance ever – as Bobby Shy in John Frankenheimer’s little seen (and positively grimy) pulp picture 52 Pick-Up from 1986. Based upon an Elmore Leonard novel, and starring Roy Scheider as a construction magnate being blackmailed by a mismatched trio of underworld characters (Williams, John Glover, and Robert Trebor) threatening to sabotage Scheider’s wife’s (Ann Margaret) political aspirations by exposing his affair with a stripper played by Kelly Preston.

All three blackmailers are played to the hilt. Glover is a nasty, grinning, scenery-chewing lowlife. Trebor is cowardly and desperate. But it is Williams who is truly terrifying. Much like Linc from The Mod Squad, Bobby looks formidable as hell in his shades and big hair, but instead of dripping in cool, Bobby is bathed in menace. He’s a sociopath who never needs to raise his voice to let you know how deep the water is when you are standing before him. Every word out of his mouth sounds like a threat. If Bobby asked you to go grab a pizza with him, you’d be smart to say that all pizza makes you ill. At minimum, you would certainly allow him to pick the toppings.

It’s an extraordinary minimalist performance. Bobby doesn’t so much walk as glide. He speaks sparingly, but when he does, he makes your knees shake. He is a deliverer of death. No conscience, no feeling, only kill. No scene in the film showcases the strange, unhinged vibe of Bobby Shy more than when he threatens to kill a loose-lipped stripper (played by Vanity, who coincidentally, was originally cast as Prince’s girlfriend in Purple Rain before their personal relationship crumbled) with a carnival-sized Teddy Bear.

I want you to get some sleep. And when you sleep, I want you to say to yourself, over and over again, I ain’t ever gonna talk to that man again.

52 Pick-Up is a pain in the ass to locate, but I beg of you (assuming you are a hardy type who likes your noir black as night) to try. It’s a terrific entry in the genre regardless, but Williams is unforgettable.

After 52 Pick-Up, Williams scored some fine roles here and there in support of bigger stars. He was fabulous as aging gangsters in both Sugar Hill starring Wesley Snipes and American Gangster with Denzel Washington. He also had a significant role in Bill Duke’s woefully underrated noir, Deep Cover starring Laurence Fishburne from 1992. 1995’s Tales From The Hood has a significant cult following too.

But if we are being honest, it’s Linc from The Mod Squad and Prince’s dad in Purple Rain that Williams will most be remembered for. And I think that’s just fine. But if I can play just a small part in introducing Bobby Shy to those who read this tribute, I will be most pleased.

Because Bobby Shy deserves to be remembered as an all-time great cinematic villain. At least among us shady few who deign to dine on dark, gritty pulp.

David Phillips has been writing for Awards Daily since 2018. He is a co-creator of the Reframe series, interviewer du jour, and proud member of GALECA and the Indiana Film Journalists Association. He also scribes on boxing at NYFights.com and runs his own blog dedicated to the appreciation of classic and overlooked films, reelreframe.com. His essay "My Black Grandpa" was shortlisted as "Best of Folklore" by The Bitter Southerner in 2018. His first work of fiction, "Eat 'Em Up, Tigers!" was published in Detroit Stories Quarterly in the 2020 summer edition. You can follow David on Twitter @BrotherJulius83.