by Clarence Moye
in ADTV, CINEMATOGRAPHY
0

A mere few minutes into Disney+’s Marvel Cinematic Universe series The Falcon and the Winter Soldier and you instantly realize things look different. The visuals are vast, widescreen, and cinematic-level accomplishments. Gone are the traditional close-ups most commonly associated with television shows. They’re replaced by intricate placement of characters within the frame, intentionally located there to render emotional subtext within the scene.

The cinematography exists far beyond your traditional police procedural. It’s cinematic in every aspect.

Credit cinematographer PJ Dillon, working closely with director Kari Skogland, for that look and feel. He leveraged widescreen lens and 4K large format cameras to achieve the effect, as he describes here in his interview with Awards Daily. He talks about how framing does accentuate viewers’ senses of particular characters, and he reveals the most challenging aspect of filming the series.

Hint: it has to do with a small town in George becoming an infamous (in comic circles) South Asian island.

Awards Daily: I have a question around approaching a Marvel Cinematic Universe project. As a cinematographer, is there a visual language that you already can plug into? Or were you designing your own look and feel for The Falcon and the Winter Soldier?

PJ Dillon: Well, it’s a little bit of both really. For Falcon and the Winter Soldier, because it follows on from The Avengers movies and the Captain America stuff, there is a visual language and a look that has been established. It was also a project unique in itself. What you try to do is you try to lean into aspects of what’s gone before, but also bring your own unique creative take on on the material and try and make it original in that way. Most of the films that came before were shot in anamorphic widescreen. So we decided that, even though this was a TV show, we would continue with that, so we chose to shoot widescreen anamorphic. We wanted to bring that big screen experience, but Kari (Skogland) and I wanted to bring our own visual input as well.

AD: You’ve mentioned one of the things I love the most about the series — how cinematic it looks. By using those anamorphic lenses, is that how you achieve that cinematic look and feel on a television series?

PD: Partially, but we shot large format cameras, 4K. It’s getting easier, in some ways, to make TV shows look like movies because people’s TVs are bigger than they used to be. What it means is you can shoot wider shots when traditionally TV tended to get in close quickly. It’s not even so much the filmmakers’ choice because I think we would always have shot the wide shots. Yet, the editors would tend to have gotten closer quicker. Now, we’re all more prepared to accept wider shots longer. 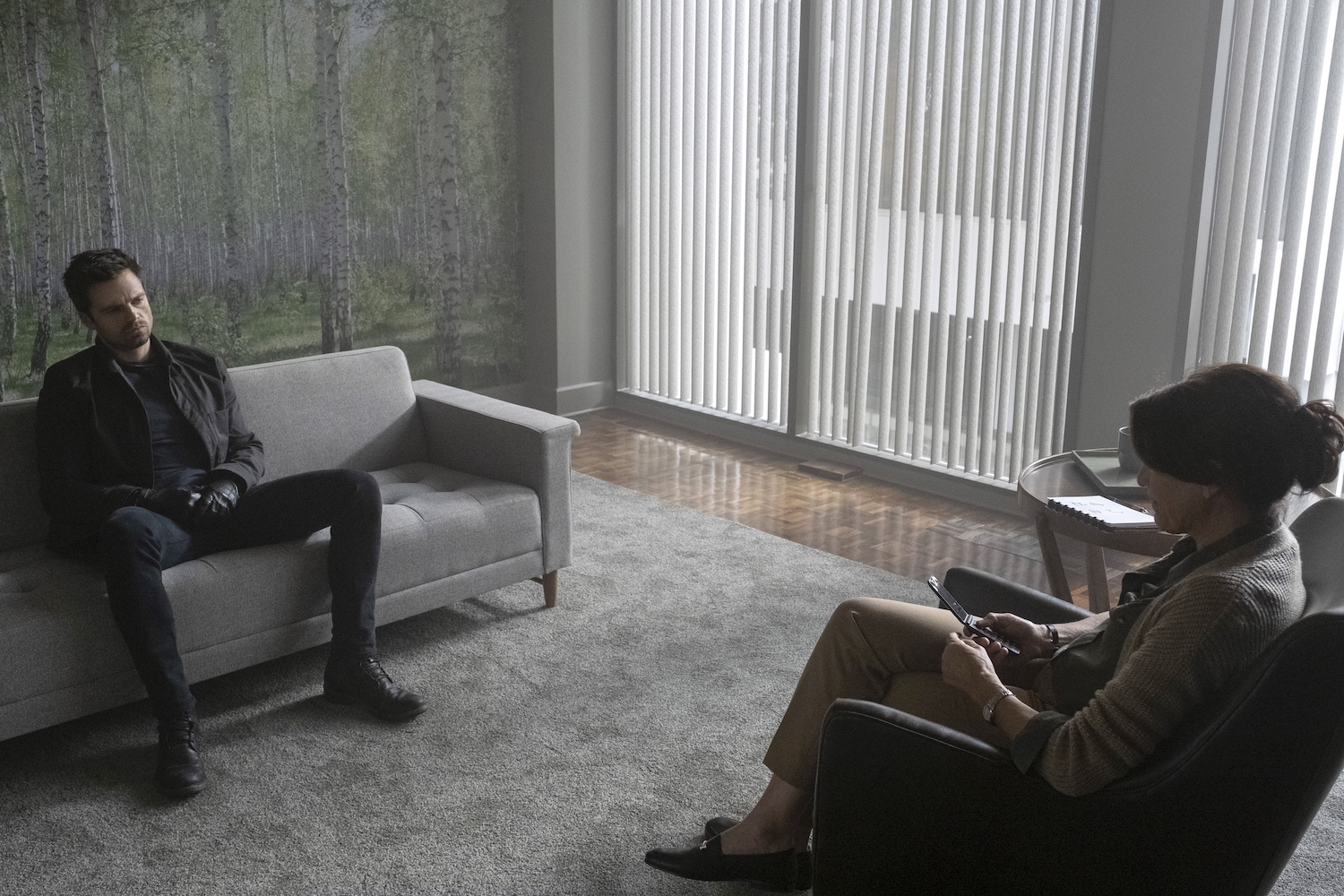 AD: When you’re looking at the interaction between the camera and the characters, there are circumstances within the series where the framing of the character within the image influences how the characters are interpreted? It helps define them thematically? Can you give some examples of how you are framing certain characters to highlight different aspects of them? John Walker is a particular example where I felt like he was placed very strategically within the frame to accentuate certain parts of his personality.

PD: We shot him quite low a lot. The classic hero framing is to shoot low, you know, so because he’s because he’s a very ‘particular’ kind of hero we sort of wanted to accentuate that a little bit, exaggerate a little bit, you know, and play a little bit with that visual language. We went maybe a little lower than you normally would as a way to deflate the character. Our framing of him was slightly ironic, I think.

AD: Outside of the MCU, were there any other cinematic influences on the the visuals of Falcon and the Winter Soldier?

PD: Kari tends to work not so much with film references but with photographic references. She tends to work a lot with stills, not necessarily projects that directly correlate. We had boards of photographs and references from various things for particular scenes. She wanted a slightly raw aesthetic, less perfect than maybe some big budget movie. She wanted things to be a little bit edgier and a little bit rougher. So there would have been some shows she referenced in that regard, but we never took a project and said that’s what we want to do.

AD: What was the most challenging or most difficult sequence to lens?

PD: Probably Madripoor. At one point, we were looking at going to Vietnam or Bangkok, and we ended up shooting it in a little town in Georgia called Griffin in a back alley. We really were trying to establish a new world. We were hiding a lot of stuff there as well. That really was the biggest sleight of hand that we pulled on the whole show. It was really enjoyable, but, just in terms of being technically challenging, that was probably the most difficult.

The Falcon and the Winter Soldier streams exclusively on Disney+.