As Lin-Manuel Miranda’s glorious, celebratory film In the Heights became one of the few films of any note released this year ahead of film festival season, it was carefully scrutinized to make sure it was “right” in its attempt to be inclusive and depict a neighborhood’s demographics “correctly.” Considering how we talk about art now, that’s fair. Even if the original play never intended to be any kind of representative art when it opened off-Broadway in 2007, the film certainly was advertised that way – and proudly. A lot has changed over the past 15 years. Though it would be easy to fall into the trap of saying “nothing is ever enough” to satisfy everyone, it’s better instead to ask the question, “Is the adaptation good?” Most seemed to agree that it was, though there were some detractors.

However, it’s unfortunate to see In the Heights will now be known for introducing the issue of “colorism” into the national dialogue. Prominent voices in the media can’t even pause for a moment to defend art as art. Not in 2021. That concept is verboten. The reason being, the only thing that matters to far too many influencers now is representation. 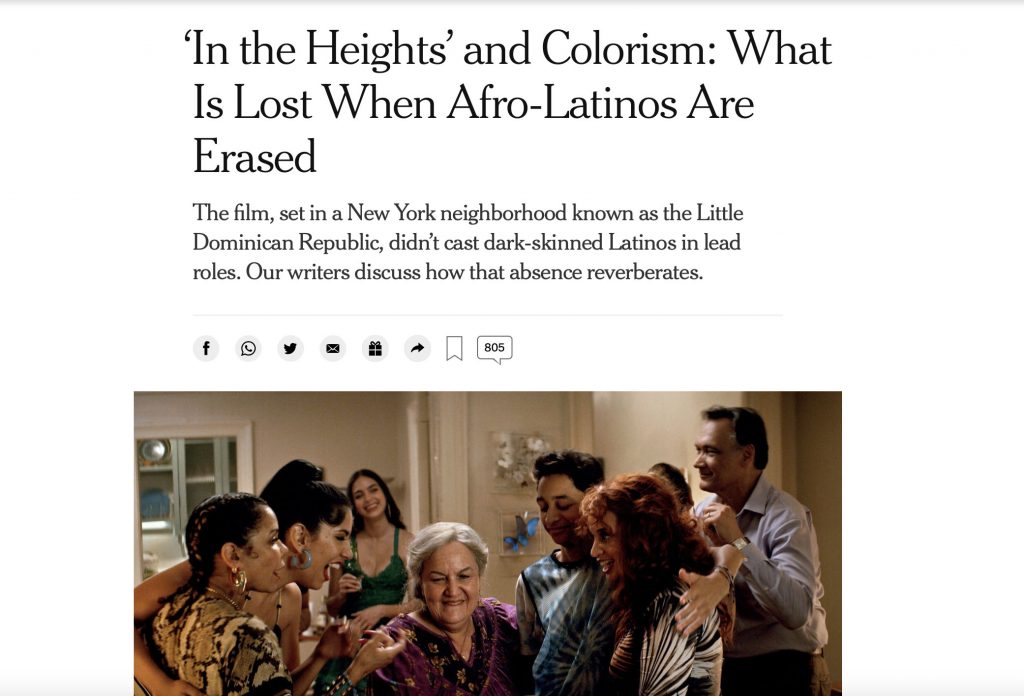 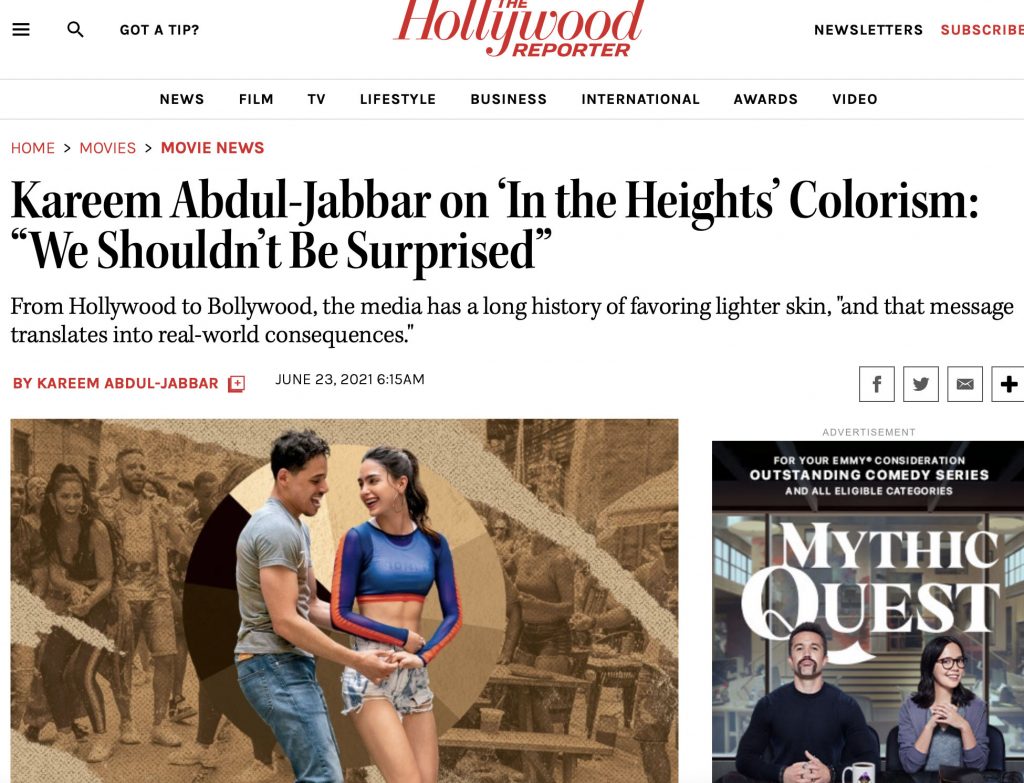 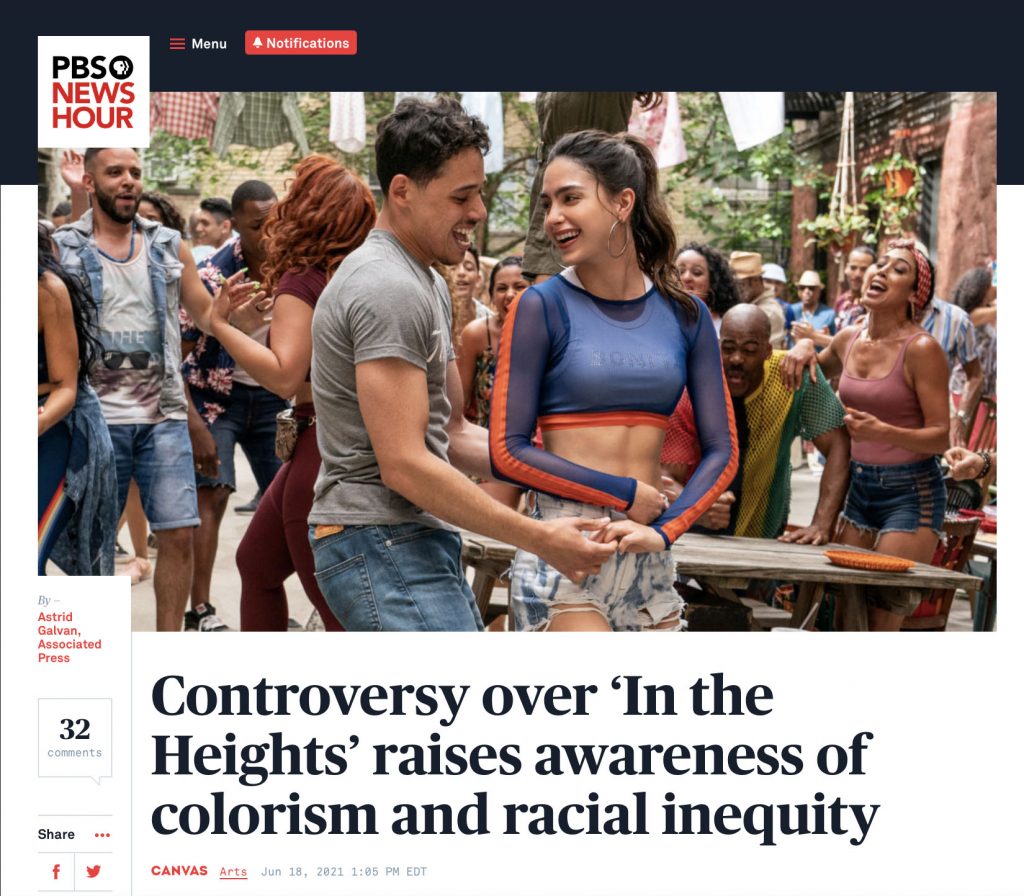 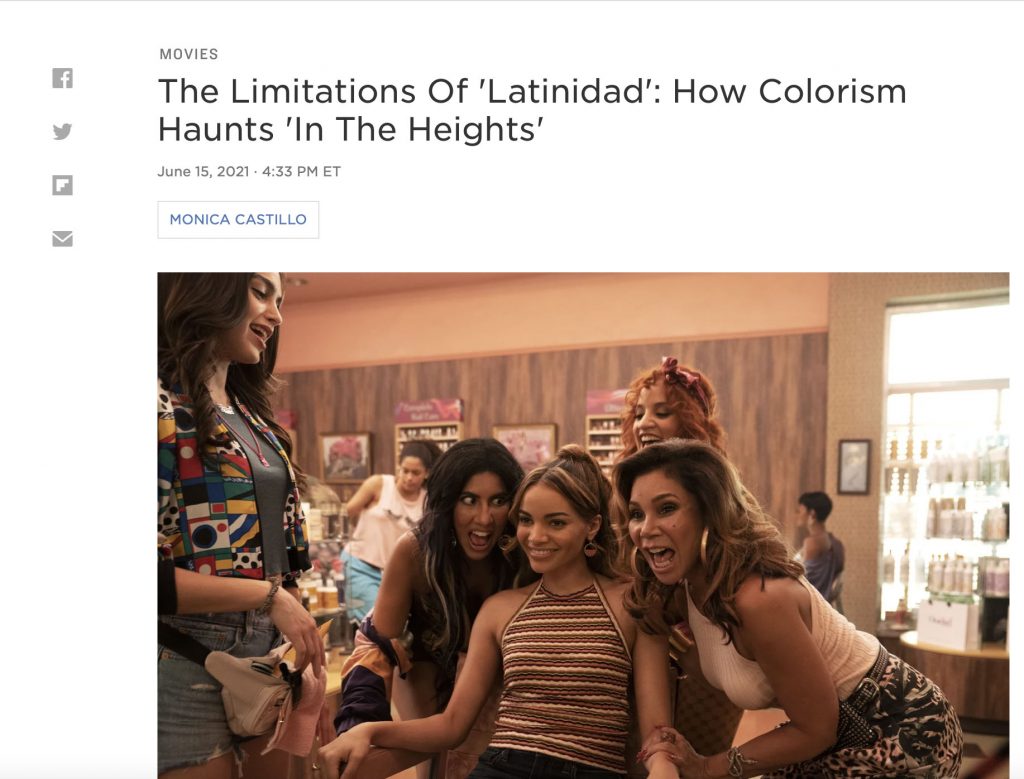 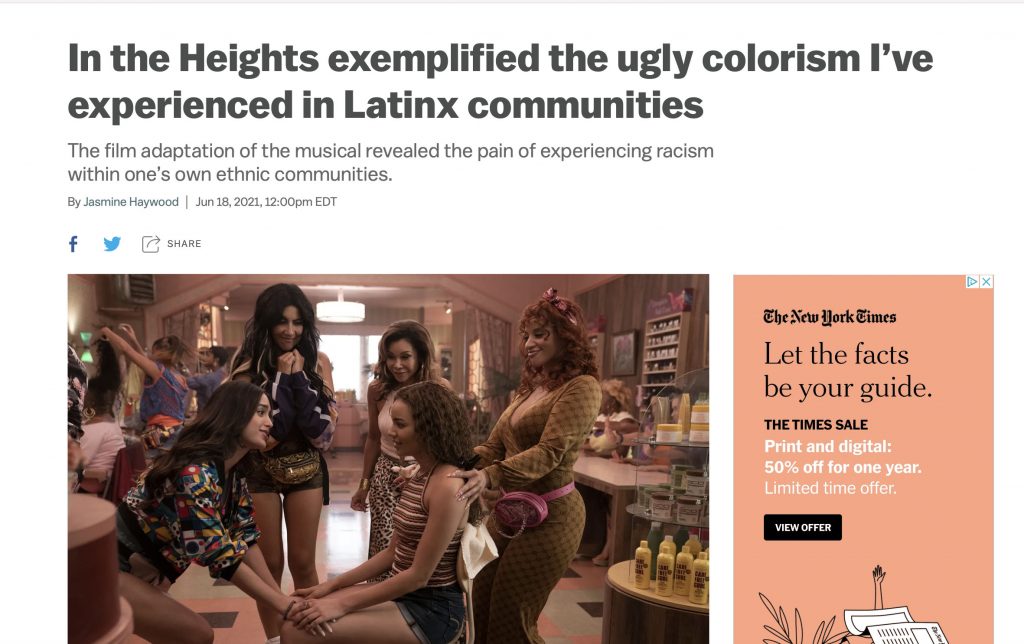 Art cannot survive this moment if we no longer recognize what art is. Art can be defined as:

The expression or application of human creative skill and imagination, typically in a visual form such as painting or sculpture, producing works to be appreciated primarily for their beauty or emotional power.

On the flip side, propaganda can be defined as:

Ideas, facts, or allegations spread deliberately to further one’s cause or to damage an opposing cause.

In the Heights is a work of art and its worth deserves to be measured by that metric. But it isn’t. It can’t be in the current climate. If its disappointing box office didn’t already tarnish its trajectory in the awards race enough, the near uniform tsk-tsking in think pieces on “colorism” certainly has. Of course, I could make a pretty strong case for In the Heights to do really well and then it would land a Golden Globe nomination and do just fine in the awards race. But without the Golden Globes, its chances are uncertain. (Even if the HFPA proceeds with its usual nominations and awards, as, what impact can they have if they are not televised?)

In the Heights is a work of art by an ensemble of extremely talented performers that had to wait an entire year while COVID ravaged the land for their movie to finally be seen. Costumer designers, makeup artists, production designers, and all the other devoted filmmakers waited months until finally they could show the country – and the world – this love letter to Washington Heights.

But after all that, their labor of love has simply become yet another misplaced struggle session in a political movement that has now chosen to go after a film that actually tried to meet the demands of the moment. This is no longer about art. It can’t be.  It is too carefully monitored, and the punishment is too severe for any kind of art to thrive.

Under Stalin, filmmakers, writers and anyone else in the creative arts were “monitored” by committees that decided whether or not their work was compliant or threatening. If it was threatening it would simply be shut down. His draconian legacy extended over the next several decades under Khrushchev and Brezhnev when thousands of writers and artists were shipped off to gulags as political prisoners. We see this play out in China and North Korea even today. That is the only way to further a Marxist-inspired regime. You have to control what people think. You have to control how they think. You have to control what they see and hear and read because the power of art is such that it can change minds, it can open doors, it can launch movements and revolutions. And that makes it threatening.

This is why George Orwell wrote 1984. He wrote it because it is about a system that sells itself as something it is not. Ministry of Truth? Not truth. Ministry of love? Not love. Ministry of plenty? Only for a chosen few. That book is everything that is going on now – where everything from our past, everything we think and say is potentially a threat to established order.

The same generation that prides itself on being non-binary, expressing one’s authentic self and being empowered but the one thing it isn’t? Tolerant.

The good news is that no one here is being thrown in the gulag, tortured or shot on the spot. They are deplatformed. They are still essentially exiled. They are ignored. If they speak out they are hounded so intensely on social media that they are forced to apologize. And the apology, according to Kristen Powers at USA Today is not apologizing or cancellation – it’s taking accountability.

We have to let go of the idea that apologizing is weak. Holding yourself accountable, as Miranda did, is not “groveling.” It’s a sign of character, strength and humility. America has many problems, but apologizing too much ain’t one of them.

She says this is “accountability” and not “cancel culture.” Lady, they’re the SAME THING. What do you think the Democrats and the Left call “Cancel Culture?” They call it, “Accountability Culture.” I call it Salem in 1692. Some of it has been good. It has drawn awareness to things we were ignoring for far too long, and if it has led to a movie like In the Heights being made at all then some of it is good. But we’ve gone past that point now and we’re in the irrational zone.

Rita Moreno meant it when she said nothing is ever good enough. Because you know what? Nothing ever is. Everyone knows this, yet no one will say it. Why? Kristen Powers is why. Twitter is why. This ideology, which rampages across the entire cultural left unchallenged, is why. Not allowing dissent is the problem. This turns the entire industry into a propaganda machine that must adhere to a specific set of rules of ideology or else face the possible end of their careers.

Moreno’s point is razor sharp: “Couldn’t they have just left it alone – just for now? They are really attacking the wrong person.” Film is basically dying on the vine. We can barely put on the fourth wheel and pull the wagon at this point. The Oscars have been pummeled within an inch of their life. There is almost NOTHING LEFT. It is not the Academy’s job to fix what is broken in our society. Their JOB is to honor and reward ART. FILM. CINEMA. And if that is no longer the case, they should pack it in.

I can’t imagine In the Heights being made even five years ago, let alone ten or twenty. It is a massive achievement but for all its brilliant effort it still had problems at the box office. Selling it as an inclusive movie makes some people think they are going to get yet another lecture by Hollywood. And guess what? They don’t want it.  They don’t want the most privileged people in the world telling them how they should think. So the movie struggled, as will all of the inevitable films made to pander to this moment. If they think it is Hollywood trying to foist an ideology upon them, millions of people will not show up. They get it everywhere – the last place they want it is when they are paying their hard earned cash to be entertained.

But In the Heights isn’t that movie. It is full of life, deeply moving, and instilled hope among many. Okay so it didn’t get every representation exactly right and some felt marginalized by that. I get it. I’m not criticizing those who criticized the film for that lack of representation. That’s their right. I am, however, criticizing the media – especially NPR, the New York Times, USA Today and the trades for not offering any sort of balance in their coverage.

They all want–NEED– to be thought of as good. So they’ll force that apology because now they can sleep at night knowing Lin-Manuel Miranda, and everyone involved in the beautiful, glorious film In the Heights, has now been properly shamed and the movie properly dinged to ensure this never EVER HAPPENS AGAIN.

What can possibly survive this? The only late night comedian who has any courage at all to stand up to any of it is Bill Maher, who regularly trends on Twitter. Not Stephen Colbert, not Jimmy Kimmel, and not even Saturday Night Live. People like Rita Moreno are abandoned to twist in the wind until she apologizes! For having done nothing wrong except say what she honestly believed.

And for this, he himself got a lecture by Kristen Powers. Everyone out there knows this is insane and yet, look at the journalists. What are they doing? Hoping to go viral on Twitter. That’s it.

Art cannot survive this moment if we don’t fight for it. We must fight as film critics, as journalists, as fans and yes, as Oscar bloggers.

Granted, I know most won’t risk it. So they pander, day in and day out on Twitter, saying exactly what they have to say and staying silent about what they know to be true but are too afraid to say. None of them will speak up – not the major writers on any website devoted to the Oscars. There are only three of us who will – Jeff Wells, David Poland, and me. We’ve been mostly sidelined by Film Twitter for being too outspoken and never apologizing – which is good and bad. Hey, you haven’t lived until you’ve had a gang of wild-eyed Gen-Zers chasing you around and calling you a “white supremacist.”

Could you ever have imagined that people would be afraid just to say what they really thought about something? That journalists and critics and filmmakers would be afraid? Granted, social media, like the printing press and the radio have wreaked havoc upon our species. Those advancements in communication played a part in creating modern chaos — revolutions, the Holocaust — but they also led to the greatest books ever written and FDR’s fireside chats and the Mercury players. But we have to fight for the freedom to use these tools for the betterment of everyone. So that everyone’s voice can he heard. We have to stand up and say — you are entitled to your opinion and so am I. We have to fight for films like In the Heights because they are rare in a time where movies are becoming fast food.  We have to fight for the right for Rita FUCKING Moreno to say whatever the hell she goddamn well pleases. She has earned that right.

I can promise you that I will hold the line. I’ll never give it up. Humans have needed art since they first figured out how to paint on cave walls. It is as necessary as breathing.  Once it starts serving an ideology, it is like the paintings that were devoted to Christianity and the Church because they had to be. Or art that supported the utopian ideal of Marxism. Or art that supported the fascists in Germany and Italy. No matter how beautiful it may be, no matter how glorious, it can only say one thing. We on the left are coming dangerously close to that.

I get that it’s scary. But you know what is even more scary? A world without art.

Tags: in the heights