Just when you think you know what’s going on with HBO Max’s The Flight Attendant, you think about it a little more and something else is revealed. The comedy series works on multiple levels depending on how you perceive intentions and motivations just like in a glamorous, classic whodunnit. That is also translated in the production design from Sara K White. There is a modern sleekness to all the globetrotting, but the more Cassie breaks the more we discover about the characters’ pasts.

The Flight Attendant features a lot of sleek surfaces and reflecting glass. We initially think that’s it’s just to show how expensive and high-end everything is, but that choice is also steeped in Cassie’s journey. She is an alcoholic who spends a large amount of time thinking of how her actions and behavior are being perceived. It’s almost as if the paneling of a set is staring back and Kaley Cuoco’s Cassie is worried about their opinion about her.

“Working with spaces that are either inherently personal, or are affecting someone in a profound way is the best part of working in production design, and we got to do that on this show. We were able to get into the subconscious of the character and represent it physically, it was a treat. We used reflection, refraction and obfuscation to show that in the suite. Similar themes were explored in other sets, such as in Alex’s family home and his apartment. Being able to explore those themes in a deep way and be supported by the other creators on the show was fantastic.” 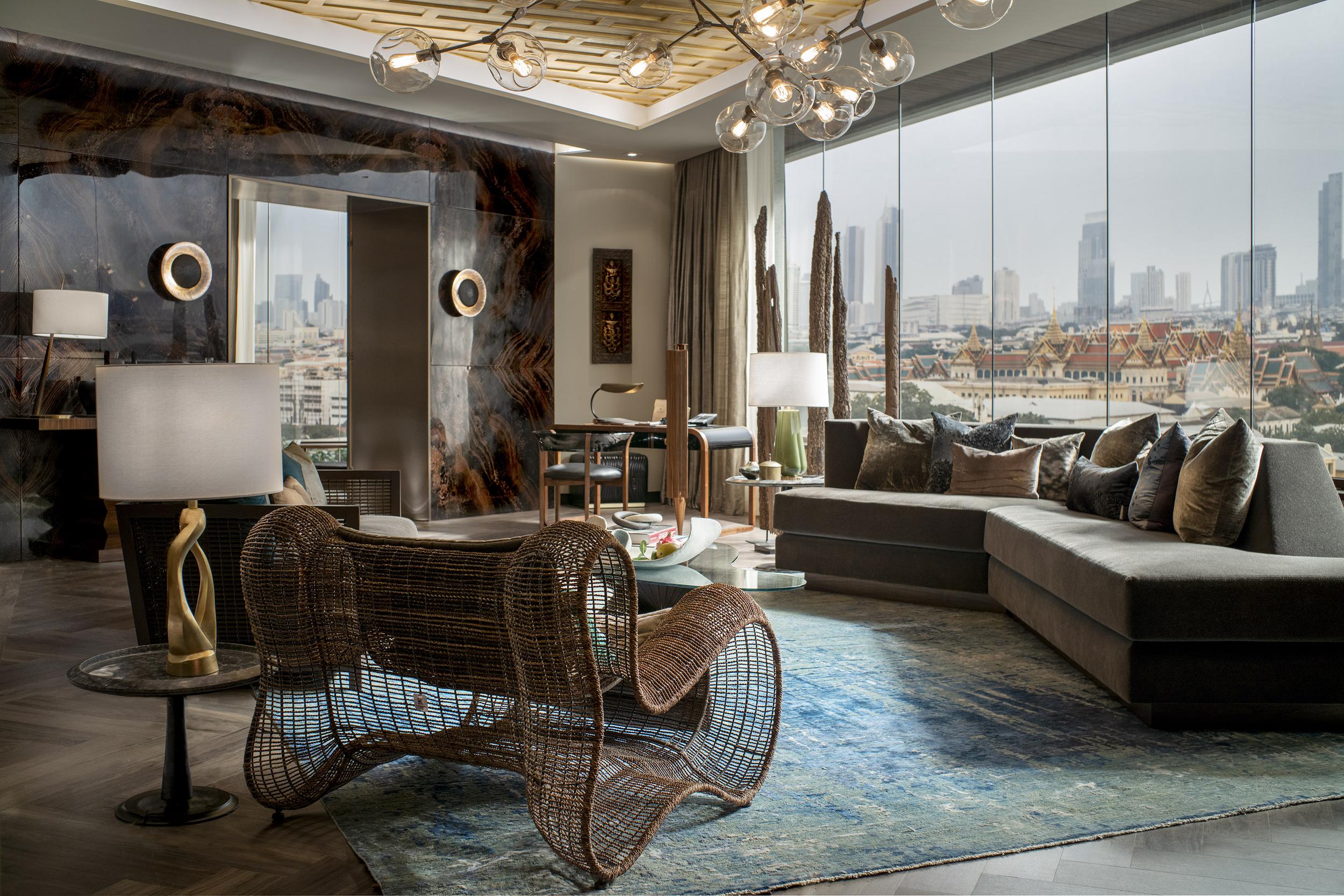 The hotel room in Bangkok is incredibly important because we spend a lot of time there. It’s the scene of the crime but it’s also where Alex and Cassie see their friendship and romance flourish. You want to touch and gaze at everything in this room—it’s so hypnotic and chic. Large windows look over the skyline and the sitting room has a raised ceiling with a modern chandelier. Every piece of furniture looks one-of-a-kind.

“Every time we went back to it, we had to be excited to look at it again. At first, we discussed replicating a hotel room from Thailand here. But very quickly the needs of the room meant we had create it from scratch. The choices had to be right for us in the long term for the season. We needed flexibility for camera, to frame the set and actors in new ways all the time. You’re not going to get that flexibility with a standard hotel suite.”

The floor plan of the hotel room even feels like it flows differently. Much like the themes of the show, the more you explore, the more you discover. It all plays into the strong character choices that the creators of the show incorporate into the designs.

“I started with a design of the floor plan – I took a more classic orthogonal floor plan and broke it apart, playing with symmetry as well as the paths of travel, to keep the options open for the cinematographer. Providing those opportunities was critical, as was amplifying feelings of change and movement with sliding panels and screens.” 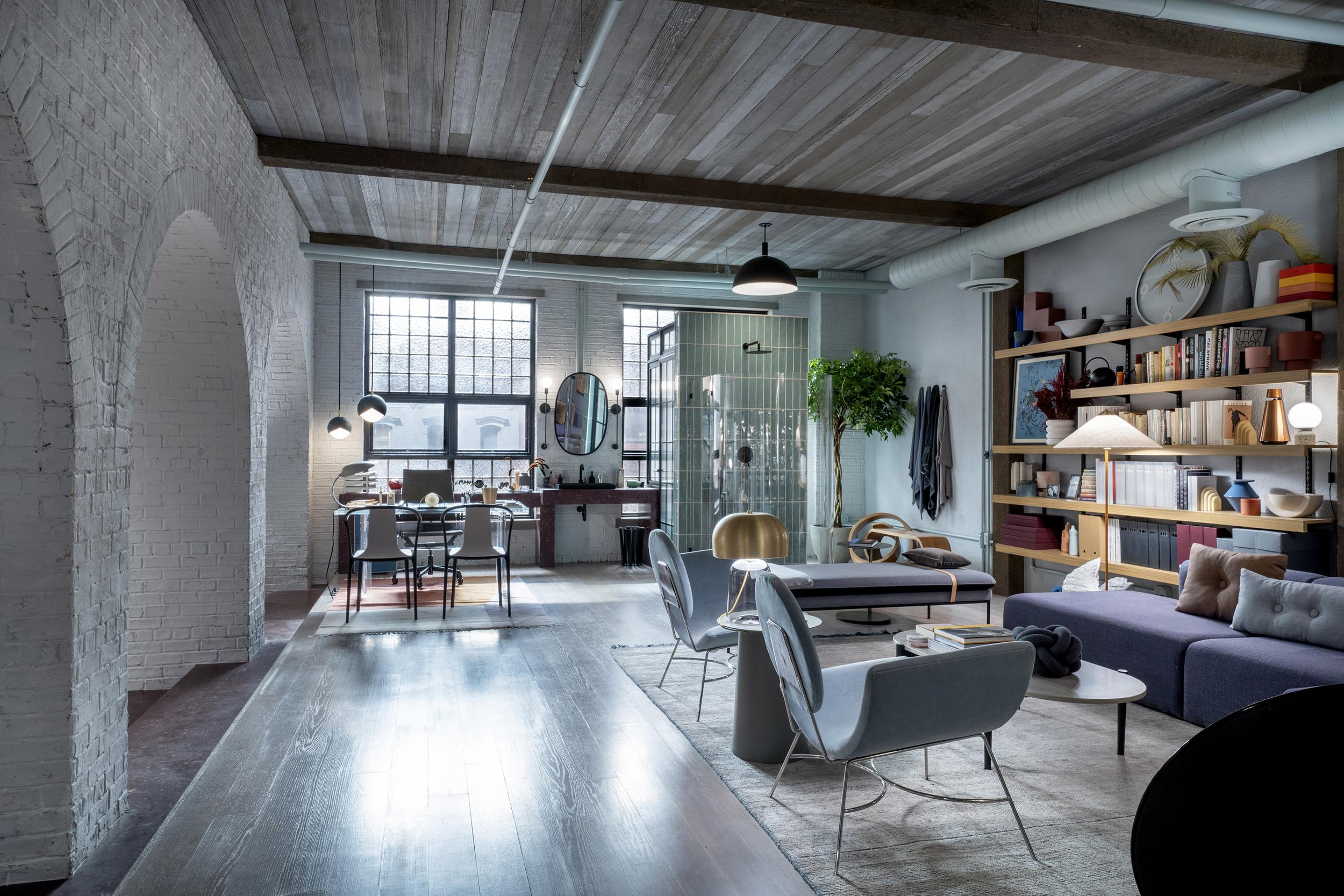 Annie’s apartment looks incredibly different from the small glimpses of Cassie’s living space. A successful, young lawyer, Annie’s apartment is clean and very focused. I personally love the large archways between her living room, office, and kitchen, and it’s almost as if Annie wants to separate those aspects of her life in a very definitive way. The placement of the shower in the living room is a very New York thing, but it’s also reflects what the show does so well. It forces you to confront something when you least expect, whether it be Cassie’s alcoholism or Max’s naked rear when you enter the space. Annie’s apartment is something that White took a lot of care and pride in.

“It’s not crazy to have a shower in a peculiar place in a New York City apartment, but we wanted to turn it into something that was indicative of Annie’s character. When I was talking to the showrunner, Steve Yockey, it was about ‘what is she playing with in this moment? What is she showing us?’ She’s an up-and-coming lawyer, so she’s able to do this intentionally. She’s dealing with lies and truth. Playing with deception, playing with surprise, and managing people’s expectations. She’s constantly  blurring the lines, protecting herself with these power games.”

White also created the look and essence of an entire airlines with the creation of Imperial Atlantic. Much like the hotel design, it is a very lustrous design, but it feels both nostalgic and incredibly modern simultaneously. Flying with Imperial Atlantic would probably be the closest thing you could get to the majesty of commercial flying when it was first introduced. It’s an event and something very special almost as if Pan Am was reincarnated into a singular experience.

“We did a lot of flying on this show going to Bangkok and Rome, so I got to do a lot of research! Working with the name Imperial Atlantic was wonderful, it has such symbolism to begin with. I was able to create something elegant and give that to my team and our costume designer, Cat Thomas, who infused the shape and the look of the logo into every aspect of how we show the branding of the airline. There’s a lot of work that goes into making a cohesive look for an airline. Everything had to be considered, to match the high end experience, down to the look of the napkins and the way they serve champagne – it’s distinct across different airlines. It was exciting to create the whole apparatus for how we present Imperial Atlantic.”

The Flight Attendant is streaming on HBO Max.

Reframe: Do The Right Thing